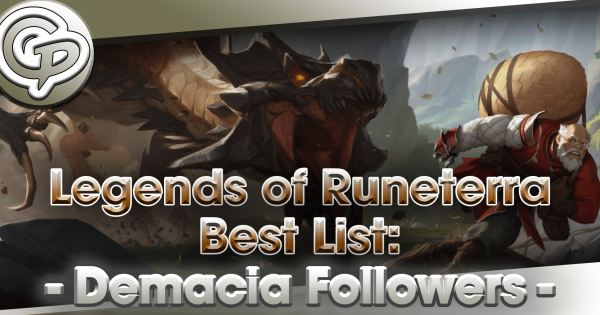 The Great City of Demacia stands for justice and valor against the sorcery of the Rune Wars. Honor runs deep in this flourished military city as Bannermen march to defend the good people within.

Demacia relies on its core midrange game, keeping a solid line of defense with its tried and true legion of beefy Followers; many of which holding their spots in the deck even as more sets are released.

Tier 3, by virtue of being on this list, are still some of the best Demacia Followers but risk falling into obscurity without further support.

Legends of Runeterra enforces players to play on curve with each Region having very defined strategic options for each turn that are geared to sequence together. Demacia's curve has remained consistently powerful since inception, with War Chefs seeming indestructible with how fluid he plays; even post-nerf.

War Chefs is the usual Turn 2 play after Fleetfeather Tracker hits the field Turn 1. The combination of a Supported buff and Challenger that early in the game means the opponent has little Mana to respond with, usually setting the pace for the rest of the match as the opponent is already straining trades.

Demacia's Follower curve from Turns 1-4 may be the most efficient in the game with Fleetfeather Tracker leading the charge.

Although his ability requires another follower to be played in order to activate, Demacia and friendly Regions offer stellar 2 drop options in War Chefs, Brightsteel Protector, and even Hired Gun from Bilgewater; all of which add value to Fleetfeather Tracker's early Challenger. These allies add Barrier, buffs, or further board control, which all but assures a quick step ahead of Demacia's opponents, as being able to select a trade with little to no resistance allows that.

One of the more perplexing Followers to defend against, Grizzled Ranger rewards relentless pressure with the threat of a bigger Follower to replace Grizzled Ranger should he die.

An auto-entry in Scout decks, Grizzled Ranger provides both offensive pressure and bulky defense during the all-too-crucial midgame turns. A true soldier who doubles down in the thick of battle.

Replacing Cithria the Bold in most decks, Genevieve Elmheart adds an overwhelming amount of board damage as well as field control in Challenger and Scout; a strategically cohesive combination as the powerful Quinn/MF deck capitalizes on Scout and Challenger together.

Buffing every Ally by +1/+1 can add up to +6/+6 on board, along with hitting for 5 damage herself twice. This can be a decisive amount of damage, crippling set up boards late game and punching holes in defenses for her troops to storm through.

Another quick and powerful ally for Fleetfeather Tracker early game, as well as a saving grace for more powerful allies late game. Brightsteel Protector is always a welcome draw, and can almost guarantee to trade for his value or higher on the field.

As the meta slows down to make room for bigger finishers, healing effects have become more common. Although a Set 1 card, Radiant Guardian feels fresh in this meta.

Fighting for deck space against Grizzled Ranger, Vanguard Bannerman is still a solid pick if for the board-wide buff at 4 Mana, which is a powerful momentum switch that should nit be ignored.

This card still finds play in Bannermen decks, but those are finally being fragmented with other strong midrange options.

The only Follower to be added to Demacia in Set 3, Screeching Dragon gives Demacia a Dragon to pair with Targon's selection.

While Dragons are not a paramount threat at the moment, their strong mid and late game presence with Fury and direct Type support leaves the door open for a strong Dragon meta in the future as they are still not one to ignore now.

Still a very strong finisher, just outclassed within her own Region against Genevieve Elmheart.

Cithria the Bold used to be stronger, when the meta was full of cheap aggro combatants with low stats, but now that the meta favors midgame and ramp tactics, Fearsome is not as powerful late game, leaving players to look elsewhere to fill her place.

A board-wide buff and keyword assignment is still powerful, and Cithria can still be seen as a finisher for non-Scout Demacia builds, but her inclusion rate is dwindling.

2/2 on a 1 drop used to feel beefier, but with Followers like Barkbeast, Jagged Butcher, and Solari Soldier running around, Cithria of Cloudfield feels underwhelming.

Unless Demacia is running an Elite dedicated deck, Fleetfeather Tracker is the better option.