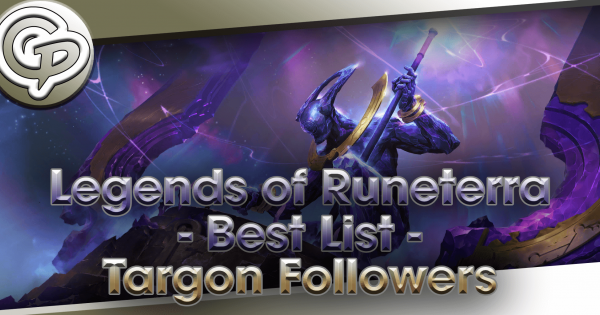 The Rakkor people live at the base of Mount Targon and follow the sun around it on a constant pilgrimage. The monuments to the sun they leave not only serve as a calendar and navigation, but are also deep channels of spiritual faith for the Solari; the extra devout worshippers of the sun from among the Rakkor. Opposite them are those in service of the silvery moon light, the Lunari, who the Solari revere as heathens even though history suggests that they were once one religion. Both pray to the Celestials who mysteriously appear around the crest of Mount Targon.

Mechanically, the Solari and Lunari are defined by their keywords: Daybreak and Nightfall, respectively, which can work separately or together quite easily as they have opposite yet complimentary triggers and effects. The Nightfall set is geared towards decisive critical hits while Daybreak dominates the midrange with tempo plays. Aurelion Sol headlines the Celestial package, which feels like an extra-dimensional Sea Monster deck with its ability to cheat out multiple large, fantastic beasts onto the field. Taric's Gem package provides universal Support and can find himself paired with many Champions.

Tier 3, by virtue of being on this list, are still some of the best Targon Followers but risk falling into obscurity without further support.

Way too much value and early pressure for 1 Mana.The easiest of this class of 1 drops to level, Solari Soldier is a quick 3/3 Leona activation, as well as a surprise Lunari ally as Nightfall prefers low cost cards to activate their abilities efficiently, and a 3/3 body for 1 Mana is incredible value. There are very few reasons to not include this card in any Targon deck.

Arguably the best Invoke value, Solari Priestess plays a body on board and replaces herself in hand with a choice of a 4, 5, or 6 cost Celestial Follower to continue playing on curve. Invoke is powerful because it gives the player a choice on the fly, which greatly reduces the pressure on slower, more rigid ramp decks which may not usually be nimble enough to keep up with early threats.

A 2 drop whose value maintains throughout the match, Solari Shieldbearer keeps tempo with Solari Soldier, forming a defensive line that can easily contain anything played within the first three turns, or hold the line with 6 Health against bigger opponents later in the match.

A cheap Elusive Nightfall on a solid body. Easy offensive quick play with Solari Soldier, and cheap enough to be safely reserved until the end of a turn. Lunari Shadestalker is usually seen with Crescent Guardian as the most common Nightfall allies, although Shadestalker usually has an easier time staying on the field.

A late game wall breaker and finisher, Infinite Mindsplitter Stuns 2 enemies at the start of each round. This monster of field control gets to select those targets, unrestricted, which also locks that bench spot if the bench is not yet filled, or a Champion is Stunned and kept alive, as any new Champion drawn will become a Champion Spell. This ability sets up a tremendous offensive swing on an 8/8 Fury body, and is often the deciding play in a match.

Leona's finisher, Rahvun makes sure Leona always has access to Daybreak. Between the Solari's buffs and Leona's constant Stun Skill, it's easy to see why Rahvun was designed to be the capstone play for Leona and the Solaris.

At 5/5 for 5 Mana with a beefy ability, Rahvun feels like an economy finisher with premiere value.

An essential 1 drop to Nocturne/Diana, Duskbringer provides 2 chances to activate Nightfall for 1 Mana,and the second activation has a net cost of free. Doesn't get much more efficient than that. While a more than essential player for Nightfall decks, Lunari Duskbringer lacks the universal value that his Solari counterpart, Solari Soldier, provides to decks which may or may not care about the latter's keyword.

Mentor of the Stones -

Once again, this card has a lot of value between Support and Last Breath. Mentor of the Stones is a must have in any deck which uses Gems. The issue with Mentor is he is very susceptible to Silence effects, which have become much more common and leaves Mentor of the Stones as a 3 drop 1/1.