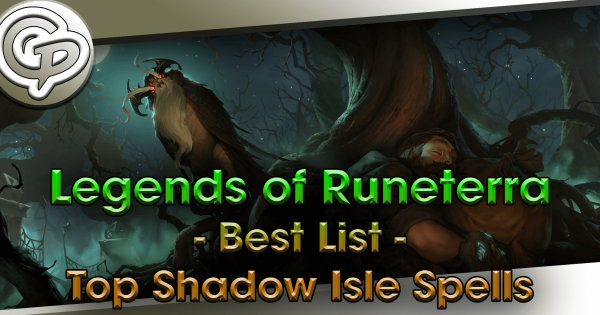 The Shadow Isle Region is home to the darkest magic in Runeterra, inspiring those themes in its entry in the digital card game arena. The Shadow Isles Spells are characterized by direct Follower removal and self-sacrifice for massive damage. Shadow Isle provides value gaining Last Breath and easily multiplied Ephemeral Followers as fodder for some of the most powerful Spells in Legends of Runeterra.

Tier 1 is reserved for Spells whose value far exceeds their cost. As we believe that Legends of Runeterra is still an incredibly fair and balanced game, Tier 1 is very exclusive.

Tier 3, by virtue of being on this list, are still some of the best Shadow Isle Spells but risk falling into obscurity without further support.

If one in the hand is worth two in the bush, then Glimpse Beyond is double that. This card is the definition of value and a universal staple across all Shadow Isle decks. Not only does Glimpse Beyond have utility -- many times being used to sacrifice a doomed Follower to prevent an effect or trigger Last Breath on any of the numerous available in the Shadow Isle -- but drawing 2 cards is a universally powerful skill across any card game. Glimpse Beyond finds itself in so many decks because of its versatility and sheer value for 2 Spell Mana.

Hailed down from The Call of the Mountain comes a direct upgrade to Vile Feast; a card which found itself included in 85% of Shadow Isle decks, and another beacon of value.

Any card which creates another card already has value because it replaces itself, even moreso when a 2 drop Burst can create a higher value Follower than a 1/1 Spiderling, although there is something to be said for Vile Feast immediately summoning a Follower to play. Even considering that,  in most cases, Unspeakable Horror is a direct upgrade unless Elise is your Champion.

The fundamental importance of draw power in any card game cannot be understated. Not only does Stalking Shadow draw a card, it allows you to pick which Follower is drawn, and then copied in your hand as an Ephemeral.

This does wonders for play consistency as well. The ability to copy abilities of chosen Followers enforces your own strategies in a universally effective manner means Stalking Shadow is likely to see play in Shadow Isle builds for a long time.

Deceivingly versatile, as with most Shadow Isle cards, the self-sacrificing nature of this Spell offers Last Breath interaction as well as dealing powerful, varying damage. Shadow Isles offer some of the best single target removal, with Atrocity as a prime example. It should be mentioned that without enough Followers to sacrifice, Atrocity becomes a dead draw, but that is rarely the case with the abundance of Spiders, Ephemeral, and Last Breath Followers available to this Region.

More importantly, Atrocity's Fast casting speed means that it can be used on defense rounds to be played on top of the stack to win the game. Atrocity is most feared as a quick, unexpected finish to a match.

Grasp Of The Undying -

An up to 6 Life swing for 5 Spell Mana already seems like a happily weighted deal, but giving this Spell Fast priority is nearly overkill. Grasp of the Undying pairs nicely with Neverglade Collector to provide offensive Shadow Isle builds, such as Nightfall and Ephemeral, with some much needed bulk.

The bane of midrange decks, The Ruination is an all-or-nothing strategic swing gambling on your deck's ability to recover quickly -- or upgrade an army of The Undying. This jarring shift in momentum is more often than not the deciding factor in matches in which it's used.

Simply KO'ing a Follower without restriction is such a fundamentally powerful ability that will never go out of style. It's worth every bit of 7 Spell Mana.

Another momentum shift, although not as damning as The Ruination. Withering Wail pokes the entire opposing bench for 1 Damage as well as healing the Player's Nexus by 3, which can be useful for softening up a threatening offense or quickly sweeping up crippled Followers for a big attack.

While a heal is always welcome, the board wide single damage poke is not as meaningful as the meta has shifted away from legions of low cost aggro Followers and towards large threats, many of them carrying Regeneration or just simply go unphased by 1 damage.

A fickle card that can be the difference between victory and defeat. When played in the right conditions, it can ensure the survival of key Followers and Champions into the next round, although the probability to randomly revive a more benign Follower who has also died that round is high enough to mention.

Mostly found in Mistwraith builds, which got a little support in the Call of the Mountain update, Mist's Call is a situationally powerful card.