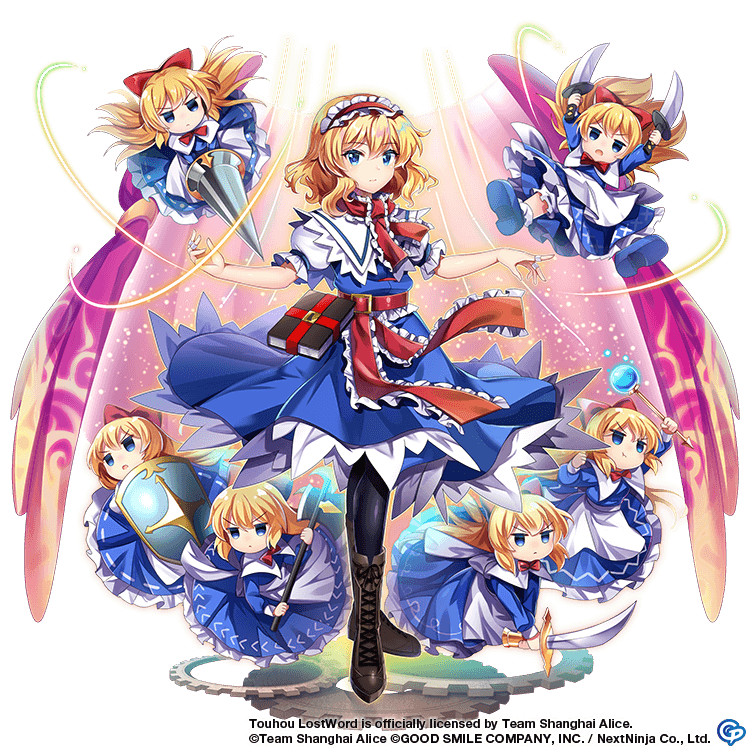 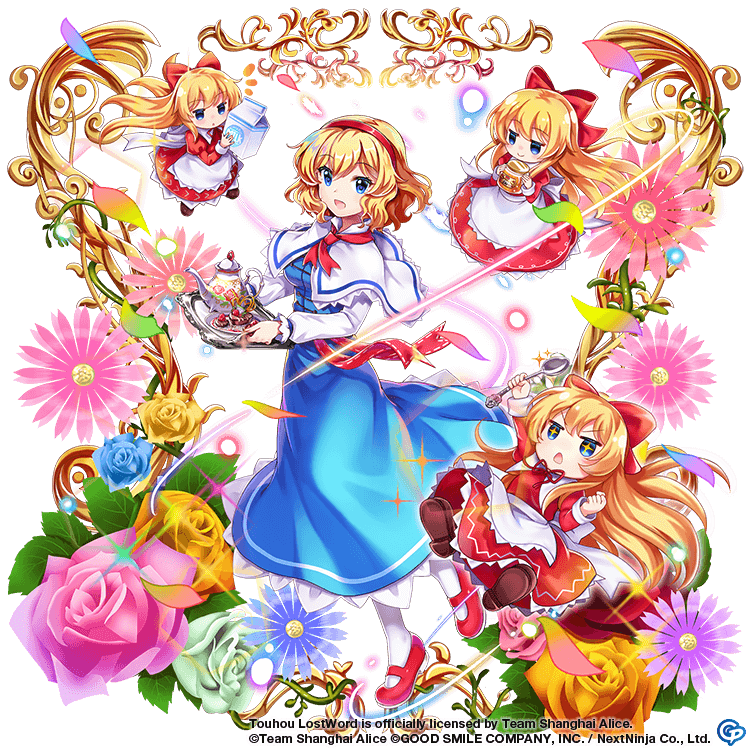 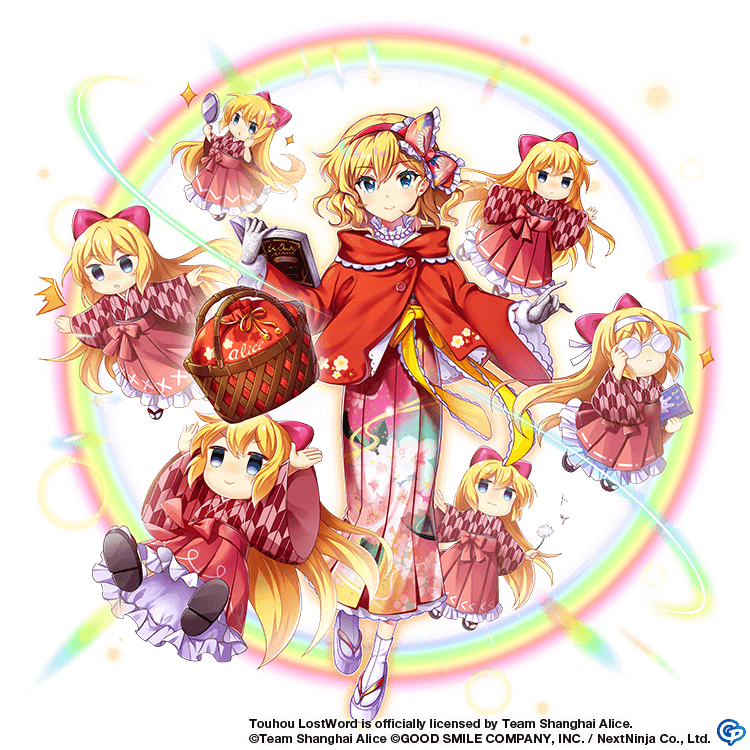 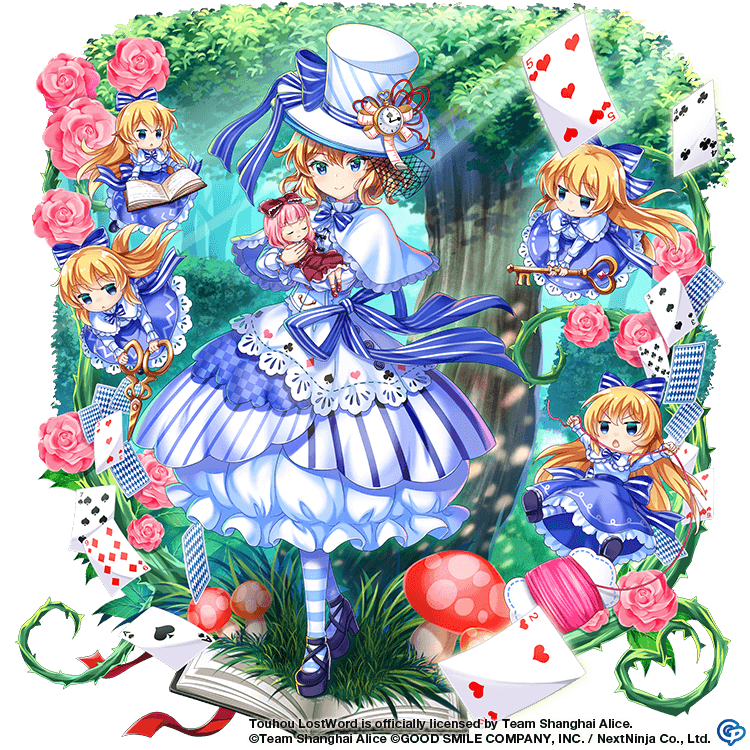 Alice Margatroid's Spread Shot. She shoots out a barrage of red light bullets. Some say it is similar to Marisa's missiles―perhaps they have been exchanging ideas.
Shanghai Doll

Alice Margatroid's Focus Shot. Alice's Shanghai Doll is one of her favorites and is top class, showing up with Alice often. The doll looks very cute, but the lasers she shoots out are incredibly powerful. 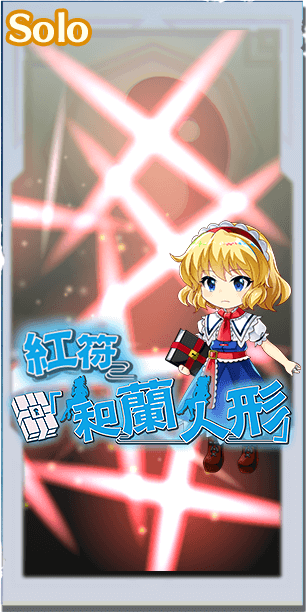 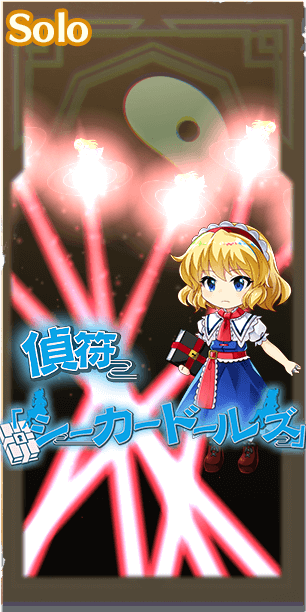 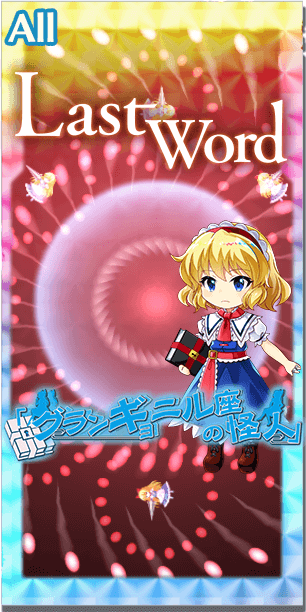 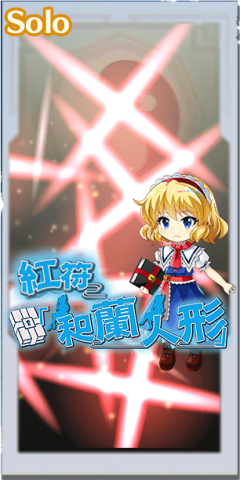 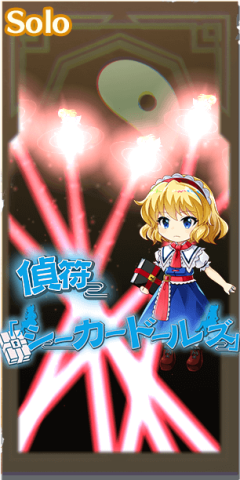 Alice Margatroid's Spell Card. It features a fearsome barrage of dolls who seek the target out with lasers. It would be difficult to escape this squadron of puppets...
*Pre- and Post- effects assume max level. Effects per level can be viewed here.
Pre-Attack Spell Card Effects 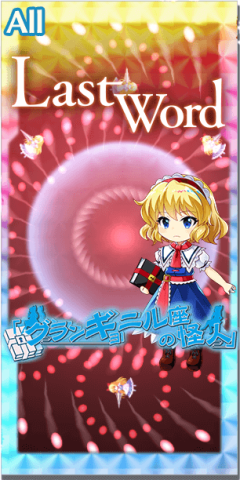 Alice Margatroid's Last Word. This bullet hell attack showcases Alice's puppet theater. She controls a large number of dolls simultaneously and encircles her target with them. It creates a grand stage, but the performance is a cruel tragedy... and the target of the attack is the starring actor.
*Pre- and Post- effects assume max level. Effects per level can be viewed here.
Pre-Attack Spell Card Effects

Alice Margatroid was released on May 11th, 2021 as part of the starting roster.

The Seven-Colored Puppeteer, Alice Margatroid is a magician who lives in the Forest of Magic. Not to be confused with a human magician, such as Marisa, Alice has surpassed her mortality and become a species of youkai also known as magician - yes, it’s confusing, youkai are weirdos. She specializes in manipulating dolls to fight on her behalf, tailoring her power output to match her opponent, as losing at full strength would be an irreparable blow to her ego. She also performs puppet shows for the human village, and spends her time attempting to achieve her life’s work: a fully sentient doll. While she hasn’t quite achieved that feat yet, she’s still got plenty of talent to show for it, ready to have her dolls perform as a B-Tier Friend.

For farming purposes, Alice requires setup time, and shines more at Solo stages in spite of her All targeting Last Word, due to the Solo targeting DEF DOWN on her Spell Cards. Still, she can do a decent job of it, if you're willing ot give her the time she needs.

For harder fights, Alice shines. First of all, if all you need is some extra firepower to blitz past a stage, Alice has plenty to offer before tagging out: Her third skill gives enough Accuracy up for most attacks to be perfectly accurate, which allows her allies to use whichever Story Cards they’d desire if they lack Accuracy Up in their own kit, with 2 Levels of Yang ATK Up to boot. If you’re willing to have her stay in for 1 or more turns, she can provide even more support: Her Character Ability will allow her to also boost your team’s Yin ATK for a burst turn, both of her Spell Cards provide 3 Turns of 2 Levels of either Yin or Yang DEF Down to a single target, and if you need even more accuracy (such as for a Crit team), her Last Word can provide 2 Levels of Evasion Down to all targets - just as good as giving your whole team 2 more Levels of Accuracy Up, including whoever Alice swaps out to!

Whilst that’s a robust set of support, it’s not without its flaws. Her DEF Down Spell Cards only either lower Yin or Yang DEF, only against a single target, and being Spell Cards they require a turn to execute, making them somewhat slow and inflexible. Likewise, her additional Accuracy support being on her Last Word and her Yin ATK being on her Character Ability means that she will require a turn to provide this support, with the Yin ATK support needing longer lasting Yin ATK buffs to last for more than a turn (If a buff with a shorter duration is added to a buff with a longer duration, their Levels are added together and the longer duration applies). She also can’t make much use of her own buffs, as her personal damage output is somewhat low. Lastly, she has a complete lack of Barrier Breaks in her kit, meaning she will never be able to contribute to Full Breaks.

Still, Alice has plenty of strengths, and she’s well worth bringing to harder fights. Be it using her Skill 3 and immediately tagging her out for some quick Accuracy support, or keeping her in for some additional DEF Down, Accuracy, and/or Yin ATK Up support, she’s got plenty to offer, providing a puppet show that’ll floor your opponents out with awe. Or with lasers.

As Alice's Spell Cards do not need to hit to provide the DEF DOWN debuff and have no Barrier Break capabilities, she has no use for most Story Cards. Midnight Tea is pretty much her best option, as it serves as a Yin ATK + Yang ATK stat stick for her Last Word, and provides her with Spirit Power to make it hit even harder. If you have a spare copy, and intend to have Alice use at least two Spell Cards before her Last Word, any YIN ATK UP card such as Overwhelming Firepower, will allow her Last Word to hit harder.

Alice's Last Word doesn't need to hit to apply its Evasion DOWN, and it's unusually accurate as an attack as well, with half the Bullets never missing. Thus, you will generally prefer boosting its damage output - Puppeteer & Necromancer is her best option there, due to giving either 50% or 100% more damage based on the bullet. Otherwise a Yin ATK UP card such as Overwhelming Firepower, is her best option to maximize its damage output.

+ Skill 3 is enough to make her teammates perfectly Accurate, with some Yang ATK Up to boot
+ She also has additional Evasion Down, Yin ATK Up, and Yin / Yang DEF Down support