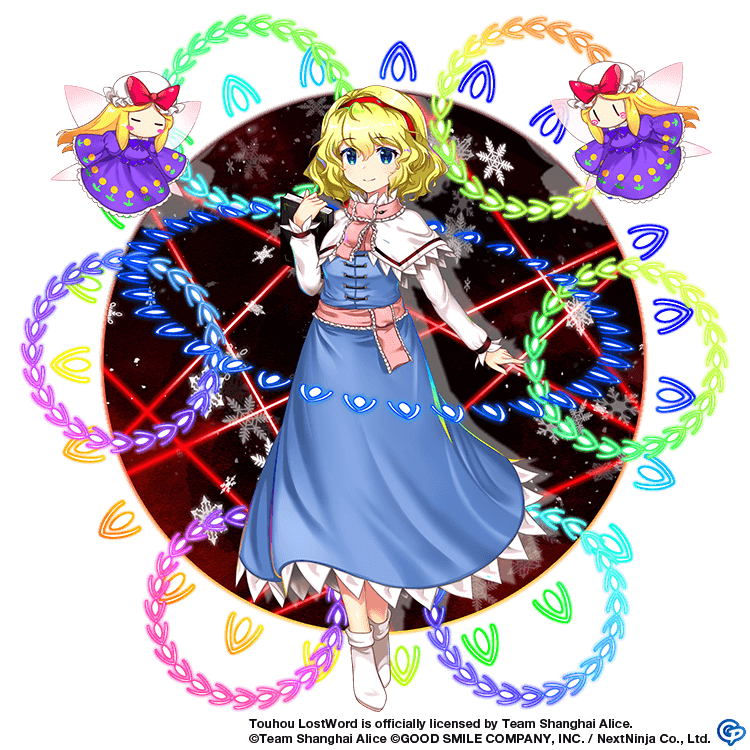 The Spread Shot of Alice Margatroid from the world with a never-ending winter (a Touhou LW original). In this attack, Shanghai dolls and Hourai dolls shoot bullets. It is hard to distinguish which of the many dolls owned by Alice are Shanghai dolls or Hourai dolls. However, Alice, the creator of the dolls, can probably distinguish between all the dolls, even those that look similar. All of her dolls are very cute.
Orleans Doll

The Focus Shot of Alice Margatroid from the world with a never-ending winter (a Touhou LW original). In this attack, an Orleans doll shoots bullets. It is hard to identify which of the many dolls owned by Alice are Orleans dolls. But since they bear the name ''Orleans,'' they are probably French dolls resembling a certain holy maiden. 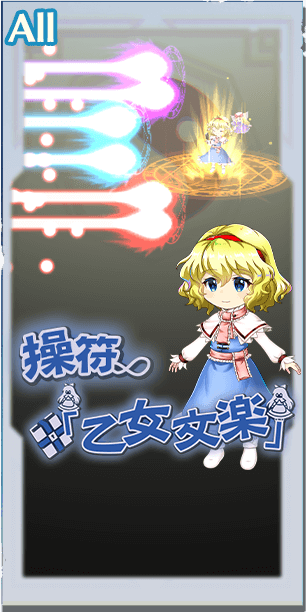 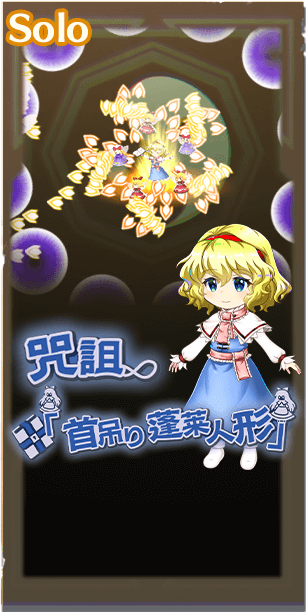 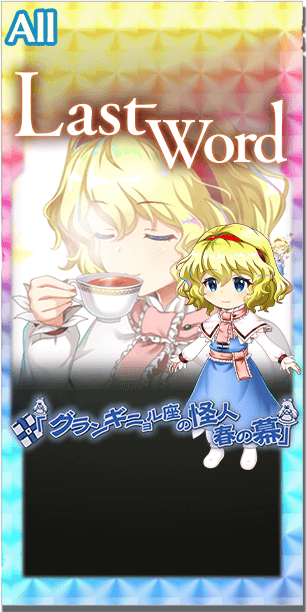 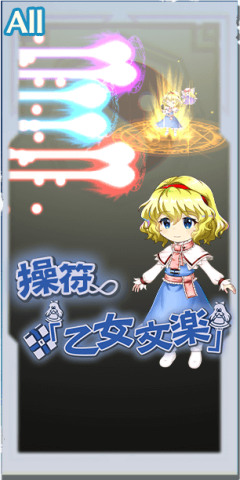 A Spell Card of Alice Margatroid from the world with a never-ending winter. In this attack, she aptly uses a variety of bullets. Alice is a magician who prefers to use dolls, although she can use magic without them. She manipulates her dolls using magical threads that the naked eye can't see. The dolls move about so energetically that it's like they're acting independent of Alice's will. In the type of Japanese puppet theatre called Otome Bunraku, three people manipulate the one puppet. However, Alice can manipulate multiple puppets simultaneously by herself, so you could call her technique the ultimate development of Otome Bunraku.
*Pre- and Post- effects assume max level. Effects per level can be viewed here.
Pre-Attack Spell Card Effects 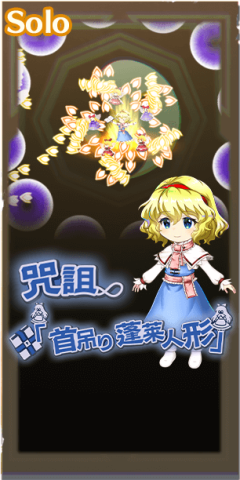 A Spell Card of Alice Margatroid from the world with a never-ending winter. Not much is known about this attack, except for the fact that it uses Hourai Dolls. Hourai is a paradise for the divine once believed to exist in the far east. It is sometimes considered an island, but it is also considered a mountain, one of the three sacred mountains. There are books in China that describe how people were sent on a journey to find Hourai to obtain the elixir of immortality, but no one brought back the real elixir. Come to think of it, there is also a legend in Japan of someone who came from China in search of the elixir.
*Pre- and Post- effects assume max level. Effects per level can be viewed here.
Pre-Attack Spell Card Effects 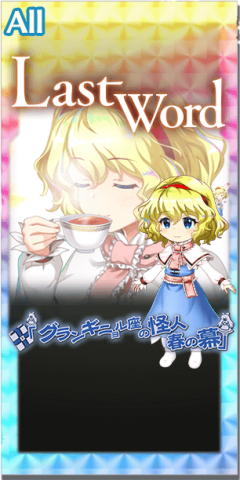 The Last Word of Alice Margatroid from the world with a never-ending winter (a Touhou LW original). This attack is a puppet show about an earnest wish for spring to come to the world of the living. This Last Word is slightly different from the Alice of our world's Last Word. She developed this attack during the never-ending winter incident. She recreates a regular spring in a limited area by using lots of cherry blossom petals in her performance. Alice probably wants to perform puppet shows to her little guests under the warm sunshine once again.
*Pre- and Post- effects assume max level. Effects per level can be viewed here.
Pre-Attack Spell Card Effects

A7 Alice Margatroid was released on May 16th, 2022 in Festival: Teatime With an Old Friend.

During the Spring Snow Incident, Reimu Hakurei, Marisa Kirisame, and Sakuya Izayoi searched all over Gensokyo for the culprit behind the endless winter. Their hunt took them to many places, eventually leading them to the Forest of Magic, and Alice Margatroid’s residence. As a familiar face to Reimu and Marisa (but a new one to Sakuya), Alice hints that she might know about the mastermind behind the incident. However, before revealing anything, she fights the incident resolvers for no particular reason (it is Gensokyo, after all). She brags that Reimu’s power is only 28.571% as powerful as her own, comparing the pitiful 2 colors Reimu wears to the 7 colors that Alice commands. As a blast to the past, Alice Margatroid (Cherry Blossom) brings back this fighting style to boost herself to the status of an S+ Tier Friend.

Heavily differing from the supportive role of her L1 form, A7 Alice is a lot more aggressive, assisting herself in terms of farming as well as challenging content. Her raw damage output is a lot higher now, thanks to heavy Yin ATK self-buffs, seen from her first spell, Puppeteer’s Sign: Maiden’s Bunraku, by 3 levels (3T) and her Last Word, Spring Act - The Phantom of the Grand Guignol, by 4 levels (2T). The Last Word’s pre-ATK effects also increase her Agility by 2 levels (2T), along with her third skill, Kyoto Dolls, buffing her own Agility by 3 more levels (3T). This helps her squeeze out even more damage thanks to her pretty high Slice scaling. Thanks to this offense-oriented kit paired with some nice Killer bullets, Alice can find herself farming many good stages.
Solo Story Card Farms: 2-7-1, 3-3-3, 3-6-3, 3-11-1, E9, Future Story Card Stages

As for challenging content, Alice can bring out a lot more than just damage. Her second spell card, Malediction: Hanged Hourai Dolls, is a great defensive debuff on one opponent for Yin DEF and CRIT DEF, lowering both by 2 levels (3T). This can get even more levels DOWN on the 4th through 6th bullet lines, although it is RNG if the effects occur (but are still rather high). In a similar sense, Puppeteer’s Sign: Maiden’s Bunraku and Spring Act - The Phantom of the Grand Guignol can buff her offensive stats, with an 100% chance of Agility UP on the former’s 5th bullet line and 100% chance of Yin ATK UP on the latter’s 2nd bullet line along with 100% chance of all targets’ Yin DEF DOWN on the 5th bullet line. Going along with the theme of debuffs is her second skill, London Dolls, which applies 2 layers of Paralyze and Burn anomalies on a target. Both of these can be broken by Puppeteer’s Sign: Maiden’s Bunraku, with Paralyze anomalies breaking at 2P and Burn anomalies at 3P. This gives her 4 easy anomaly breaks right off the bat as long as the enemy is not immune to either anomaly, and this does not even consider how she can synergize with other Friends with Paralyze and Burn anomalies.

And don’t worry, Alice is nowhere near done being strong on the barrier breaking side of things. Not only does each spell bullet line have an element, but as the master of 7 colors, Alice shows off the ability to break 5 elements (...that doesn’t really add up…). She gets 2 breaks of Water, Fire, and Wood off Puppeteer’s Sign: Maiden’s Bunraku, 3 breaks of Earth and Metal off of Malediction: Hanged Hourai Dolls, and 1 of each of the elements mentioned before as well as an extra Wood break from Spring Act - The Phantom of the Grand Guignol. This doesn’t even mention the 0P Metal she has on her Focus shot, Orleans Doll, in the cases that you’d need to spam Metal breaks. Alice can gain the Spirit Power for these attacks at a decent pace, thanks to Kyoto Dolls providing 1.00 Spirit Power and even her third characteristic, Tibetan Dolls, having an 80% chance of providing 0.25 Spirit Power each turn. One main drawback from these spread of elements is that having so many elements on one spell, especially seen from Puppeteer’s Sign: Maiden’s Bunraku and Spring Act - The Phantom of the Grand Guignol can make it difficult to avoiding hitting elemental resistances or only hitting weaknesses.

Another major weakness that holds Alice ever so slightly back is her team utility. Although she can work well from a supporting team, she can’t really give much back to them in terms of buffs. Her only two buffs that are teamwide are 2 levels of Agility UP (3T) from her first skill, Dutch Dolls, and 2 levels of Yin ATK UP (2T) from Kyoto Dolls. Even if you count the defense debuffs from Malediction: Hanged Hourai Dolls, the support that this Alice can provide is rather low. At the very least, all of these buffs, both for herself and for the team, last rather long, meaning her little utility is going to still help throughout a longer scuffle.

Overall, A7 Alice Margatroid takes a much more aggressive role than her base form- and definitely for the better. Her combination of devastating Yin ATK and Agility buffs for high damage, easy access to 5 different elements, and even some miscellaneous utility from defensive debuffs and anomaly breaks makes this youkai magician one to definitely not mess with. She does make rather good tea though, so don’t be afraid to visit her!

The Slice scaling and secondary effects for Alice’s attacks are as follows:

Every Friend benefits from extra Spirit Power, especially one such as A7 Alice with so many elemental breaks and secondary effects behind additional bullet lines. Witch of Scarlet Dreams is your typical top pick for this slot, although Midnight Tea gets a shoutout here for being a Yin ATK stat stick to make her Last Word stronger. Of course, any Spirit Power restoration in general works fine here. Puppeteer and Necromancer is really only here to buff her second spell, Malediction: Hanged Hourai Dolls, due to its nature of being made up of half-Light bullets and half-Sharp bullets. It also serves as a great Yin ATK stat stick once more. If you lack these cards and/or need further buffs on other slots, try for Agility UP or maybe CRIT ATK UP due to her Killer bullets. Yin ATK UP won’t do much here, Alice can already boost that to a maximum of 10 levels by herself!

Heavy Bullet power 50% UP on a Last Word that is purely Heavy Bullets is already good enough to ensure The Secret God of the Sky this slot. However, its 2 levels of CRIT ATK UP (1T) serve as a good burst of additional damage if you are hitting the Killers on Alice’s Last Word.

Kyoto Dolls, her third skill, is definitely the first to prioritize, giving Alice 0.5 extra Spirit Power to have 2.00 Spirit Power on turn 1 as well as 1 extra level UP in Yin ATK and Agility. Next up to prioritize is her first skill, Dutch Dolls. This skill is pretty ridiculous, having a 3-turn cooldown at level 1 with buffs that last for 3 turns, making these buffs very spammable! Maxing its level just ensures that Alice will have permanent Accuracy and Agility buffs up. Her second skill, London Dolls, might be last to prioritize but is definitely not bad, giving Alice an extra anomaly infliction of each element to both help with anomaly breaks and Yin debuffs via Burn anomalies.