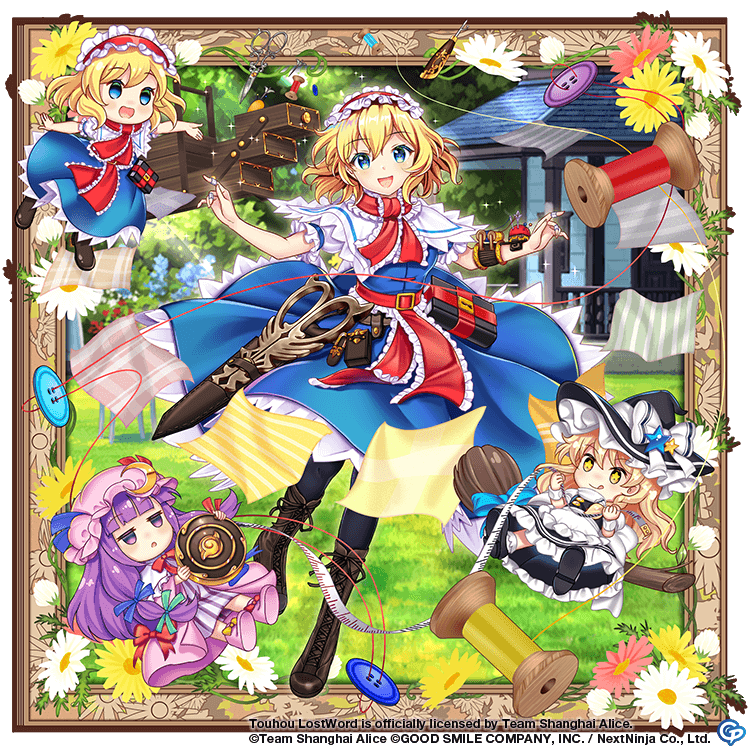 The Spread Shot of Alice Margatroid, who has almost reached the end (a Touhou LW original). She uses her magic sewing kit to stitch her target. Magic threads are invisible, so all that can be seen is an afterglow. If this attack was made with a normal thread, it would probably hurt, and that's all. But Alice can manipulate these threads at will... so what happens to her target after this attack?
Hearsay Chain Stitch

The Focus Shot of Alice Margatroid, who has almost reached the end (a Touhou LW original). She uses her magic sewing kit to stitch her target. Magic threads can be used for things other than combat. Their primary function... is to transmit power. This is an incredibly clever form of magic that lets the caster know about the target they stitched and feed information about themselves to that target. 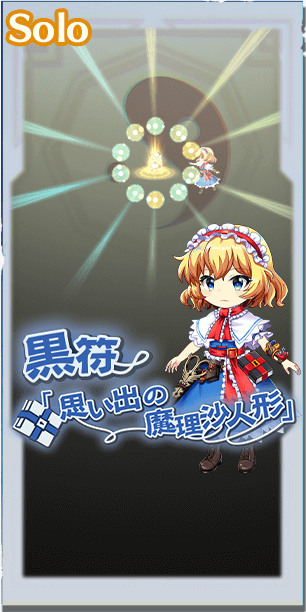 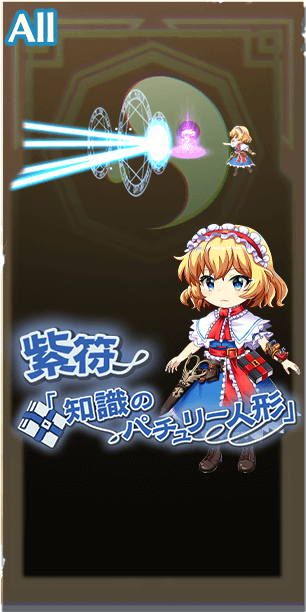 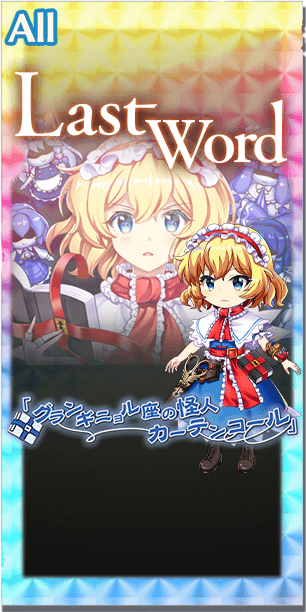 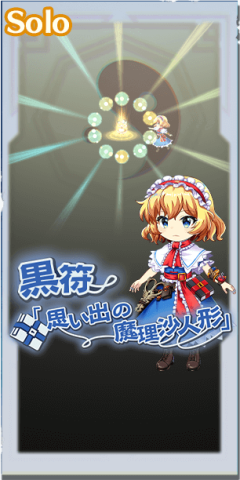 A Spell Card of Alice Margatroid, who has almost reached the end (a Touhou LW original). She releases the memories stored in her Marisa doll as bullets. Her memories with Marisa have been restored, but they are still incomplete. Alice spent an incalculable amount of her proper time reclaiming them. Alice couldn't stand not being able to remember that firepower-obsessed girl who always works so hard in vain.
*Pre- and Post- effects assume max level. Effects per level can be viewed here.
Pre-Attack Spell Card Effects 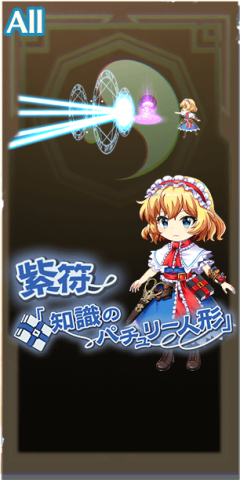 A Spell Card of Alice Margatroid, who has almost reached the end (a Touhou LW original). She releases the memories stored in her Patchouli doll as bullets. Her memories with Patchouli have been restored, but they are still incomplete. Alice spent an unimaginable amount of her proper time reclaiming them. Alice couldn't just pretend that her tea party friend, who rarely goes outside and always spouts armchair theories, never existed.
*Pre- and Post- effects assume max level. Effects per level can be viewed here.
Pre-Attack Spell Card Effects 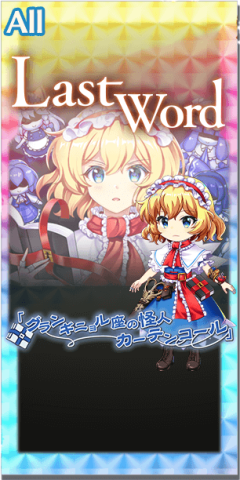 The Last Word of Alice Margatroid, who has almost reached the end (a Touhou LW original). All the memories stored in her dolls appear together and bow to the audience. The Grand Guignol refers to a giant finger puppet as well as a human. From this Alice's perspective, dolls are fake humans while simultaneously being real humans. However, there is absolutely no meaning in concepts such as ''fake'' or ''real'' since the whole purpose of magic is to manifest that which you believe.
*Pre- and Post- effects assume max level. Effects per level can be viewed here.
Pre-Attack Spell Card Effects

For farming, Alice is among the more capable options in the game. Thanks to her Last Word, The Phantom of the Grand Guignol - Curtain Call, Alice can deal a great deal of damage to all her enemies. Her bespoke Story Card, Sporadically Margaret, augments the power of her last word even further. Thanks to her skills, powerful Last Word, and a story card that is catered towards her, Alice can farm nearly all story cards to date with relative ease.

In challenging content, Alice takes the role of either a supporter or a damage dealer. However, her skills nudge her towards a more supportive role.With her 1st skill, Sorciere de la Foret, she inflicts 3 layers of paralysis anomalies to herself. She also gives 2 barriers and .8 P to the party to enhance their survivability, breaks, and damage. Alice’s ability, Capable of handling dolls (Lost), boosts her power with each level of paralysis, providing a nice level of synergy with the self-inflicted paralysis from her first skill.. Her 2nd skill, Devildom Being, provides her with 1.2 P which when combined with her 1st skill, can give her 3 boosts on her first turn. Not only that, but this skill also provides good utility in the form of 2 levels of Yin ATK and 3 levels of Accuracy for 3 turns to the party. Finally, her 3rd skill, Witch of Death, inflicts 2 levels of Yin DEF down, 2 levels of CRIT Evasion down, and 2 layers of paralysis anomalies to all enemies for 4 turns. With all of these skills, Alice supports Yin nukers very well. However, one may be wary of her 3rd skill’s duration due to its long cooldown.

Alice’s 1st spell card, Black Sign: Marisa Doll of Memories, is a rather selfish spell card, providing Alice with 2 levels of Agility for 4 turns and inflicting 3 levels of CRIT DEF down and 3 layers of paralysis anomalies for 3 turns. With boosts, this spell can provide even more intense buffs – she can get 2 additional levels of Agility and another level of both Yin and Yang DEF for 3 turns. Her 2nd spell card, Purple Sign: Patchouli Doll of Knowledge, provides more team utility by inflicting 2 levels of CRIT Evasion down to all enemies for 4 turns and giving the team 0.85 P as a post effect. This spell card also boosts her power further by self-inflicting  a layer of paralysis anomaly for 3 turns. Combined with the in-line effects of each bullet on this attack, she can inflict up to 4 levels of CRIT Evasion down to all enemies. Finally, her Last Word provides a great deal of utility. Starting with buffs, it provides the team with 2 levels of Yin DEF, Agility, and CRIT ATK for 4 turns. This attack also inflicts 2 levels of Yin DEF and Yang DEF down for 4 turns. As such, her Last Word not only can function as a great nuke, but a way to set up damage for the team thanks to her myriad of buffs and debuffs combined with her skills.

When it comes to barrier breaks, Alice is a mixed bag with a strong emphasis towards single target breaks. With a P0 Star and Moon on her two basic shots, her 1st spell card has a total of 6 Star breaks with the ability to break paralysis barriers with one boost. Thanks to this, Alice can easily inflict a full break on a target who is weak to Star on her first turn. Her 2nd spell card, on the other hand, has 3 Moon and 3 Metal breaks. While her spell 2 can break blind anomalies, she needs outside help from characters who can inflict blind in order to use this to her advantage. Finally, Alice’s Last Word is a mixed bag with a spread of Wood, Fire, Earth, Star, Metal, and Water. While the last word does have the ability to break paralysis and burn barriers, the mixed elements may make it difficult to take advantage and fully break an enemy with ease compared to a more focused elemental spread.

Ultimately, Alice has a great combo of both damage and utility. While she may be more oriented around Yin nukers, she certainly can provide the team with the ability to power through, just like how she acts as a puppet master.

As a generic slot, you cannot go wrong with power cards such as The Witch of Scarlet Dreams. However, her 1st spell card can have some variety in terms of what she can use there. She can utilize either Secret Sealing Club Girls or Occult Circle for a boost at either the Star bullets or Laser bullets. Alternatively, utilizing Yin ATK up cards like Overwhelming Firepower or Redder than Bloody helps set up Alice further. For her 2nd spell card, cards that can provide utility have a fair amount of use here. With options like Behind the Bullets: Reimu, she can inflict even more Yin DEF down on all her enemies. Alternatively, Worlds in Hand can help set up damage even further. Finally, to optimize her Last Word’s damage, you can opt to use Yin ATK filler, preferring ones with either Agility, Yang ATK, or Yin DEF.

Sporadically Margaret, as the card built for Alice, serves as her best possible slot with it providing a 50% boost to Sharp bullets and adding 40% boost to the first bullet line, which deals the most damage. Combined with the story card inflicting 1 level of CRIT DEF down to all enemies, Alice takes advantage of this card. However, some other options that Alice can utilize would be The Heat of My Fingertips as it provides a 45% Sharp boost, Some other cards like Underground Party Night (against a singular foe) and How Irrational… can prove to be alternatives that can serve their purpose well.

Alice wants her 2nd skill, Devildom Being, leveled up first as this skill provides her with 1.2 P and self buffs that provide the most benefit. Afterwards, her 1st skill, Sociere de la Foret, should be leveled to allow Alice to use 3 boosts on her first turn. This skill also provides her with more buffs due to the paralysis anomalies boosting her power. Finally, her 3rd skill, Witch of Death, should be leveled as it inflicts a handful of debuffs that will boost Alice’s damage even further as well as give her the ability to break barriers with either her 1st spell card or Last Word.

- Her ability can be conflicting in terms of it wants to do.
- Skill durations, particularly on her 3rd skill, may haunt her in multi wave stages.
- Alice’s Last Word’s wide elemental spread prevents it from doing even more ridiculous damage on any particular elemental weakness.