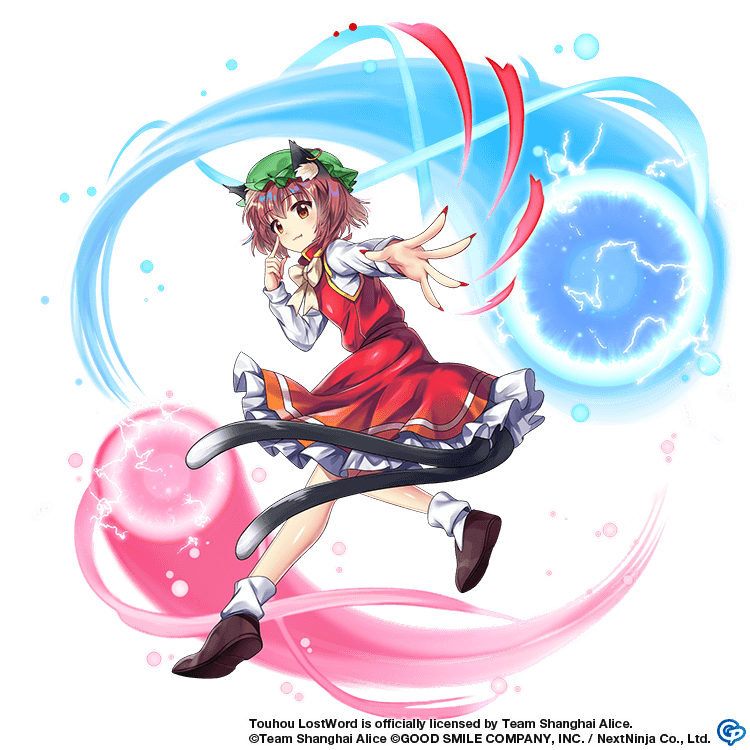 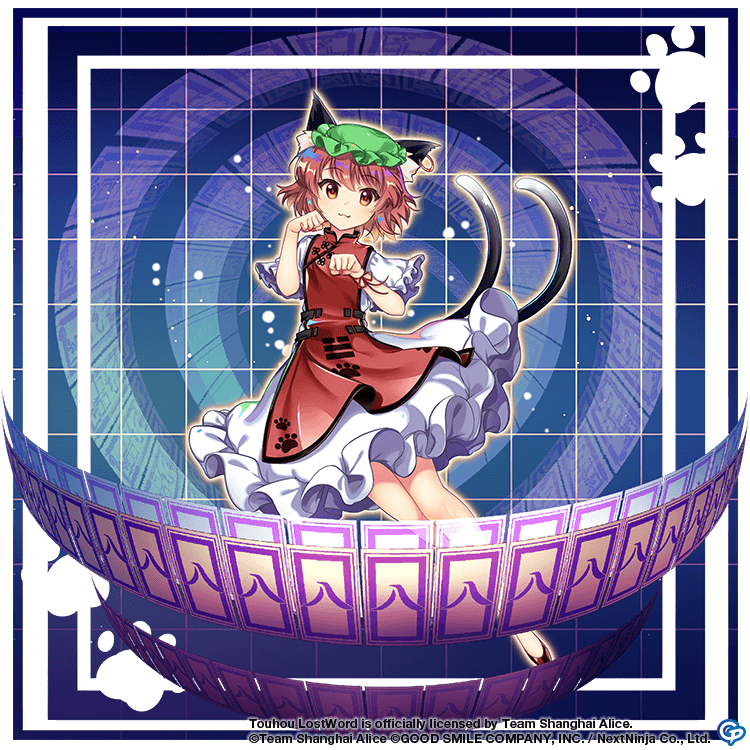 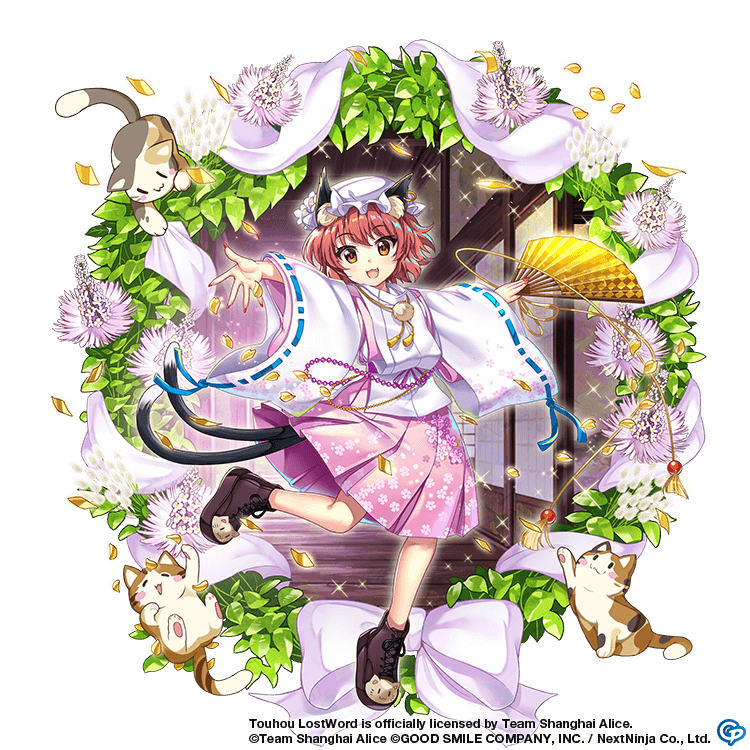 Chen's Spread Shot (a Touhou LW original). She shoots out bullets in a triangular pattern―just like cat ears. Ran told her to train to create a simple shot, so Chen worked hard to come up with this shot on her own. She really did her best.
Lucky Cat Paw

Chen's Focus Shot (a Touhou LW original). Black cats are often said to be unlucky, but they are actually considered to be omens of good fortune in some parts of the world. It is unclear what kind of luck Chen's paw might bring, but in any case, it is useful when having battles of bullets with fairies. 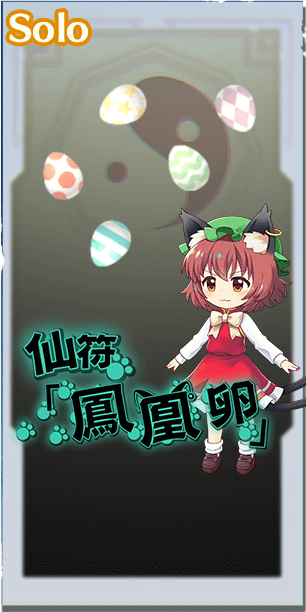 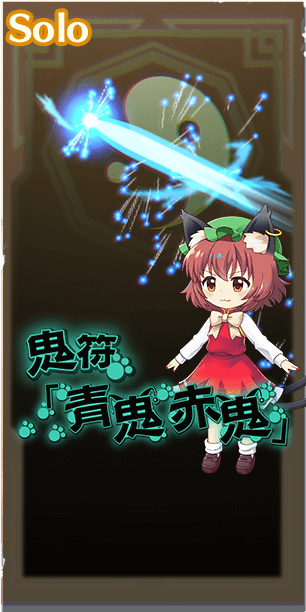 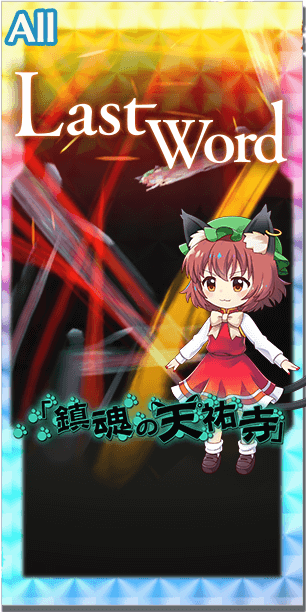 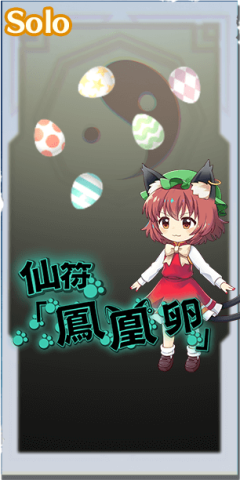 Chen's Spell Card. She throws eggs of the fenghuang―the Chinese phoenix―at her target. Fenghuang are the top of the sacred birds, so throwing their eggs is definitely not OK (if the eggs are real, that is). If you are going to try this bullet hell attack, you should be prepared for the wrath of the fenghuang.
*Pre- and Post- effects assume max level. Effects per level can be viewed here.
Pre-Attack Spell Card Effects 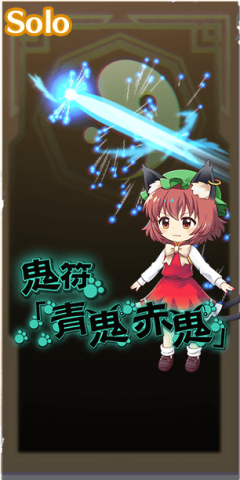 Chen's Spell Card. She borrows the power of two oni to shoot two colors of light bullets. These two oni are actually Zenki and Goki, the oni that Ran borrows power from, and Zenki and Goki are actually Yukari's shikigami... They probably see a lot of interesting things to report back to their mistress.
*Pre- and Post- effects assume max level. Effects per level can be viewed here.
Pre-Attack Spell Card Effects 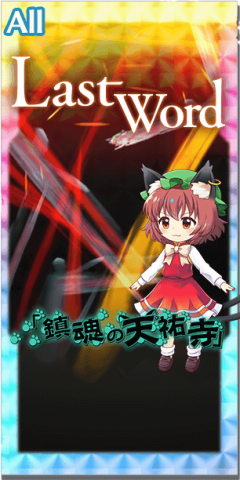 Chen's Last Word (a Touhou LW original). This is a bullet hell attack that Chen based on a famous legend surrounding a bakeneko, a type of youkai cat. In the legend, a cat licked the blood of a dying old woman and turned into a bakeneko after taking on the old woman's grudge. It took her a while because she needed Ran and Yukari to read her the story many times. Thanks to the efforts of her exhausted mistresses, Chen was finally able to attain the Last Word she so desired.
*Pre- and Post- effects assume max level. Effects per level can be viewed here.
Pre-Attack Spell Card Effects

When using Boost, own Agility 1 level UP (1 turn).

Chen was released on May 11th, 2021 as part of the starting roster.

Chen is the shikigami of Ran Yakumo, who likewise is the shikigami of Yukari Yakumo. This naturally gives her the title of “shikigami of a shikigami,” which shows when her power does not exceed the levels of her master, Ran. She never lets this stop her from protecting her master, especially when she is around to strengthen Chen, using raw speed and trickery to confuse her opponents. However, just as her appearance would give away, a cat’s common weaknesses of water and catnip will cripple Chen’s fighting capabilities immensely. Still having a lot to learn from her master, Chen is able to calculate an approximate A-Tier Friend placement.

For farming purposes, Chen already takes a note from her master’s book by having an All Last Word that aims to crush enemies with pure strength. Thanks to every bullet in her Last Word lacking an element, she will not have to worry about losing damage to any elemental resistances. Not only will her skills provide Spirit Power to add more bullets to her assault, but any increase in Agility will further strengthen her damage output. Do note, however, that a lack of accuracy (50% for each bullet) will require some Accuracy buffs to maximize her potential.

For harder fights, Chen unfortunately takes another note from her master: the absence of elemental bullets in any of her shots or spell cards. This already means that Chen will be incapable of assisting in breaking any opponents’ barriers, limiting her options. Her first card will provide her with an Agility buff that can increase her Last Word output and debuffing a target’s Evasion with her second card can be a situational support. Pointing out all of her abilities points out one major flaw, that being she can only buff herself. Perhaps it is due to her childish mentality, but the combination of zero elements for breaking and abilities that can only improve her damage means Chen has very little synergy to boost other Friends’ capabilities. In team compositions, she will only be seen as a strong All Last Word attacker who will require the support to improve her accuracy or damage.

Overall, Chen boasts high power with her Last Word, capable of boosting her Agility as much as possible to likewise boost strength. The underlying issue being that this is all she can bring to the table, as the lack of element breaks means she will have to rely on others before maximizing damage from a Full Break. Her pure focus on power still shoots her pretty high up, which should certainly make her master proud.

If you're using Chen's Spell Cards for whatever reason, they want as much Accuracy as possible, so give her your Story Card with the highest number of Levels of ACC UP on it. It's most likely you'll be using them for stat sticks however, in which case look for Story Cards with Yang ATK & Agility.

Mysterious Sword Master is far and away Chen's best option, providing her with Slash DMG UP and Accuracy UP. With that said, another card to consider would be Puppeteer and Necromancer as it provides 50% No-Element DMG UP, however this is clearly worse than using the Mysterious Sword Master card. If you got nothing else, consider giving her an ACC UP card instead.