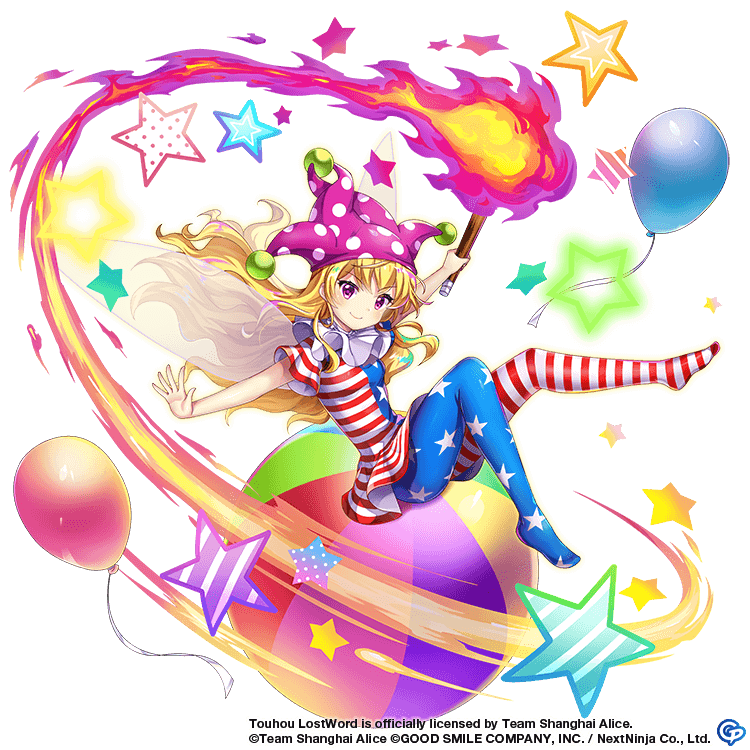 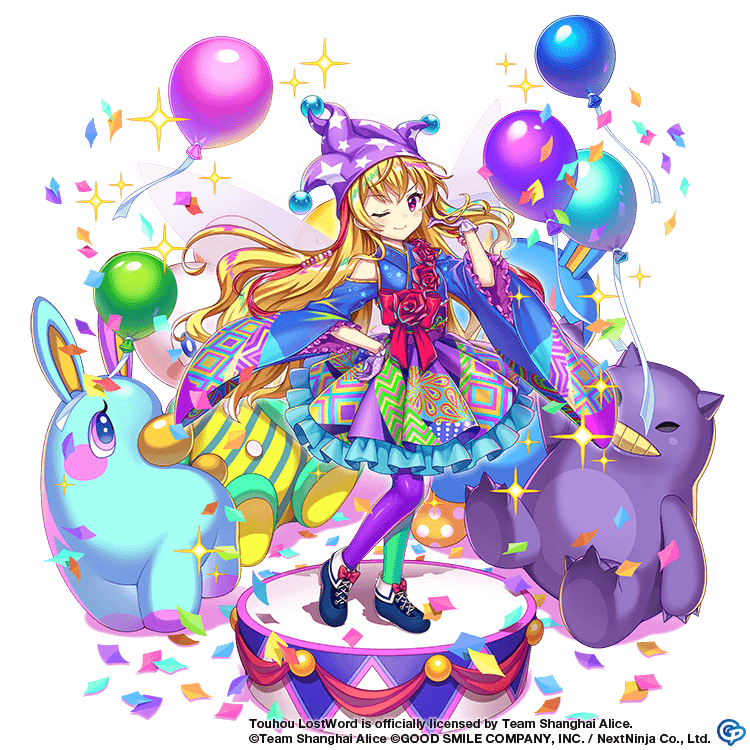 Fairy of Hell
The Goddess of Hell's Favorite

Clownpiece's Spread Shot (a Touhou LW original). This attack recreates the river that flows through Hell. The fairies of Hell live on the banks of this river and light the path with their torches for the Goddess who is their mistress... Or so it is said.
Lunatic Torch

Clownpiece's Focus Shot (a Touhou LW original). She attacks with the sparks from her torch. Apparently, the light cast from this torch can mess with people's minds. 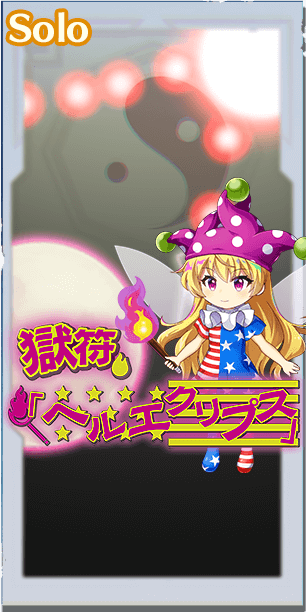 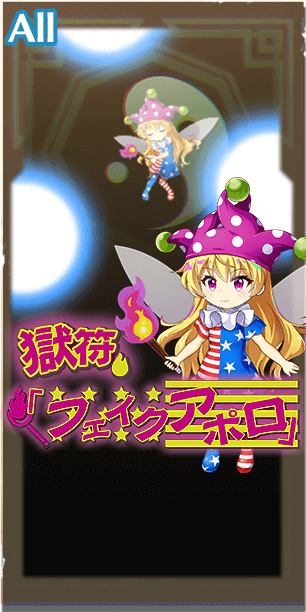 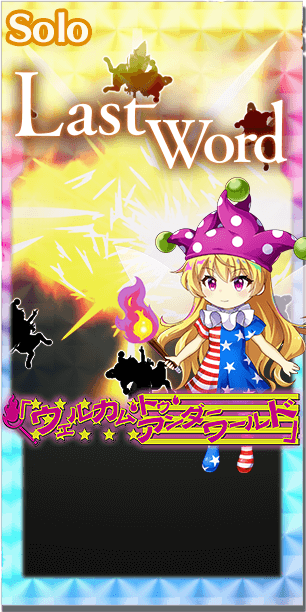 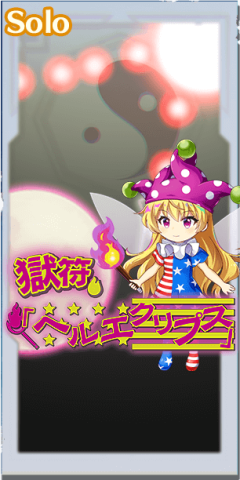 Clownpiece's Spell Card. This attack recreates the scene of a hellish solar eclipse. Most cultures throughout the world interpret solar eclipses as events of ill-omen where the sun's power wanes. This menacing and lunatic Spell Card fits Clownpiece, who was highly influential in the attack on the moon.
*Pre- and Post- effects assume max level. Effects per level can be viewed here.
Pre-Attack Spell Card Effects 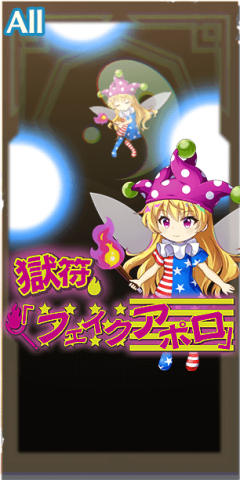 Clownpiece's Spell Card. She attacks by shooting out three bullets in the shape of moons. There are many conspiracy theories about the Apollo program's fabrication... but they have been disproven by recorded observations of the moon's surface. Despite this, there seem to be quite a few people who remain adamant in believing that the landings were a hoax. Did humanity truly go to the moon? And was the program as successful as the official records state?
*Pre- and Post- effects assume max level. Effects per level can be viewed here.
Pre-Attack Spell Card Effects

Own Yin ATK 3 level(s) UP (2 turns). [Additional effect +0 with success rate 0%.]
Post-Attack Spell Card Effects
None
Welcome to the Underworld 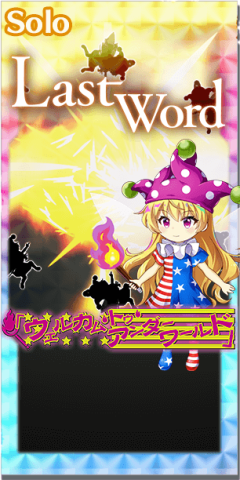 Clownpiece's Last Word (a Touhou LW original). She assaults her target in pitch-black darkness. Clownpiece's homeland is Hell―a world of darkness with only ruin and punishment... At least that is what it's thought to be like. Clownpiece's mistress, Hecatia, envisions a much more diverse Hell. It would undoubtedly have become a fun and enjoyable place for Clownpiece if Hecatia's plan came to fruition.
*Pre- and Post- effects assume max level. Effects per level can be viewed here.
Pre-Attack Spell Card Effects

Clownpiece was released on November 13th, 2021 initially as an event-exclusive Friend unlocked through The Steps to Achieve Fairyhood?!, but was added to the General Prayer Pool on March 24th, 2022.

In the harsh, unforgiving, desolate environment of Hell, fairies have a rough time of it. There’s not an abundance of life energy, life in general sucks, and there’s hardly a chance for a good prank. As such, after the events of Legacy of Lunatic Kingdom (in which the fairy was sent to the moon to disturb the lunarians), Clownpeice, the Fairy of Hell, was instructed by her boss, Hecatia Lapislazuli (herself a bigshot goddess of Hell) to stay in Gensokyo for her own benefit. Since then, she’s pranked the residents of Gensokyo, using her ability to induce madness with the fires of her torch. She’s here to prank for you as the game’s first free servant from an event, and as a B Tier Friend. Do note that Clownpiece is only available from the event The Steps To Achieve Fairyhood?!, so you will currently have to wait for a rerun to get her if you missed out.

For farming, Clownpiece simply cannot. Her accuracy is terrible, and her Last Word is backloaded. Wait until December 10th to use her for that, when auto replay enters the game (or later, if it gets delayed).

For harder content, Clownpiece specializes in taking out a single unit with a rather powerful Solo targeting Last Word, Welcome to the Underworld. There is, however, a major caveat to this - it’s extremely backloaded, and inaccurate to boot, so she will need a turn or two to get Spirit Power, as well as Accuracy support. Additionally, she brings a lot of Blind Barriers in the form of Jester of a Goddess, which makes her highly useful in setups revolving around breaking Blind Barriers (most notably with Rumia, who makes for a great partner). Finally, she has some decent break potential herself - Lunatic Torch gives her access to 1 Solo targeting Fire Break for 0 Spirit Power, which is a great deal. Additionally, Fake Apollo gives her 2 Moon and 2 Star All targeting Breaks for 3 Spirit Power, which is pretty decent. Unfortunately Hell Sign: Hell Eclipse by comparison is rather lackluster, having 2 Sun and 2 Moon Solo targeting Breaks for 3 Spirit Power, and it buffs the opponents offenses to boot - just whose side are you on, Clownpiece!?

All in all, Clownpiece is a pretty solid attacker with one job - hitting things very hard. She won’t really be able to farm anything until December 10th’s auto replay feature, but she’s a decent enough addition to any roster for harder fights.

Since Clownpiece needs 3 Spirit Power to use her Last Word at any meaningful strength, Spirit Power UP is a must - ideally, The Witch of Scarlet Dreams should be used, for the 2 Spirit Power UP it provides, to ensure she’ll be able to boost 3 times. After that, she can get Accuracy if needed, and Yin ATK UP if not. Lastly, if you can max out both, look to CRIT ATK or CRIT Accuracy for further damage boosting. Look to Yin ATK for stat sticks - you can get Yang ATK too on a card with both, but it won’t do a whole lot and high Yin ATK should be the foremost concern

Due to the lack of Accuracy on her kit combined with an inaccurate Last Word, you should favor a Story Card with a lot of Accuracy on it - a MLB Valued Tools of the Trade will provide 3 levels of Accuracy UP. Otherwise, Yin ATK UP is acceptable. In the future, there will be a very potent Light DMG UP Story Card that will give her a ton of extra damage, if you can provide her with Accuracy in some other way.

Depths of Lunacy is Clownpiece’s major priority, as it directly affects her damage output. After that, or if you’d prefer extra Break ability, Jester of a Goddess is useful if you have any unit who can break Blind Barriers. Finally, Nymph-Craft is virtually useless and can be saved for when she gets a Fantasy Rebirth (or you have nobody else to train).