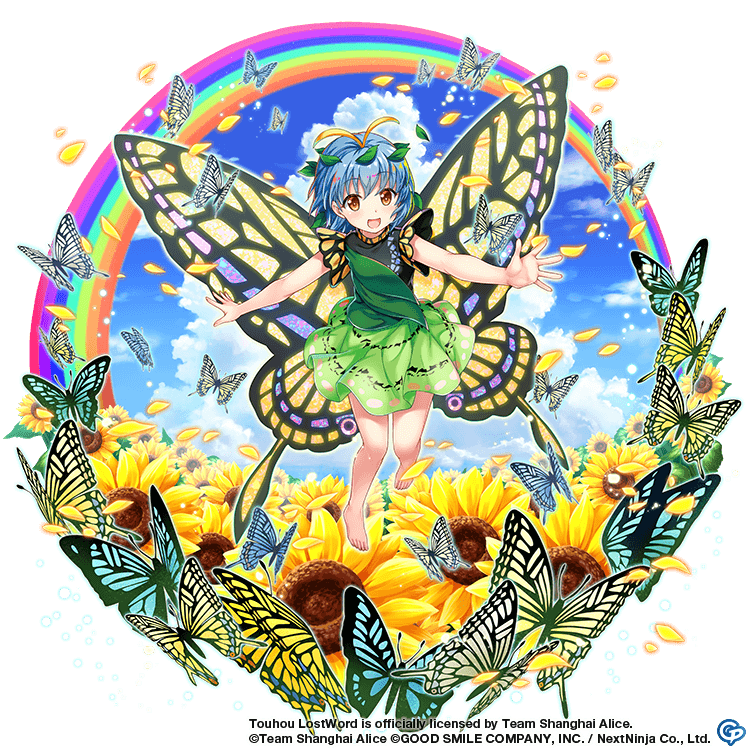 The Butterfly Fairy who Approaches God

Eternity Larva's Spread Shot (a Touhou LW original). She attacks by releasing a foul-smelling odor from the horn-like appendage on her head. It in fact isn't a horn, but an organ that secretes unpleasant odors. This organ possessed by swallowtail butterfly larvae makes them unique among butterflies. It is thought that the larvae use it to intimidate and distract predators, and that the secretion contains a mixture of over fifty chemicals.
Eyespots

Eternity Larva's Focus Shot (a Touhou LW original). She attacks by intimidating her foe with the eye-like patterns on her wings. The exact pattern varies, but the red marks on a swallowtail butterfly's wings are an example of eyespots. Their larvae are also unique in that they develop this pattern once they reach five years old. The eyespots effectively intimidate predators (especially birds) and serve as a decoy for their heads. 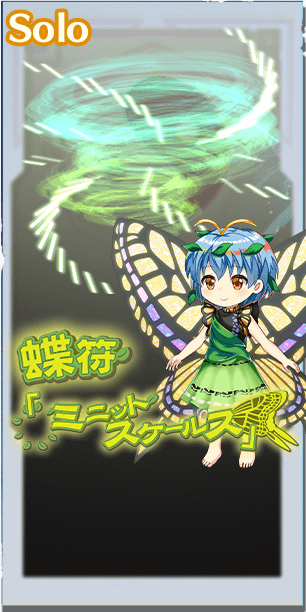 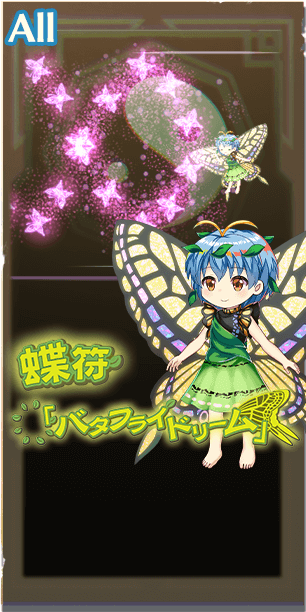 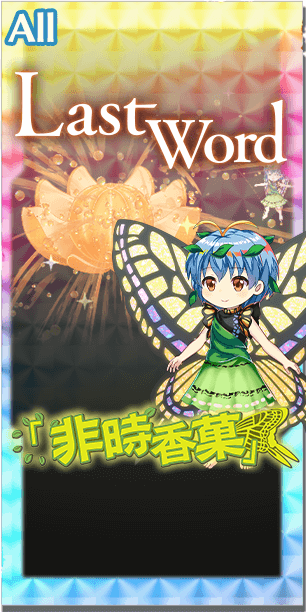 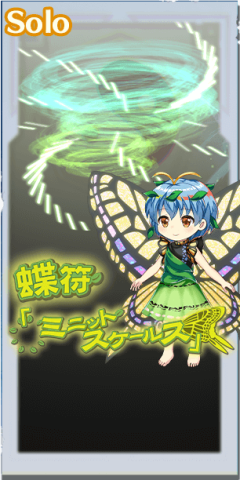 Eternity Larva's Spell Card. She attacks by attaching fine scales to her foe. Butterfly wings are covered in these tiny scales, which are what form their unique patterns. As well as their ability to distract and intimidate predators, the scales are thought to have a number of different functions, such as regulating body temperature by absorbing or releasing heat. They're mainly made of cuticle, which can also be found in animal and human hair.
*Pre- and Post- effects assume max level. Effects per level can be viewed here.
Pre-Attack Spell Card Effects 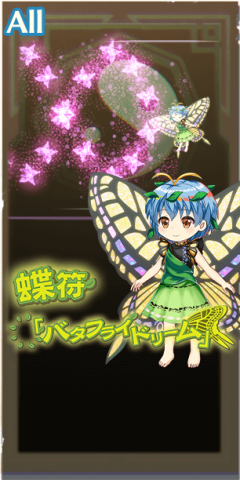 Eternity Larva's Spell Card. This mesmerizing attack renders her foes unable to distinguish between dreams and reality. Butterflies have long been thought to possess mystical qualities, with Zhuang Zhou's ''Dreams of Being a Butterfly'' being a famous tale based on that subject. Butterflies are spiritual creatures, a symbol of rebirth, and the subject of many songs and stories. Humans have admired the butterfly's beauty throughout history and they're said to be the most collected insect.
*Pre- and Post- effects assume max level. Effects per level can be viewed here.
Pre-Attack Spell Card Effects 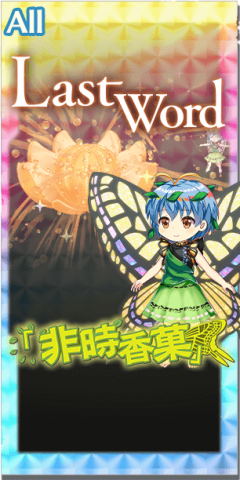 Eternity Larva's Last Word. Strong-smelling citrus juice bursts forth in this attack. Citrus trees like the mandarin tree are evergreen, making them symbols of eternal youth and longevity. As a result, the fruit they bear is said to be a spiritual elixir that extends the lives of those who consume it, and is referred to as the ''fruit of ever-fragrant trees.'' According to the ancient chronicles of Japanese mythology, the ever-fragrant trees are found beyond the sea in the promised land of Tokoyo no Kuni. Since Tokoyo no Kuni is known as the land of the dead, the fruit of ever-fragrant trees may have some connection to the Yomotsuhegui, the food of the dead.
*Pre- and Post- effects assume max level. Effects per level can be viewed here.
Pre-Attack Spell Card Effects

Eternity Larva was released on December 9, 2022 in Prayer “Butterfly of Blue Skies”.

Mere Butterfly or something much greater? With her gentle facade, Eternity Larva seems like nothing more than a simple Butterfly Fairy; the first to be defeated during the Four Seasons incident. Behind the guise of a fairy however, lies something much older, that not even Okina has quite been able to understand. The presence of an ancient god who presides over an everlasting world.

Whatever her true nature, Eternity takes on the role of a Support-class Friend here in Touhou Lost Word, helping Yin-focused teams excel with various buffs to power their attacks.

You won’t be using Eternity for very much outside of Fire and Sun breaks. With that in mind, The Witch of Scarlet Dreams will keep her Spirit P levels healthy so you can keep firing on full cylinders. If you’re looking to deal damage with her for any reason, Mysterious Sword Master boosts her first Spell Card by 50%, while Stand-In Shrine Maiden boosts her second Spell Card by 50% and increases her Crit ACC, while serving as a Yin ATK stick.

With her Last Word consisting solely of Liquid, players can go with either Resort Stars or Frozen-Over Gensokyo to boost her output. For the well equipped, Beach Sanshoku Geidontei also has the additional benefit of reducing enemy Yang DEF, should you happen to have any Yang attackers handy.

Players will want to go with Eternity’s bread and butter Skill 3, Life Regeneration to get everyone’s Accuracy up to suitable levels while throwing in some Barrier support. Skill 2, Rapid Growth can come next to help her hit 2 Spirit P immediately to lay down Sun and Fire breaks. Skill 1, True Metamorphosis completes the defensive array with Yin and Yang DEF buffs that also enable Heavy hitters.

Eternity keeps her team running via buffs to ACC and Yin ATK. She also buffs Agility as well as Yin and Yang DEF to help with Slicing and Heavy bullets.

Eternity can recover both Barriers and HP for her teammates, keeping them going through long firefights.

Where most modern characters can manipulate Anomalies in some way through buffs or breaks, Eternity stands out like a sore thumb with no interactions with Anomalies whatsoever. Her simple nature means you’ll be sticking to your bread and butter when it comes to her.

Element breaks aside, Eternity doesn't contribute very much in the way of damage, due to her lack of notable Killers and Crit enhancements.