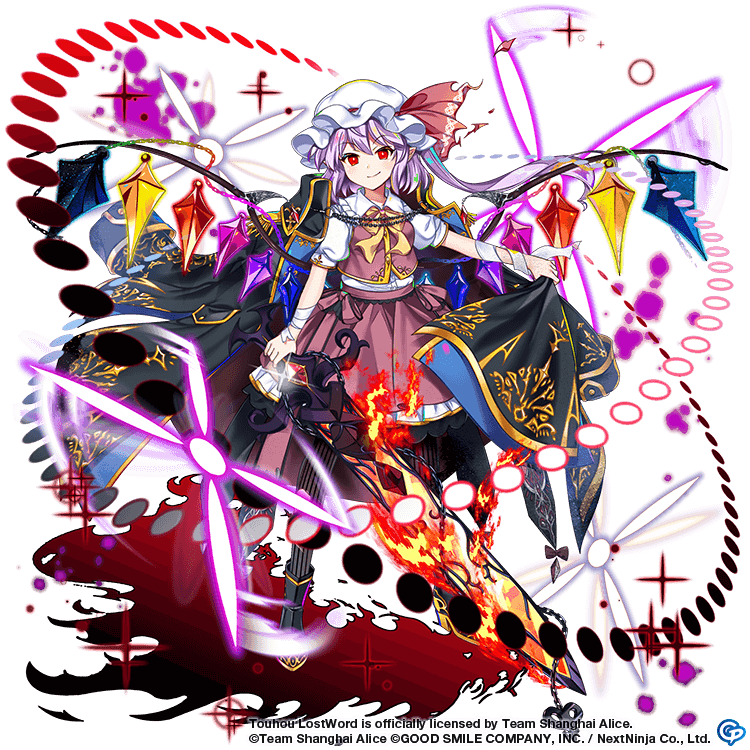 The Spread Shot of Flandre Scarlet with the twisted fate (a Touhou LW original). She shoots out bullets in a spiral to catch mice. This is one of the traps that Flandre designed to try and combat the Hunter. You can see the effort she put in to make it effective while retaining the mechanism of a mousetrap.
Neck Hunt Clock

The Focus Shot of Flandre Scarlet with the twisted fate (a Touhou LW original). She shoots decapitating bullets that spin like clocks. This is one of the traps that Flandre designed to try and combat the Hunter. You can clearly see her simple plan to corner the Clockwork Hunter. 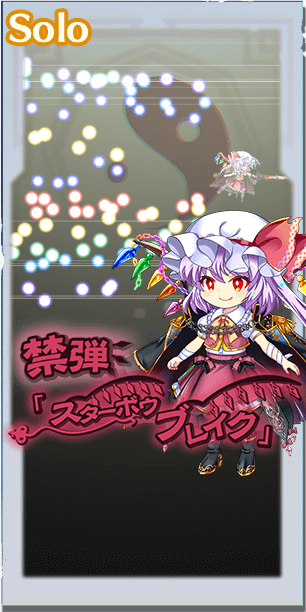 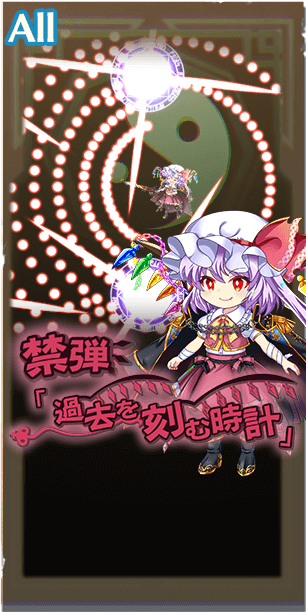 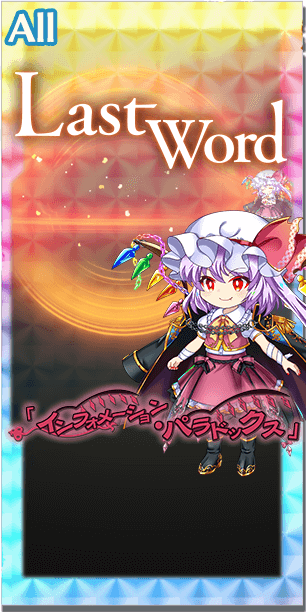 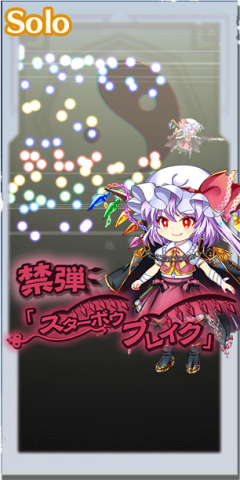 A Spell Card of Flandre Scarlet with the twisted fate. This attack shows a vision of the world at sublight speed. It is unknown whether Flandre repeatedly accelerates to sublight speed and then decelerates or whether this is merely an illusion created by her bullets. However, the bullets she shoots are real, and the rainbow-tinted light of the stars falls alarmingly fast. The past that should be impossible to regain is sealed beyond the starbow.
*Pre- and Post- effects assume max level. Effects per level can be viewed here.
Pre-Attack Spell Card Effects

Inflicts 2 layer(s) of Barrier Status: Poison to self (3 turns). [Additional effect +0 with success rate 0%.]
Post-Attack Spell Card Effects
None
Forbidden Barrage: Clock that Ticks Away the Past 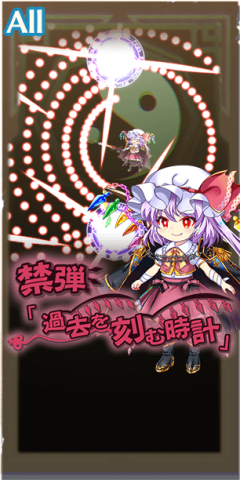 A Spell Card of Flandre Scarlet with the twisted fate. She attacks with clocks that spin clockwise and anti-clockwise. There have been countless thought experiments about turning back time since antiquity, but the general consensus is that doing so is all but impossible. According to Chaos Theory, and since Laplace's Demon can't exist, countless futures can be derived from a single past. And multiple different pasts could have resulted in the present. To determine the correct past, you need to gather the correct information, but this is an uphill battle as the information could be lost to the overwhelming tide of entropy. Reality dictates that Flandre's strength alone is not sufficient to escape her twisted fate.
*Pre- and Post- effects assume max level. Effects per level can be viewed here.
Pre-Attack Spell Card Effects 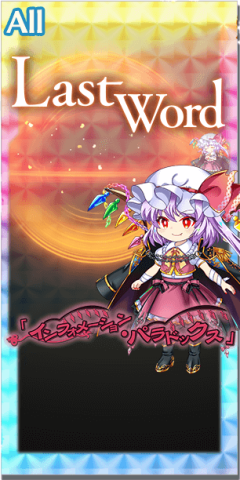 The Last Word of Flandre Scarlet with the twisted fate (a Touhou LW original). Flandre traps all information inside herself in this attack. This is one of the answers she arrived at when looking for a way to forcefully locate a trace of her sister, who had been lost forever. She feared information loss so much that she decided to collect every scrap of information and let nothing go. Even though she radiates heat, she makes sure to never let any information escape her. This point of madness deviates from the norm and cannot be understood... it is a singularity.
*Pre- and Post- effects assume max level. Effects per level can be viewed here.
Pre-Attack Spell Card Effects

For every layer of Barrier Status: Freeze or Poison, Yang ATK, Yin ATK, CRIT ATK, and CRIT Accuracy 1 level UP.
DMG to effective elements 30% UP.

E1 Flandre Scarlet was released on May 11th, 2022 in Ultra Festival: Vampire Pursuing the Hunter.

Universe E1 Flandre Scarlet, The Vampire Pursuing the Hunter: A stalwart defender of her mysteriously older-yet-smaller sister Remilia, and the one who gets things done around the Scarlet Devil Mansion. She works tirelessly with the Mage, Patchouli, the Butler, Koakuma, and the Gatekeeper, Meiling, to restore her sister to her former glory while also evading the unseen hunter who stalks them all. Flandre's ability, to destroy anything, makes her the strongest in the mansion. With the cool, collected maturity of her E1 self rather than her L1 form's normally whimsical, carefree self, she takes charge with natural ease and serves as second in command to Remilia. E1 Flandre is an EX-Tier Friend.

For farming, Flandre is arguably the current best character in the game. Her Last Word, Information Paradox, has insane turn 1 damage, and her damage potential grows from there with Agility support. Flandre’s 1st Spell Card, Forbidden Barrage: Starbow Break, also hits extremely hard against lone enemies to the point where even at no limit breaks and awakens, it can still kill enemies that are vulnerable to her wide array of killers. For story card farming, Flandre can farm 2-7-1 at 12 SP with Global’s currently available story cards, 3-3-3 at 8 SP, 3-11-1 at 8 SP, Hifuu E9 at 12 SP, and two future story card farms.

As for difficult content, Flandre can be described as one of the biggest nukes in the game. Even so, the utility she provides the team is still valuable and can be used multiple times in challenging content, even if the duration of her effects are short. Her 3rd Skill, Heat Death, makes up for its short duration by having a 4 turn cooldown. Thus, it can be used multiple times during challenging fights. Her 1st skill, Soul Drain, assists the team by giving 0.4P to the party. However, this skill serves more to augment her power with self inflicting Poison and to potentially break Freeze anomalies on the enemy. Finally, her 2nd skill, Ghost Ignition, gives Flandre Accuracy and 1.25 P. Her self-inflicted anomalies, while sounding like a downside at first, are a benefit due to her ability, Capable of destroying absolutely everything (Distorted), which converts these anomalies into buffs like Yin ATK and CRIT ATK.

Flandre has 3 notable ways to nuke: Her focus shot, her 1st Spell Card, and her Last Word. Her focus shot, Neck Hunt Clock, has amazing peak damage with setup - providing enough raw power to defeat enemies that typically require a Last Word to overcome. Her 1st Spell Card, as stated earlier, has a wide array of killers that can easily overcome any singular foe that comes across its wrath so long as they do not resist Star or avoid her killers. Her 1st Spell Card also has some potential to help further her damage potential with 2 layers of self inflicted Poison anomalies and a 1.0 P battery to herself. Finally, her Last Word overwhelms with power, having one of the highest damage in the game. It’s even able to wipe tower floors and Lunatic 2-7-1, overcoming the enemies’ high defensive buffs, by herself. This insane damage can grow further with Agility support due to her slicing scaling. Her Spread shot, Human Mouse Trap, has the ability to heal Flandre up if need be while also outputting great damage, albeit not as hard as her focus shot. Flandre’s 2nd spell card, Forbidden Barrage: Clock that Ticks Away the Past, restores one barrier for herself with a 50% chance to restore 2. While the damage on this spell card isn’t really phenomenal compared to her other attacks, this spell card can give her Yin ATK with the 2nd bullet line and inflict multiple freeze anomalies on the enemy to set up Freeze breaks.

Flandre’s barrier breaks are good but not outstanding. While she does boast a good spread of both Water and Star breaks on her 1st Spell Card and Last Word, her 1st Spell Card requires 3 boosts to get the 3 Water breaks. This spell card can also be used to break both Freeze and Poison anomalies but is a bit clunky to utilize due to the barrier break happening late in the attack.

Overall, Flandre takes a seat as one of the supreme nukers in the game. While she may not boast exceptional utility or barrier breaks, the amount of damage that she can produce more than makes up for it. Befitting the sister of the Mistress, this vampire exudes power that allows her to pursue the hunter.

The Slice scaling and secondary effects of Flandre's attacks are as follows:

For her 1st Spell Card, there are a handful of options that Flandre may opt for. To be exact, Puppeteer and Necromancer, Anniversary at the SDM, and Touhou Lostword all stand out. Puppeteer and Necromancer alongside Anniversary at the SDM can make Flandre’s 1st Spell Card output insane amounts of damage with minimal setup. On the other hand, Touhou Lostword, while it may not dish out as much damage, allows her to set up Agility as well as utilize the spell as a nuke. For her 2nd Spell Card, she may prefer to run a CRIT ATK extender like Miracle Mallet or Bloody Order, or a Spirit Power up card like The Witch of Scarlet Dreams. If you want to maximize the 1st turn damage that Flandre can dish out, opt for story card filler that contain Yin ATK, preferring ones with Agility.

Due to her fully Yin and Energy Bullet Last Word, Unknown Barrier Team is her best option that beats all the other Spell Cards for both setup and turn 1 damage. It also is farmable in the Story Stage 3-18-3 so it is easily available.

Flandre wants her 2nd skill leveled up first as it gives her accuracy as well as gets her to P2 instantly. Afterwards, leveling up her 3rd skill is preferred as it gives her CRIT buffs as well as Freeze anomalies to help augment her nuking capability. Finally, her 1st skill should be leveled to help further boost her damage as well as get more power for boosts.

+ One of the best T1 damage caps. Setup still manages to improve her peak damage.
+ Good CRIT support with some power support to the party.
+ Decent access to both Star and Water elements.