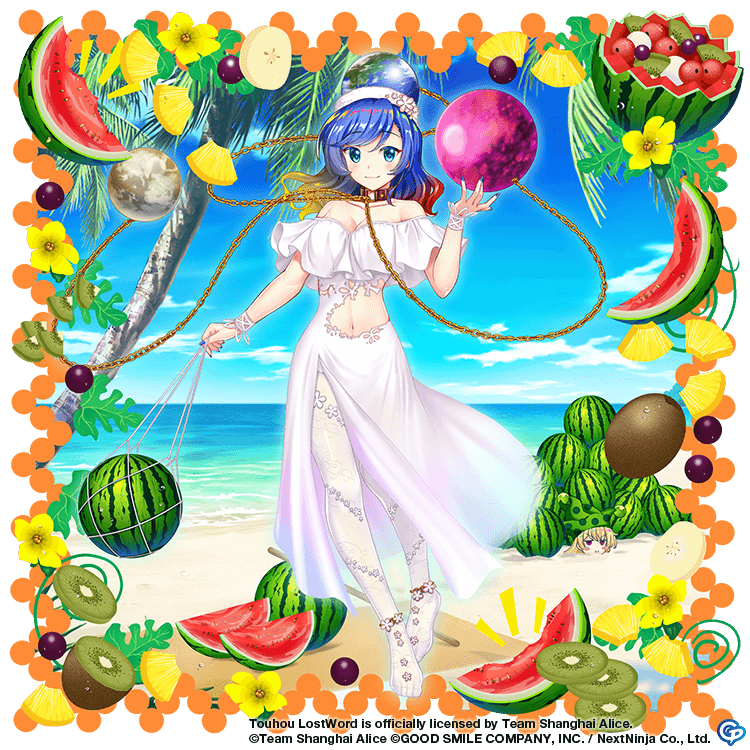 The Spread Shot of Hecatia Lapislazuli from the world delirious with eternal summer (a Touhou LW original). She eats some watermelon and spits out the seeds as bullets. The goddess smugly explains that it takes a fair amount of training to shoot the seeds properly. Apparently, this goddess squealed with glee when she realized you could shoot seeds while eating these giant fruits. This is just what Hecatia was looking for―edible entertainment. And as a bonus, the seeds also act as bullets.

In the outside world, there are apparently seedless watermelons, but this goddess will never accept something so illogical. However, the beach could turn into a watermelon patch if she doesn't clean up the seeds once she's done.
Fruit Splitter

The Focus Shot of Hecatia Lapislazuli from the world delirious with eternal summer (a Touhou LW original). She attacks by splitting a watermelon. What face do you think Hecatia made when she found out about watermelon splitting? She was so overwhelmed by the game's entertainment power that she remained expressionless. She uttered not a word... Until, after a delay, her face lit up like a child's―full of hope and jubilation. She is certain that if she manages to bring watermelon splitting back home to Hell, she won't need any other attractions. 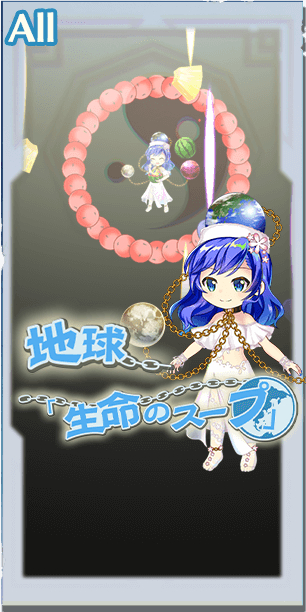 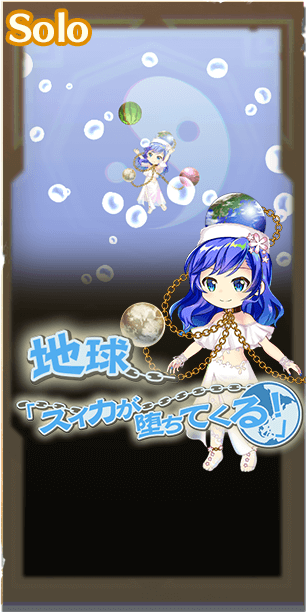 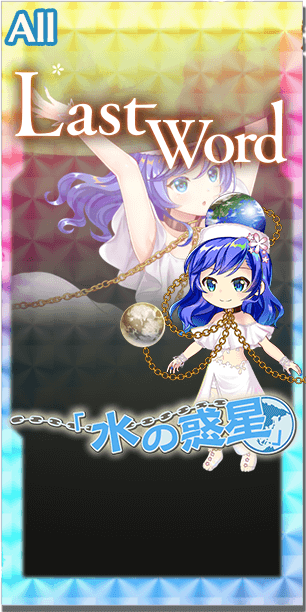 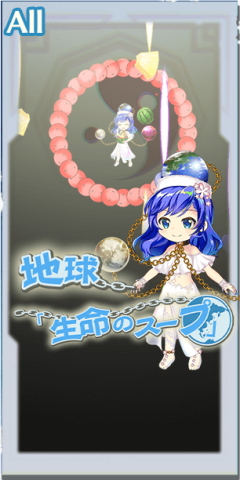 A Spell Card of Hecatia Lapislazuli from the world delirious with eternal summer (a Touhou LW original). She rains down a soup that could be called the origin of all life. Did you know that the first lifeform was born from the nutrient-rich sea foam near the coast?! That means the primordial sea was fruit punch... Or maybe not.

''Punch'' means five, and this fruit punch is made with five types of fruit: watermelon, pineapple, kiwifruit, banana, and grapes. However, none of these fruits really evoke images of tropical islands anymore since delicious fruits are now cultivated all over the world.
*Pre- and Post- effects assume max level. Effects per level can be viewed here.
Pre-Attack Spell Card Effects 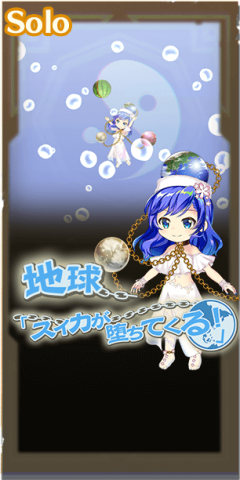 A Spell Card of Hecatia Lapislazuli from the world delirious with eternal summer (a Touhou LW original). Giant watermelons fall down from the sky. What would happen if the moon in the sky fell down to Earth? Everyone has probably imagined that happening at least once. Apparently, there is even a disaster movie about it.

Of course, this goddess has also thought about what might happen when the moon falls. But then she went above and beyond... What would happen if giant watermelons fell instead?! Her divine smile clearly shows that she is absolutely certain everyone would love it.
*Pre- and Post- effects assume max level. Effects per level can be viewed here.
Pre-Attack Spell Card Effects 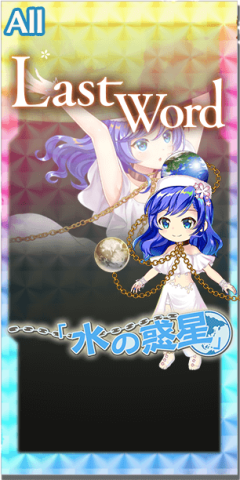 The Last Word of Hecatia Lapislazuli from the world delirious with eternal summer (a Touhou LW original). She recreates the Earth's Hell in this attack. The goddess Hecatia had a realization. The Hecatia of this world remembered that during the Age of the Gods, countless celestial objects fell down to Earth, resulting in the creation of a bountiful ocean. She vaguely remembered that this was because some of those celestial objects were icy comets and asteroids. She then glanced down at the delicious fruit in her hands that was apparently called a watermelon...

The goddess had an epiphany! She made it so countless watermelon asteroids would rain down from space! Thanks to that, the sea is now bright red, just like in Hell... which is what she wanted.
*Pre- and Post- effects assume max level. Effects per level can be viewed here.
Pre-Attack Spell Card Effects

FOREWARNING: C3 Hecatia is a Friend who has only dropped on Touhou LostWord JP only a few days prior, making collecting information for her slightly more complicated than other Friends. While there may be some uncertainty to how her entire kit works, the conclusions here have been studied to be relevant to the current game’s meta.

Hecatia Lapislazuli is mostly known for her Otherworldly Form, or the form in which she has red eyes and hair, along with a red planet atop her head while the Earth and Moon by her hands. All three of these plants (with the red one representing the “Otherworld”) represent the Hells that Hecatia has control over. Her forms also act as bodies which allow Hecatia to coexist within their separate hells. Red is for the Otherworld, and is the form that Hecatia appears as the most often. However, her blue form is the one that reflects Earth’s own Hell. Combine the power Hecatia already has with elements of the Earth and top it off with the C3 Universe’s beachy flair, and Hecatia becomes even stronger, landing herself as an SS-Tier Friend.

Dealing quick damage is pretty simple for Hecatia, as she currently boasts the highest Yang ATK stat in the game, at 1930. This pairs well with her Yang-only Last Word, Water Planet, which provides 3 breaks in Water and Earth while also debuffing all foes’ defensive stats (Yin DEF and Yang DEF by 2 levels and CRIT DEF and CRIT Evasion by 3 levels, all for 4T). She also lets out some small buffs to slightly boost her own damage, the most important one being 1 level of Accuracy UP after her second bullet line. While Gensokyo Killer, a very flexible Killer Bullet for dealing critical damage, is only on her fifth bullet line, Hecatia does hold some high Hard scaling so that her Last Word still hits very hard. Her second skill, Gengobe Pickles, even provides 2.00 Spirit Power immediately and Self-Quick to allow Hecatia to immediately shred through enemies…or at least give them a big bath.

Hecatia is unique in being the first Epic Friend (as well as any type of Friend above Festival Type) that focuses heavily on debuffing. Her second spell, Earth: Watermelons Are Falling! is all about debuffing the foes’ Yin and Yang stats by 3 levels (3T), with her third skill, Madder Ball Rugby, being similar to her Last Word in decreasing all opponents’ Yin DEF by 2 levels (5T) as well as Yang DEF and CRIT DEF by 3 levels (5T). She can apply even more Yang DEF DOWN with her first spell, Earth: Life Soup, which not only decreases all targets’ Yang DEF by 2 levels (4T) but is supportive by healing the party by 40% of her own HP and restoring 1 Barrier level. Outside of a generous All-target 3 levels of Evasion DOWN (3T) from Gengobe Pickles, 3 additional levels of CRIT Evasion DOWN (4T) from her first skill, Chilly Thunderbolt,  and the rest of her debuffing, Hecatia does not provide any team support, having no buffs given from Boost or Graze. Hecatia is purely a debuff Friend, meant to get in first to cripple foes so the team can easily finish them off.

One other factor that is impressive about Hecatia is her breaking potential. She is all about Water and Earth breaks, which is immediately clear when looking at her spells that have similar spreads of 3 Water and 3 Earth. She also comes with a 0P Water break on her Focus Shot, Fruit Splitter, whenever the need to spam breaks comes up. On top of that, Hecatia is all about applying Freeze anomalies, such as the 3 layers from Chilly Thunderbolt, and following them up with anomaly breaks, with Freeze breaks found on Fruit Splitter and Earth: Life Soup while 3P of Water Planet can break both Freeze and Paralyze. Hecatia herself benefits from being applied by Freeze and Paralyze thanks to her Capability of having three bodies (Beach), obtaining offensive stats from the former and defensive stats from the latter. However, Hecatia really only applies the latter on herself via skills and Water Planet. Hecatia is also immune to Burn to give her a good matchup against most anomalies. On the topic of minor details, Hecatia can use her passives Body Cooling Effect and Beach Goddess to both apply a Freeze anomaly and lower Yang DEF by 1 level to a single target at the start of each wave.

Just as expected from an Epic Friend, Hecatia truly holds a great amount of power and utility, but many factors contribute to making her fall just short of true dominance. For one, the 5T and even 4T endurance of some debuffs do not matter most of the time, since debuffs are removed upon completing a wave and even when breaking a HP gauge. This is truly harmful when it comes to Madder Ball Rugby, as if you end the wave or HP Gauge shortly after applying the 5T debuffs and the battle isn’t over yet, you now have to wait 7T before applying the debuffs again. On top of that, the heavy amount of Yang DEF debuffs can just be negated whenever Hecatia or an ally Full Breaks a foe, as Full Breaking removes defensive debuffs in favor of having a pure defense debuff on the foe. While this is true for any Debuff Friend that breaks a foe, it really cripples Hecatia’s ability to be relevant when compared to Friends that can both debuff and deal heavy damage without purely relying on the former. As an additional minor note, while Hecatia can be crazy and set up 10 levels of Yang DEF DOWN on a single foe, past 5 levels DOWN the debuff does not really add as much as compared to raising Yang ATK, to which Hecatia sadly cannot do by herself.

Don’t let the previous paragraph make you think Hecatia is worthless, as she still boasts that heavy power that any good Epic Friend has. Although it can be excessive at times, her debuff accessibility is still incredibly good, and her barrier breaking potential from the Water and Earth elements to the Freeze anomaly is just as impressive. She has small ways to support her team and stay in the battle beyond enemy debuffing, giving her good synergy for plenty of teams, especially Yang-based ones that can abuse her Yang DEF debuffs. Overall, this blue-flavored Goddess will certainly be a good Friend to serve a cool victory.

Hecatia, like any other Friend, appreciates Spirit Power restoration of any kind, making The Witch of Scarlet Dreams a definite good choice for her. The other main stat that Hecatia would like to have due to not having her own buffs is Yang ATK, with How Irrational… being an easy choice due to its 3 levels of Yang ATK UP along with a Yang ATK stat stick. When you’re good on these, you can try focusing the third slot on unique utility, such as Worlds in Hand, which is a partywide CRIT ATK buff to boost Hecatia’s own team support.

Being entirely made of Heavy Bullets and cursed with a duo-element format, the best card for Hecatia’s Last Word is easily The Secret God in the Sky, providing a 50% boost to the whole attack and even some CRIT ATK UP for the chance she hits her killers. There aren’t so many incredible Heavy Bullet Power UP cards to mix and match, so just stick to this easy farming option or perhaps another Yang ATK UP card.

Immediately go for leveling up Gengobe Pickles, as the ability for Hecatia to reach 3P at the start of a battle will make her perform so much better compared to having to wait. Next up can be Chilly Thunderbolt, both for an increased amount of Freeze anomalies, and therefore more anomaly breaks, on all foes as well as a low cooldown that allows for the anomalies and CRIT Evasion debuff to be practically applied forever. Madder Ball Rugby, Hecatia’s third skill, is definitely worth leveling up too due to its higher defensive debuff levels, but the previous two skills give Hecatia better potential compared to going straight for this one.