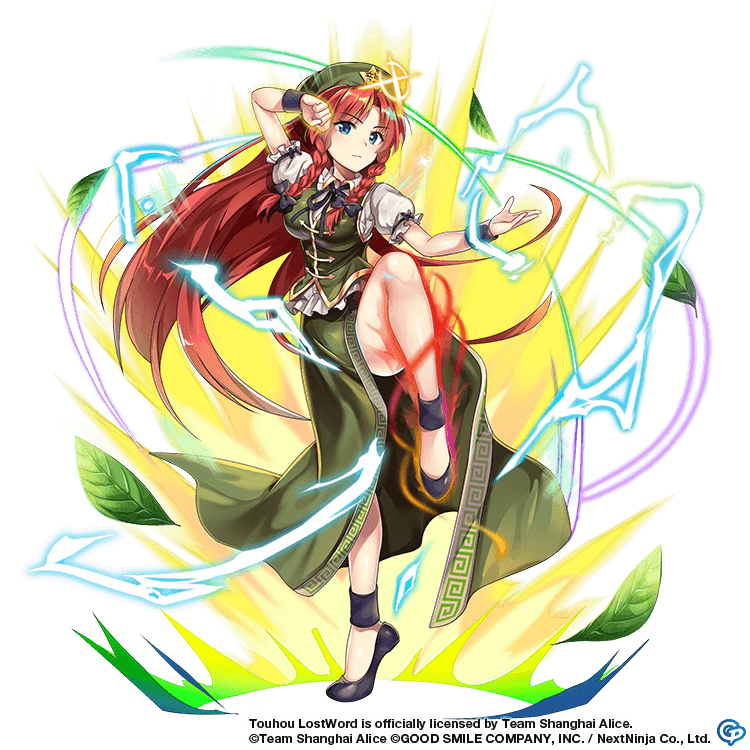 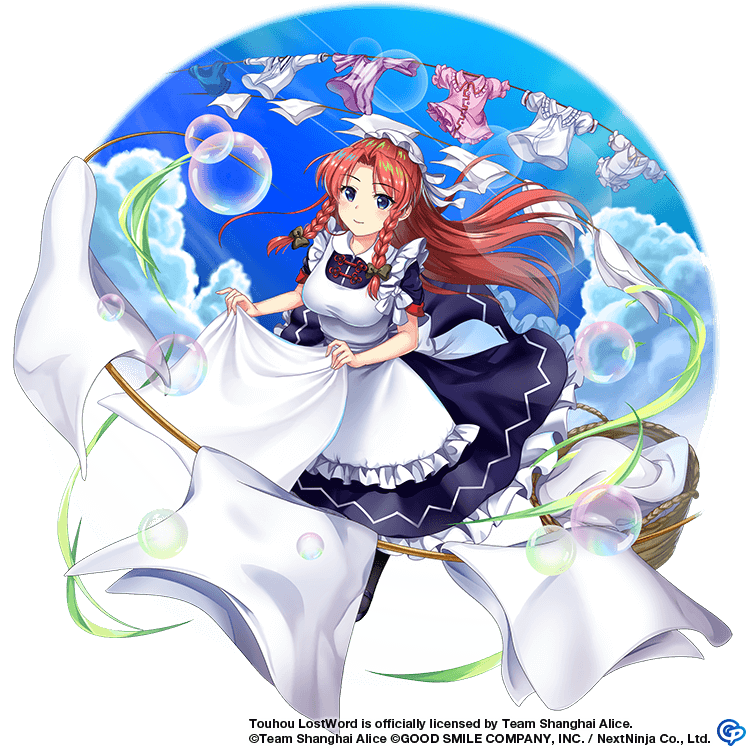 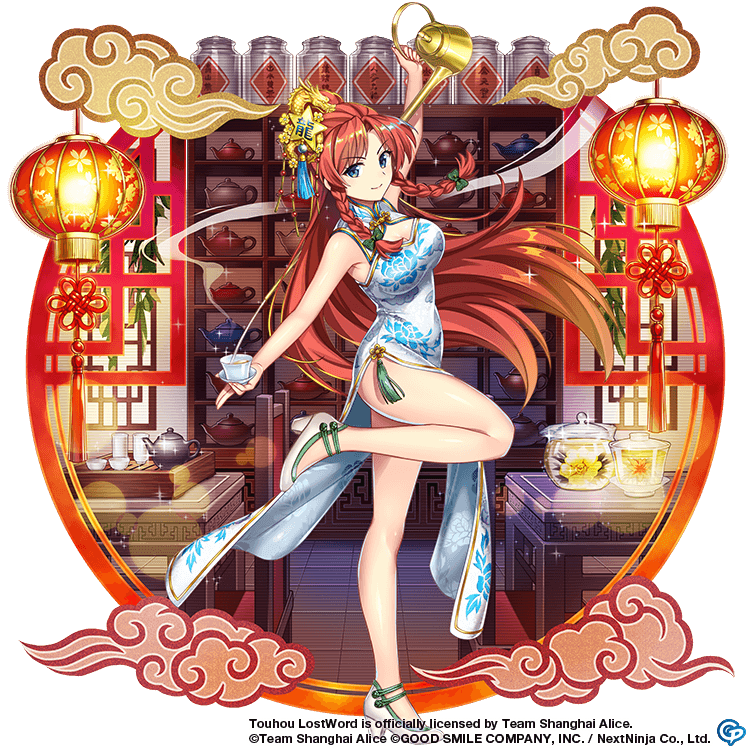 Hong Meiling's Spread Shot. She gathers the qi circulating around her and disperses it with great force. However, it is not as powerful as it could be, because Meiling is easily distracted.
Fragrant Wave

Hong Meiling's Focus Shot. She draws an arc with her arms and makes the qi around her concentrate in her hands before unleashing it in a powerful wave. Meiling says her shot is instantaneous, but others say differently. 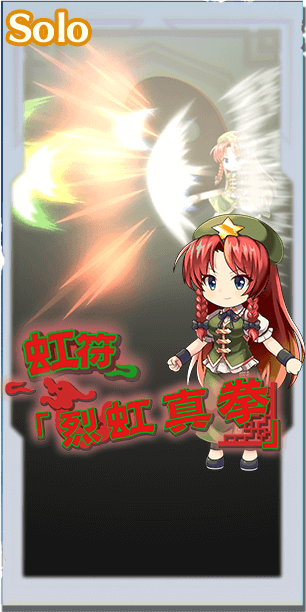 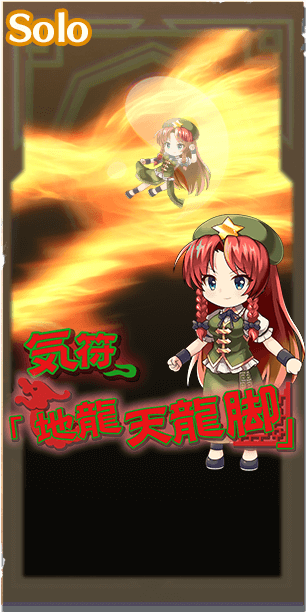 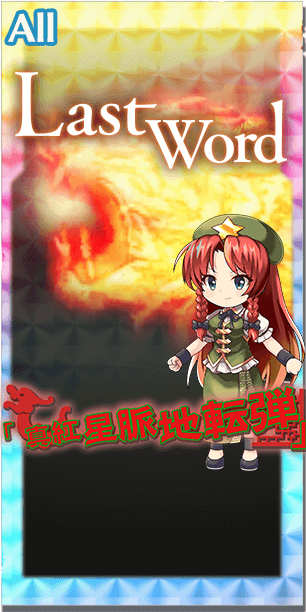 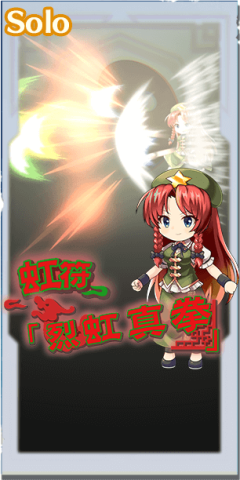 Hong Meiling's Spell Card. She strikes forward with qi in this physical attack, but her movements are so swift that she seems to transcend her physical body. It just looks like she's firing off a series of qi bullets!
*Pre- and Post- effects assume max level. Effects per level can be viewed here.
Pre-Attack Spell Card Effects 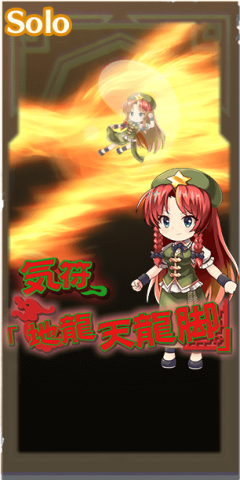 Hong Meiling's Spell Card. She focuses qi into her flying kick and then lets bullets fly in all directions. Her regular Earth Dragon Wave does not hit enemies in the air, so she added the Sky Dragon Kick to improve it.
*Pre- and Post- effects assume max level. Effects per level can be viewed here.
Pre-Attack Spell Card Effects 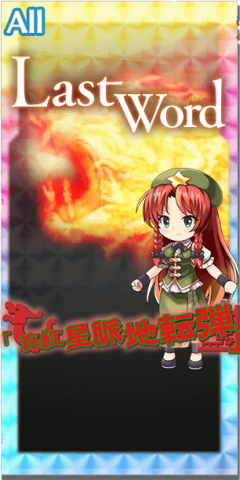 Hong Meiling's Last Word (a Touhou LW original). It is based on Star Sign: Earth-Shaking Star Pulse and is full of Meiling's identity as the guard of the Scarlet Devil Mansion. She manipulates her own qi to create a crimson aura, making her look more like a vampire's retainer than a Tai Chi Chuan practitioner. You might think that this would make her better at her job as a guard... but you would be wrong.
*Pre- and Post- effects assume max level. Effects per level can be viewed here.
Pre-Attack Spell Card Effects

Hong Meiling was released on May 11th, 2021 as part of the starting roster.

A Chinese Girl who’s proud of her heritage, Hong Meiling (her given/first name is Meiling, her name is simply in chinese order) serves as the unshakable guard of the Scarlet Devil Mansion. Unusually for Gensokyo’s inhabitants, she’s actually not the best at bullets - instead, she favors martial arts, most notably her mastery of T'ai chi ch'üan. Extremely well rounded, she’ll happily duel anyone who asks, and does her best to keep intruders out. Sure, sometimes she naps on the job, but don’t underestimate her devastating kicks or punches that leave her as a S-Tier Friend.

For farming purposes, Meiling’s All targeting Last Word, Crimson Earth-Shaking Star Pulse, is on the same level as powerful farmers like Yuyuko or Ran, with a nice perk over the others: the large majority of her damage on her Last Word on turn 1 is typeless, and the elemental parts are divided amongst two types. As a result, only a minority of her damage at best will be resisted at any given time, making her an extremely reliable event farmer. Additionally she can farm Chapter 3 Act 1 with the right partner.
Solo Stage Farms: 2-7-1 (slow and expensive), Future Story Card Stage

For harder fights, Meiling’s got it much better than most other attackers. For starters, whilst both of her Spell Cards are unfortunately only solo targeting, they’ll pack a massive punch due to the ATK UP on both. Do note however that the ATK UP buffs are only one turn in length - she will want to use her skills Martial Arts and Will of the Gatekeeper in order to preserve those buffs, due to how buffs work in LostWord - all buff levels are added together, and only the longest duration is counted for the entire stack. Between both of these, she can let loose a devastatingly powerful All targeting Last Word at 10 levels of Yin & Yang ATK UP and 6 levels of Yang DEF UP - Crimson Earth-Shaking Star Pulse may only be a 3-1-1 Spell Card on the surface, but between 10 Levels of ATK UP and the 120% Hard on bullets 1, 4, and 6, alongside being all Energy and thus scaling extremely well with Energy DMG UP, it will deal a devastatingly powerful blow to any foe.

She’s got more than just damage too. Her team support is fairly potent - providing her entire team with 3 levels of Yin ATK UP for 3 turns from Will of the Gatekeeper alongside 1 Level of Yang DEF UP for 1 turn to the whole team every time she Boosts thanks to her character ability. Additionally, her elements are fairly potent - her focus shot, Fragrant Wave, has 1 Solo targeting Earth Break at 0 power, which is always fantastic. Rainbow Sign: True Intense Rainbow Fist gets a slightly above average 0/2/2/3 Solo targeting Star Breaks for 0/1/2/3 Power, and Qi Sign: Earth Sky Dragon Kick gets the same but for Earth. It's also not recommended it be used for this purpose, due to how much damage it does, but if you're desperate for additional breaks then Crimson Earth-Shaking Star Pulse deals a rather solid 2 All targeting Earth and Star Breaks for 3 Power.

Overall, Meiling is an extremely strong Friend, be it for farming, or for harder fights. She’ll guard you with her life, just so long as you let her get her naps in.

The chances for her secondary effects, alongside her Hard scalings, are as follows:

Since Meiling already has an abundance of ATK and DEF UP in her kit, she can primarily focus on supporting the team with Elemental Breaks. Spirit Power UP cards like The Witch of Scarlet Dreams is a staple for allowing you to access majority of her bullets. If you’re looking to squeeze out even more damage, look for Accuracy UP cards such as Valued Tools of the Trade & Yang DEF UP cards, as she already maximizes her ATK UP from Rainbow Sign: True Intense Rainbow Fist and Qi Sign: Earth Sky Dragon Kick.For stat sticks, whilst Meiling makes use of Yin ATK, Yang ATK, and Yang DEF, she makes the most use out of Yang DEF and Yang ATK, which Dancer in the Puddle fulfills.

If for some reason, Meiling is in a fight that will last more than three total turns, make sure to use ATK UP Story Cards in order to refresh the duration of her buffs if she’s going to be using all four Spell Cards.

As Meiling already gives herself an abundance of ATK UP and DEF UP as well as some Accuracy UP, alongside having a mixed Last Word, and every Bullet on her Last Word is tagged with Energy, anything that gives Energy DMG UP is her best bet, with Unknown Barrier Team as the current best option. For farming purposes, if she can already comfortably wipe out the enemy stage without a damage buff, look for Accuracy UP cards like Poltergeist SIsters' Concert instead, to make her perfectly consistent.