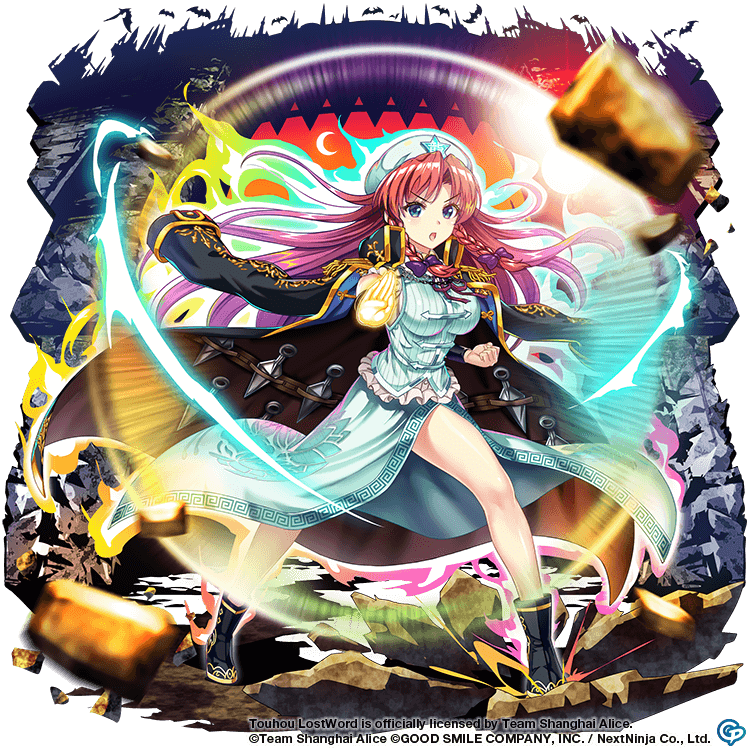 The Spread Shot of Hong Meiling with the twisted fate. She attacks by stamping focused temperament into the ground. This attack is not usually suited to aerial battles, but it seems this Meiling can use it even while in the air. The world of qi is very complex.
Sky Dragon Kick

The Focus Shot of Hong Meiling with the twisted fate. She uses the recoil of stamping qi into the ground to launch a flying kick high up into the air. This attack is complementary to the Earth Dragon Wave, so she should also only be able to use it close to the ground. But this Meiling somehow makes it work anyway. What's going on with this qi...?

Incidentally, this attack seems to be one of Meling's favorites, irrespective of the world she comes from. 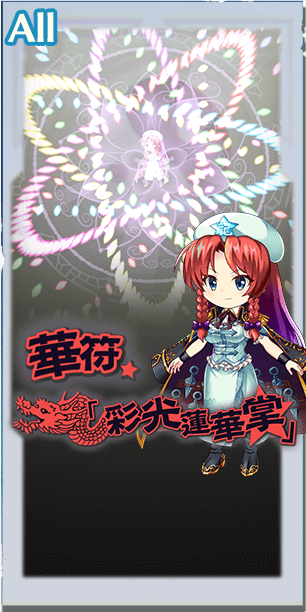 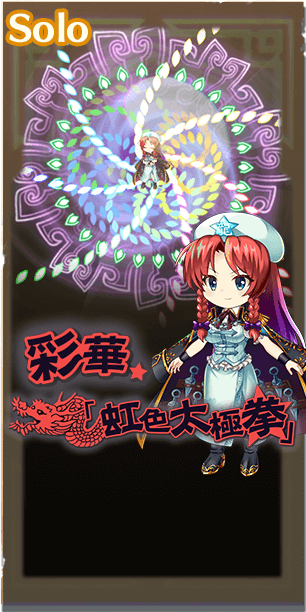 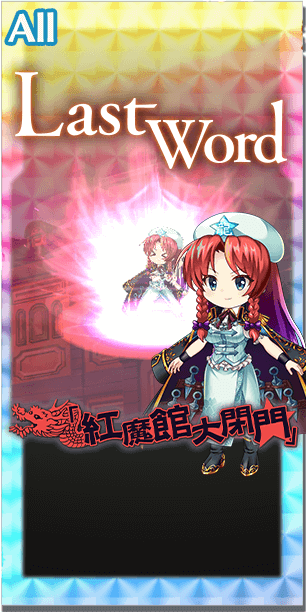 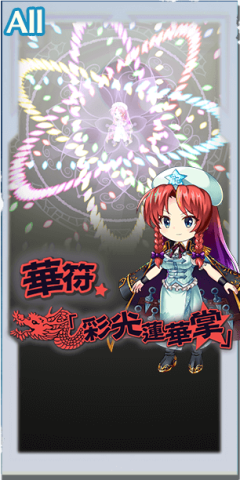 A Spell Card of Hong Meiling with the twisted fate. She shoots out lots of qi in a pattern that looks like a rainbow lotus flower. A certain tengu once stated that this looks like it would bring good fortune. Apparently, there is an incredibly violent variant of this attack where Meiling transfers a large amount of qi directly into her opponent's body and then ignites it...

There were rumors about this attack being super effective against devils and undead, but those were nothing more than rumors. There is no way that they could be true because her mistress is an undead devil.
*Pre- and Post- effects assume max level. Effects per level can be viewed here.
Pre-Attack Spell Card Effects 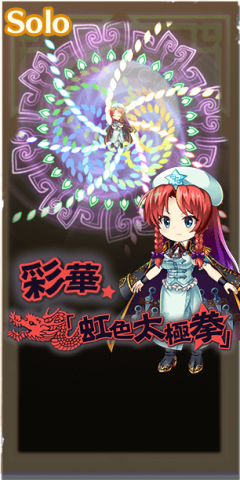 A Spell Card of Hong Meiling with the twisted fate. She performs physical exercise that is good for the body and mind. While it is an exercise, she still releases qi in the form of bullets... A certain tengu questioned whether this exercise is really good for you or not, but it probably is since a person's flow of qi is directly linked to their health.

There is a variant of this attack where Meiling unleashes waves of qi that ripple out over the ground. That variant seems to match the tai chi philosophy behind this exercise.
*Pre- and Post- effects assume max level. Effects per level can be viewed here.
Pre-Attack Spell Card Effects 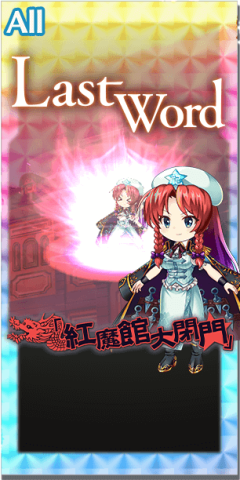 The Last Word of Hong Meiling with the twisted fate (a Touhou LW original). She shows how much pride she takes in being the one who stands before the gate of this world's Scarlet Devil Mansion. When a gate is closed, it is a wall. But when it is opened, it becomes a path. A gate is a boundary that separates the grounds of a property from the outside. No one can meet the mistress without meeting Meiling first. She is also the sole resident of the Scarlet Devil Mansion who stands on the boundary and constantly watches the inside and outside simultaneously. She, of course, does not sleep on the job.
*Pre- and Post- effects assume max level. Effects per level can be viewed here.
Pre-Attack Spell Card Effects

Hong Meiling is the youkai gatekeeper of the Scarlet Devil Mansion, whose only job is to…guard the gate. She is only really seen around or within the Scarlet Devil Mansion, either doing (or sleeping on…) her job or gardening around the mansion. While it is unclear what type of youkai she is, she is a proud master of Chinese martial arts and can manipulate qi to get an advantage while physically fighting. In the past, she has failed in her duties by either being defeated on the job or just being too laid-back and careless. Nevertheless, this E1 Meiling, one who appears to be from a very distinct universe, takes her job much more seriously and scores as an SS-Tier Friend.

For pure offense to ward off unwelcome guests, Meiling can easily clear them out. She comes with built-in Accuracy support thanks to her first spell, Flower Sign: Colorful Light Lotus Flower Palm, which raises her Accuracy by 3 levels (3T). Afterwards, she can go even further beyond with her first skill, Security Guard, which raises her and the team’s Yin ATK by 3 levels (3T), something that activating her Star-studded Last Word, Closing the Scarlet Devil Mansion Gate, does as well, with 4 levels of Yin ATK UP (2T) for herself. She also raises her CRIT ATK by 3 levels (2T), something that will come in handy toward Gensokyo intruders due to her Gensokyo-Killer bullets. As a beefy wall, all of the defensive buffs she builds up over battle will come into play for offense due to her Hard scaling, giving Meiling excellent setup damage.

People say that defense is the best offense, and Meiling would likely agree with them. As a Defense-Class Friend, she currently holds the highest Yang DEF and 2nd highest Yin DEF stats, giving her great defensive value as well as allowing her to buff her defenses even higher. A majority of her kit is defensive-based, as seen by her second spell, Colorful Chinese Flower: Rainbow Tai Chi Chuan, raising the party’s Yin DEF by 3 levels (3T). Her second skill, Blue Dragon, joins in as well by restoring 75% of her HP as well as buffing the team’s Yang DEF and Yin DEF by 3 levels (3T). Not only does she keep her guard up, but she assists in helping other Friends defend themselves, which can easily make threats less menacing. She can even use her third skill, Mysterious Qigong, to restore 2 layers of the party’s Barriers with only a 6-turn cooldown! Colorful Chinese Flower: Rainbow Tai Chi Chuan can’t stop being helpful as well, both healing Meiling by 40% of her HP and giving the party 1 extra Barrier layer.

While she has already fortified the rest of her allies, Meiling still uses a lot of Focus UP to prioritize damage onto her and keep the team safe. Security Guard raises her Focus by 4 levels (4T), making it very hard for foes to deal damage to other members of the team, even if using All-target attacks. Closing the Scarlet Devil Mansion Gate joins in the fun, both raising Meiling’s Yin DEF and Focus by 3 more levels (4T). In case you weren’t doing the math, Meiling can easily reach 9 levels of Yin DEF UP all by herself, making the Hard scaling on Closing the Scarlet Devil Mansion Gate ridiculously high.

With Meiling doing such an incredible job on guard duty, it’s almost impossible to find a true flaw with her. Unfortunately, there is a minor issue with her elemental breaking. She does not lack any elements, as instead every single bullet line, including basic shots, has an element! This gives her 2 different 0P elemental breaks in Earth and Metal. While this sounds great, this means that all of her spells are very varied in her elemental coverage, only having a small bias toward Star, as 2/6 of the lines are Star on her spells and 4/6 are Star on her Last Word. This makes it somewhat difficult to be focused on elemental breaks with her. Keeping her guard up, Meiling still has another trick up her sleeve: Flower Sign: Colorful Light Lotus Flower Palm’s 2 layers of Burn anomaly inflicted upon activation. While already a great way to debuff Yin stats further, the spell can break these anomalies at 1P, giving Meiling a very easy way to immediately break barriers. Combine this with Friends that apply Burn as well, and it’s almost like Meiling didn’t need elements in the first place.

Meiling gives practically everything that is needed with a Friend. Aggressive offense, stalwart defense, supportive utility, and even some anomaly breaks on the side. She might not be the most apparent in offensive buffs, but with her plentiful defensive support skills and Security Guard’s partywide Yin ATK buff, she really doesn’t need it to be good. Security Guard even gives herself 1.25 Spirit Power in case she needs the boost at the start of a battle. Not that she will need to worry about staying in the battle, as she will be a force to be reckoned with, determined to prove herself as Immovable Meiling.

There is no need to focus on buffing Meiling’s defenses (especially Yin DEF) in story card effects due to her own buffing potential, although stat sticks are always helpful. For effects, instead turn to the always-good Spirit Power restoration from cards such as The Witch of Scarlet Dreams. If you want Meiling to pack an even greater punch, go for Yin ATK UP effects from cards like Boo!. Finally, if you are combating a Gensokyo resident or Youkai foe, CRIT buffs are a great way to optimize damage, making Miracle Mallet a great choice.

Having an Energy Bullet-only Last Word as well as being Yin-only gives Meiling a healthy amount of options for this story card slot. Primarily, Unknown Barrier Team is the most obvious option, being both a flat 50% buff to every Energy Bullet as well as giving Meiling even more Yin ATK UP from stat sticks and effects. However, don’t count Underworld Party Night out, as while it is a smaller Energy Bullet buff of 20%, it also debuffs the target’s Yin DEF and CRIT DEF to optimize Meiling and her team’s damage output. While she doesn’t need the Accuracy support herself, Secret Sealing Club Girls is also a good option due to its 50% buff to Star-element bullets, which makes up most of the spell, as well as the Evasion debuff to all foes to ensure that everything hits.

Meiling’s first skill, Security Guard, is an easy first pick for the first skill to prioritize, mainly to allow Meiling to get to 2P on turn 1 with a 1.25 Spirit Power boost. It also gives her partywide Yin ATK boost an extra level (3 instead of 2) as well as increases her Focus UP to 4 levels. Up next is her second skill, Blue Dragon, thanks to its incredible teamwide defensive support, boosting the buffs from 2 levels to 3 levels, while also giving Meiling an incredible 75% self-heal to patch herself up immediately. By no means should her third skill, Mysterious Qigong, be slept on with its 2 partywide Barrier restoration, but the other bullet-specific resistances makes this skill more niche and situational than the previous two.

+ 0P Earth and Metal on basic shots
+ Last Word packs a punch with Gensokyo-Killer and Hard scaling
+ Insane defensive utility for self and allies
+ Burn anomaly breaks at 1P of first spell, which also inflicts them