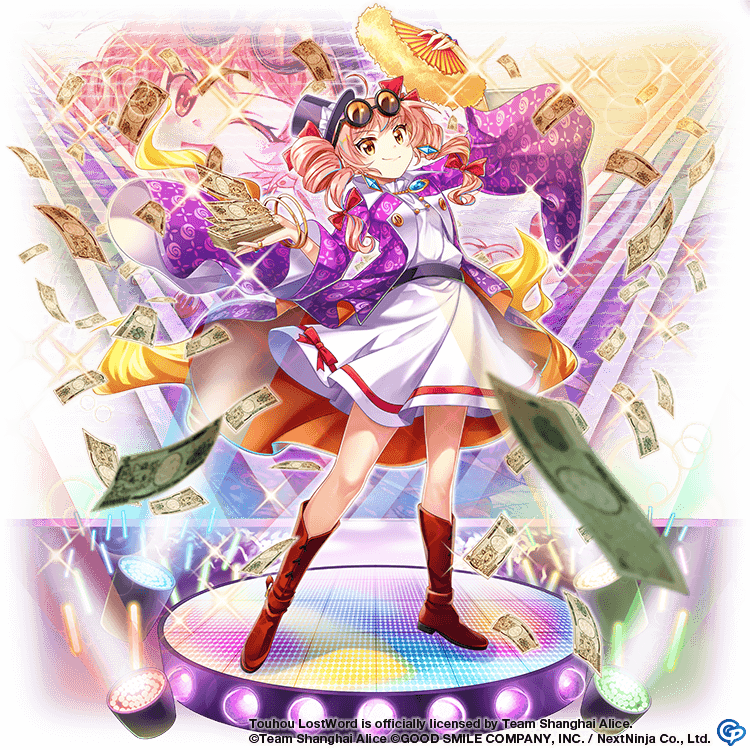 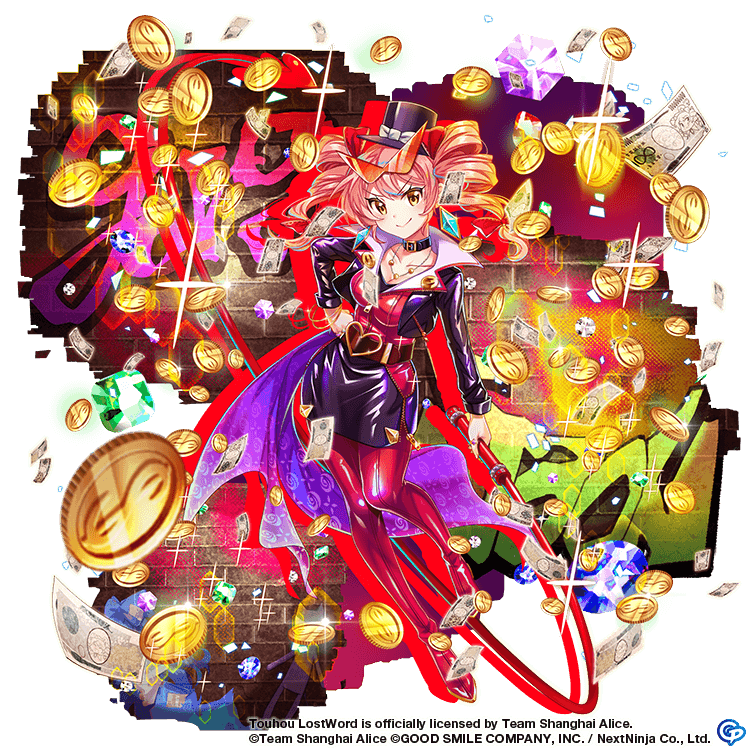 Joon Yorigami's Spread Shot. This attack involves throwing a feathered fan like a boomerang. It is a mystery as to what this fan looks like when folded up. Also, normal boomerangs don't actually return when they hit their target.
Spendthrift Uppercut

Joon Yorigami's Focus Shot. This attack is designed to check whether or not the opponent has any loose change in their pockets. Usually, one would just ask the target to jump or turn their pockets inside out, but Joon doesn't do anything by half measures. 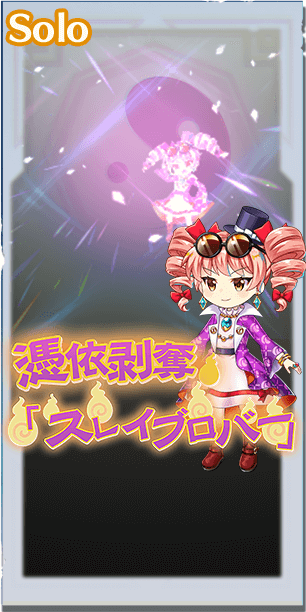 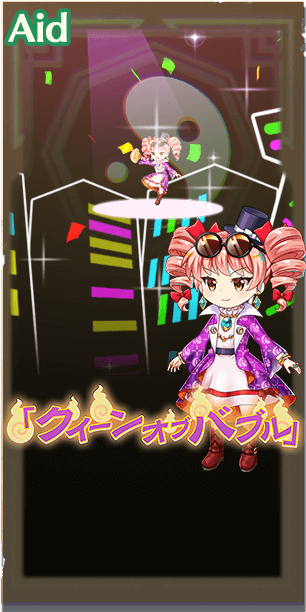 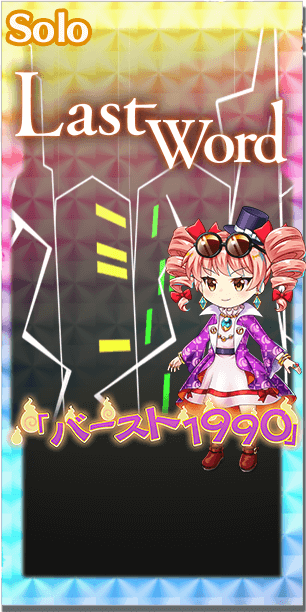 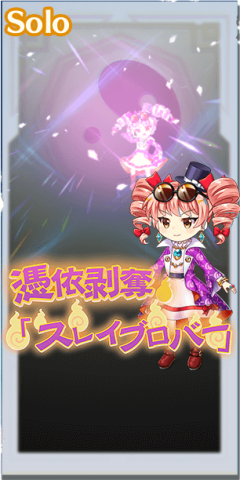 Joon Yorigami's Spell Card. This attack was originally used to steal an opponent's Slave (the support role of a duo using a mysterious phenomenon known as Perfect Possession) in a past incident. Now Joon uses this attack to steal some sort of spirit from her opponent, which she then crushes in her fist. It looks rather painful.
*Pre- and Post- effects assume max level. Effects per level can be viewed here.
Pre-Attack Spell Card Effects 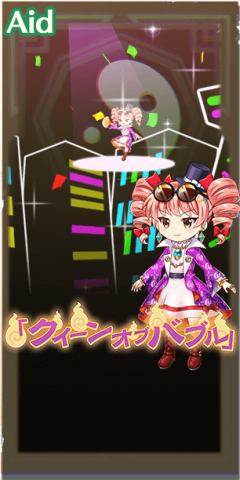 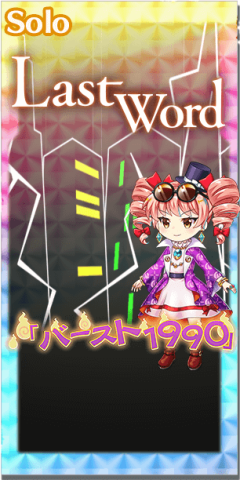 Joon Yorigami's Last Word (a Touhou LW original). It goes without saying, but this is an attack replicating the burst of the economic bubble. The financial success was nothing but a dream. Perhaps these sisters came to Gensokyo because this crisis that once completely changed Japan is now just a memory from the distant past.
*Pre- and Post- effects assume max level. Effects per level can be viewed here.
Pre-Attack Spell Card Effects

Joon Yorigami was released on October 12th, 2021 in Festival: Gods of Poverty & Pestilence.

Joon Yorigami is one of the main antagonists in Antinomy of Common Flowers and a pestilence god. Joon is exceedingly rich and has the unique ability to target someone’s financial status and take from them, plummeting them into the lower class. Along with her older sister, Shion, Joon robs innocent residents of Gensokyo all while making poor, hasty, and impulsive financial decisions herself.  Despite being sisters and working together, Joon doesn’t actually get along with Shion very well. She is often seen bullying and belittling her sister, who takes the form of someone that has been put in an inescapable state of poverty and misfortune. During her first appearance in the main series, Joon takes advantage of the Perfect Possession ability and uses it along with Shion. Due to Shion’s ability to bring misfortune to others the two of them were thought to be unstoppable. However, they were eventually stopped by Reimu Hakurei and Yukari Yakumo, who then took the pestilence god to Myouren Temple and had her train there as punishment for her actions. Her personality is what you’d expect from her story; she is arrogant and egotistical, spitting those below her and stepping on them. Though we do get a rare chance to see Joon in a more down-to-earth state when she was punished by Yukari and Hakurei after being defeated. In Touhou Lost Word, Joon Yorigami has many different jobs, providing some support to her team while also being a selfish attacker, landing herself in B Tier.

For farming purposes, Jo'on can do a solid job between her backloaded nature and Possession Stripping: Slave Robber providing her with Yang ATK UP, but she will need a extra turn or two to get the job done.

For more challenging levels where you have more time to ramp up your units, Joon does a little better. She’s a bit of a mixed bag and is a little awkward to use most of the time. This is because she is one of the few characters with a supportive Spell Card that boosts accuracy while also having rather selfish skills (albeit ironically fitting for her character). If you’re able to get some Spirit Power on her, Joon can be a potent Metal Breaker, having a whopping 7 Metal Breaks in total across her first Spell Card and Last Word. She also has the added utility of the Quick and Charge that her first and second skills provide her.

Overall Joon is a standard mid-tier character and is average in almost every aspect. Though this isn’t the end for the greedy pestilence god, as she could very well be placed higher with the addition of a certain Spell Card in the near future.

Please note: Queen of Bubble's Crit ATK buff is only 2 levels baseline, and scales up to 3 levels with 3 Boosts. The others scale normally up to 3 levels at all times with max Awakening.

Joon needs some Spirit Power to utilize her Last Word at full strength, and for any Breaks she might want to do - after that, give her Yang ATK UP to maximize her damage output. For stat sticks, look to Yang ATK.

In every aspect of her last word, Joon prefers Ordinary Magician as you will only be using her last word to attack. Because her damage is all Yang you’ll want to buff her Yang Attack as much as possible.

For starters, Shakedown is going to want to be leveled up to its max first before moving on to Free Spending Spree as Quick tends to be more favored than Charge. Lastly Shamelessness should be leveled up to at least 9 to maximize the amount of Spirit Power gained, though the Crit Attack boost given from the skill also shouldn’t be slept on as Crit Attack can be useful in the right team comps.

+ Can be used as a Metal Breaker

- Both offensive Spell Cards are Solo

- Greedy buffer outside of Aid spell