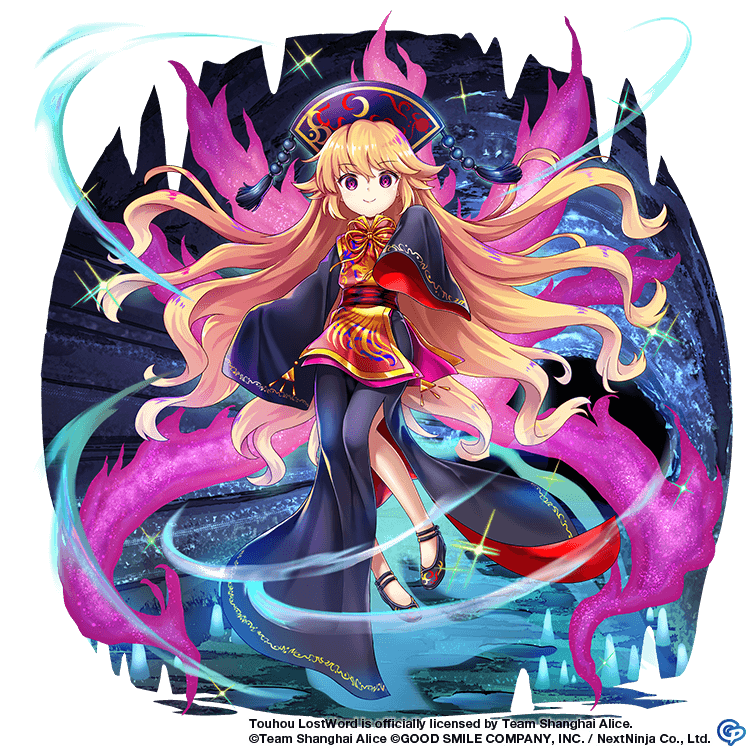 The Spread Shot of Junko, the extraterrestrial being(?) (a Touhou LW original). She attacks with moon-eating dragons. Since antiquity, it was thought that lunar eclipses were caused by oni or giants. Quite a few folk tales involving oni or giants have changed into or merged with tales about dragons. Thus, it is possible to form a mental image of moon-eating dragons.
Chipper Dragon

The Focus Shot of Junko, the extraterrestrial being(?) (a Touhou LW original). She attacks with a moon-eating dragon. All over the world, there are legends about demons and evil gods eating the moon. Perhaps this means that the moon-eating dragons, who rebel against the gods, are a necessary evil that will always be exterminated. 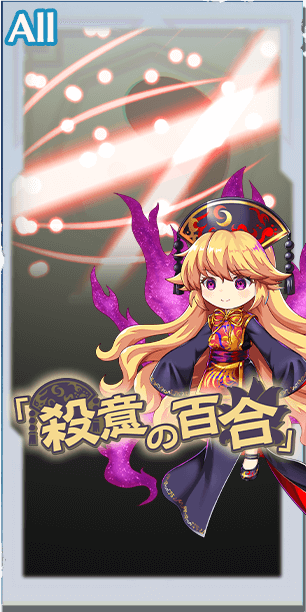 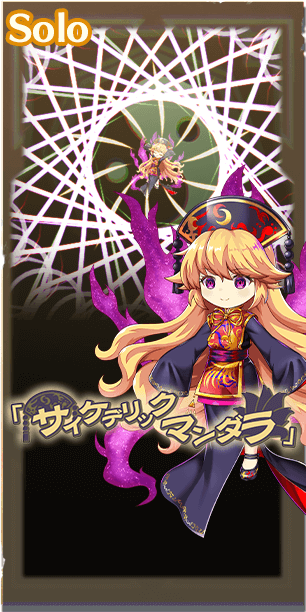 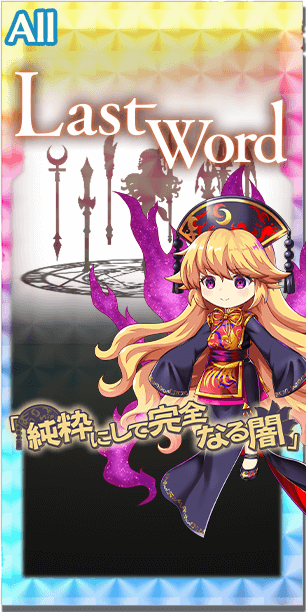 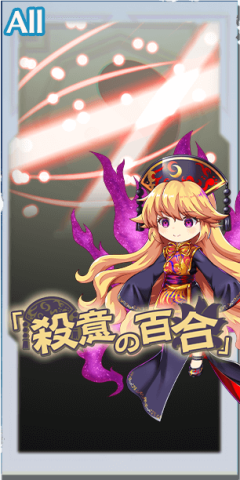 A Spell Card of Junko, the extraterrestrial being(?) (a Touhou LW original). She attacks with bullets imbued with resentment. Our Junko resents the goddess of the moon, Chang'e, and this Junko is no different. However, Junko's resentment has changed over many years due to her power of purification, so it might be an entirely different emotion from the resentment that normal humans know and understand. If one can imagine ''pure resentment,'' they may already be the same as Junko...
*Pre- and Post- effects assume max level. Effects per level can be viewed here.
Pre-Attack Spell Card Effects

Inflicts 1 layer of Barrier Status: Burn to all targets (2 turns). 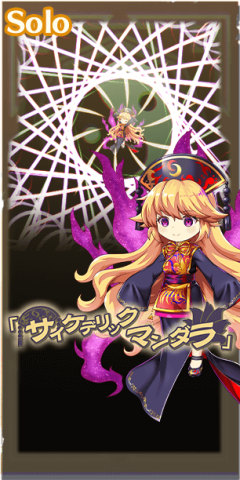 A Spell Card of Junko, the extraterrestrial being(?) (a Touhou LW original). She attacks with entrancing geometric patterns of bullets. Through psychology, it has been discovered that various mental images wriggle about within people's minds. According to a certain renowned psychologist, hidden personalities can be revealed when people draw pictures composed of geometric shapes. The patterns in battles of bullets may also be a window into the mind of the one who fires them.
*Pre- and Post- effects assume max level. Effects per level can be viewed here.
Pre-Attack Spell Card Effects 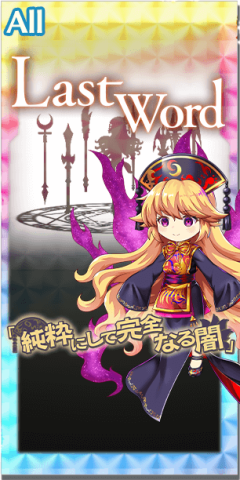 The Last Word of Junko, the extraterrestrial being(?) (a Touhou LW original). This attack could be the beginning or the end of everything―It is timeless and universal. Nowadays, it is generally accepted that the universe only extends so far, has a beginning, and will eventually end. However, there are other theories, such as a universe with no limits, beginning, or end. From this perspective, history and culture are merely fluctuations, and any observation over a substantial span of time or space is within the realm of permissible error. There is no meaning to any of it. In this extreme model of the universe, the only thing that exists is infinite, unchanging, and homogenous spacetime. Perhaps this is what the world would be like if it was completely purified.
*Pre- and Post- effects assume max level. Effects per level can be viewed here.
Pre-Attack Spell Card Effects

B2 Junko was released on March 31st, 2022 in Ultra Festival: Nameless Space Terror.

The B3 universe Lunar Capital is under constant attack from kaiju, which the likes of Kannagi (B3 Yorihime), Otohime (B3 Toyohime), Azusa (B3 Sagume) and the others protect the Capital from. And perhaps the most terrifyingly powerful of them all is Junko, the Nameless Space Terror. Much like her universe L1 form, she is driven by her unfettered desire to crush the Lunar Capital underfoot, only in this universe it's unknown what her motivations for this are. Universe L1 Junko's ability, to "purify", seems to be present in this Junko as well; but there is still too much mystery surrounding her to say for sure that it is the same. All that is for sure is that she is a true threat to the peace of the Lunar Capital, and that her hatred for Chang'e remains true, even if the reasoning may be different. Being such an unstoppable force, it’s no surprise that she is an EX Tier Friend.

Farming wise, Junko is nothing short of amazing. Her Last Word, Pure and Perfect Darkness  has NO elements, which allows it to deal consistent damage regardless of enemies' resistances. She pairs this consistency with powerful buffs and debuffs on her skills. For story card farms, she can farm The Witch of Scarlet Dreams (2-7-1) at 8 SP, Mysterious Sword Master (3-3-3) at 8 SP, The Secret God of the Sky (3-6-3) at 12 SP, Puppeteer and Necromancer (3-11-1) at 8 SP, as well as a future story card stage at 8 SP. However, using Junko to farm 3-6-3 is not recommended because her awakening scaling isn’t as useful generally.

When it comes to challenging content, Junko is an extremely powerful character when fit with the right tools. Her 1st skill, Fear Purification, gives 2 stages of Yin DEF and CRIT Evasion down to all enemies as well as inflicting 3 Freeze anomalies to a targeted enemy. These debuffs allow her to brute force her way through enemies while also setting up damage from other characters with a high CRIT rate. Her 3rd skill, Grudge Purification, also gives team support with 2 stages of Yin ATK up, 3 stages of Accuracy up, as well as 0.5 P to the party. Finally, her 2nd skill, Impurity Purification, selfishly gives her 1.25 P and charge, while also inflicting 3 poison to the targeted enemy for her role to break barriers. Her 1st spell card, Malicious Lily, provides 2 stages of CRIT DEF down and 1 burn anomaly to all enemies for 2 turns while also inflicting 1 extra burn anomaly to an enemy you target. Her spread shot, Little Moon Eater, is notable as it also provides 100% Yin ATK up to herself for 3 turns at 1P.

Her ability to both inflict and break anomalies make her a strong contender for being the best breaker in the game alongside the right teammates. Her spread shot is filled with Star breaks and refunds enough power to repeatedly use 2 boosts as long as her Accuracy is supported. Her 1st spell card breaks both burn and poison anomalies, which already synergize with its burn anomaly inflicting pre-effect and her 2nd skill which applies poison. Her 2nd spell card, Psychedelic Mandela, breaks freeze, paralysis, and blind anomalies. However, the blind anomaly is back loaded which makes it impractical to use for the most part. While her anomaly breaking potential is powerful, it can be chaotic to use. Her 1st passive, Pitch-Black Nebula, is difficult to utilize outside of single enemies due to its random nature and Junko’s relatively hard time accessing blind breaks.

Ultimately, Junko has a kit that is oriented around barrier breaking with anomalies and outputting insane non-elemental damage. While she may need team support to bring out her full potential, she will purify anything that goes her way with no remorse. No matter which way you put it, she won't play around.

Here are the relevant scalings which Junko has:

Spirit Power up is an especially valuable tool for Junko as she is very power hungry with her spell cards in order to reach her anomaly breaks and the like. For setting up, Miracle Mallet helps set up Junko even more with +3 CRIT ATK. Overwhelming Firepower, on the other hand, helps set up Junko’s Yin ATK for her Last Word. Finally, if you just plan to use her Last Word for farming, you can opt for Yin ATK stat sticks, preferring ones with Yin DEF

Puppeteer and Necromancer would be the best slot for Junko as it gives her stats as well as 50% NO element bullet boost. On the other hand, Mysterious Sword Master is a viable alternative as all of her bullets are slash bullets. Alternatively, Yin ATK up cards like Overwhelming Firepower for a better baseline or CRIT ATK up cards like Miracle Mallet if she procs her killer bullets.

Junko wants her 2nd skill raised up first as it grants her the most power for her to add to her attacks. Next, you can focus on her 1st skill to help optimize damage as Yin DEF down will increase her damage more than her 3rd skill. Finally, her 3rd skill should be raised up as it’s powerful team support. However, if you want to use Junko as a team supporter, it may be better to raise her 1st and 3rd skills first before her 2nd skill.