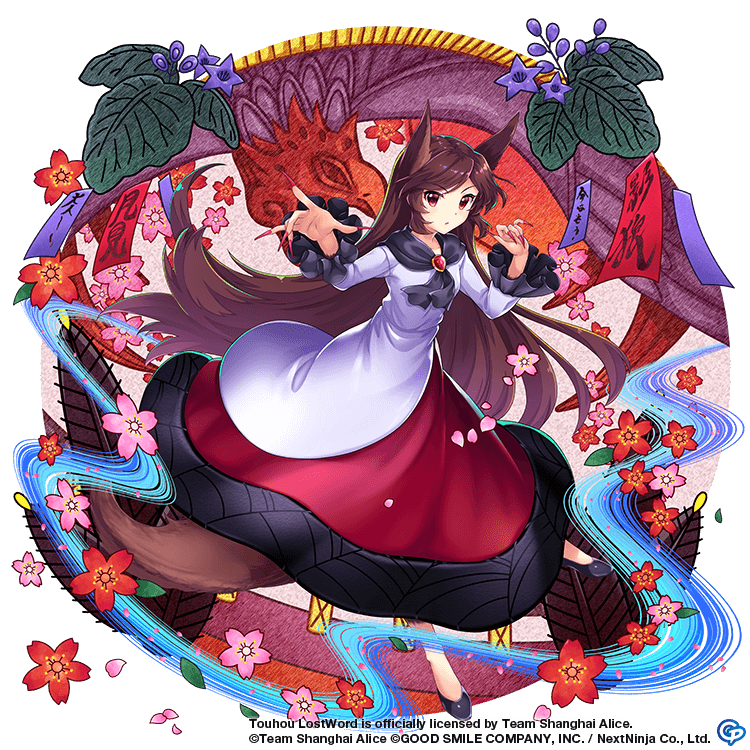 Kagerou Imaizumi's Spread Shot (a Touhou LW original). She attacks with a wolf howl. Wolves howl to signal their pack. It is said that wolves are one of the few animals other than humans that communicate with their voices. This aspect might make wolves especially susceptible to becoming youkai... but there has been no indication of any werewolves in Gensokyo other than Kagerou.
Wolf Fang

Kagerou Imaizumi's Focus Shot (a Touhou LW original). She attacks with her ferocious predator fangs. Everyone fears being bitten by a wolf because they have sharp fangs and a strong jaw. It is theorized that the Japanese word for wolf, ookami, originated from the word for a big bite or great god, which are also pronounced ookami. 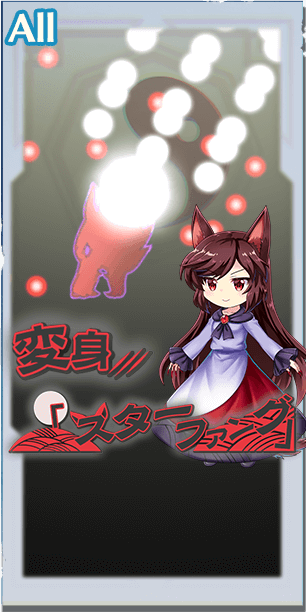 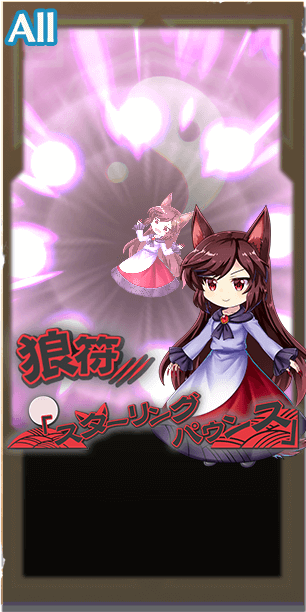 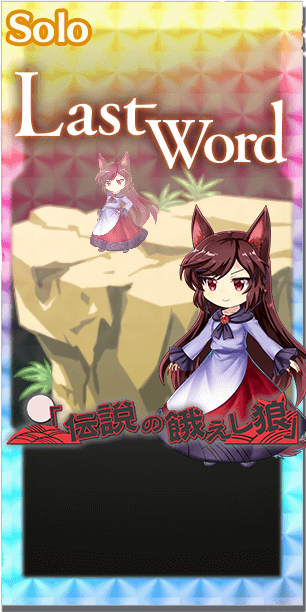 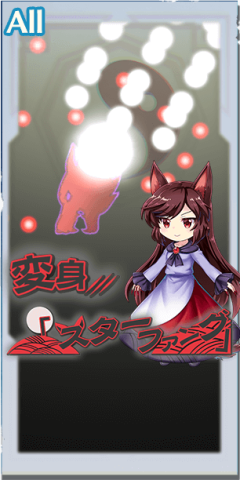 Kagerou Imaizumi's Spell Card. An attack where she dashes through and bites her opponents multiple times. Hunts conducted by wolves are sometimes short, but they usually take their time to hound their prey to exhaustion before finishing them off. The wolf might be a deliberate, cunning, and composed animal.
*Pre- and Post- effects assume max level. Effects per level can be viewed here.
Pre-Attack Spell Card Effects 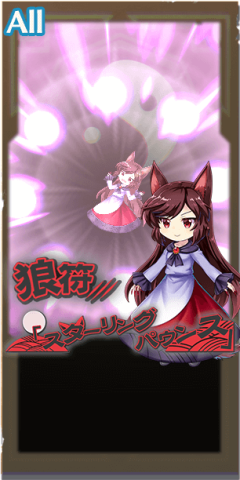 Kagerou Imaizumi's Spell Card. She repeatedly pounces on her targets. Wolves may seem like tenacious hunters, but they often give up chasing their prey before they catch it. If you ever get attacked by a pack of wolves, you should be able to escape as long as you keep running. That is if you keep running for... seven hours straight.
*Pre- and Post- effects assume max level. Effects per level can be viewed here.
Pre-Attack Spell Card Effects 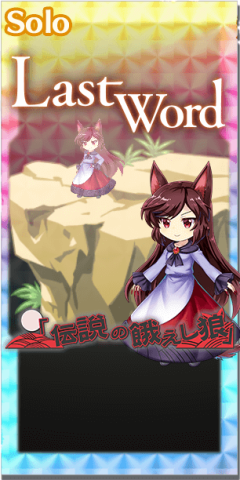 Kagerou Imaizumi's Last Word (a Touhou LW original). She strikes forcefully from a great height with momentum. Since long ago, people who turn into animals have been regarded as demonic beings, like transforming witches or devilish vampires. However, some believe that they were people afflicted with a strange illness or a group of people who were forced to become wild brigands through discrimination.

One of the reasons why such beings have become widely known in modern times is that werewolves and vampires have become a kind of silver screen sensation. The nature of these monsters changed little by little as they gained fame through the cinema and were depicted in various other forms of entertainment, but they always remained a topic of conversation. Everyone knows about werewolves and vampires, and they are very popular, but few people truly believe that they exist.
*Pre- and Post- effects assume max level. Effects per level can be viewed here.
Pre-Attack Spell Card Effects

DMG to effective elements 20% UP.
When using Graze, party's Agility 1 level UP (1 turn).

Who stalks the Bamboo Forest at night in a dress of red, white and black? Kagerou is the resident werewolf of Gensokyo, and part of the Youkai Grassroots Network that rose up in rebellion during the events of Double Dealing Character. Her canine traits allow her to fulfil the requirements of being a Speed-class Friend in Touhou Lost Word, zooming towards the enemy’s destruction. Did you know that Kagerou grows hairier under a full moon? Now you do!

The Witch of Scarlet Dreams naturally enables her higher bullet lines, allowing her to unlock the full potential of her Spell Cards. Offensively, Kagerou is 100% pure Body (Bullet), meaning that cards like Stand-In Shrine Maiden and Eating Contest will do the most to boost her damage output.

Did I mean all her Spell Cards are pure Body? That includes her Last Word, meaning Stand-In Shrine Maiden and Eating Contest work perfectly fine when slotted in here too.

Go with her third skill, Beast Turning for a boost to Accuracy and Yang ATK, allowing her to hit where it hurts. Her second skill, Pampas and Moon should come next, giving her Spirit P and team wide Agility boost which she can convert to slicing damage. Feel free to upgrade her first skill, Extinct Species last. The Agility and Evasion up simply isn’t as impactful as the rest.

- Evasion tanking is iffy at best, especially at low levels.