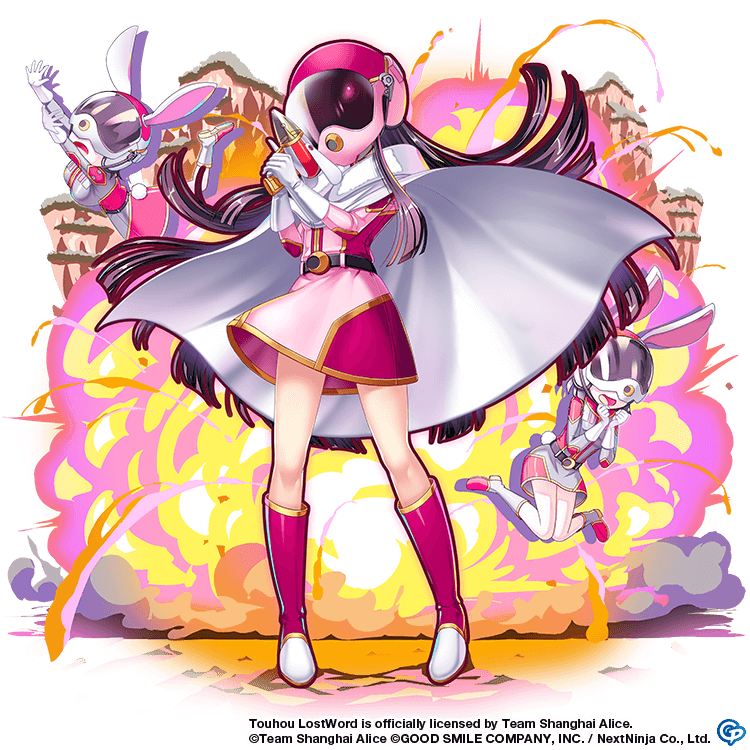 Love Temple of Benevolence and Conscience

The Spread Shot of Kaguya Houraisan from the Capital (a Touhou LW original). She attacks with a righteous laser that teaches love. Kaguya shoots these lasers with her own ability, so she does not need special permission to fire them. Lasers are single‐frequency electromagnetic waves given a direction. Thus, when Kaguya uses her ability to manipulate eternity and the instantaneous to arrange the wavelengths and direction of electromagnetic waves flying nearby, she creates lasers.
Charity Grenades

The Focus Shot of Kaguya Houraisan from the Capital (a Touhou LW original). She attacks with righteous grenades that teach affection. Kaguya also creates these grenades with her ability, so she does not need special permission to use them either. Grenades are much easier to produce than lasers, so powerful grenades are more often used relative to powerful lasers. Explosions are instantaneous discharges, so Kaguya can create grenades by using her ability to condense the heat in her surroundings, fix the heat in place, and then release it whenever she likes. 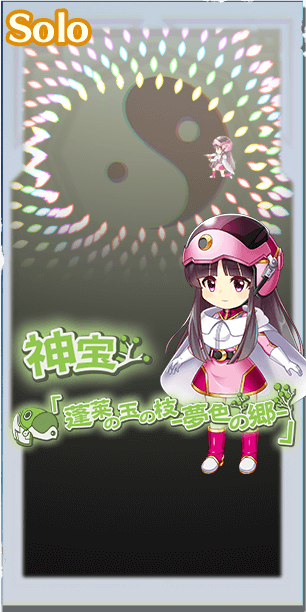 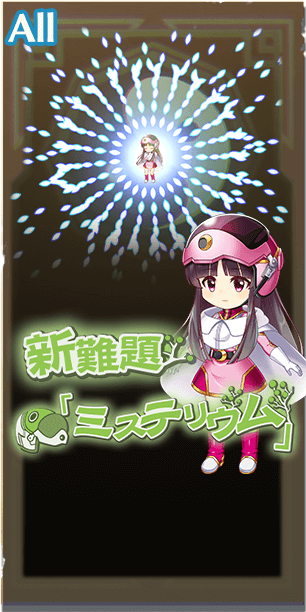 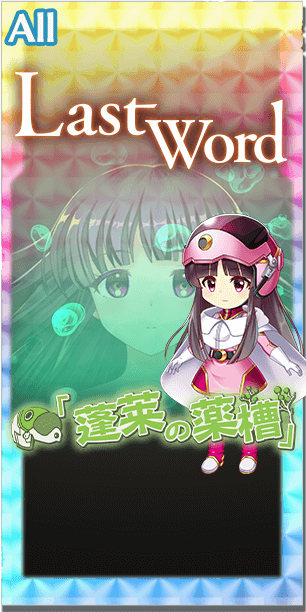 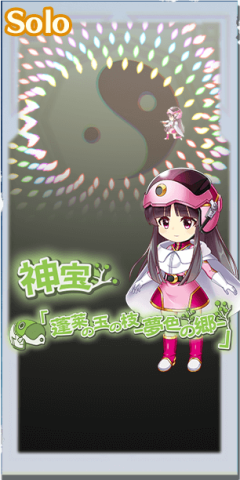 A Spell Card of Kaguya Houraisan from the Capital. She attacks with a genuine jeweled branch of Hourai. The name Kaguya is famous because of Princess Kaguya and her five impossible tasks. According to The Tale of the Bamboo Cutter, the one tasked with finding a jeweled branch of Hourai (a mythical land said to lie in the east across the ocean) was a noble named Kuramochi no Miko. He had an artisan craft the branch for him. Princess Kaguya in the story returns the branch after learning that it is fake and pays the artisan in Kuramochi no Miko's stead. There is also speculation that the character of Kuramochi no Miko was modeled after a member of the Fujiwara clan. Perhaps this is an item that links ''those two'' in addition to the Hourai Elixir.
*Pre- and Post- effects assume max level. Effects per level can be viewed here.
Pre-Attack Spell Card Effects 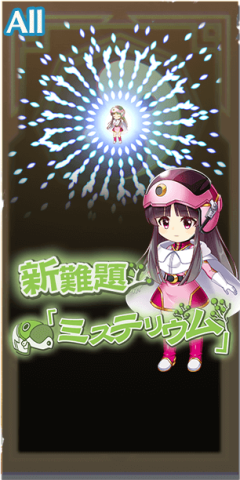 A Spell Card of Kaguya Houraisan from the Capital. She attacks with mysterious substances. You may think it is far-fetched for a mysterious and undefined substance to exist. However, it is now common knowledge that substances are made up of minute particles, and the limits of technology are the only thing at odds with this understanding. In other words, mysterium, an unknown constitute of matter, always exists in your surroundings. Or rather, mysterium is existence itself.
*Pre- and Post- effects assume max level. Effects per level can be viewed here.
Pre-Attack Spell Card Effects 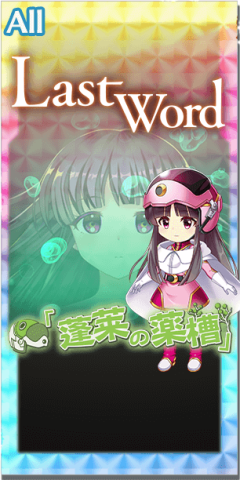 The Last Word of Kaguya Houraisan from the Capital (a Touhou LW orginal). This attack is made possible by the Hourai Elixir. The Hourai Elixir is a secret medicine of true immortality created by the combination of Kaguya's and Eirin's abilities. But it is also a poison that inflicts whoever drinks it with impurity for eternity. It is said that the existence of someone who becomes a person of Hourai is no longer dependent on a physical body and that they can create a body wherever their soul is. Even in the Capital, the people of Hourai are impure beings, and drinking the Hourai Elixer is a heinous crime. So why does this Kaguya have this Last Word...?
*Pre- and Post- effects assume max level. Effects per level can be viewed here.
Pre-Attack Spell Card Effects

B3 Kaguya Houraisan was released on June 3rd, 2022 in Ultra Festival: Love With a Hidden Agenda.

B3 Kaguya Houraisan, Code: Nayotake, and the Love Temple of Benevolence and Conscience, is one of the Four Temples and leader of the group trying to fight back the Kaiju and save the Lunar Capital. Her sense of humor and brightly shining positive attitude permeates the group, raising morale and inspiring hope against the seemingly endless waves of Kaiju. But she’s not just some cheerleader; her ability, “to manipulate eternity and the instantaneous”, is extremely powerful when used with the right amount of knowledge in a given situation, which Kaguya also tends to usually have, being a long-living immortal who has drank the Hourai Elixir. And like her fellow Temples, she is undoubtedly an SS-Tier Friend.

For farming and raw damage, Kaguya is able to prove herself as an Ultra Festival Friend since she is able to solo farm a good amount of stages. Her Yang-only Last Word, Hourai Medicine Tank, is powerful in its own right as it has an abundance of Killers (most notably Youkai and Fairy) that will guarantee critical hits to a wide range of enemies. Since attack buffs and defense debuffs are effectively multiplicative, the combination of 4 Yang ATK UP (1T) from her Pre-ATK effect plus 2 Yang ATK UP (3T) and solo target 2 Yang DEF DOWN debuff (2T) from her Last Word at 1.00P boost further enhances her damage potential. It does not end there though, as a combination of her skills and ability creates more avenues for damage potential growth through agility scaling.
Solo Story Card Farms: 3-3-3, 3-11-1, Hifuu Code E9

For difficult content, she is able to sustain and prolong the survivability of the party while providing decent Agility support. Her defensive niche is all about evasion tanking for her party. As the manipulator of eternity and the instantaneous, she provides the party with at least 8 levels of effective Evasion on the 1st turn, which can then be extended for a long time using her skills and spell cards. This allows her to work in conjunction with Focus-based Friends for prolonged party survivability. However, note that this niche’s effectiveness is usually seen for contents like Elemental EX and Tower.

Kaguya will not miss out in the barrier breaking field as she provides good elemental access and an acceptable amount of anomaly breaks. Starting off with elemental breaks, her Spread Shot, Love and Laser, allows you to access the Moon element at 0P, with a total of 3 when it reaches max boost. She also has 3 Fire elements in this shot which are all accessible in just one boost. Her 2nd Spell Card, New Impossible Request: Mysterium, also provides Moon at 0P but it is more accessible as you only need 2.00P to use all 3 of it. Additionally, she has a total of 3 Star elements which are accessible starting from 1.00P. Lastly, her Last Word, Hourai Medicine Tank, primarily gives access to 3 Star elements and then 3 Moon elements as you boost further. There is also her Focus Shot, Charity Grenades and Spell Card 1, Divine Treasure: Jeweled Branch of Hourai -Dreamlike Paradise-, that gives access to the Moon element at 0P and provides a multitude of elements as you boost further. However, do note that a multitude of elements in an attack is hard to utilize especially when the enemies have only a few elements that they are weak towards. Her anomaly breaks consist of Melting (breaks Freeze barriers) and Toxic (breaks Poison barriers) which is prevalent when you use her Last Word at 2.00P.

When it comes to her passive, she has two that have a 100% chance of success rate. Her first passive, Anti-Kaiju Defense, provides 35% DMG DOWN from Youkai enemies allowing her to survive longer. Her 3rd passive, End of Imperishable Night, gives 0.25P per turn allowing her to have an easier time to access most of her elemental breaks.

Overall, Kaguya is a one of a kind Ultra Festival Friend to have if you are in need of what she offers. While she may not have common party utility such as attack buffs, she makes up for it by allowing your Friends to survive better through the use of evasion-related effects while also doing her best to deal high damage from her Last Word.

The Slice scaling and secondary effects for Kaguya’s attacks are as follows:

As her P gain collection rate is exceptional, giving her Hakurei Shrine Anniversary becomes the best option in contrast to direct P UP cards. However, this should not discourage you to use Witch of Scarlet Dreams if you do not have the aforementioned card. Alternatively, you can take the setup approach and use Myouren Temple Anniversary in order to enhance the damage potential of her Last Word. Finally, you can opt to use Yang ATK stat sticks to augment her turn 1 damage potential, preferring ones with Agility.

Kaguya's best in slot card is Secret Sealing Club Girls as it provides a 50% boost to her Star elements which is a huge boon for her. Alternatively, you may use Frozen-Over Gensokyo or Where the Wind Priestess Is as her Last Word is primarily Liquid bullets.

Kaguya’s 2nd skill, Virtue of Loyalty, should be your priority in leveling up as it allows her to have consistent damage using her Last Word by giving herself 1.25P UP, 2 Yang ATK UP (3T), and 3 Accuracy UP (2T). After which, you should level her 3rd skill, Virtue of Love, as this will allow Kaguya to finally showcase her evasion based tanking niche by making all enemies a hard time to hit your team due to the all enemies 3 ACC DOWN (1T) and party 3 EVA UP (1T) effects it gives, which is effectively 6 EVA UP for the whole party. Additionally, the 3 AGI UP (3T) buff she receives helps her potential damage be higher. Finally, her 1st skill, Virtue of Curiosity, should be leveled up last since you will most use it for its 2 AGI UP (3T) and 3 EVA UP (2T), which can just serve as an extender for the aforementioned buffs, not to mention that the skill cooldown is at 3 turns when maxed so it definitely fits that role.

- Supporting her to reach full potential is hard as she does not have a single CRIT ATK buff in her kit and only a few YANG ATK buffs to work on.
- Outside of Evasion and Agility utility, she does not have any other party utility to speak of.
- Multiple elemental breaks on Focus Shot and Spell Card 1 is hard to utilize against enemies with low weakness counts.