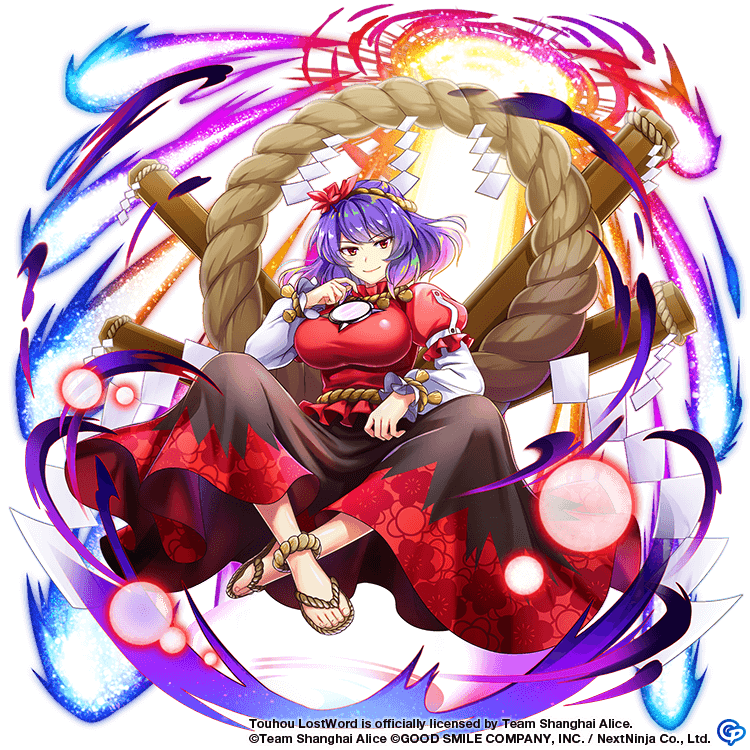 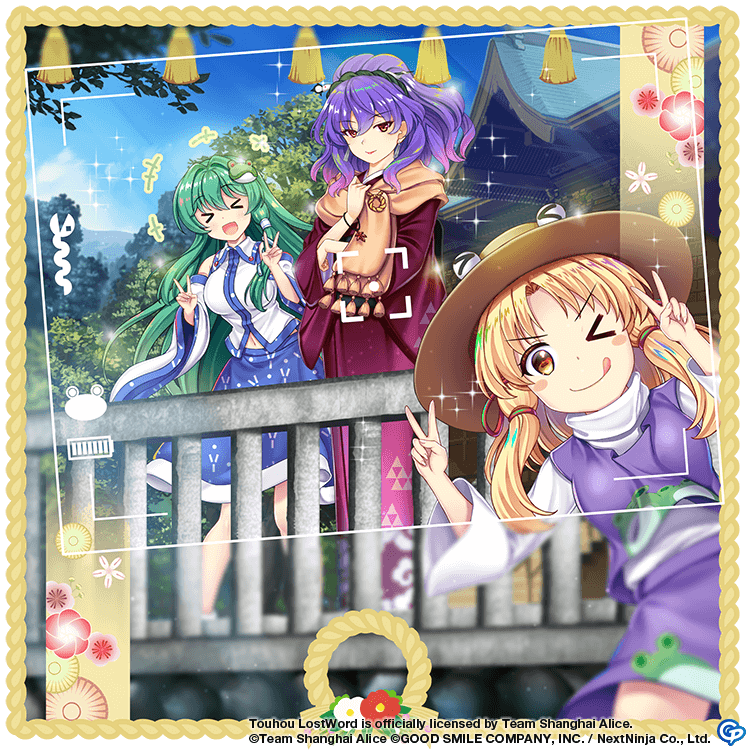 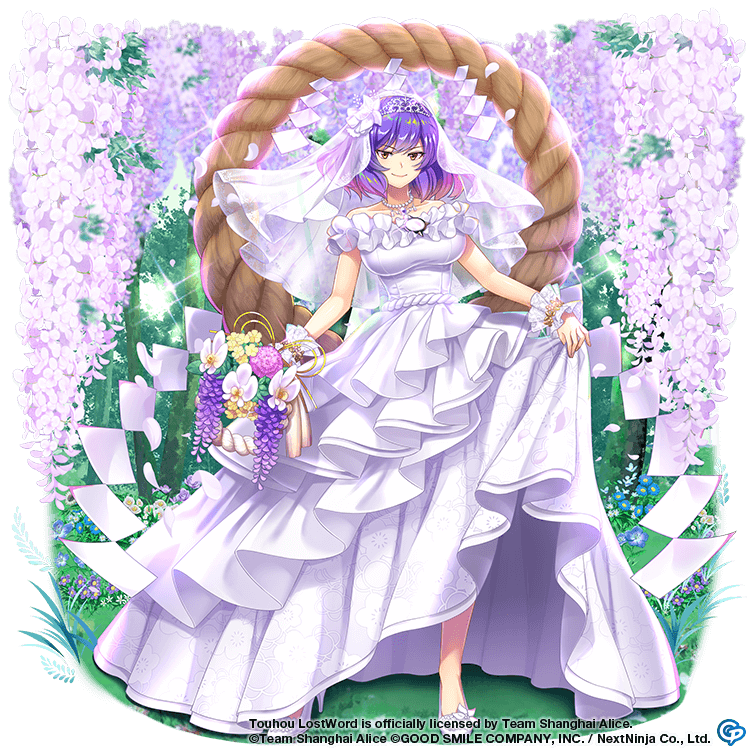 Kanako Yasaka's Spread Shot (a Touhou LW original). Water falls from the heavens to bless the earth in this bullet hell attack. This is one of the self-proclaimed seven wonders of Moriya Shrine, perhaps as a way to capture the interest of believers. Some kappa joke that this is just the result of a leaky roof, but Moriya Shrine claims that this water from the sky has various beneficial effects.
Ancient Cedar of the Spring Court

Kanako Yasaka's Focus Shot (a Touhou LW original). This attack uses the qi of a cedar tree said to have the power to bring lovers together. Moriya Shrine has a number of obvious sightseeing spots, and one of them is a cedar tree with a forked trunk. The two halves of the trunk share the same roots and have grown intertwined, which does seem like it could help with matchmaking. That said, it probably produces a lot of pollen during the spring... Achoo! 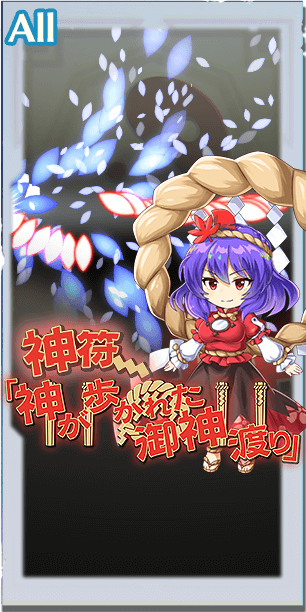 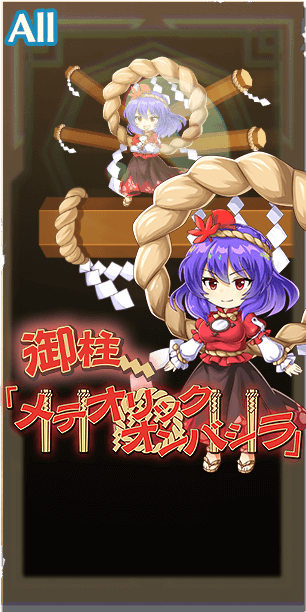 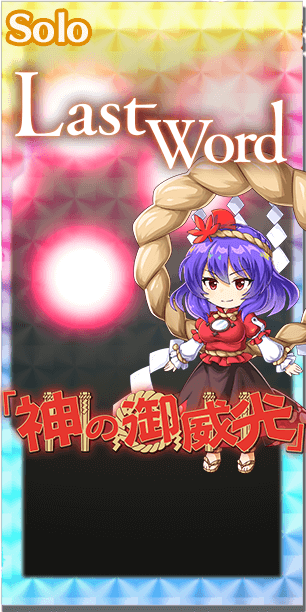 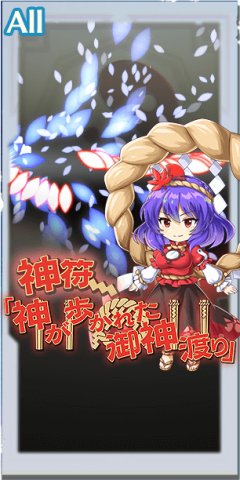 Kanako Yasaka's Spell Card. This attack recreates the phenomenon of omiwatari, or the cracks that form across the frozen surface of Lake Suwa. These cracks are said to be formed by gods who walk across the ice, and this attack follows the gods' paths. When humans see traces left behind by gods, they build their own culture on top of them. On the other hand, tengu claim that these traces are actually made by fairies in the night.
*Pre- and Post- effects assume max level. Effects per level can be viewed here.
Pre-Attack Spell Card Effects 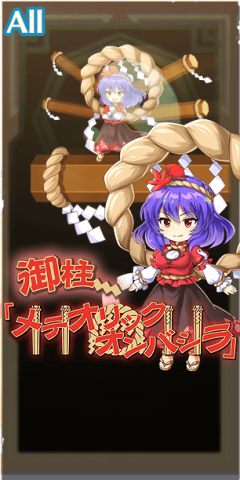 Kanako Yasaka's Spell Card. She lets countless onbashira, or divine pillars, rain down in this attack. It resembles the real world Onbashira Festival, during which tree trunks are felled and then slid down a mountain (with people riding on them!) so that they can be raised as new pillars for Suwa Shrine. Tengu say that this is a strange festival, and it is hard to deny that. The huge wooden pillars come in many shapes and are said to have a variety of meanings to them.
*Pre- and Post- effects assume max level. Effects per level can be viewed here.
Pre-Attack Spell Card Effects 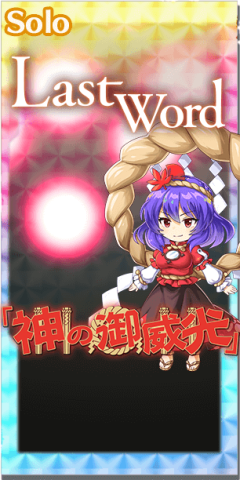 Kanako Yasaka's Last Word (a Touhou LW original). This attack was prepared in order to chase down a certain amanojaku. This is different from her usual Last Word, but she uses this attack instead, as it is virtually impossible to evade without the use of unfair items.
*Pre- and Post- effects assume max level. Effects per level can be viewed here.
Pre-Attack Spell Card Effects

DMG from resisted elements 20% DOWN.

Kanako Yasaka was released on July 29th, 2021 in Festival: Gods of Sky and Land.

Kanako Yasaka is a shrewd, ambitious god. Many years ago, she overtook the lands of Suwako Moriya, and attempted to further raise her power. From there, the two formed an agreement: Kanako would be the sales, and Suwako would handle fulfilment - that is, Kanako would get people to agree to pray to the now combined Moriya shrine, and Suwako would provide them with miracles. This was all well and good until humans began to lose faith in gods, leading to Kanako deciding to head to Gensokyo in the events of Mountain of Faith, which led to a chain reaction that shook the land (and by extension, Touhou!) forever. Now, the Avatar of Lakes and Mountains is here to provide divine wrath for you, in the form of an E-Tier Friend.

For farming purposes, Kanako’s Last Word deals decent enough damage to farm any one boss event stage she has a Killer against, or that is weak to her, with a wide enough range of Killer to be generally applicable. That said, that’s somewhat limited, and not her primary strength in farming: that would be her ability to farm the Chapter 3 Act 1 Story Card in 4 turns on full auto when combined with partners in two-unit teams such as Marisa Kirisame (Witch of Scarlet Dreams), or Suika Ibuki.

For harder fights, anako shines if you're willing to spend many turns on stall compositions, due to access to Focus up on her basic shots, high defensive stats, and self healing & DEF Up. If you aren't, she's unfortunately situational. Her Solo Last Word has a reasonably wide range of Killers, being able to take on humans, dwellers of water, and Gods, and thus scales well with Yang ATK support. Whilst she has a lack of Yang ATK Up, her first Spell Card allows her to go all in on Story Cards which provide her Yang ATK Up, due to the Spirit Power it grants. Outside of that however she is an extremely selfish tank, with low Focus values and DEF Up which only affects herself. Her access to Barrier Breaks is also decidedly below average, with only 1/1/2 Water Breaks for 0/1/2 Power on her first Spell Card and 1/2 Wood on the second.

Still, you can definitely make Kanako do some damage if you load her up with the right Story Cards and take your time, and she’s definitely an asset for helping farm a very potent Story Card. Just don’t expect too much in the way of tanking.

Here are the chances for Kanako’s secondary effects (per bullet):

As Kanako’s Spell Cards are already All targeting, and the first one gives her 1 Spirit Power, she primarily prefers Spell Cards which give her Levels of Yang ATK Up, such as Members of the Yakumo Family (which is preferred as it also gives her DEF, to facilitate her role as a tank). Depending on your tolerance for reattempting stages, you may also want to give her an Accuracy boosting Story Card on her first Spell Card if you need it to Break, as its second Water Break only has 1 hit, albeit at 85% Accuracy. When using Kanako to farm Chapter 3 Act 1, she absolutely needs cards with Levels of Yang ATK Up in all of her Spell Cards. Otherwise, for events, give her Yang ATK Up for fillers, as she has no Hard scaling.

Kanako’s Last Word is already 85% accurate, and the damage is somewhat evenly spread out, mitigating the impact of any one hit missing. Due to this, and the lack of ATK Up in her kit, the goddess prefers any Story Card which provides Levels of Attack Up, with Members of the Yakumo Family being slightly better than Ordinary Magician as it helps her stay alive (unfortunately she has no Hard scaling).

Divine Aura should be levelled up first, as it has only an abysmal 1 Level of Focus UP at level 1. After that, Kanako is generally durable enough as is, so her other skills can be saved until you’re out of priority skill training targets. At that point, Legend of Flood Control in Kawai should be leveled up first, as it provides better returns than God of Prosperity, which should be saved for last. They both do the same thing, so it just makes more sense to level up the one that gives more for level ups first.

+Last Word deals solid damage if backed by a Killer, of which Kanako has a wide range (Humans, Dwellers of Water, and Gods)
+First Spell Card provides 1 Spirit Power, which makes Kanako very flexible
+Can farm the Chapter 3 Act 1 Story Card in 4 Turns with certain teammates in 2 unit teams

-Kanako deals low damage if she doesn’t hit a Killer target
-Needs time to setup to compare to other nukers, due to relying on Story Cards to provide Yang ATK Up
-Below average Break access
-Fully selfish tank, has no way of keeping her tank alive outside of Focus
-Low Focus values

Should You Pull? “Butterfly of Blue Skies Pick Up Prayer”