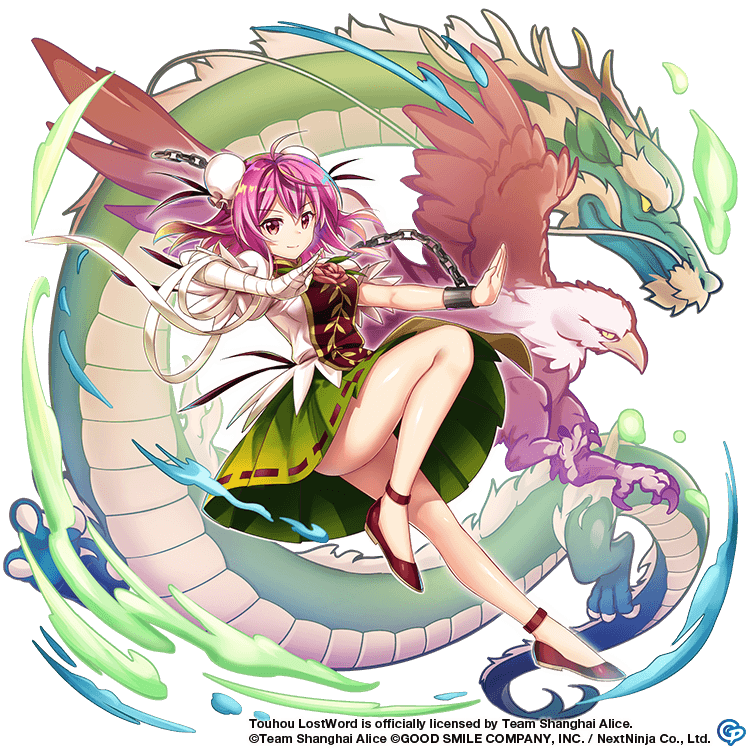 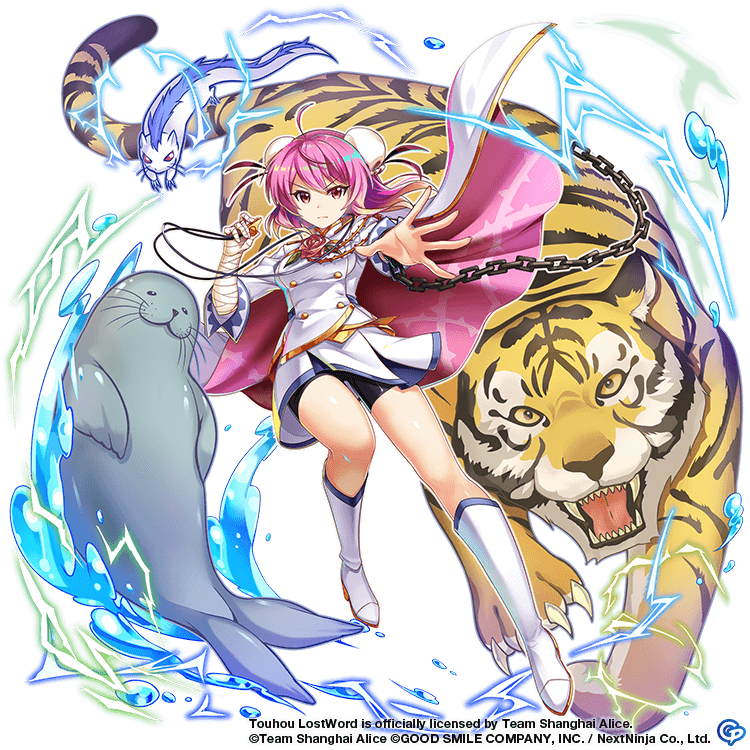 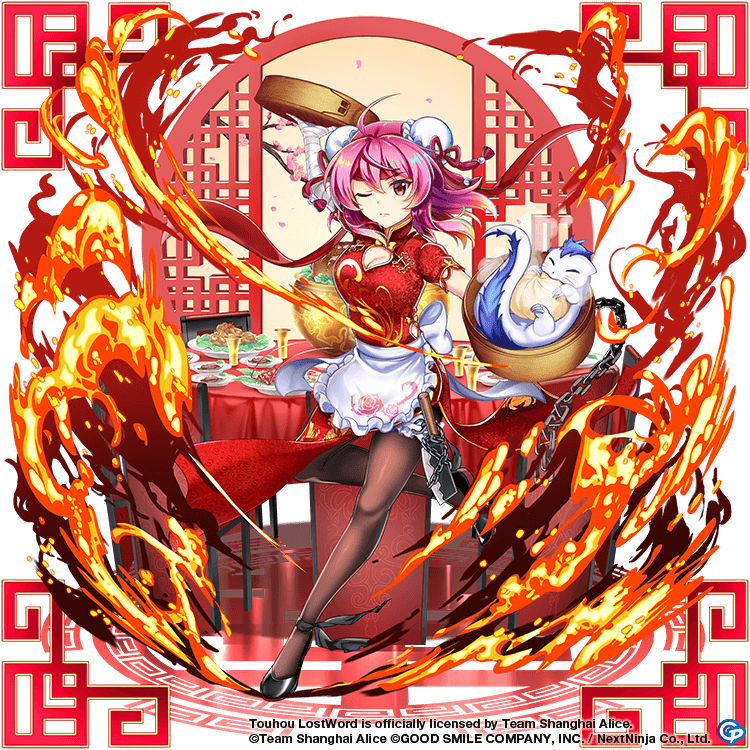 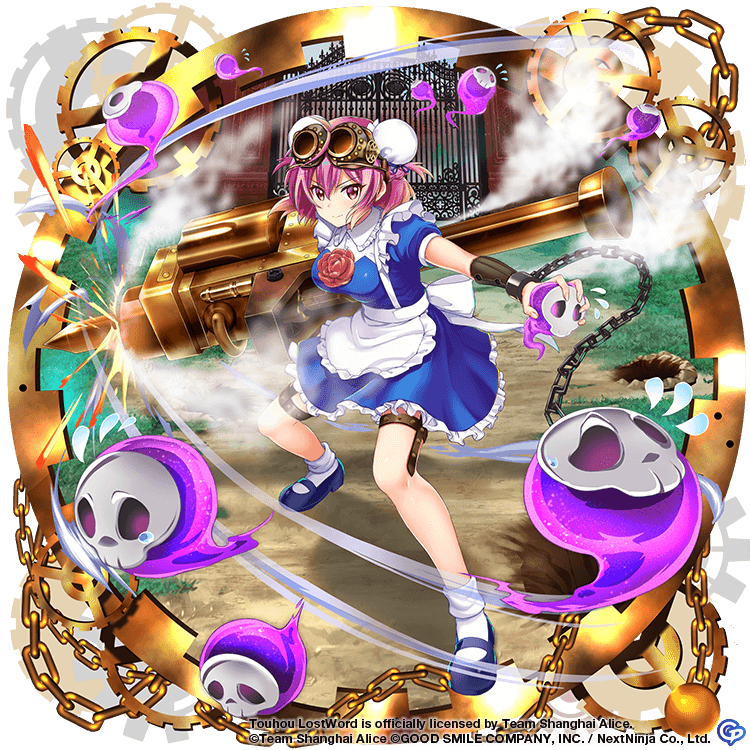 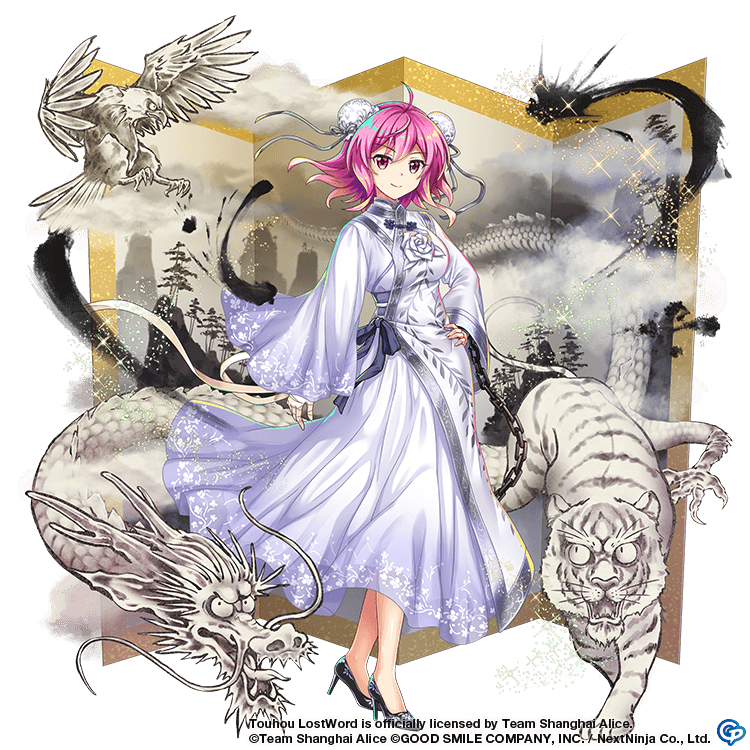 Kasen Ibaraki's Spread Shot (a Touhou LW original). This attack uses jintsuu, or transcendental power, to shoot bullets of air. The transcendental power mentioned here refers to supernatural techniques only obtainable through virtuous living and meditation. Kasen has this power because she is a hermit. Hermits have a very complicated history.
Kanda

Kasen Ibaraki's Focus Shot. Kasen uses Kanda, one of her pet giant eagles, to attack her targets. Apparently, the name Kanda comes from the name of a hermit in a certain book of tales. 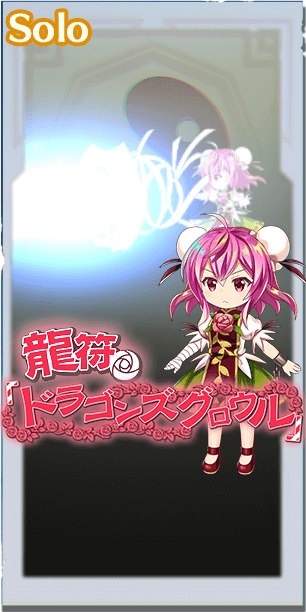 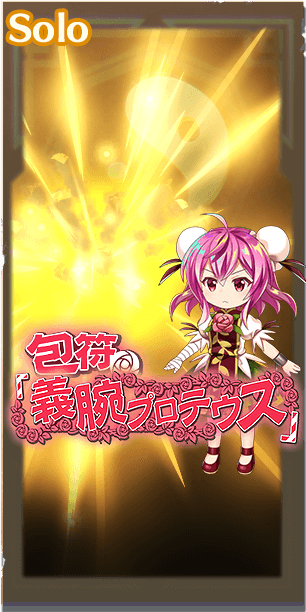 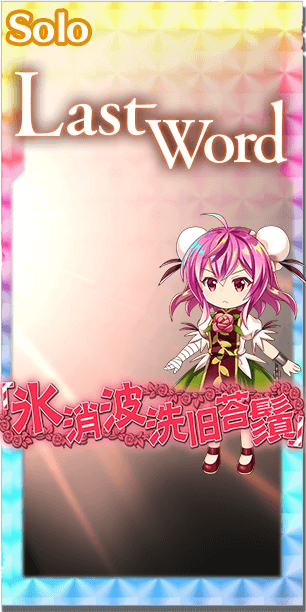 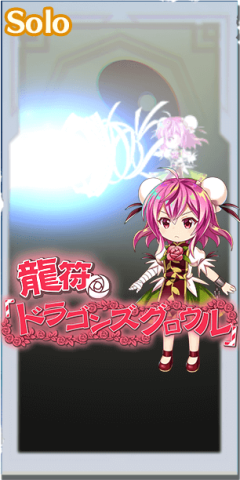 Kasen Ibaraki's Spell Card. She positions her bandaged arm to make it look like a dragon and shoots out compressed qi in this senjutsu attack. Its force is as intense as a bellowing dragon.
*Pre- and Post- effects assume max level. Effects per level can be viewed here.
Pre-Attack Spell Card Effects 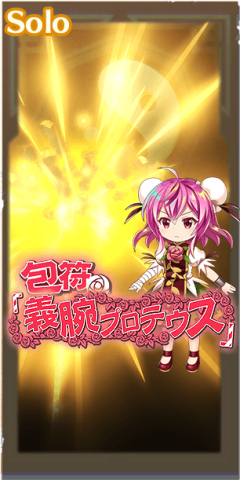 Kasen Ibaraki's Spell Card. She uses her unwrapped bandage to make a false arm, wrap up a large rock and throw it with senjutsu. This is normally a technique which binds and strikes its target, but this time, it has been devised with long-range attacks in mind. Proteus is the name of an ancient Greek sea god, which is where the word protean (meaning versatile or mutable) comes from. Perhaps the name of this attack is referencing the arm's changing forms.
*Pre- and Post- effects assume max level. Effects per level can be viewed here.
Pre-Attack Spell Card Effects 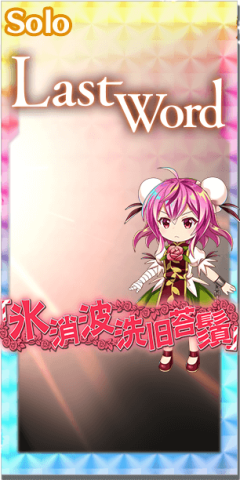 Kasen Ibaraki's Last Word (a Touhou LW original). Kasen imbues her bandaged arm with scorching heat before spearing her ultra hot hand through her target to make them explode. The name of the attack comes from an old Japanese poem.
*Pre- and Post- effects assume max level. Effects per level can be viewed here.
Pre-Attack Spell Card Effects

When using Boost, own Accuracy 1 level UP (1 turn).
DMG to resisted elements 40% UP.

Kasen Ibaraki was released on June 11th, 2021 in Festival: Sages of Gensokyo.

The mysterious one-armed hermit, Kasen Ibaraki, also known by her pseudonym of Ibarakasen, is - well, she’s a lot of things. She’s one of the sages of Gensokyo - a group who collectively created the land and work behind the scenes to keep it safe, though she disagrees heavily with the other sages on just about everything. She’s an oni, who desperately attempts to keep it under wraps, although it’s something of an open secret between her gluttony, fear of common oni weaknesses such as baked soybeans, conspicuous hair bun which certainly aren’t hiding horns, and general fighting prowess. She openly preaches lofty ideals and genuinely does want everyone to be better people, but then also gluttonously devours sweets and tends to act somewhat hypocritically. Still, overall she’s a nice woman you definitely want on her side - certainly not least of which because she’s, well, both an Oni and a Sage, with enough power to more than back up her S Tier Friend status.

For farming purposes, Kasen excels at any stage where there is both one wave and one enemy. Her Solo Last Word does plenty of damage at 1 Power, which is especially relevant as those stages tend to have bosses with higher health totals. She also doesn’t have to worry about resistances, as her passive ensures that enemy resistances are no problem.

For harder fights, Kasen is strictly a selfish damage dealer, and as such has two primary uses. The first is simply blasting a single target - her Last Word deals considerable enough damage even with a single turn to work with, and this can often be enough. But her main niche is any fight in which she has 2 to 3 turns to set up beforehand - hitting both 3 Power and a large amount of Yin, Yang, and Cri ATK Up from her Spell Cards. If given those turns, she won’t even need external support or a Full Break - whoever you point her at is probably already knocked out, they just don’t know it yet. A good thing too, since unfortunately her Skill 2, an important part of her damage profile, also gives her Quick, making her harder than most to support.

Beyond that, she also brings somewhat average Element Breaks, but nothing special. Her Spell Card 1 has 1/1/2/3 Solo Water Breaks at 0/1/2/3 Power, and her Spell Card 2 has the same but Earth instead. Her Last Word also has the same layout but for Fire, but - why would you ever use it to Break in the first place?

Overall, Kasen’s both a respectable farmer, and a solid selfish damage dealer in both short and especially longer harder fights. Just keep in mind damage is all she’s bringing, and this hermit will bring her devastating strength to bear for you. So long as she’s got enough snacks, of course.

Here are the chances for Kasen’s secondary effects (per bullet):

Kasen’s Spell Cards are primarily a vehicle to boost her own damage, via boosting her own stat stages, and as such Midnight Tea is generally the best possible Story Card, as it both gives her Yin & Yang Atk and also gives her Spirit Power, which lets her also dish out some Element Breaks before her Last Word if needed, which is perfectly complimented by her passive giving her Accuracy every time she Boosts. For stat sticks, anything that gives both Yin and Yang ATK will work, though as Midnight Tea already gives both, it doubles as a good stat stick.

Due to Kasen already boosting pretty much all of her stats by a tremendous amount, and being perfectly accurate both for farming and harder fights, she generally prefers a damage type booster, as they have a multiplicative effect with ATK Up. Eating Contest is easily the best she has access to through that lens, but Mini Hakkero is also acceptable.

Kasen’s third skill is easily her most important, and should be prioritized first, as the 1 Power it provides at max rank makes all the difference both for farming and for harder fights, on top of the Atk UP. After that, her second skill is also important, and should be brought up to level 9 as soon as possible - you can delay level 10, as it only lowers the cooldown by an additional turn, which is rarely useful. Lastly her first skill is kind of - just never really useful, and can be saved for when you have no targets to train in the dojo and just want to max out your Kasen.

- Entirely selfish damage dealer with no utility
- Although she doesn’t entirely need support, for the rare fight she does self-Quick can make it tricky to support her.
- The number of Element Breaks on her Spell Cards is merely average; both Spell Cards and her Last Word have 1/1/2/3 Breaks at 0/1/2/3 Power.