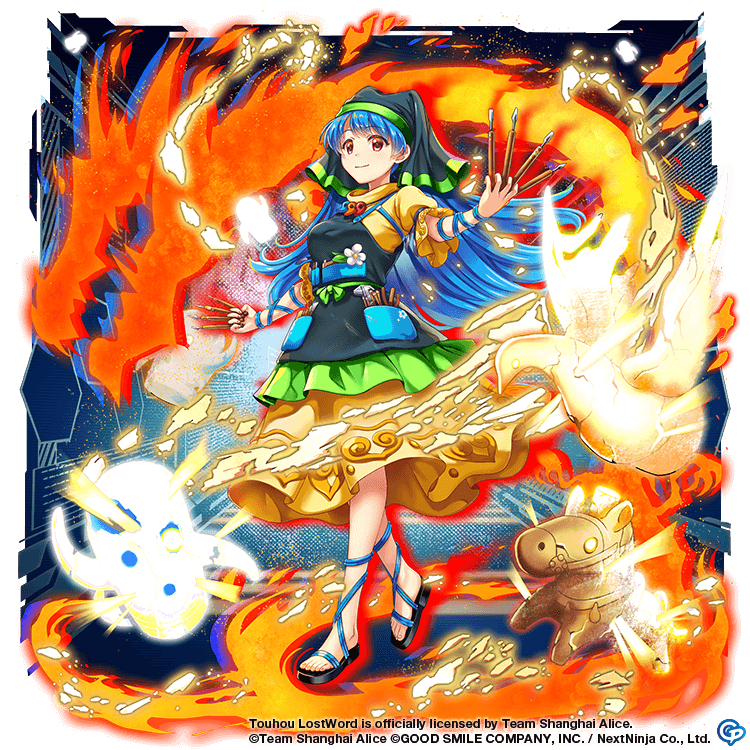 Keiki Haniyasushin's Spread Shot (a Touhou LW original). She attacks with bullets in square-shaped patterns. There are hardly any perfect squares in nature. They are symbols of security crafted by civilizations that are regularly seen in cities and machines.
Perfect Circle Sculpting

Keiki Haniyasushin's Focus Shot (a Touhou LW original). She attacks with bullets in perfect circle patterns. It is extremely rare for perfect circles to exist in nature. They are symbols of order crafted by technology that are essential for the efficient use of energy. 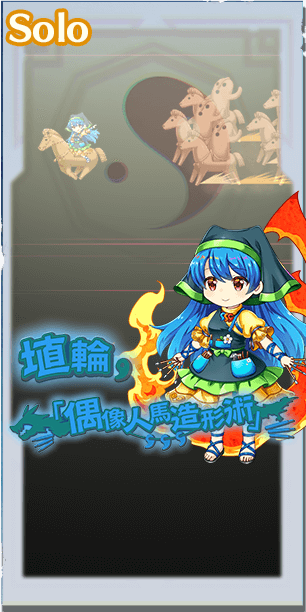 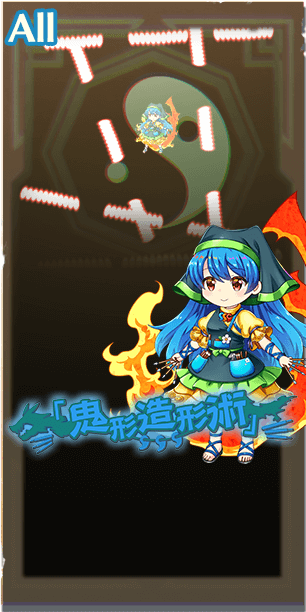 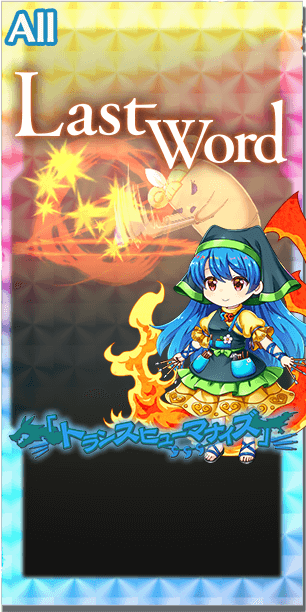 Keiki Haniyasushin's Spell Card. Horse-and-rider idols created by Keiki charge into her target. Wild animals are primordial gods, but domesticated animals are the gods of a new era. They have become a weapon of war that eternally protects the lives of humans. Humans themselves might be something similar.
*Pre- and Post- effects assume max level. Effects per level can be viewed here.
Pre-Attack Spell Card Effects

Keiki Haniyasushin's Spell Card. She attacks with a peculiar sculpting art. Nowadays, it is normal for bizarre and eccentric creations to be called art. It is not often mentioned, but this art is the same as an ''artifact,'' an object brought about by skill or craft. While these artworks may seem odd to some people, they might convey a message to others.
*Pre- and Post- effects assume max level. Effects per level can be viewed here.
Pre-Attack Spell Card Effects

Keiki Haniyasushin's Last Word (a Touhou LW original). She reshapes her opponents with earth and water. When earth is combined with water, it becomes clay―a material that can be shaped into any form. When fire is added, the water evaporates, and the earth is baked into a hard ceramic. The manipulation of the Five Phases centered on the Earth Phase creates a body more perfect than any form composed of flesh. Perhaps this heralds the coming of a new plain-faced age where humans ensure that other humans constantly worship and dedicate faith solely to the Sculptor God.
*Pre- and Post- effects assume max level. Effects per level can be viewed here.
Pre-Attack Spell Card Effects

Keiki Haniyasushin is commonly titled the Sculptor God for her ability to create idols and similar sculptures. Of course, a divine spirit’s power wouldn’t just end there, as she can animate her figures and make them fight for her own cause. During the incident in which animal spirits from Hell invaded Gensokyo, Keiki would use her powers to fight against the animal spirits and liberate the human spirits, creating the haniwa Mayumi Joutouguu in the process to serve as the head of her army. This doesn’t mean Keiki herself can’t fight back, which she shows when confronting the animal-possessed protagonists as the final hurdle in the conflict between the spirits of Hell. LostWord made sure to respect her power as well, as she stands very tall as an SS-Tier Friend.

In terms of raw power, Keiki has many tools to sculpt idols and devastating damage alike. Her Last Word, Transhumanize, may be backloaded with a 1-1-3 bullet spread to somewhat hurt her turn 1 damage output, but she more than makes up for it with the strength she gets upon setting up. With 2 levels of Yang ATK UP (3T) and 3 levels of Accuracy UP (3T) before activation, Keiki’s damage at 3P is just incredible, even more so when you are hitting her Killer bullets, which include the rather popular Human. It helps that Keiki does not need to rely on her Killers for great damage, and along with how easy Transhumanize is to support due to being Earth-only, Yang-only, and Heavy bullet-only, Keiki’s damage output can easily match the rest of the top tier competition.

When it comes to challenging content, Keiki has many more crafts to throw around. Her utility is already very high thanks to her barrier breaking potential. She starts off strong with a 0P Earth break on her Focus shot, Perfect Circle Sculpting, allowing her to spam Earth breaks whenever necessary. On top of that, all of her spells focus hard on being great Earth breakers with additional Star break utility, a very useful element. With 4 Earth/2 Star on her first spell, Haniwa: Horse-and-Rider Idol Sculpting Art, an even split of 3 Earth/3 Star on her second spell, Oni-Shaped Sculpting Art, and an Earth-only option in the form of Transhumanize, Keiki makes herself out as a wonderful Earth breaker with a niche in Star breaks as well. That isn’t the end of her breaking potential however, as Oni-Shaped Sculpting Art has Toxic and Incineration bullets at 2P and 3P respectively for both Poison and Burn anomaly breaking action. While her kit lacks real Burn infliction, Oni-Shaped Sculpting Art itself inflicts Poison anomalies: either 2 with no boosts or 3 when boosted. You want to boost to 2P to get to the anomaly break in the first place, so more often than not Keiki will get 3 breaks on all foes not immune to Poison at 3P, something that is very good for an All-targeting spell.

Outside of the breaks, Keiki provides some great team support as well. While she does have instances of greedy buffing, such as Haniwa: Horse-and-Rider Idol Sculpting Art’s 2 levels of Yang ATK UP (3T) and Transhumanize’s buffs, Oni-Shaped Sculpting Art does even more in terms of viability by debuffing all targets’ CRIT Evasion, either 1 or 2 levels (3T) just like the Poison anomalies’ boost-based chances. Her third skill, Idolization, has the same debuff but for 3 levels instead (1T) as well as 2 levels of teamwide Yin ATK UP (1T). It is unfortunate that these buffs last for a single turn, but they are on a skill with a 4-turn cooldown to slightly mitigate this. Her first skill, Planned Production, provides a bit more team support in the form of 3 levels of Yang DEF UP (3T), which also slightly helps Keiki’s Hard scaling. Her final team utility may appear to be the Yang ATK she provides from Grazing, but Transhumanize comes with a 100% chance to debuff Yang DEF at 1P and a 100% chance to debuff Evasion at 2P just for some extra assistance. Not like her support was lacking before this.

As expected for a sculptor god, Keiki has almost everything going for her. Amazing damage after setting up, many barrier breaks, team support…she even gets both 1.50 Spirit Power and a barrier from her second skill, Divine Authority, both increasing her survivability and access to more powerful attacks, especially considering the Yang ATK she gets from Grazing. Overall, you can definitely rely on Keiki to both Create…and Destroy!

The secondary effects and Hard scaling for Keiki’s attacks are as follows:

Witch of Scarlet Dreams will help Keiki gain Spirit Power for both her anomaly breaks on her second spell and power on her Last Word, while being a rather simple card to farm for. However, Dancer in the Puddle still has some value for being a good Spirit Power increase while also having great Yang-related stat sticks. Outside of this, Keiki is in a weird spot in where she doesn’t need many Yang ATK buffs, as she almost maximizes those all by herself. Instead, only run one Yang ATK UP card, preferably Waiting in Comfort due to its Yang DEF and stat stick utility, and from there run other Yang-based stat sticks or perhaps even CRIT ATK buffs if you want to maximize critical damage.

Keiki has three great options for her Last Word: The Secret God of the Sky, Dropping Keystones, or Idola-Deus. Secret God is a flat 50% buff to the whole attack, due to it being only Heavy bullets, with an extra 2 levels of CRIT ATK UP for extra CRIT damage, especially if she is hitting her Killer bullets. Keystones may be better in some instances due to getting both a 30% Heavy boost and a 30% Earth boost, both of which are what her Last Word are composed of. Idola-Deus isn’t as downright insane as these other choices, but is still good due to its 40% Earth buff as well as some extra Yang ATK buffs and Yang stat sticks

Both Keiki’s second skill, Divine Authority, and her third skill, Idolization, are good in their own ways. Since Idolization provides more team support and more increased buffs (in self-Yang ATK, team-Yin ATK, and enemy Evasion DOWN), it will likely end up being useful in most situations, making it a first priority. Still, Divine Authority should be next, as it gives you 0.50 extra Spirit Power along with a quicker turn cooldown from 7 to 6. Her first skill, Planned Production, should still be leveled for its increased Yang DEF buff, but the Accuracy buffs is not as necessary due to her Last Word doing the same buff.

+ 0P Earth on Focus shot
+ Amazing Earth, Star, and anomaly breaks on spells
+ Poison on second spell can be immediately broken at 2P
+ Incredible setup damage via Last Word
+ Team utility in the form of CRIT and Yang support

Memories of the Lunar Sea Mystic Code skill rate oddity
So while leveling up this Mystic Code Ive noticed that its third skill ‘Punishment’…
Busti's Stall Diary Chapter #518 : Yes I am Your Maid But You Have to Serve Me
Source Source Source Source Source 1168 posts - 45 participants …
On the game's old files
My phone was acting up, so I was clearing up some space. As I was, I looked and saw…
Regarding SE.RA.PH. quests availability after the event
Once the current event ends, I get that the main interlude quests will be added to the…
Is np1 fran a good aoe ? Answer needed asap. Thanks
On my alt, I have a lv70 spartacus, and lv80 maou for my neutral farming, but maou…
Read More