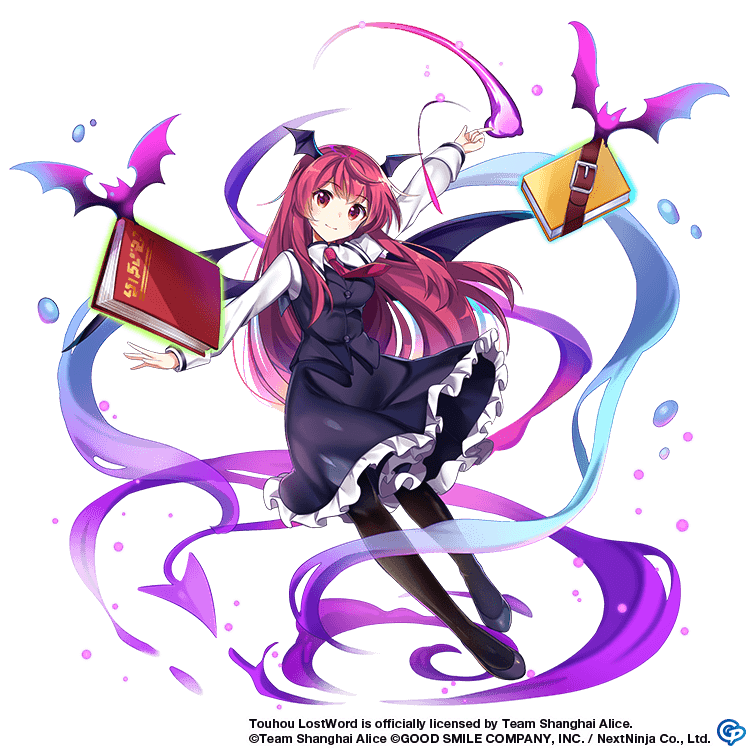 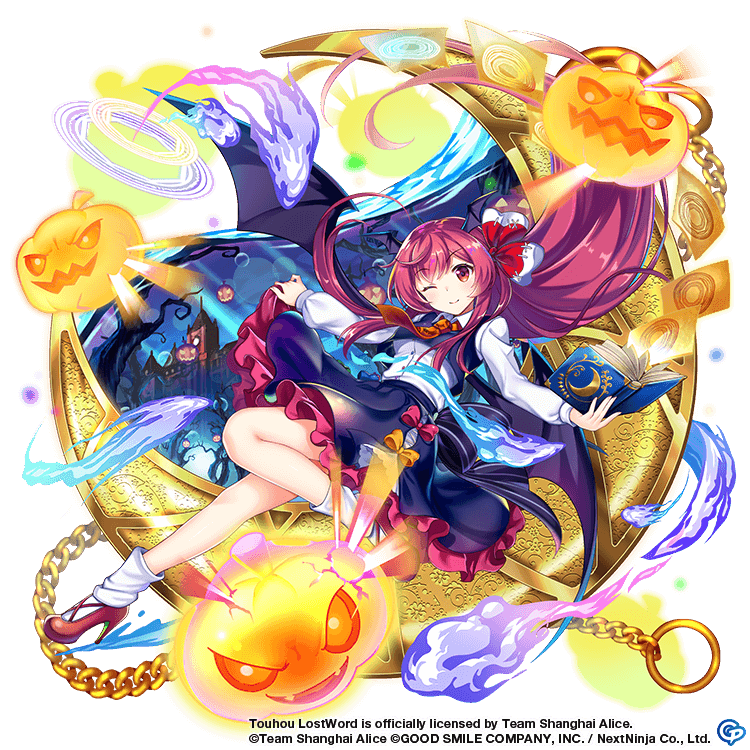 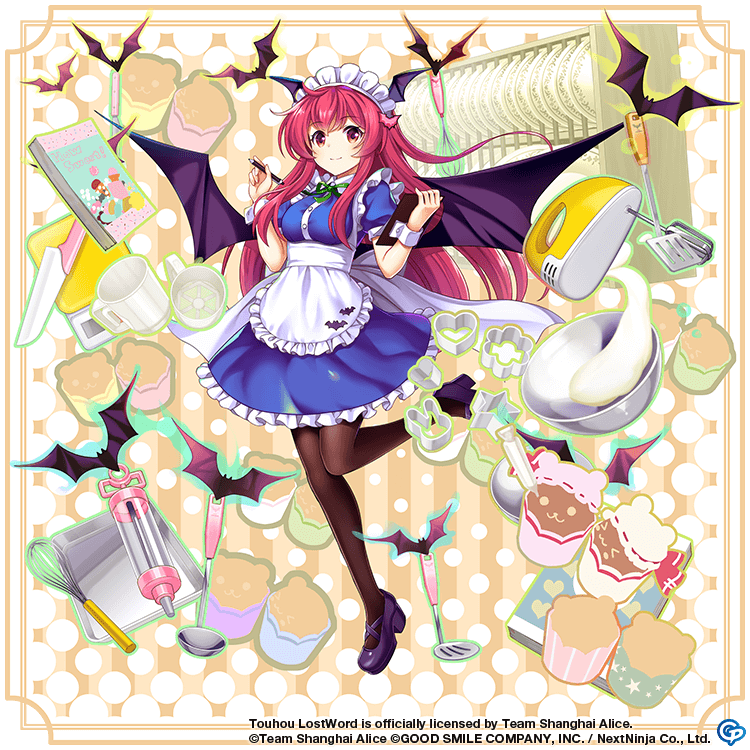 Fragments of the Strange Stars

Compendium of the Sunken Spiral Palace 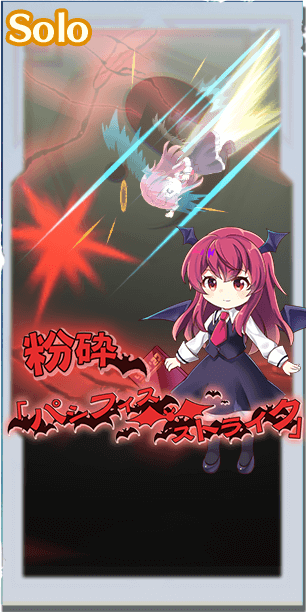 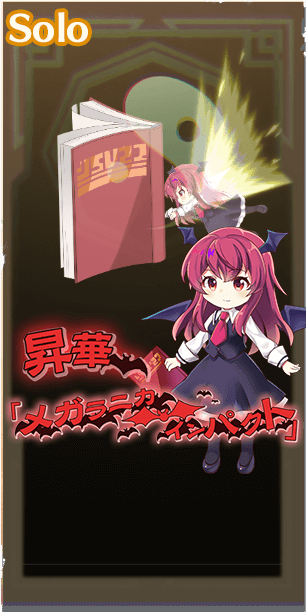 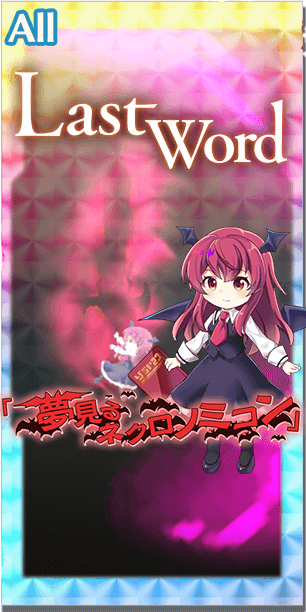 Koakuma is a devil without a name - even the nickname she’s been given by fans (and is by now pseudo-official) means “Little Devil.” Originally a midboss in Embodiment of Scarlet Devil, all she had was a sprite - but in those early days of Touhou mania, with so few characters to go around, people were more than happy to utilize her and become a character. As such, whilst there are a million and one different versions of Koakuma, it’s generally agreed upon that she’s Patchouli’s assistant. LostWord gives her a bit of a playful, almost comedic approach, but she’s not to be underestimated, packing the punch of an A+ Tier Friend.

For farming, Koakuma is reasonably strong, with a potent All targeting Last Word in Dreaming Necronomicon to get the job done, but can run into problems if enemies resist Fire and Moon. She’s better suited to Solo stages too than one might think for an All targeting Last Word, as Demoncraft gives her 3 levels of Yin DEF DOWN against a single starget, which helps her damage output tremendously.

In Harder fights, Koakuma shines. Thanks to the 2-2-1 nature of her Last Word, alongside its remarkably high Slicing, being full Slash (to abuse the Story Card Mysterious Sword Master), and packing Yin DEF DOWN, she can do tremendous damage - on top of providing Yin & CRIT DEF DOWN to support her allies. This is further complemented by Pulverization: Pacifis Strike giving her 2 levels of Agility UP (with a 60% chance for 1 more) for 3 turns, alongside packing an above average 1/2/3 Solo targeting Fire Breaks for 0/1/2 Spirit Power. Sublimation: Magallanica Impact provides an additional 1/2/3 Solo targeting Fire Breaks for 0/1/2 Spirit Power, if more Fire Breaks are needed. Lastly, she’s got handy skills too: Language of Dragons gives her entire party 1 level of Agility UP with a 80% chance for one more for 2 turns (minor, but nice) alongside 1 layer of Blind to all enemies for 2 turns (which is also minor but can be abused by Blind Breakers and herself), and Demoncraft gives one target 3 levels of Yin DEF DOWN for 3 turns to take them out right away, alongside Quick for Koakuma to make sure she can provide further Yin DEF DOWN through her Last Word for her teammates.

Additionally for Breaks, Dreaming Necronomicon packs a extremely impressive 3 Fire and Moon All targeting Breaks for 3 Spirit Power. And unlike other Last Words, it doesn't sacrifice damage in the process, due to providing its own Def DOWN support.

Overall, Koakuma is, in spite of her name and appearance, a very potent friend, especially in Yin or CRIT teams, and will serve anyone well. Sure, she’s Patchouli’s servant on paper, but she’s got enough time to do a few chores for you! Even if she may whine about it.

Due to the 2-2-1 layout of her Last Word, Koakuma always wants at least one source of Spirit Power UP, be it a Story Card or teammate support. After that, she wants Yin ATK UP to maximize her output in combination with Pulverization: Pacifis Strike, with Agility UP being an option if she maximizes her Yin ATK somehow (most likely through teammate support). For fillers, look to Yin ATK & Agility, preferring Yin ATK.

Due to Koakuma’s lack of native accuracy, any Accuracy UP Story Card is her best bet, with Mysterious Sword Master shining due to also providing Slashing DMG UP. Otherwise, Yin ATK UP is her best bet, followed by Fire DMG UP, and lastly Moon DMG UP.

Demoncraft benefits the most from levels, and should thus be maxed out first. After that, Language of Dragons provides a decent bonus, and should be maxed out (though it unfortunately never becomes a 100% chance for another level of Agility). Lastly, Devil of Literary Revival is very weak in the current LostWord meta, and can be saved for when you have no other targets or for when Koakuma gets a Fantasy Rebirth.

Busti's Stall Diary Chapter #504: Our homeland remains eternal
Source Source Source Source Source 1137 posts - 36 participants …
How are you going to use Castoria?
So I was thinking about something regarding castoria. See, if you have/have access to…
Error Code: 99-165
Has anyone experienced/seen this error code before? Specifically in Beni-enma’s…
What does this Announcement mean?
I only Lvl Servants to 70-80 and leave their skills at 1/1/1 since i have been using…
Append Mats
Why are there recent lostbelt mats in old servants? Like at least they should’ve…
Read More