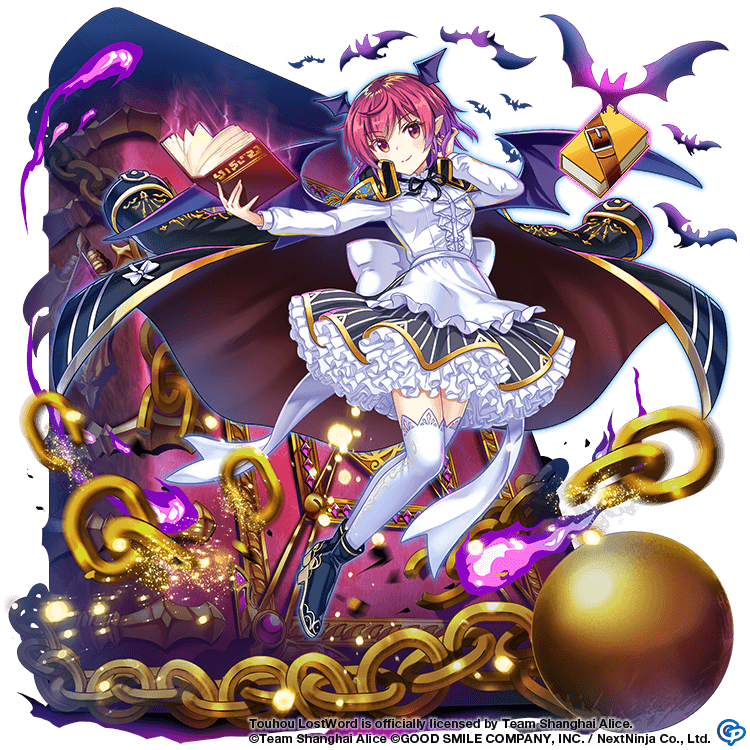 The Spread Shot of Koakuma with the twisted fate (a Touhou LW original). She attacks with her white raven familiars. People say that white ravens don't exist, but here they are! Quod erat demonstrandum!
Cat Box

The Focus Shot of Koakuma with the twisted fate (a Touhou LW original). An attack that uses cat familiars inside a box. You cannot know the state of what's inside the box until you peek inside. Observation determines the state of a superposition... But is this true? Can't you vaguely see the sleeping cats through the box? 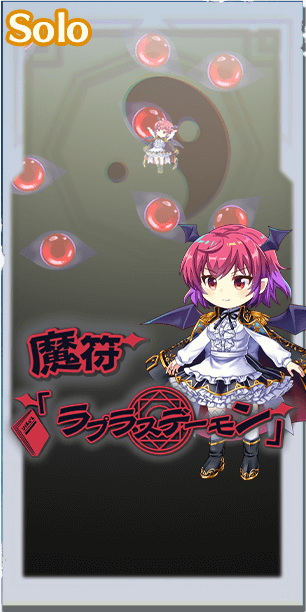 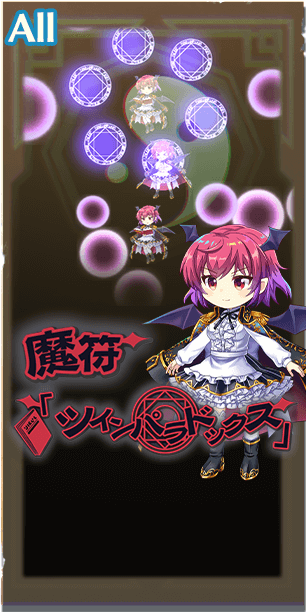 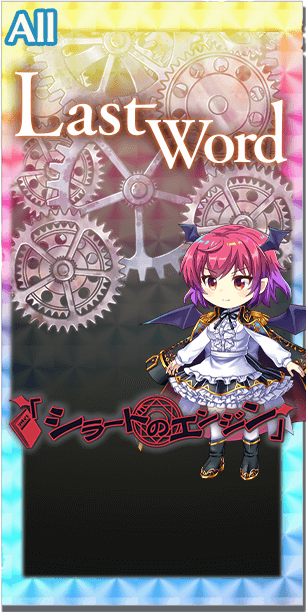 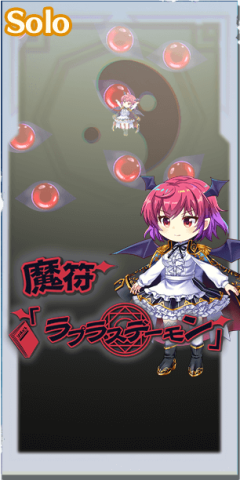 A Spell Card of Koakuma with the twisted fate (a Touhou LW original). In this attack, she controls time and space. People may think that time and space are two separate things.
But if you can grasp the positions and momentums of a given moment, you can determine the past and the future. It is exactly the same with right and left, up and down, or forward and backward.
*Pre- and Post- effects assume max level. Effects per level can be viewed here.
Pre-Attack Spell Card Effects 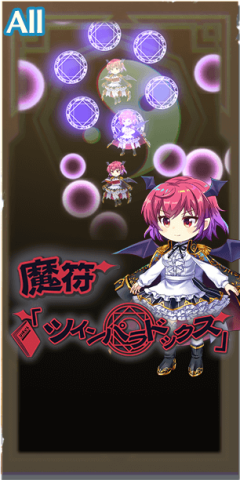 A Spell Card of Koakuma with the twisted fate (a Touhou LW original). This attack causes a discrepancy in the age of two twins. Once you learn about time dilation, the next thing you'll have to try to wrap your head around is the twin paradox. You mustn't attempt space travel without first considering the consequences. There have been examples of people summoning multiple copies of themselves by transcending the boundaries of time. So perhaps this Spell Card is incredibly appropriate for a servant of the Scarlet Devil Mansion.
*Pre- and Post- effects assume max level. Effects per level can be viewed here.
Pre-Attack Spell Card Effects 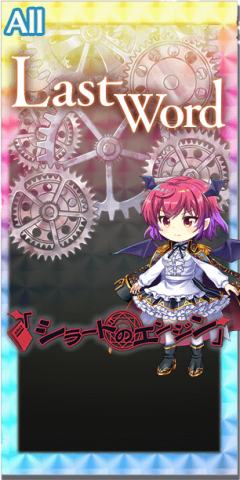 The Last Word of Koakuma with the twisted fate (a Touhou LW original). A forbidden attack that turns information into magic. Information or knowledge is a collection of symbols arranged in an orderly and meaningful manner. It is possible to find meaning in these arrangements because magical power resides within them. This means that if you lose your memory, you can retrieve this magical power... Wait. That might be important.
*Pre- and Post- effects assume max level. Effects per level can be viewed here.
Pre-Attack Spell Card Effects

Immune to Barrier Status: Burn and Freeze. When attacked with Burn or Freeze, recovers 5% of own HP.
When using Graze, party's Yin DEF 1 level UP (1 turn).
DMG from resisted elements 30% DOWN.

Universe E1 Koakuma, The Compendium of Advanced Magic, is much like Koakuma in more familiar universes; she is Patchouli's devil familiar who tends to the library of the Scarlet Devil Mansion, as well as assisting Patchouli or any of the other members of the SDM with whatever they may need. However, unlike the normal SDM, Remilia and Flandre have a strangely different dynamic between them, Sakuya is nowhere to be found, and the air seethes with unease and danger. Nevertheless, Koakuma has come to love the SDM's residents like her own family, past the title of a mere familiar. The cute butler of the Scarlet Devil Mansion will try her hardest to protect them in this uncertain world as an EX Tier Friend.

As the butler of the E1 universe, Koakuma can provide not only utility that could support any character, but also powerful barrier breaks as well as nuking powers augmented by her wide range of killers.

Having Gensokyo and Youkai Killers mean that she guarantees critical hits to the majority of the cast in the game, allowing her damage potential to be naturally high. Another factor that affects her damage potential are her Hard and Slicing bullet scalings. As an Ultra Festival Friend, it is expected for her stats to be on the high spectrum and these can further be improved through the use of stat sticks. Having been said that, she does lack an innate CRIT ATK source to take advantage of her Killers plus she lacks accuracy buffs which can impede with the consistency of her damage potential. Hence, she will need to rely on external sources for these effects, which in turn will allow her to excel more.

In the perspective of barrier breaks, E1 Koakuma puts an emphasis on her wide range of Metal and Moon elements. This is ever-present in all of her attacks and becomes more apparent in her Spell Cards, with Metal being the most as her Last Word only consists of it. Her shots offer a good amount of these elements and have a decent enough accuracy to be used as elemental breaking attacks.

Her 1st spell card, Magic Sign: Laplace’s Demon, starts with Metal breaks on the first 3 lines and Moon breaks on the latter, which are complemented with Incineration (Burn break), Melting (Freeze break), and Toxic (Poison break). These anomaly breaks can be very useful if dealing with an enemy that is neither weak to Metal nor Moon elements as 4 of the target’s barriers will be guaranteed to break, provided that the target is not immune to the Burn anomaly, which her Pre-ATK effect inflicts.

Her 2nd spell card, Magic Sign: Twin Paradox, also presents the same elements, however this time they are placed in an alternate manner, not to mention that she also inflicts Freeze anomalies to all her targets, which allows party members with Melting break the enemies’ barrier with ease.

Finally her Last Word, Szilard’s Engine, only consists of the Metal element, with Incineration and Melting at the latter part of the spell card to further supplement the breaks that she can achieve.

Now comes her use when it comes to utility. She is able to consistently supply her party with YIN ATK and YANG ATK buffs using her skill 2, Magic Supply. At max level, this will allow the cooldown of the skill to be reduced to 3 turns, which is parallel to the effects' duration. Her 3rd skill, Dealing Blaze, enables her to dispel 1 of the party’s lock, the same effect as B3 Toyohime. She can also just do it to herself when she uses her 1st spell card, Magic Sign: Laplace’s Demon, as it is the Post-ATK effect of that spell card. Finally, as a Healer unit, we should not forget that she heals the party’s HP and recovers their barriers + barrier status using her 1st skill, Evil Healing.

With the current factors considered, E1 Koakuma cannot prove her dormant potential until a Metal-centric challenge content comes by as she has a natural bias towards the aforementioned element. Make no mistake however, as this does not mean that her worth is reliant towards it. The cute butler will continue to offer high amounts of barrier breaks, not to mention that she possesses an innate capability to dish out high damage and utility despite her flaws.

Using Underworld Party Night on her 1st spell card allows her to supplement her lack of CRIT ATK related buffs by debuffing the enemy's CRIT DEF, plus it also provides YIN support in the form of YIN DEF DOWN to further improve her damage against the target.

You can use Standing Behind You as a story card for her 2nd spell card as it provides buffs to the Moon element as well as CRIT ATK UP support to improve her damage. In the case where she is set-up to already have maximum CRIT ATK support, you may use Heat of My Fingertips instead for nuking purposes.

If she is unable to acquire accuracy buffs from her team, using any accuracy card that gives at least 2 ACC UP is sufficient. However, it is recommended to use a MLB copy of Dark Mastermind? as not only does it provide the buff she needs but it also serves as a stat stick to improve her damage later on due to Hard scaling. If you want to be fancy, you can use Ability Cards? for that party ACC UP if needed.

Some other mentions include the usage of Witch of Scarlet Dreams instead of Dark Mastermind? if you feel that she does not require further accuracy boosts and would rather focus on giving her more power to access the latter lines. Puppeteer and Necromancer comes in as an alternative story card for her 1st spell card as it provides a 50% damage boost due to that particular spell card only having the Light Bullet type. Lastly, if you have Solo Act, you may also use it as she is able to use the effects of it.

As her Last Word consists of the Heavy Bullet type, The Secret God of the Sky, will be her default best in slot currently as not only does it provide her with 50% Heavy Bullet UP but it also provides 2 CRIT ATK UP which is heavily beneficial for her due to her lack of innate CRIT ATK UP sources. An alternative story card to use would be Underworld Party Night for its YIN ATK UP and CRIT DEF DOWN support.

Focus on raising her 2nd skill, Magic Supply as it allows her to constantly provide your party with YIN ATK UP and YANG ATK UP buffs at max level. Next up will be her 3rd skill, Dealing Blaze, as despite its dispel lock effect not increasing in value, it allows her to do more Burn anomaly inflicts and give 1.25P to herself, which is generally better. Last but not the least, would be her 1st skill, Evil Healing, for its healer based effects.

+ Great access towards anomaly inflict and breaks, emphasizing on Burn in particular.

+ Utility is high end based on what her spell cards and skill can offer.

+ One of the best Spirit P supporters for longer fights.

- Lack of accuracy may mess up with her damage consistency.