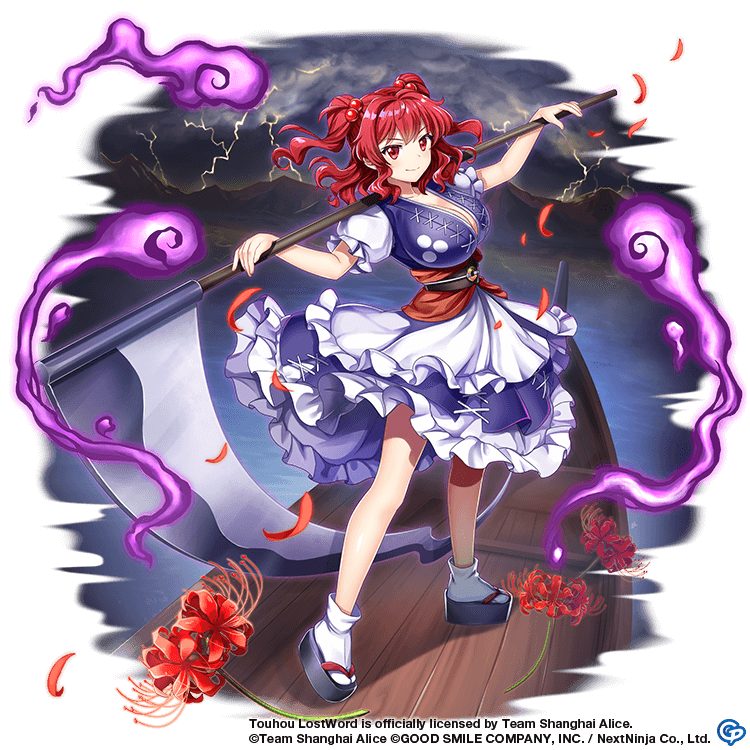 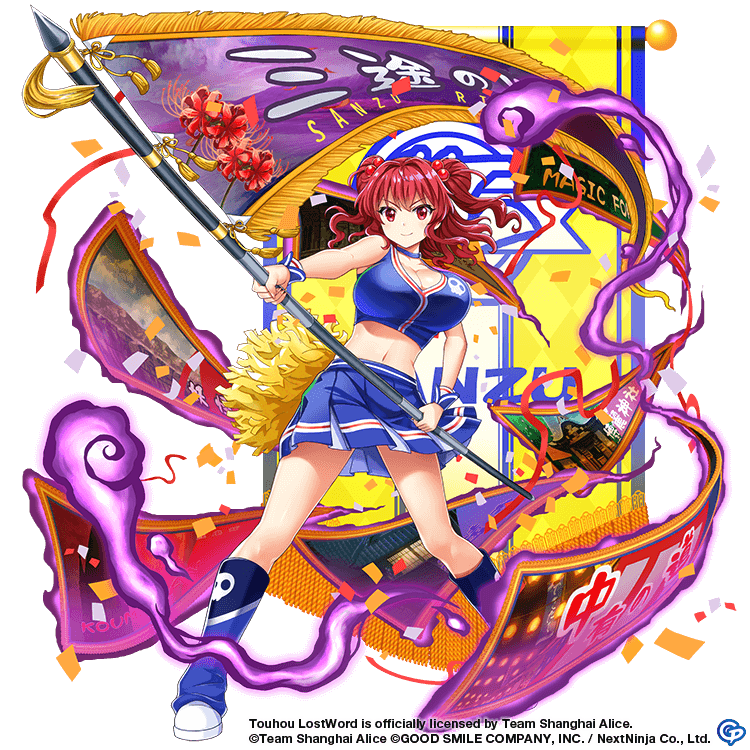 Tip of the Shinigami

Komachi Onozuka's Spread Shot. A Shot that unleashes coin bullets that spread around the battlefield. The Sanzu River has a fare of 6 mon coins (an obsolete currency) required for the dead to cross it. In truth, it isn't a crossing fare―it is an offering in the name of Ksitigarbha (a guardian of children known for his vow to take responsibility for the instruction of all beings in the six worlds). In recent times, the dead have been sent across with paper money as a substitute.
Ties With the Deceased

Komachi Onozuka's Focus Shot. A Shot that attacks her target from all directions. Coins were originally buried with the dead as a burial accessory. In modern times, substitutes have been used because of recent laws and the logistics of cremation. This has resulted in it becoming more common for the dead to cross over without any money. Shinigami probably hear out the sorrows of those in such a situation. 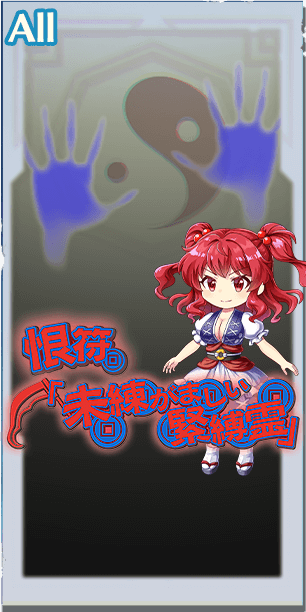 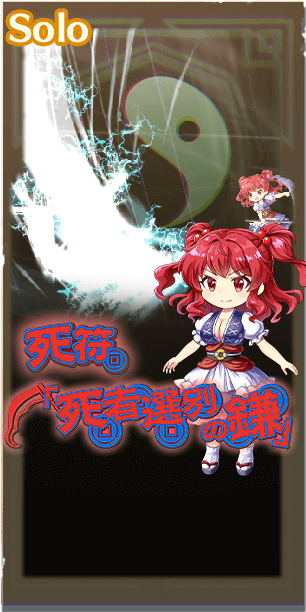 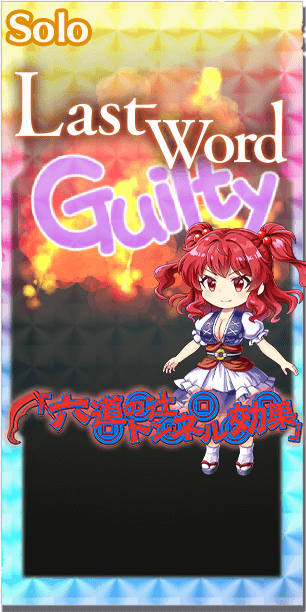 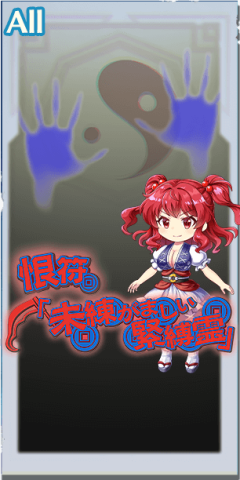 Komachi Onozuka's Spell Card. She calls upon evil spirits to hound her opponents. Where these spirits come from is unknown, but they may be related to the sinners bound in Hell. (Does she have the authority to do this?) These evil spirits do not have any desires of their own to attack, but the effect remains the same... considerable damage to both the opponent's spirit and mind are inevitable.
*Pre- and Post- effects assume max level. Effects per level can be viewed here.
Pre-Attack Spell Card Effects
None
Post-Attack Spell Card Effects 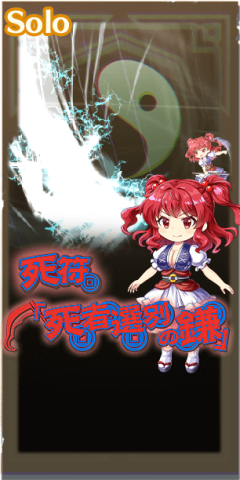 Komachi Onozuka's Spell Card. She wields her scythe and unleashes a powerful pulse wave to strike her enemy. This attack is very much in line with shinigami, but Komachi is a shinigami in charge of ferrying souls, not reaping them. She does not go after the souls of those whose time has come... or so she says. But judging by the grace with which she wields her scythe (whose original purpose was to give the dead a performance worthy of joy), it is unclear if what she says is true.
*Pre- and Post- effects assume max level. Effects per level can be viewed here.
Pre-Attack Spell Card Effects 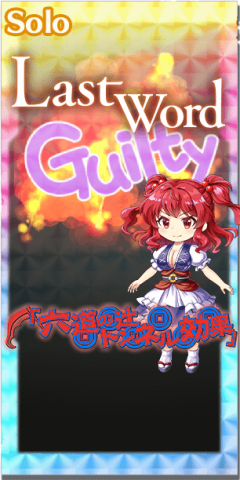 Komachi Onozuka's Last Word (A Touhou LW original). A noble of an imperial court used a well in a temple connected to the Underworld to travel between Hell and the world of the living at night. He did this to act as the advisor to the judge of the afterlife called the Yama. This story is chronicled in a cultural work called ''Yata Jizou Engi.''
*Pre- and Post- effects assume max level. Effects per level can be viewed here.
Pre-Attack Spell Card Effects
None
Post-Attack Spell Card Effects

Immune to Barrier Status: Blind.
When using Boost, own Accuracy 1 level UP (1 turn).

Komachi Onozuka was released on December 17th, 2021 in Cheering Squad.

As a shinigami, Komachi Onozuka carries the great responsibility of ferrying the souls of those who have passed away over the Sanzu River to be carried into the afterlife and judged by the Yama Eiki Shiki. Even though it is a very important job, Komachi is more known as a slacker who avoids her work whenever possible. Her ferry is the only vessel possible to cross the Sanzu River, meaning that ghosts will be left harming the balance of Gensokyo, an incident which has already occurred once flowers began blossoming out of season thanks to the wandering spirits. While her boss ends up lecturing Komachi when caught slacking, the shinigami herself is more friendly when speaking, even if her conversation topics heavily lean toward death and the afterlife. Her friendly nature and abilities as a shinigami makes her a E-Tier Friend within Touhou LostWord.

Komachi’s farming capabilities are rather mediocre. Her Last Word, Samsara Tunneling, is a Solo-target Yin-only attack that scales based on her own Agility. While there are some parts of her kit that are able to increase her Agility, such as the 3 levels UP from Death Sign: Scythe of Final Judgment and 3 more levels UP from Skill 2, Distance Control, these buffs do little to assist the final damage output compared to the scaling of other Last Words. Having a 1-3-1 spread makes it so the attack isn’t entirely back-loaded, but the 2 Yin ATK UP buff is applied only after the Last Word is used, meaning farming will almost always take more than one turn with her.

Komachi offers some more utility when considering her in more challenging content. Her third skill, Shinigami Eye, stands out in giving 3 levels of Yin ATK UP and Accuracy UP to herself. Accuracy UP means less story cards need to be used in favor of more Yin ATK boosts or other benefits. Additionally, her first spell card, Malice Sign: Regretful Bound Spirits, provides 3 Water breaks in total at 2 Spirit Power against all opponents.

Unfortunately, the elemental breaks of her other attacks are rather below average, with Death Sign: Scythe of Final Judgment having only 2 Metal breaks at only 2 or 3 Spirit Power. Having an All-target spread shot with 1 Metal break at 1 Spirit Power is alright, but is nowhere near as helpful or spammable as a 0 Spirit Power elemental shot. The rest of her kit is nothing impressive, and the 2 levels of Agility DOWN from Malice Sign: Regretful Bound Spirits is a rather niche debuff.

Still, Komachi’s Solo-nuking potential with her Last Word is definitely nothing to underestimate, even if it is unfortunate that her Yin ATK buff is granted after the attack itself. Take her along for a difficult battle, and she should at least be a motivational person to speak to.

The Slice values for Komachi’s spell cards are as follows:

More Spirit Power is required for the most optimal nuking capability from Komachi’s Last Word. Other than that, Accuracy is less of an issue due to Shinigami Eye, so Yin ATK buffs to add onto the 5 levels of Yin ATK UP Komachi already grants herself or Yin ATK stat sticks will benefit Komachi’s damage the most.

Since every bullet of Komachi’s Last Word is classified as a Body bullet, the 45% increase in Body bullet’s power provided by Eating Contest synergizes with Komachi rather well. Any additional levels to Yin ATK serve as a functional replacement if Eating Contest is unobtained.

Shinigami Eye has immediate priority over Komachi’s other skills, due to both increasing Accuracy and Yin ATK by 3 levels upon max level. Otherwise, the 3 levels of Agility from Distance Control serve as a small boost to her Last Word’s damage output. Spirit’s Calling definitely stands out the least out of the three, providing no significant support to herself or the party.