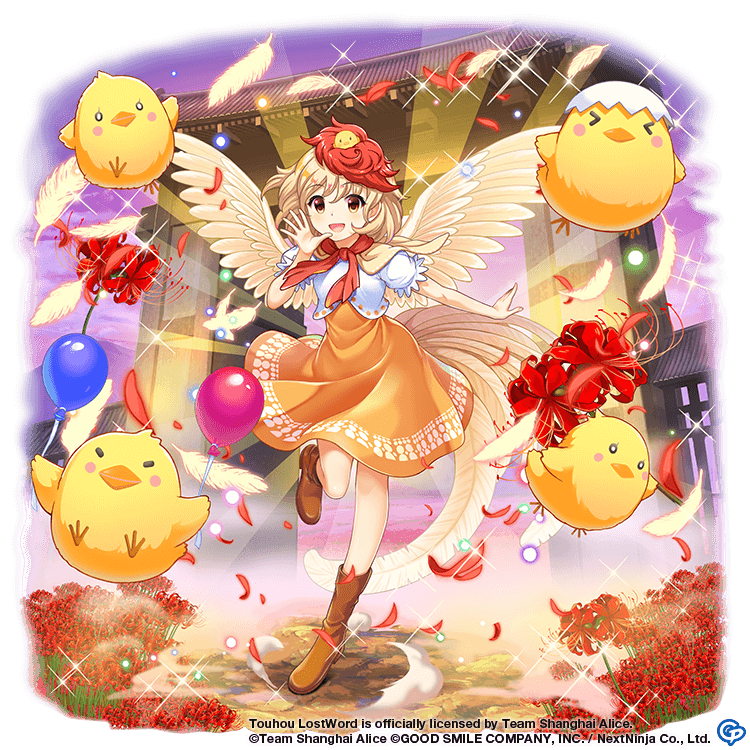 Kutaka Niwatari's Spread Shot (a Touhou LW original). She attacks by powerfully delivering goods. The name for the god of chickens, Niwatarijin, is sometimes written with the kanji characters ''niwa'' and ''tashi'' that collectively mean ''delivery of goods.'' There are various theories as to why this is the case. Still, it probably has something to do with how Niwatarijin is conflated with the god, Mikumari, and their connections with the distribution of water and crossing rivers.
Miwatari

Kutaka Niwatari's Focus Shot (a Touhou LW original). Chicks make a spectacular charge in this attack. The name for the god of chickens, Niwatarijin, is sometimes written with the kanji characters ''mi,'' ''wa,'' and ''tari'' that collectively mean ''three-wheeled legs.'' There are various theories as to why this is the case. Perhaps it is linked to Niwatarijin's strong connection with water and the god's power over flood prevention, irrigation, and crossing the sea. 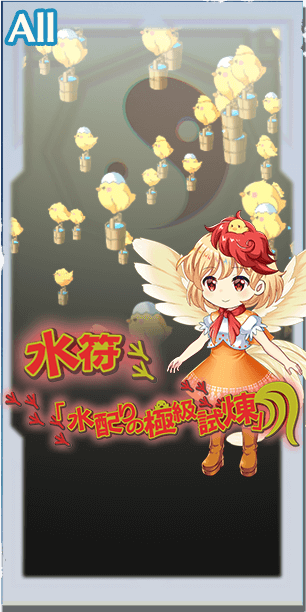 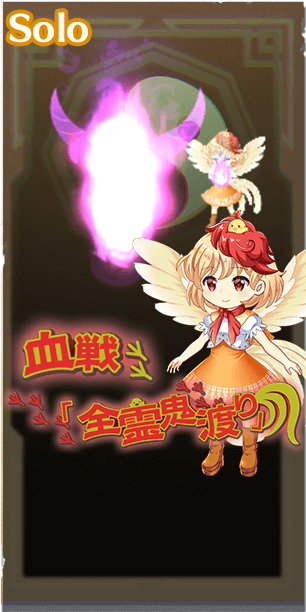 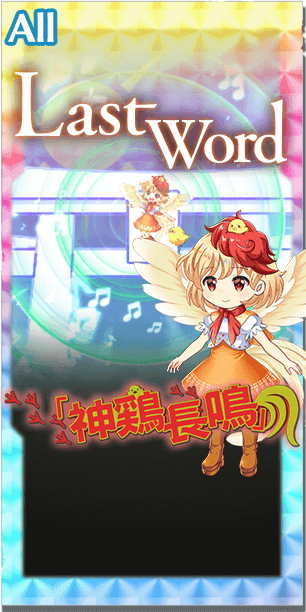 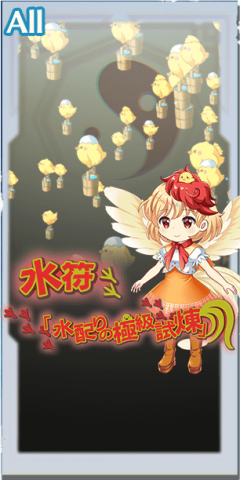 Kutaka Niwatari's Spell Card. Chicks distribute water in this attack. There is a theory that Niwatorijin and the god Mikumari are one and the same. Mikumari means ''water distribution,'' so it is believed that this god manages irrigation―the distribution of water for agriculture. The distribution of water was probably treated as a divine ritual because it is so vital to the everyday lives of rural communities.
*Pre- and Post- effects assume max level. Effects per level can be viewed here.
Pre-Attack Spell Card Effects
None
Post-Attack Spell Card Effects 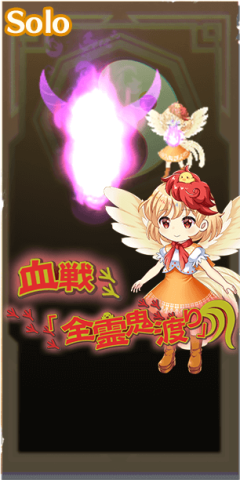 Kutaka Niwatari's Spell Card. In this attack, she makes her opponent take her final spiritual trial. It is said that Niwatarijin was first called Oniwatari because adding the ''o'' prefix to a name shows respect. However, Oniwatari was then later written with the kanji characters for ''oni'' and ''passage or deliver.'' It is also theorized that the name is written this way due to the exploits of a certain general who vanquished oni. 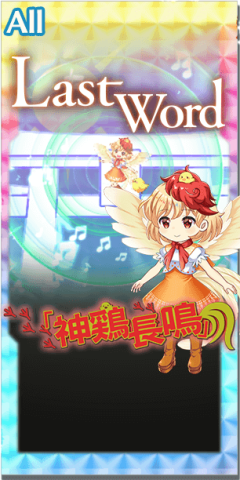 Kutaka Niwatari's Last Word (a Touhou LW original). She attacks with a long crowing at the break of dawn. The god of chickens, Niwatarijin, is not mentioned in the ancient chronicles of Japanese mythology, but they do describe the chicken as a sacred animal. The Yaoyorozu no Kami tried to use the cawing of a chicken to call Amaterasu out of the Ama no Iwato (Cave of Heaven), where she had secluded herself. That chicken was called Tokoyo no Naganakidori (bird with an eternally long crow). This attack is a ritual of the rising sun, and the chicken is a sacred bird that announces the time.
*Pre- and Post- effects assume max level. Effects per level can be viewed here.
Pre-Attack Spell Card Effects

Kutaka Niwatari was released on June 10th, 2022 in Festival: Gods of Clay & Chickens.

Kutaka Niwatari is the one of the lesser of the eight million gods, being a god of chickens, and works in Hell as a subordinate to Shiki Eiki, Yamaxanadu. Her memory is pretty poor, and she sometimes forgets her orders (likely due to being part bird in some way), but she still carries out her duties to the Yama faithfully. Her ability, “to cure throat illnesses”, is a perfect match for the Yama, and she spends most of the day talking as a part of her judge duties, so Kutaka can heal her throat when it runs dry or sore. This birdbrain is an A-Tier Friend.

Kutaka joins us in Lost Word as a Recovery type Friend, which are rare as things currently stand. She’s nothing crazy, and not exactly on the levels of B3 Toyohime or anything, but she’s still a solid healer with party wide healing, barrier restore and barrier cleanse throughout not only all of her Skills but also her Spell Cards. She also has a decent amount of party wide Speed UP support, allowing for her to be slotted into Speed type teams as a tank with some synergistic benefits, not to mention Kutaka has a good bit of Slice scaling herself, upping the damage of her own Spell Cards.

Starting with her Spread Shot, Delivery, it’s really pretty solid. Has some Water, Wood and Sun, self Dodge UP allows her to dodge-tank a little in tandem with her healing, and it even has a little Slice. Her Focus Shot, Three-Wheeled Foot, has Wood at 0P, is sure-hit, and also has a chance for some Speed UP, synergizing with her Slice scaling throughout her kit. Then, just like the Spread Shot, there’s some Sun and Water elsewhere in the bullet lines.

As mentioned in the previous section, Kutaka’s Spell Cards are pretty straightforward and what you’d expect from a Recovery class Friend: lots of pre and post-effect healing and barrier restore with some Dodge and Speed UP sprinkled in there too. Her first Spell Card, Water Sign: “Water Sharing (Ultimate Tribulation of Mikumari)”, is AoE, with Pre-Attack effects of party wide Heal 30% and increase Barrier by 1. Its elements are 2 Water and 2 Wood, and it has a good bit of Self Dodge UP, playing off of her Focus Shot’s same ability. Her second Spell Card, Bloody Battle: “Oni Passage Highly Spirited Oniwatari”, is ST, with 3 Water and 3 Wood for elements, and its Pre-Atk effect is target Dodge 2 levels DOWN (2T), which is a little strange, but it’s technically team support, so it’s not useless or anything, so long as your party capitalizes on it. The interesting part is how it has Melting at 3P, allowing for Kutaka to synergize with a whole set of Friends in those who apply Freeze barrier anomaly to enemies. And her Last Word, Divine Cock-A-Doodle Do, has 4 Sun, 1 Water and 1 Wood for elements, Pre-Attack effect of party wide Speed 3 levels UP (3T), Post-Attack effect of party wide 75% Heal, a bunch of Slice (present on 4/6 bullet lines), and more Melting, but this time at 2P. Don’t expect insane damage out of her Spell Cards or anything, but they might hit surprisingly high numbers if you’re running a speed-based team that gives out a lot of boosts just like she does, due to the Slice.

Kutaka’s personal ability makes her immune to Burn, Freeze and Poison, which is certainly welcome in her role as a healer. As for her Skills, they are just about as straightforward as you could imagine for a Recovery type Friend. Skill 1, "Please Move!", has party wide 35% Heal and Speed 2 levels UP (2T). Skill 2, "Don't Run On Stairs!", has party wide 45% Heal and 1.5 Barrier cleanse. Skill 3, "The Line Ends Here", has party wide 1.5 Barrier restore and self Yang ATK 2 levels UP (2T). There’s a little bit of Speed and Yang ATK mixed in there, but for the most part, it’s Heal, Barrier and more Heal, which is pretty much what you’d expect. Not that that’s a bad thing.

Kutaka is a healer through and through, but with the spice of being a bit nice for Speed-based teams as well. While it’s not necessary to run her in them, it’s a nice option that has a little bit more synergy with her kit than just outright healing. Otherwise, she will get the job done for healing, making her a solid choice for when you might happen to need one.

The secondary effects and Slice scaling for Kutaka's attacks are as follows:

Myouren Temple Anniversary is an incredible support card, giving the whole team Spirit P UP 0.75, which is otherwise unprecendented for a Story Card. Witch of Scarlet Dreams is also a great card for Kutaka, giving her lots more Spirit P UP than Myouren Temple Anniversary (but only to herself), and also giving her good Yang ATK and Speed buffs. Undercover Reporter is another budget option; it doesn't give Spirit P UP, but has good Yang ATK and Speed filler, like Witch of Scarlet Dreams.

Myouren Temple Anniversary is still an incredible support card, giving the whole team Spirit P UP 0.75, and also happens to be Kutaka's current highest damage card for her Last Word. Unknown Barrier Team is a farmable card, and also high damage for Kutaka's Last Word, so it's a good compromise if you don't have Myouren Temple Anniversary. Alternatively, you could use Worlds in Hand for crit support if you want. Any other party supporting Story Cards will gimp Kutaka's Last Word damage significantly, but could still be considered if all you care about is her element breaks and team buffs.

Assuming you're intending to use Kutaka for her intended role of healer, start with her Skill 2 as it does both healing and Barrier restore. Then do Skill 1, as it has a low cooldown and still does healing, then Skill 3 last. If you intend to use her more for her Speed support, you should do Skill 1 first.