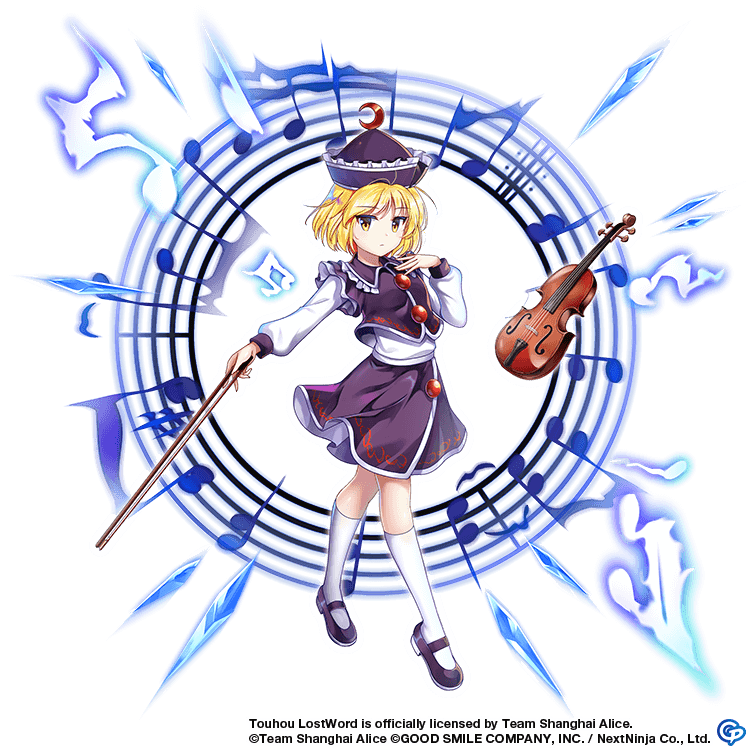 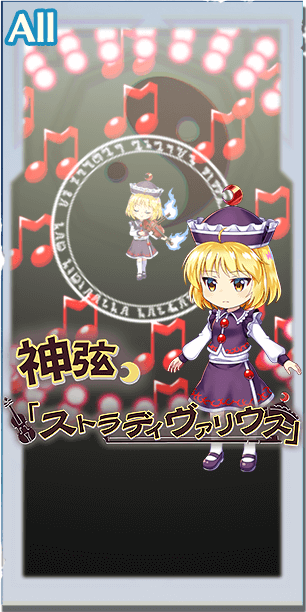 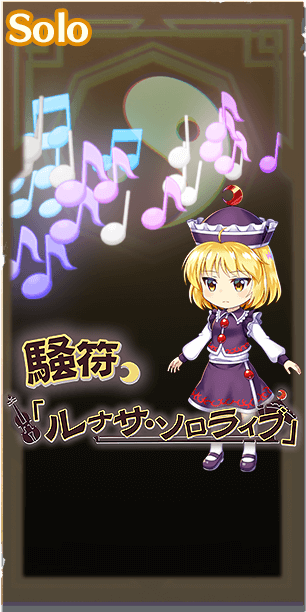 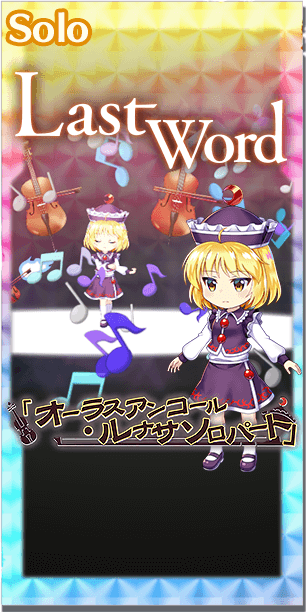 Immune to Barrier Status: Blind.
DMG to effective elements 25% UP.

Lunasa Prismriver is the oldest sister of the three Prismriver sisters as she performs along with her younger siblings in the Prismriver Ensemble. She is capable of playing her violin without the need to utilize her own limbs while remaining more reserved than her other sisters. Her darker attire may imply a more melancholic mood to some, but that might be coming from Lunasa's notes being able to touch the spirits of anyone listening to her music. Fortunately outside of solo performances, her music is usually safe enjoy for anyone to enjoy, allowing Lunasa to use her musical ability to serve as a Heal unit in Touhou LostWord. When considering everything she can play, Lunasa ends her performance with a ranking of a B-tier Friend.

Lunasa has a good amount of skills to contribute towards an average farming capability. She is actually able to increase her own Spirit Power by 1.0 from her first spell card, Divine Strings: Stradivarius, which can contribute toward other Elemental breaks or her Solo-target Last Word, Final Encore - Lunasa Solo. Her second skill, New Single Release, also increases her own Yin ATK and Accuracy by 2 levels, which will both assist her Last Word's damage output, along with the 2 levels of Yin ATK UP pre-attack effect of her Last Word. Being backloaded with a 1-1-3 spread means her Last Word is not the most ideal, but Lunasa at least has the tools to make it work and has rather decent Slicing scaling to boot.

With her primary role being a Heal unit, Lunasa's other skills focus on supporting her party. Her first skill, Ambient Melody, and her third skill, Relaxing Timbre, recover 35% and 50% of Lunasa's own HP to the rest of the party. Relaxing Timbre can additionally restore one layer of her team's Barrier Status, potentially assisting in anomaly-centric battles. Otherwise, Lunasa can indirectly support other Friends by decreasing a single target's Yin and Yang ATK by 2 levels from her second spell card, Noise Sign: Lunasa Solo Live. This offensive debuff can stall for time when necessary or help a defensive friend survive even longer.

Unfortunately, Lunasa cannot provide any greater support outside of what was mentioned above. Without any source of Barrier Restoration especially, only Lunasa's above-average healing stands out overall. A P0 Water break on her Focus shot can come in handy when Water spam is needed, but otherwise Lunasa's Elemental breaks are very Spirit Power hungry and only average.

Still, Lunasa stands out from other standard Friends with being able to set up her Solo-nuke by herself and, at the very least, granting multiple heals to her allies. Keep her around, and her violin's melancholic notes should prove to be greater than a simple sideshow.

The scaling of her Last Word is as follows:

Since Lunasa is reliant on Spirit Power for both Breaks and damage, even though Divine Strings: Stradivarius already provides her with some Spirit Power, additional sources of it are always good to have be it in the Arena or the Tower. Otherwise, Yin ATK UP helps with her sore lack of it, and Agility UP is a decent option with her decent Agility and abundance of Slicing on her Last Word, and lastly Yang DEF UP is also a option due to the high amount of Hard, if somewhat let down by her low DEF base. For stat sticks, her priority is Yin ATK>Yin DEF>Agiltiy

Energy Power UP is Lunasa's best bet due to already having Accuracy and Yin ATK UP, with Thunder Beat being her very best option. Otherwise, Yin ATK UP will suffice.

If you're looking to maximize damage, first level up New Single Release, due to the considerable improvements it offers to Lunasa's damage. Otherwise, level up Relaxing Timbre and Ambient Melody both to 5, due to the massive gains they get for healing ability relative to the time it takes, then focus on Relaxing Timbre first.

+Backloaded Solo nuke with reasonably solid potential damage
+P0 access to Water on a Basic Shot
+Can gain some quick Spirit Power UP from her Spell Card Divine Strings: Stradivarius for quicker Breaks

-Damage is mostly backloaded
-Mixed damage is hard to scale and support
-Entirely lacking in offensive support
-Incapable of restoring Barriers, leaving her inferior to other Healers