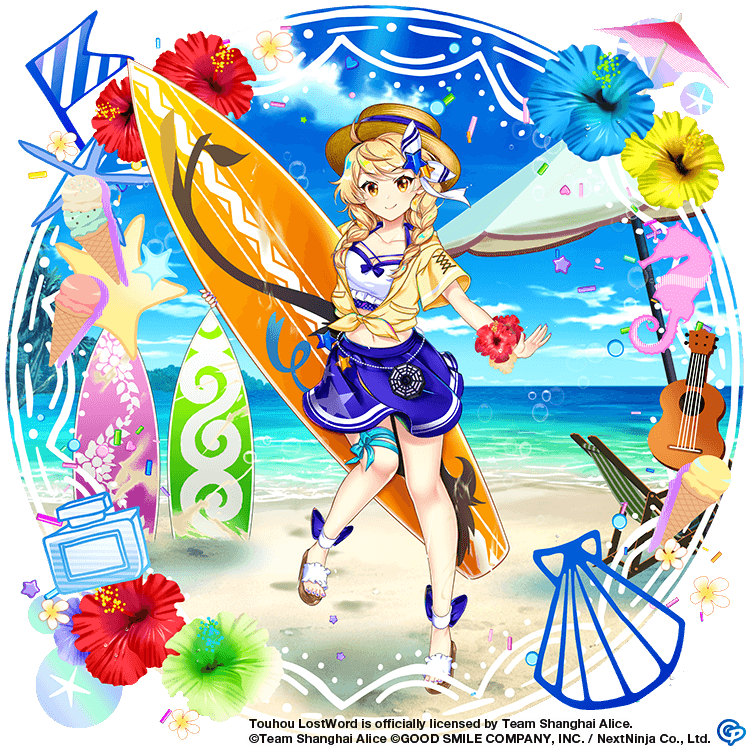 The Spread Shot of Marisa Kirisame from the world delirious with eternal summer (a Touhou LW original). She attacks with star-shaped sand. If this world's history was the same as our world's, this attack would probably be called ''Ground Stardust.'' This small jar filled with colorful star sand is one of Marisa's favorite items... even though she throws it at people. Apparently, Beach House Kourindou sells them as souvenirs. They are one of the few decent items that can be purchased there. Marisa did purchase them, didn't she...?
Flow Spark

The Focus Shot of Marisa Kirisame from the world delirious with eternal summer (a Touhou LW original). She attacks by shooting water out of her mini hakkero. If this world's history was the same as our world's, this attack would probably be called ''Narrow Spark.'' The development of this attack was a complicated process, as Marisa first had to narrow the beam of her Master Spark (though it is still quite wide for a laser) and then replace the light with water. The kappa and karakasa-obake really liked it when she tried shooting out water on a whim, so she hasn't looked back since. Making people happy feels kind of nice. 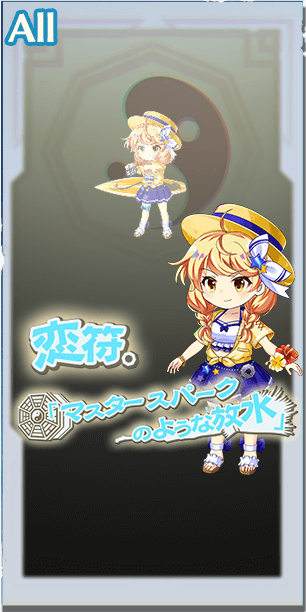 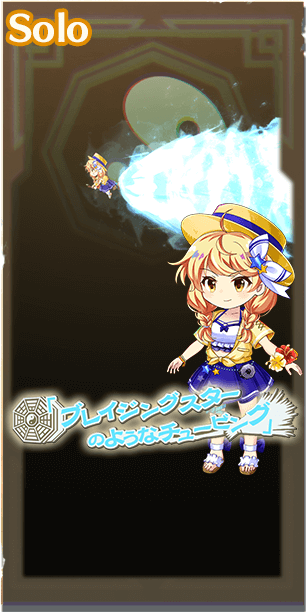 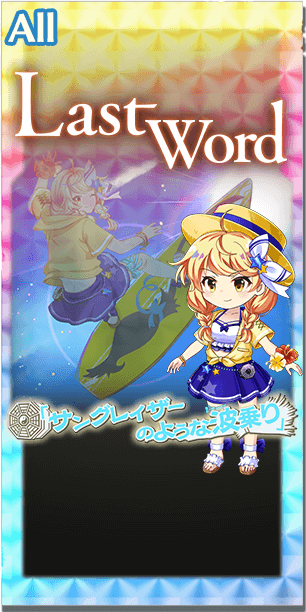 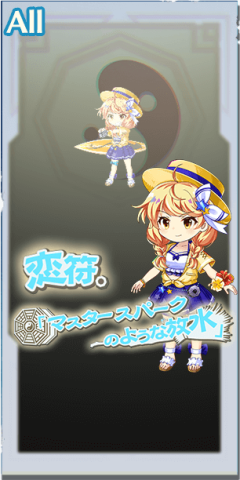 A Spell Card of Marisa Kirisame from the world delirious with eternal summer (a Touhou LW original). As the name implies, she shoots out a torrent of water, similar to how she shoots her Master Spark. In the Eight Trigrams, each trigram is composed of three lines. Each of these lines can either be broken, which denotes yin, or unbroken, which denotes yang. There are eight different combinations of these lines―Thus, Eight Trigrams.

The trigrams on Marisa's mini hakkero can be arranged into two distinct patterns―Later Heaven and Earlier Heaven. It isn't exactly known how she switches between these two patterns, but perhaps she can freely switch the individual trigram panels around. That is how the Marisa of this world does it. The Eight Trigrams describe the workings of the entire universe, so it shouldn't be that difficult to do something simple like shoot water out of a mini hakkero by changing the trigram panels around.
*Pre- and Post- effects assume max level. Effects per level can be viewed here.
Pre-Attack Spell Card Effects 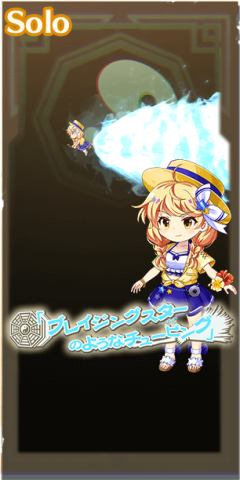 A Spell Card of Marisa Kirisame from the world delirious with eternal summer (a Touhou LW original). She expels water from her broom to fly into her target. The Spell Card is named ''Blazing Starish Tubing,'' but it seems that Marisa acts as the boat pulling the tube. White-water rafting was all the rage for a time in Gensokyo, so perhaps Marisa used her experience back then to develop this attack. She can also enjoy hovering above the water if she aims the broom straight up at the sky. Apparently, the vast majority of her tubing customers are fairies.
*Pre- and Post- effects assume max level. Effects per level can be viewed here.
Pre-Attack Spell Card Effects 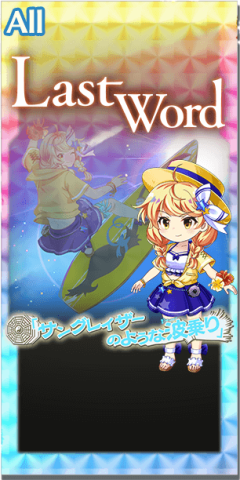 The Last Word of Marisa Kirisame from the world delirious with eternal summer (a Touhou LW original). She attacks by surfing. Marisa is totally hooked on this sport at the moment. Marisa is known for being crazy about firepower while hiding a surprising level of composure and keen intelligence, but in this Gensokyo of eternal summer, she is also crazy about surfing. It's all she thinks about. It's like she's head over heels in love with the ocean. This is because the waves wash everything away, along with all your troubles and doubts.
*Pre- and Post- effects assume max level. Effects per level can be viewed here.
Pre-Attack Spell Card Effects

Marisa Kirisame (C3) was released on November 18, 2022 in Epic Prayer “Magician on Vacation”.

Riding on a big wave comes Gensokyo’s most radical Magician! Exchanging her broom for a board (or is the board a broom?), this variant of Marisa is down to party all day among the waters of this drowned Gensokyo. Unlike her other selves, this Friend is happy to don the mantle of a Support-class, providing the Shrine Maiden of Paradise and anyone else in her party with enough firepower to make a ruckus on her behalf.

Drawing on the immense pool of Spirit P gain she can generate, Marisa can turn to more offensive options in her arsenal to balance out her lack of damage. Resort Stars and Frozen Over Gensokyo both work extremely well in this regard, with her first two Spell Cards being 100% Fluid-based. Go for the former for full tilt damage, or the latter if you still feel like you need some extra Spirit P for the road.

Marisa’s Last Word is a board to the face, trading away Fluid for Body damage. As such, go for Stand-In Shrine Maiden (50% damage boost and Crit ACC up) for a full offensive or Eating Contest (45% damage boost and recovers 40% HP) for a more balanced option.

Go with her third skill, Waterproof Hakkero for a boost to her Accuracy and providing the team Spirit P and Agility to open up their options. Next comes her second skill, Magic Surfboard to allow her to hit 2 Spirit P on turn 1, greatly improving her output from the get go while also providing defensive options to her and her team via Barrier recovery while helping her set up Spell Card buffs with Quick. Start hitting those waves hard with her first skill, Shroom Sports Drink for an quick supply of Yang ATK, Yin ATK and Crit ATK for her party.

Amazing Star and Water break, with some Earth thrown in for change

The Magician on Vacation packed a suitcase filled with Star and Water, with features on almost every single line of her attacks. The exception is her Spread Shot, which replaces Water with Earth Breaks instead.

Almost anything Marisa does will provide a buff to her team. Using Skills? Using Spell Cards? Even Boosting and Grazing will endow her team with some form of Yang ATK, Yin ATK, Crit ATK, Accuracy and/or Agility buff. This all comes with a bountiful source of Spirit , ensuring her team is ready for fun in the sun all day!

Marisa’s seemingly unstoppable drive to enjoy her holiday comes in the form of incredible HP Recovery from most Anomalies, as well as her attacks. She can also put up multiple sources of Barriers for her entire team, prolonging any session in the water as long as she wants.

Marisa can break Freeze and Paralysis anomalies with her attacks, as well as guarantee a stun on a single enemy with a 3P Spread Shot

Marisa unfortunately falls short on her offensive, lacking broad Killers that set her apart from the top of the chaff.