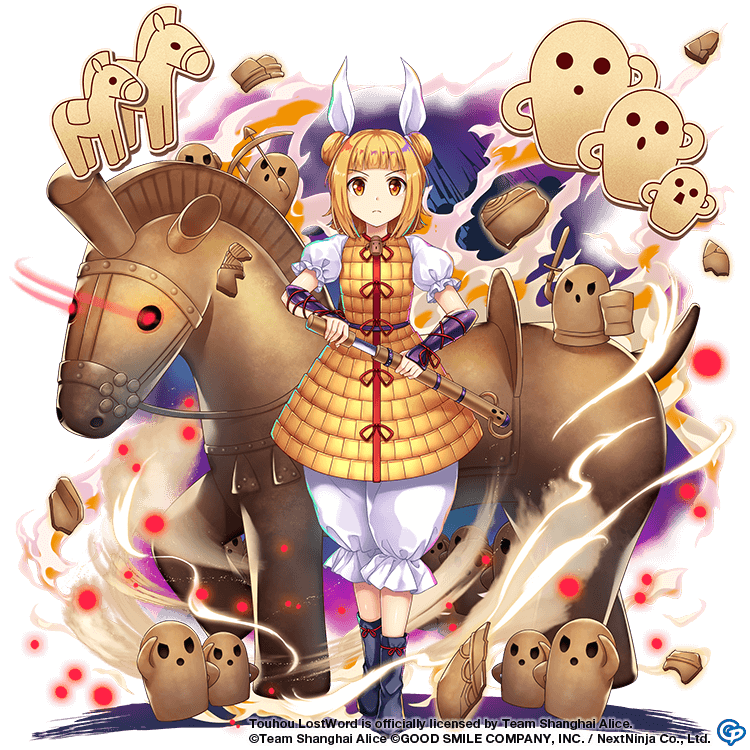 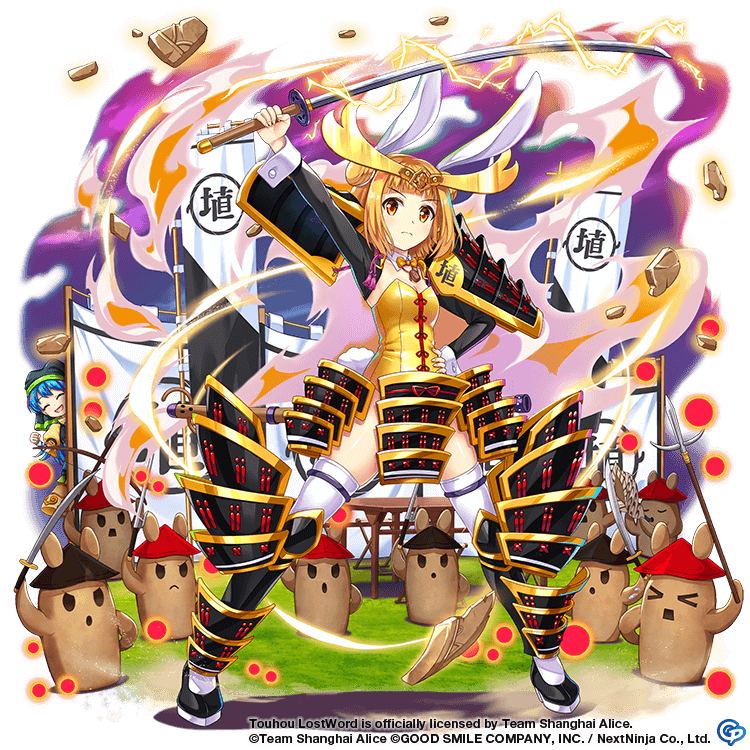 Mayumi Joutouguu's Spread Shot (a Touhou LW original). In this attack, she slashes her opponent using the sword she always carries. According to the philosophy of the Five Phases, earth bears metal, so ceramics made from the earth are as hard as metal.
Haniwa Infantry

Mayumi Joutouguu's Focus Shot (a Touhou LW original). In this attack, her haniwa infantry advances. Mayumi is the leader of her haniwa soldiers, so they should listen to her orders. 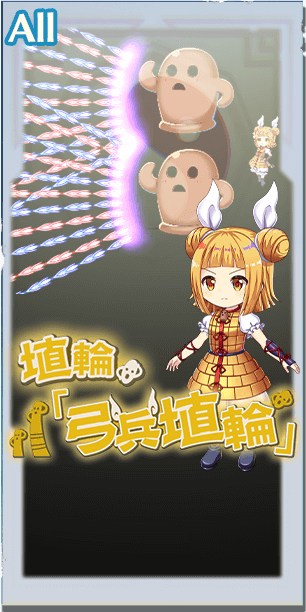 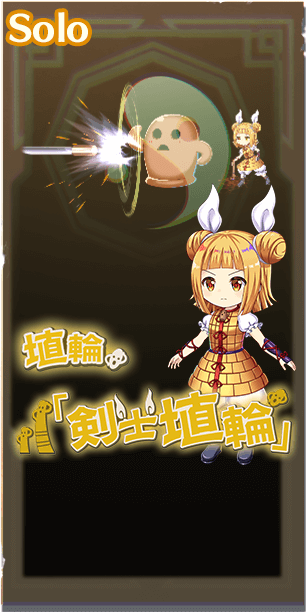 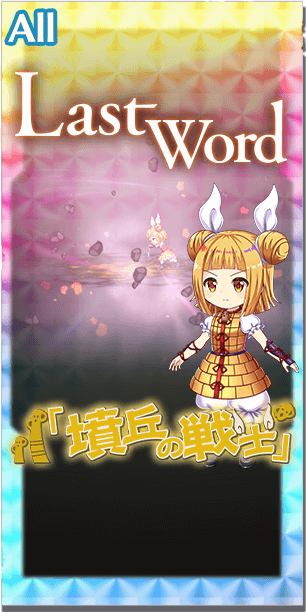 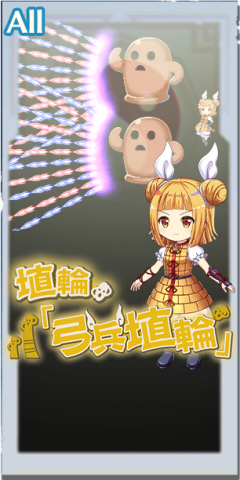 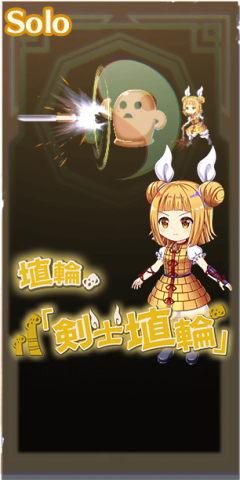 Mayumi Joutouguu's Spell Card. She fights along with a haniwa swordsman in this attack. Many humanoid haniwa figures have the appearance of heroic swordsmen. It is thought that Mayumi herself is also a haniwa in the shape of a fencer.
*Pre- and Post- effects assume max level. Effects per level can be viewed here.
Pre-Attack Spell Card Effects 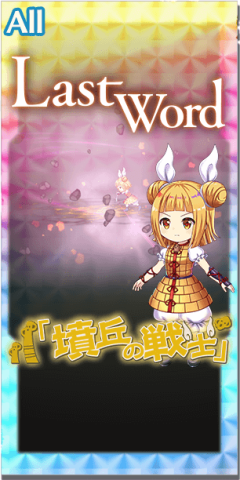 Mayumi Joutouguu's Last Word (a Touhou LW original). Mayumi herself rides a haniwa horse and fights in this attack. Haniwa soldiers are strong warriors who fight against animal spirits without needing any rest. Her days must be extremely harsh. It is a mystery what Mayumi is thinking during the days of never-ending battle. Perhaps haniwa don't have such thoughts. Only the Sculptor God (Idola-Deus) knows the truth.
*Pre- and Post- effects assume max level. Effects per level can be viewed here.
Pre-Attack Spell Card Effects

Mayumi Joutouguu was released on May 5th, 2022 in Festival: Loyalty vs. Schemes.

Mayumi Joutouguu is the second in command to Keiki Haniyasushin, who is the leader of the human spirit rebellion in Hell as well as her creator. She protects the Primate Spirit Garden on Keiki's command, as it's the stronghold for their liberation army to fight against the other animal spirit armies run by Yachie Kicchou, Saki Kurokoma and Yuuma Toutetsu. Mayumi's ability, to directly convert loyalty into strength, is evident in her near flawless command of Keiki's Haniwa army. But even aside from her ability, Mayumi is an expert bow, sword and horseback fighter in her own right. With this in mind, it's no surprise that she's an S-Tier Friend.

In terms of farming, Mayumi has good capability for farming 3-3-3 and a future story card stage. Although there are a lot of other options already to farm the mentioned stages, as a General Friend, Mayumi is one of the greater options as she is able to do it at the cost of 8 SP (Max Limit Break, No Awakening). In relation to this, her Last Word, Warrior of Burial Mounds, has 4 Slash and 2 Sharp bullet line types, which makes the Mysterious Sword Master story card be one of the best story card options to equip as it provides a huge boost towards the majority of her bullet lines.

When it comes to challenging content, Mayumi’s team support is heavily YANG oriented as proven by her Ability, Capable of directly turning her loyalty into strength, directly giving 1 YANG DEF UP per Boost used to the whole party as well as her Skill 2, Battle Cry, which gives 3 YANG ATK UP and 2 YANG DEF UP to the whole party. However, this skill has the disadvantage where the buff turn duration is severely limited (1 turn for YANG ATK UP and 2 turns for YANG DEF UP). As part of her YANG based support, at 1.00P, her Spell Card 1, Haniwa “Archer Haniwa”, guarantees 1 YANG DEF DOWN to her target and her Spell Card 2, Haniwa “Fencer Haniwa”, has the Pre ATK Effect that gives her target YANG DEF DOWN for 3 turns where the amount of the debuff she inflicts is scaled with boosts.

As an expert of the bow, there’s no doubt that she has no problem in sustaining her accuracy as proven by her Spell Card 1, Haniwa “Archer Haniwa” with the Pre ATK Effect of giving 3 ACC UP for 2 turns as well as her Skill 1, Haniwa’s Focus, which provides 2 ACC UP for 3 turns with a reasonable 4 turn skill cooldown. In regards to her other skills and abilities, she can extend her survivability using her Skill 3, Endless Stamina, as it heals 60% of her HP plus it also gives her 1.00P which is helpful to further boost her capability to keep on fighting.

For barrier breaking, Mayumi’s main focal point leans on Earth and Metal elemental breaks with the bonus of having a back loaded Poison anomaly break on her Last Word. Her Spread Shot have access to 1 Earth line at 1.00P and 1 Metal line at 2.00P. Her Focus Shot has a total of 2 Earth lines and 1 Metal lines, with the first Earth line being able to be directly accessed at 0P. Both of her spell cards provide an equal amount of Earth and Metal breaks, with Spell Card 1 having Metal as the 0P element and Spell Card 2 having Earth as the 0P element. Her Last Word provides a 4:2 ratio for Earth and Metal which ends up making Mayumi as a potent Earth nuker.

The secondary effects and scaling for Mayumi’s attacks are as follows:

As Spirit Power is fundamental, you cannot go wrong with equipping Spirit Power UP cards. The best would be The Witch of Scarlet Dreams as it provides 2.00P UP, unmatched by any story card that currently exists in the game. An alternative would be story cards like Photogenic Girls, It’s Spring!, and Midnight Tea. On the other hand, she can equip cards like How Irrational… (3 YANG ATK UP + 20% Sharp Bullet UP) on her Spell Card 1 and Mysterious Sword Master (50% Slash Bullet UP + 2 ACC UP) on her Spell Card 2, and alternatively, you can just go with YANG ATK UP cards.

Due to the 4:2 Slash to Sharp Bullet type ratio of her Last Word, she heavily benefits from the passive given by the Mysterious Sword Master card. Alternatively, you can use Keystone as the majority of elements in her Last Word is Earth. Do note that there will be better story cards for her in the future.

It is recommended to level up Mayumi’s Skill 3, Endless Stamina, first primarily due to the 1.00P UP it gives at MAX level which allows her to access 2.00P easily. Her Skill 1, Haniwa’s Focus, and second skill, Battle Cry, would have their priorities be dependent on how you want to use her. Her first skill gives her 2 ACC UP for 3 turns which allows her to have sustainable accuracy and her second skill gives her party 3 YANG ATK UP for 1 turn and 2 YANG DEF UP for 2 turns, which is part of her team utility.

+ P0 Earth on Focus Shot.
+ Very good Last Word, especially when paired with her best story card.
+ Decent access to Earth and Metal elements.
+ Decent Yang-oriented support for the team.
+ Can sustain her own Accuracy.

- Low turn duration and bad cooldown of Skill 2 gimps her potential to support the team.
- Has low potential in story card farming.