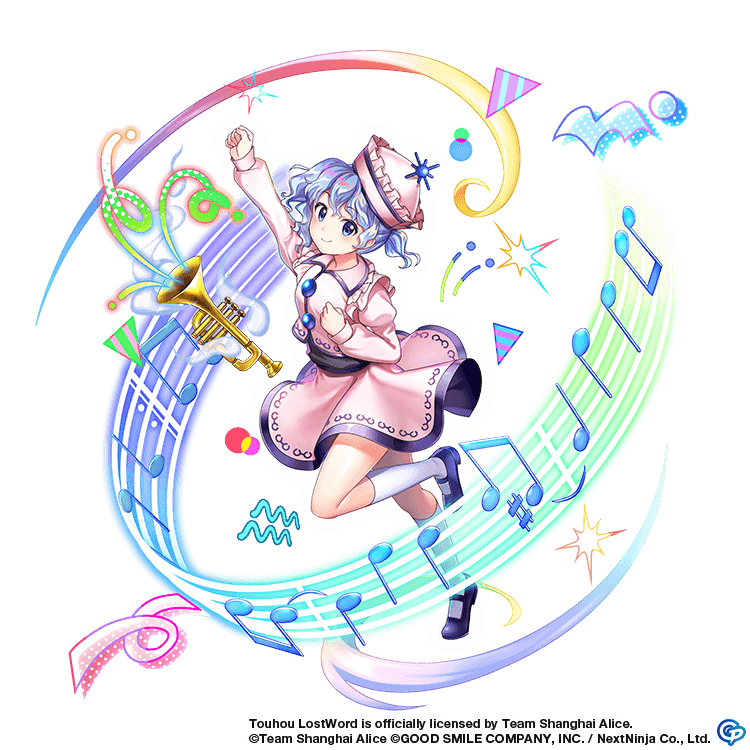 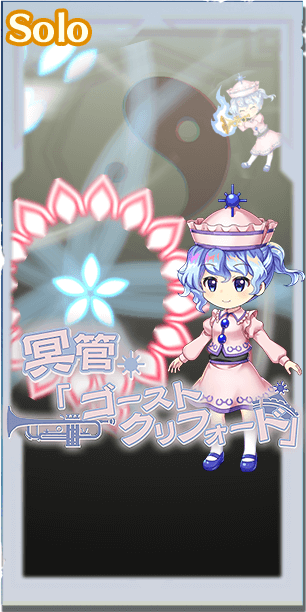 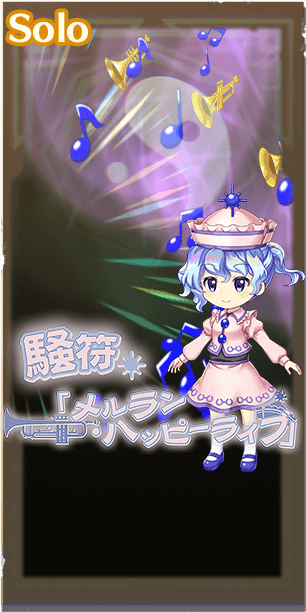 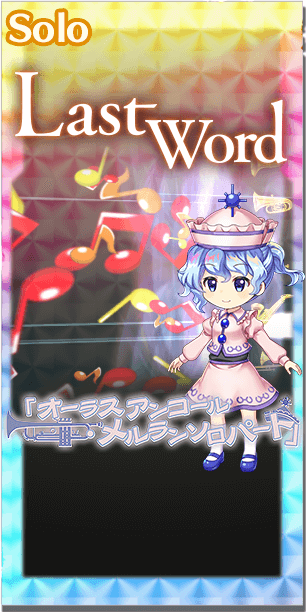 Immune to Barrier Status: Paralyze.
DMG from resisted elements 25% DOWN.

Brought into existence by Layla Prismriver, Merlin performs in the Prismriver Ensemble along with her other sisters, Lunasa and Lyrica. To differentiate her notes from her siblings, Merlin's trumpet performs melodies that call toward listeners' emotions and amplifies their happiness to irregular levels until they cannot control themselves. She has an optimistic personality to match the happiness releases from her instrument's performance. Releasing music that makes the audience lose themselves would be dangerous for her own party, so instead Merlin specializes as a Debuff unit that turns the rhythm onto enemies. With a wide variety of debuffs to share, Merlin works hard and stands out as a very serviceable S Tier Friend.

The debuffs are the main appeal of Merlin's kit, seen from the affects of her spell cards and skills. She is not shy of applying Freeze to her enemies' barriers, either freezing 2 barriers with her second spell card, Noise Sign: Merlin Happy Live, or passing 2 Freeze barriers to all opponents with her first skill, Jamming Tube. While having no way to break these anomaly Barriers herself, another Friend with Melting bullets can easily synergize with Merlin and work toward Full Breaking the enemy. It helps that Merlin's other two skills, Military Bugle and All-Night Noise, target every opponent as well with the helpful debuffs of Yang DEF DOWN by 2 levels or Evasion DOWN by 2 levels respectively. Unlike her spell cards, her skills can be used repeatedly over longer battles, meaning Merlin can provide debuffs consistently throughout challenging content.

It helps that Merlin does not only weaken her opponents, but can crush them with heavy damage as well. Her Last Word, Final Encore - Merlin Solo, is frontloaded with a 3-1-1 spread so that most of the bullets only need 1 Spirit Power to access. Considering the target's Yang DEF decreases by 3 levels combined with the other Yang DEF and Evasion debuffs from her skills, Merlin's Last Word can serve as a helpful Solo nuke for many farming needs.

Unfortunately, Merlin's performance contains a few low parts to prevent her from being at the top. Outside of her Last Word, she needs at least 1 Spirit Power to access any of her Wood or Water breaks on a basic shot or spell card. Even then, the amount of elemental breaks she has access to are rather low. Having a dual-element Last Word makes it difficult to maximize its damaging potential as well, especially considering how every bullet obtained from 1 Spirit Power is Water while the initial attack is only Wood.

Even without a wide variety of elemental breaks, Merlin gives a great amount of support to the party through weakening the opponents in various helpful ways. The Yang DEF debuffs open opportunities for fellow Yang attackers, and everyone benefits from hitting enemies with decreased Evasion. Merlin is a wonderful Friend when it comes to performing against the enemy, but just avoid those same tunes from reaching your ears...

The values of her Last Word's scaling are as follows:

Yang ATK UP helps Lunasa hit even harder, and as such it's greatly appreciated. Otherwise, Yang DEF UP goes well with the high Hard scaling (if a bit let down by her only decent base Yang DEF) on her Last Word, and she can make good use of Spirit Power UP for extra Breaks, as well as damage in the Arena.

As Merlin already has Yang ATK UP and Accuracy covered, Energy DMG UP is her best bet, with Thunder Beat being a particularly great option. Otherwise, look to Wood DMG UP or Yang ATK UP.

Military Bugle is her best skill, due to the Yang DEF DOWN, and should be leveled first. Secondly, All-Night Noise is great Accuracy support and should be raised next. Lastly, Jamming Tube can wait until you have need for Freeze (such as if you own Cirno with her Freeze Breaks).