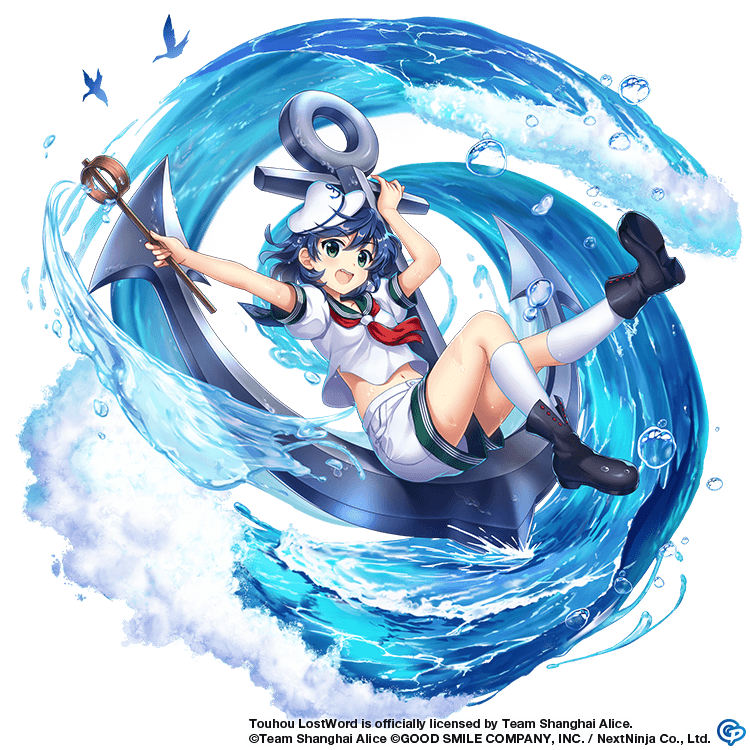 The Ghost Left From the Shipwreck Accident

Minamitsu Murasa's Spread Shot (a Touhou LW original). She throws her favorite anchor like a boomerang in this attack. Boomerangs aren't meant to return after hitting their target, but Minamitsu's anchor does because she's a ghost! (Which doesn't really explain anything...)
Anchor Shot

Minamitsu Murasa's Focus Shot (a Touhou LW original.) She shoots a phantom of an anchor (Yes, anchors also have phantoms!) directly into her target. Minamitsu is a ghost and a ship phantom, making her unique as most youkai do not originate from phantoms. She differs from usual phantoms because she has a distinct and corporeal body. This anchor phantom may have gained a physical form in a similar manner to Minamitsu―through spite and the fear of others. 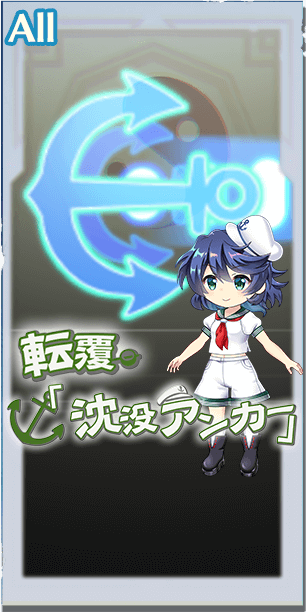 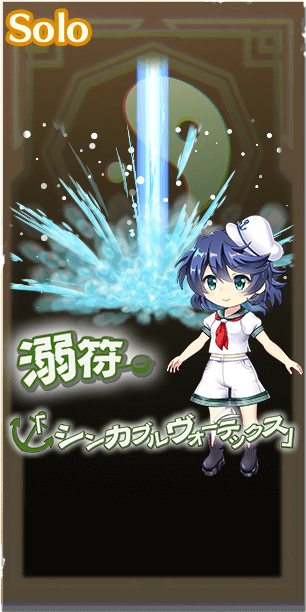 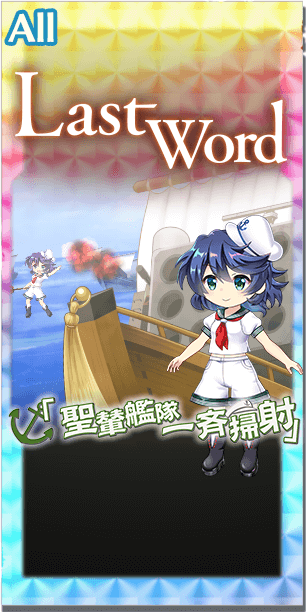 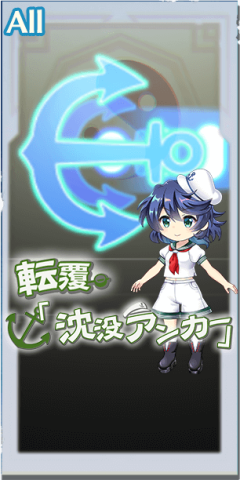 Minamitsu Murasa's Spell Card. She swings her anchor with such strength that it would sink a ship. There are many different types of ship phantoms, and some are said to sink ships by using an anchor. Minamitsu may have inherited their legacy. Ship phantoms must be very skillful and knowledgeable if they can sink a whole ship with a single anchor.
*Pre- and Post- effects assume max level. Effects per level can be viewed here.
Pre-Attack Spell Card Effects 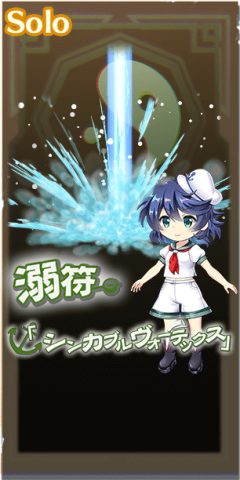 Minamitsu Murasa's Spell Card. She attacks her target with a violent swirling maelstrom of water. This Spell Card is more than capable of sinking a ship, but whirlpools that occur in nature can be just as dangerous. Particularly violent whirlpools contain many bubbles that make the ship less buoyant and a strong current that drags the ship down into the depths like a monstrous antlion larva of the sea.
*Pre- and Post- effects assume max level. Effects per level can be viewed here.
Pre-Attack Spell Card Effects 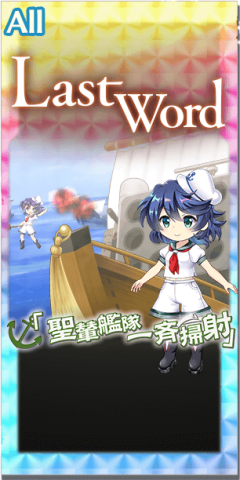 Minamitsu Murasa's Last Word (a Touhou LW original). The Palanquin Ship is usually in the form of Myouren Temple, so perhaps this ship is a replica, or maybe she uses the real one in secret... (Though it is possible that Byakuren gave her permission.) The way in which she creates a semblance of a fleet by making each ship really small is somewhat reminiscent of how a certain youkai used the Seeds of Unkown Form on the fragments of the Floating Storage. This Last Word lets Minamitsu act the part of an Admiral of a whole armada... for a little while, at least.
*Pre- and Post- effects assume max level. Effects per level can be viewed here.
Pre-Attack Spell Card Effects

Minamitsu Murasa was released on October 20th, 2021 in Captain of Shipwrecks.

Minamitsu Murasa, or “Captain Murasa”, is the ghost of a young girl who fell victim to drowning overseas with the ability to sink ships. First appearing to us in Unidentified Fantastic Object, Minamitsu died long ago when her own ship was wrecked and was swallowed up by the seas. Afterwards, Murasa became a phantom, still bound to the very seas that ended her life with the unique ability to cause similar shipwrecks. Eventually Murasa became a renowned figure overseas and was feared by many ship captains who made several attempts to stop her actions but came up with nothing. It wasn’t until Murasa met Byakuren Hijiri, who was sailing out to sea at the time, that circumstances changed. Murasa had attempted to also sink Byakuren’s ship knowing very well who she was. After Byakuren was sunk she resurfaced to above the water with the now reconstructed ship that Murasa had known to be destroyed long ago. Despite being a rather cruel phantom, Murasa is actually very light-hearted in personality and even turns out to be a reliable friend to Byakuren after reconstructing the ghost’s ship. In Touhou LostWord, Murasa is just as fearsome a phantom in-game as she is in her story, landing herself as an S-Tier Friend.

For farming purposes Murasa is very strong. Using her skills Murasa is able to ramp up quite a bit of speed for herself which compliments her 60/70/80/90/120/120 Slice values exceedingly well. For example, just using her skills alone she is able to generate 4 levels of speed for herself and her allies and another 4 using her ability. This ability of her’s makes her immune to Burn and adds 1 level of Self Speed, Accuracy, and Dodge for every stack of Freeze applied to her. Her skills collectively apply 4 Freeze Barriers to herself. That, in addition to both the multiple Yang buffs given to her using her skills and Last Word pre-attack, make her a menace for quick farming. However, that's not all. In Chapter 3 Act 2 a certain Spell Card drops that increases the power of her Last Word quite a bit, Giving her a whopping 50% increase in Mass-type damage for 1 turn.
Solo Stage Farms: 3-3-3

For longer and challenging fights Murasa continues to be strong and now has the ability to spend more time ramping up her Speed and overall damage. Using her first Spell Card, Capside: Foundering Anchor, she is able to provide herself with an extra 2 Speed (and another +1 Speed at a 60% chance). In addition, Murasa has 2 Water Breaks on her first Spell Card Capside: Foundering Anchor, 3 on her second Drowning Sign: Sinkable Vortex, and a whopping 4 Water Breaks on her Last Word Palanquin Fleet Bombardment. However Murasa does have a light downside as the ability to apply Freeze to herself means she has to keep frozen barriers around herself for her defensive buff, meaning you have to sacrifice some damage if you ever have to graze. She’s also a little handicapped when it comes to full auto at the moment, because it automatically uses up to 3 barriers right off the bat.

Overall, Captain Murasa does not disappoint as a unit and stays true to the powerhouse that she is in her lore, acting as a nuker who packs quite the punch.

The Slice values of Murasa's attacks are as follows:

Members of Yakumo Family allows Murasa's Yang ATK to be buffed with the benefit of the stats giving AGI which will help improve her damage due to Slice scaling. The Witch of Scarlet Dreams also serves to be a great recommendation, one for being a P UP card which is always beneficial, and two for having YANG ATK + AGI stats, which will help her a lot. Alternatively, you can go for Midnight Tea if you lack P UP cards for her.

This is hands down the best card for Murasa. The 50% Mass-type damage increase compliments her perfectly and makes her first turn damage that much more effective.

Murasa’s skills are all pretty even in terms of usefulness, though Hard-A-Starboard should be prioritized firstly for the additional Speed and Freeze that you get at level 10. It doesn’t matter too much which skill you prioritize next, though Bottomless Ladle could be more favorable for the early extra Barrier and Yang bonus.