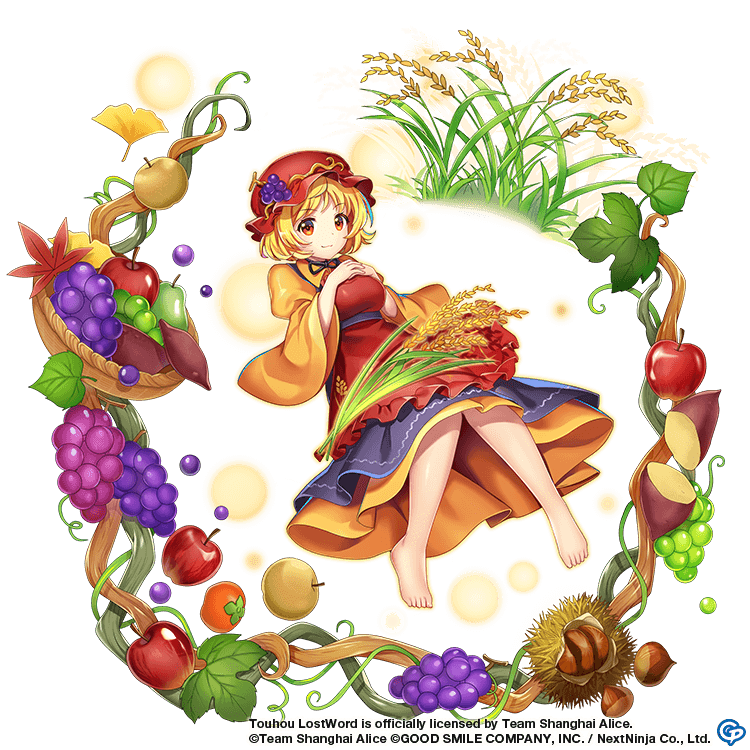 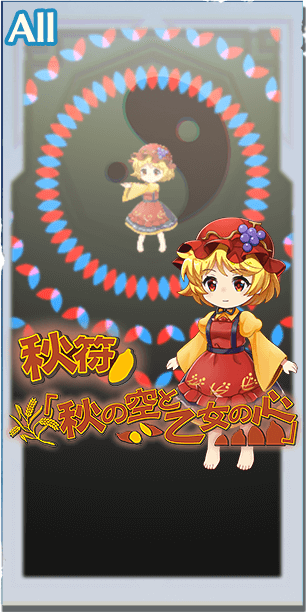 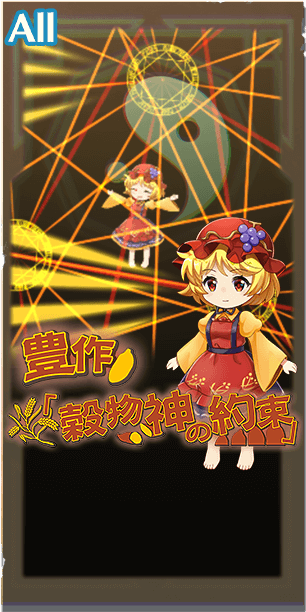 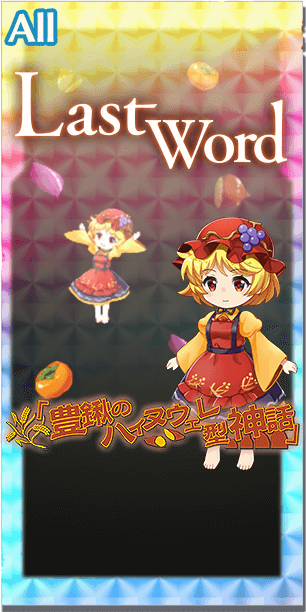 “I'm just one amongst the multitudes of gods. There are many more [on Youkai Mountain] just like me.”

Minoriko Aki, the Symbol of Abundance and Plenty, is a fairly simple goddess. Her domain is that of abundant harvest, and alongside her sister Shizuha, controls the season of Fall. Whilst a minor goddess even amongst the gods of harvest, she still has a bit of an ego, and gets rather depressed when the winter comes and her role for the year is over. However don’t counter out just because she’s a minor goddess, because she’s here to farm a bountiful harvest for you as an A+ Tier Friend.

For farming - outside of the fact she’s a literal goddess of the harvest, Minoriko’s primary use is in Full Autoing three wave stages, thanks to her All targeting Spell Cards combined with an All targeting Last Word. She’s not quite as good for event stages though - her Last Word not only deals somewhat low damage, it also has two separate elements at 1 Power, raising the chances that a Resistance will stop her in her tracks.

For harder fights, Minoriko shines in three areas. First of all, she has rather good access to Metal and Wood - Autumn Sign: The Autumn Sky and a Maiden's Heart gets 1/2/3 Metal Breaks for 0/1/2 Spirit Power, Bumper Crop: Promise of the Wheat God gets 1/2/3 Wood Breaks for 0/1/2 Spirit Power, and her Last Word, Toyosuki's Hainuwele Legend gains 2 Metal and 4 Wood Breaks in total at 3 Spirit Power. Secondly, she can also Break Paralyze and Poison Barriers - the former being a great asset that unfortunately needs to be combined with Paralyze inflicting units, which are much more abundant than other types of Anomaly barriers, and the later allowing her to combine with Medicine to overcome Barrier Anomaly Recovery, since Medicine can use a Poison inflicting Spell Card on the same turn that Minoriko Breaks them, preventing the enemy from recovering. Lastly, she provides the party with a decent amount of support between her skills Eager Wait and Prayer for Abundance, alongside the healing from Bumper Crop: Promise of the Wheat God and the uncommon  and coveted Power Link.

Minoriko is however a minor goddess of the harvest, so it only makes sense she’s lacking in an area. That being damage - she just doesn’t do a whole lot of it, between her lack of ATK UP, mixed scaling on her Last Word, and her Last Word being 3-1-1, meaning it can’t scale very well.

Still, her strengths are abundant and plenty. Give her a little praise and prayer, and she’ll work as hard as any other god for you, if not harder.

The success rate of Minoriko’s secondary effects, alongside her Hard scaling, are as follows:

Autumn Sign: The Autumn Sky and a Maiden’s Heart

Since Minoriko's primary job is to Break with her Spell Cards, anything that grants Spirit Power UP is your best bet. Otherwise, should you need her to do damage, alternate between Story Cards which provide Yin or Yang ATK UP in order to get the most damage out of her Last Word as possible, favoring Yin ATK UP. For stat sticks, look to cards that boost both Yin and Yang ATK, favoring Yin.

Since Minoriko doesn't do a ton of damage anyway and her Last Word being mixed means she doesn't benefit as much from ATK UP, she'll pretty much always run Accuracy UP for her Story Card. Should you bring along a teammate who provides Accuracy, favor a Story Card which provides Yin ATK UP.

Eager Wait is Minoriko’s best scaling skill, and should be prioritized first. After that, if you’re okay with a bit of RNG, bring Prayer for Abundance up to level 9 - the extra chance for a Barrier can be used to great effect if you’re patient, but level 10 only gives a 1 turn cut to cooldown which is rarely useful. Lastly, Autumn Enshrining Day can be brought up to level 6 relatively easily for 2 Levels of Yin DEF UP rather than 1, but additional levels can wait until you’re out of other people to train as it will rarely be worth the time it takes to train it up.

+Both Spell Cards as well as her Last Word are All targeting, making her fantastic for three wave Full Auto
+Possesses the rare ability to All Break Paralyze Barriers
+Can partner with Medicine to brute force past fights with Abnormal Barrier Recovery
+Slightly above average access to both Metal and Wood
+Solid healing and Barrier recovery support
+Has Power Link, which is always great

[JP] 6/1 LB 6.5 "Death and Revelation World Traum: Life and Death of a certain Illusion" Stream
Stream to start on June 1st at 2000 JST with the pre-stream starting at 1930 JST…
[JP] Tunguska Sanctuary Main Interlude + LB 6.5 PreCampaign 2
Second precampaign to get players ready for LB 6.5 to run from May 25th to June 2022…
Mash VA question
I know Mash had a change in VA near the end of Part 1. Did the NA version immediately…
Best Time to Use FP since we got Servant coins
I know I know. Another servant coins related inquiry. Honestly the update messed up my…
How many welfares do you genuinely prefer to gacha alternatives?
Love or performance reasons are both fine, but I’m leaning a bit more towards…
Read More