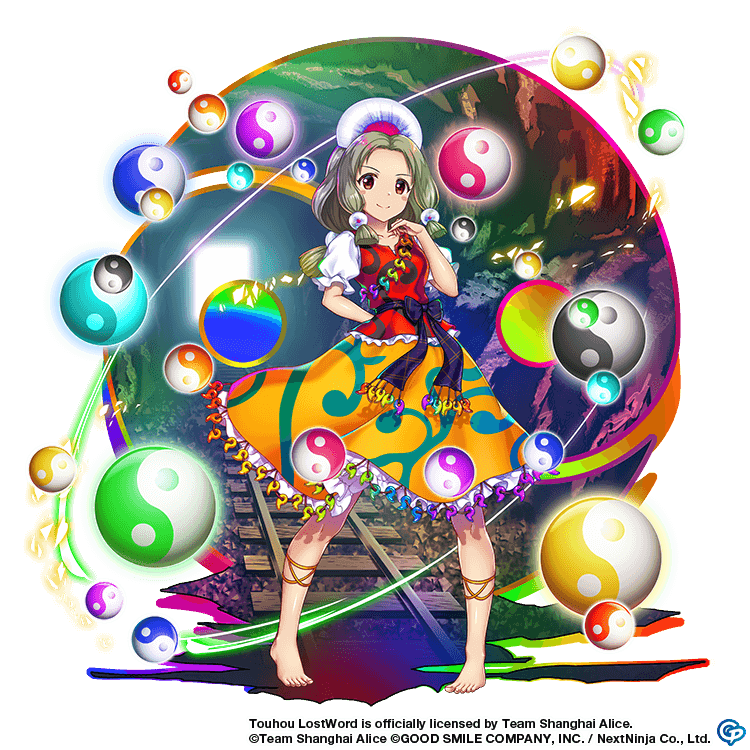 Misumaru Tamatsukuri's Spread Shot (a Touhou LW original). She attacks by firing her hand-crafted jewels. A misumaru is a loop of threaded jewels or beads that was usually worn as a necklace in ancient times. They were apparently a type of charm used as an implement in religious ceremonies or rituals, but they were also probably quite fashionable when worn as a normal accessory.
Plentiful Jewel-Making

Misumaru Tamatsukuri's Focus Shot (a Touhou LW original). She attacks by firing her hand-made jewels. A lot of skill and determination are needed to polish stones accurately into magatama. Just like how the worth of lenses is directly proportional to how finely they are polished, magatama are probably more potent as magic items the closer their form resembles the correct spiritual shape. 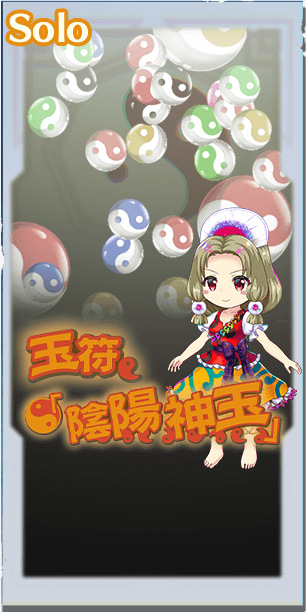 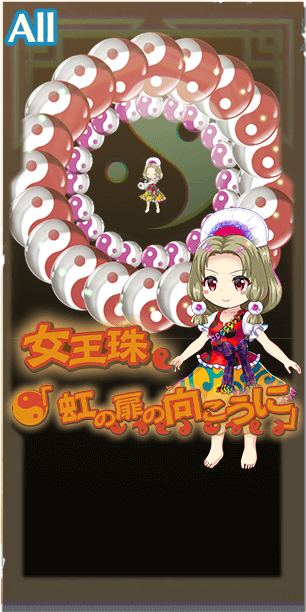 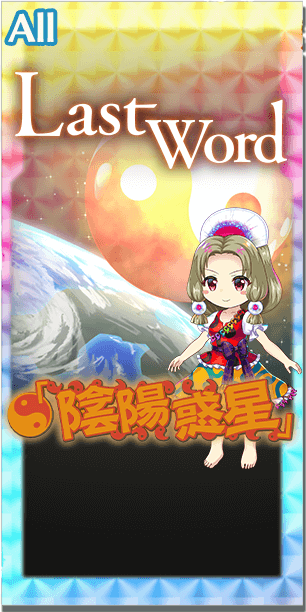 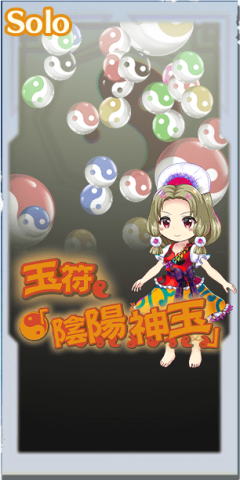 Misumaru Tamatsukuri's Spell Card. She shoots multiple Yin-Yang Orbs that ricochet off the edges of the screen. Yin and yang are forces that make up everything that exists in the universe. Yin and yang is also a philosophical concept that forms the basis for all relationships between opposites. The rule in Gensokyo that humans must battle with youkai was surely modeled after the ever-changing dichotomy of yin and yang.

Defining what ''the edges of the screen'' actually entails is a hot topic of debate among the dwellers of Gensokyo, but it is probably some sort of boundary. Yin-Yang Orbs are apparently famous for their ability to bounce off this boundary. They have also long been known as ''gatekeepers.''
*Pre- and Post- effects assume max level. Effects per level can be viewed here.
Pre-Attack Spell Card Effects 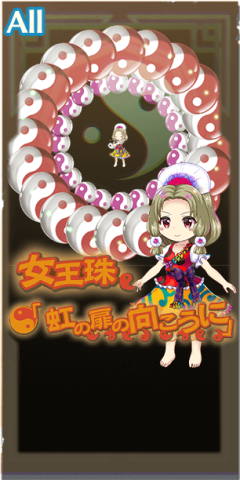 Misumaru Tamatsukuri's Spell Card. She shoots Yin-Yang Orbs of various colors in this attack. The Rainbow Dragon Cave, which Misumaru claims to own, is a dangerous place. Supposedly, there there is a zone that is devoid of oxygen deep inside. Misumaru was in the Rainbow Dragon Cave during a certain incident to warn any humans who ventured inside. Behind the door that shines with all the colors of the rainbow lies a curse... called suffocation.
*Pre- and Post- effects assume max level. Effects per level can be viewed here.
Pre-Attack Spell Card Effects 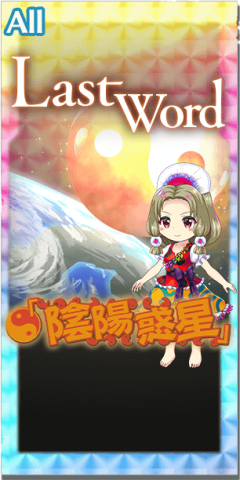 Misumaru Tamatsukuri's Last Word (a Touhou LW original). She drops a colossal Yin-Yang-Orb on her targets. Since the whole universe is bound by the philosophical concept of yin and yang, the stars and planets in the heavens should also obey the principles of yin and yang. Incidentally, most celestial objects are spheres, and the origins of Izanagi Objects are a mystery...

There is a theory that many Izanagi Objects once resided within the Izanagi Plate that has now fully sunk beneath the earth. But could they have been small celestial objects floating in space before they got there?
*Pre- and Post- effects assume max level. Effects per level can be viewed here.
Pre-Attack Spell Card Effects

Misumaru Tamatsukuri is another crafty god out of the many within Gensokyo, but instead of crafting schemes, she crafts objects you might be more familiar with. While nowadays she crafts magatama, divine items that Misumaru can use to store people’s souls and identify their thoughts, she claims to be the one that crafted Reimu Hakurei’s yin-yang orbs, an important artifact that Reimu relies on for youkai extermination. The power of the orbs themselves still remains a mystery, which also puts into question Misumaru’s relation with the Hakurei line as a whole. While the intricacies can be theorized for hours, at the end of the day Misumaru doesn’t mind lending her own power to fight, and in doing so places her as an S Tier Friend.

For immediate damage and raw power, Misumaru primarily serves as a mixed (Yin and Yang) attacker with a Yang Last Word, Yin-Yang Planet. This is somewhat problematic, as the pre-ATK effect for Yin-Yang Planet buffs both Yin ATK and Yang ATK by 3 levels (3T), which doesn’t really help when her ultimate attack is going to only need that Yang ATK, and afterwards she’s not really going to need the Yin ATK. At the very least, she makes up for this with decent Hard and Slice scaling on most of the backloaded attack, something that can be taken advantage of during setup. Thankfully, since it is entirely composed of Heavy bullets, it has the perfect story card to optimize its damage and make Misumaru still a great pick for damaging strikes.

Misumaru’s mixed offensive nature plays into her teamwide utility as well, as she has plentiful buffs to provide. First off, her second spell, Queenly Gem: Beyond the Rainbow Door, buffs the team’s Yin ATK by 2 levels (3T) to help out fellow Yin nukes. A similar, slightly more niche effect comes from her first skill, Izanagi Object Item, due to its ability to buff all allies’ Yang DEF by 2 levels (3T). While this may only help Yang nukes with Hard scaling, any Friend can benefit from the 2 levels of Accuracy UP (2T) from her third skill, Mysterious Regalia. For debuffs, Misumaru can decrease all foes’ CRIT DEF by 2 levels (3T) with her second skill, Imperial Regalia Spell. While a bit more difficult to take advantage of in fights with multiple enemies, her first spell, Orb Sign: Yin-Yang Divine Orbs, lowers a singular foe’s Yin DEF and Yang DEF by 2 levels (3T) for indirect buffs to both types of nukes. For a Technical Friend, Misumaru can actually spend a lot of time assisting the team more than herself!

Of course, Misumaru can still benefit herself whenever necessary. All of her skills provide a special boon to herself, from Izanagi Object Item’s great 1 or 2 barrier restoration to Mysterious Regalia’s 1.00 Spirit Power gain to help dish out heavier attacks. Imperial Regalia Spell applies Burn to herself, something that grants Misumaru offensive buffs. Blind anomalies provide her defensive buffs, something that Izanagi Object Item also provides. Blind is something she also applies 3 layers of to all foes after using Queenly Gem: Beyond the Rainbow Door, something she can follow up with by using Yin-Yang Planet at 3P her Spread shot, String of Magatama, at 1P for Blind anomaly breaks. It’s already a great 3 anomaly breaks, but Misumaru holds great elemental breaks as well, in terms of Earth and Star. She gets an All-target 0P Earth spam option from her Focus shot, Plentiful Jewel Making, and all of her spells contain an even 3 Earth and 3 Star, making her great for breaking either element.

Overall, Misumaru is holding onto a lot of power, able to craft up barrier breaks and debuff to cripple opponents just as quickly as she can buff her team. Her mixed attacking may lead to some confusion when trying to nuke, but she still bounces back with good self-buffs and abilities to turn Burn and Blind anomalies into even more buffs. Her stern nature and mystery being the yin-yang orbs may make her difficult to approach, but she will definitely be a great asset in battle!

Misumaru will definitely appreciate the Spirit Power from The Witch of Scarlet Dreams due to her backloaded Last Word. Afterwards, you should focus on optimizing that Last Word’s Yang power through Yang ATK buffs. How Irrational… gives both 3 levels of Yang ATK UP while also providing Yang ATK stat sticks. Waiting in Comfort is a similar case, but it grants both Yang ATK and Yang DEF to make Misumaru’s Hard scaling do a lot as well!

The Secret God in the Sky is a very easy choice for this Last Word slot, considering it will give a 50% buff to every bullet of this attack due to being entirely made of Heavy Bullets. Dropping Keystones isn’t the worst choice due to buffing both Heavy Bullets and Earth attacks, but the Heavy Bullets are on the whole attack, while Earth is only on half of it.

Misumaru is interesting in the sense that her first two skills should really be leveled up to bring down their cooldowns so they are more usable in long fights. Even then, her third skill, Mysterious Regalia, should be prioritized for its 1.00 Spirit Power gain that allows her to reach 2P on turn 1. Afterwards, Imperial Regalia Spell, her second skill, is important to prioritize for pure strength, both from CRIT DEF debuffs and the offensive buffs self-Burn provides. Her first skill, Izanagi Object Item, may be last, but the barrier restoration and teamwide Yang DEF buff should not be looked over. It’s just a shame Misumaru doesn’t gain buffs from Grazes, which would make the additional barriers even better.

- Confused mixed attacker; doesn’t buff Agility for Slice scaling
- Not so focused on a specific stat to buff