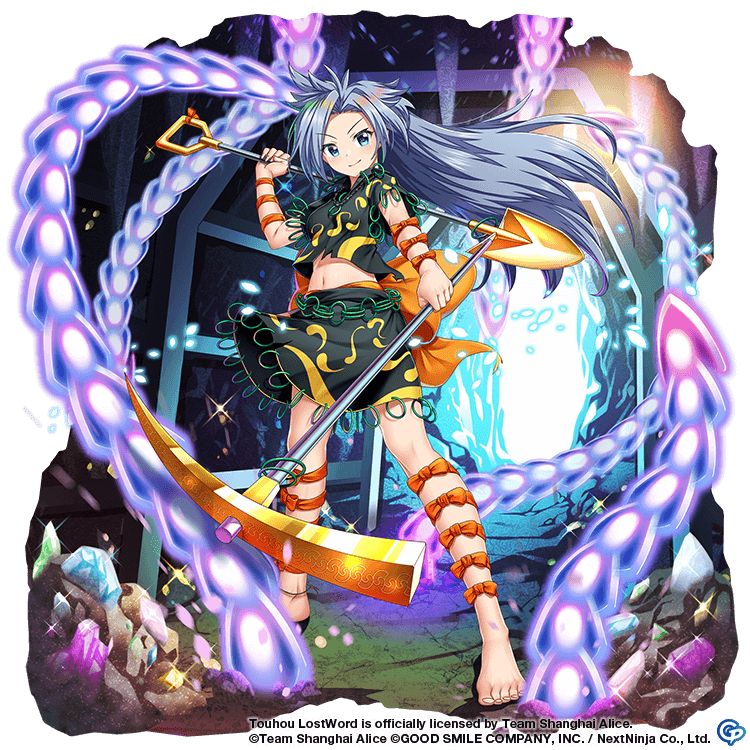 Momoyo Himemushi's Spread Shot (a Touhou LW original). This is a good attack for a digger. The shovel would probably be more durable and do more damage if it was made out of iron or diamond, but perhaps Momoyo uses a golden shovel because she is just that confident in her skills as a fighter. No, this shovel might actually let her mine really fast... This must be why there are holes all over the Youkai Mountain.
Golden Pickax

Momoyo Himemushi's Focus Shot (a Touhou LW original). This is a suitable attack for a digger. This pickax is also an efficient item for digging holes. However, if she digs all the way down to Former Hell, she might find some ore that would let her create even better equipment, like cherry crystals or even the malignant Hell gold ore. 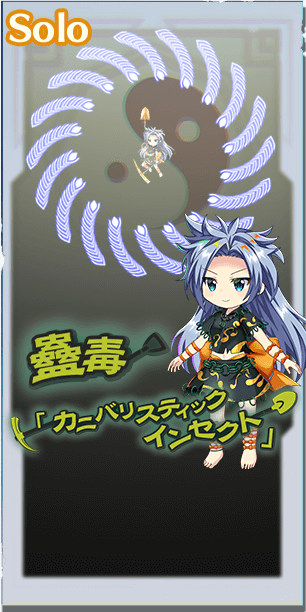 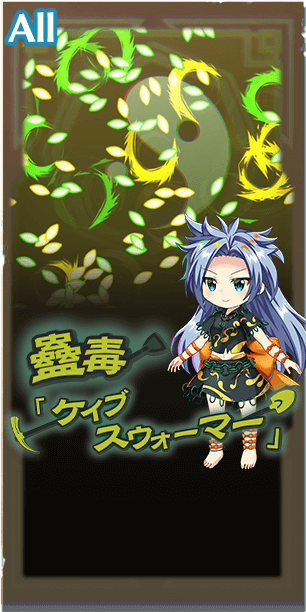 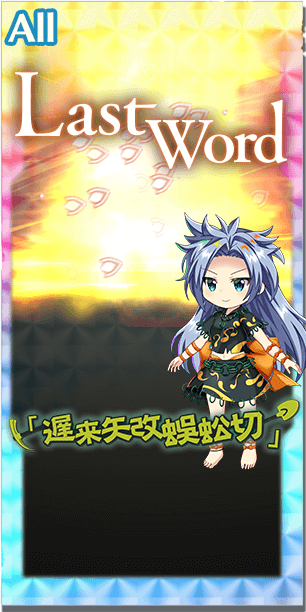 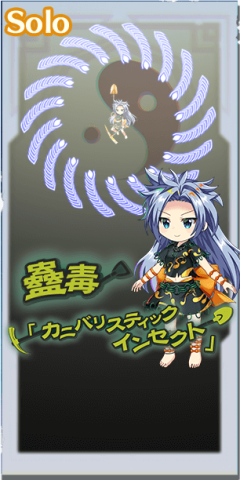 Momoyo Himemushi's Spell Card. An attack performed by insects that survived a kodoku curse ritual. This ritual involves mixing several insects in a container and letting them consume one another until only a single insect is left. These insects are foul gluttons that even ate the weak members of their own species. They don't care if others insult them by saying that they should have died rather than live through such filthy and vile means. However, they didn't necessarily eat just to survive.

Kodoku is a type of curse that stores an exorbitant amount of magical power within a barrier. However, the only one who gets to claim this power is the sole insect that survives... Does Momoyo or any of her opponents realize that this is a microcosmic example of an economic society? Also, Momoyo herself is not technically an insect.
*Pre- and Post- effects assume max level. Effects per level can be viewed here.
Pre-Attack Spell Card Effects 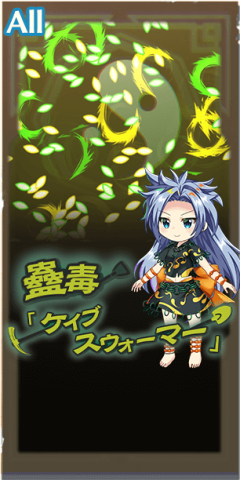 Momoyo Himemushi's Spell Card. An attack performed by insects that writhe within a cave. Momoyo is the foreman of countless hole-digging youkai. And these youkai are probably bug youkai like herself that prefer to dwell in deep, dark burrows rather than under the light of the sun. Gensokyo is the perfect place for such eccentric youkai.
*Pre- and Post- effects assume max level. Effects per level can be viewed here.
Pre-Attack Spell Card Effects 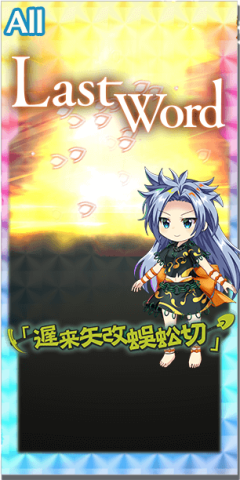 Momoyo Himemushi's Last Word (a Touhou LW original). She recreates a weapon closely connected with herself, which is an arrow yet also a sword. An oomukade (giant centipede) greater youkai was defeated by a legendary hero in the past. This was accomplished with an arrow imbued with the blessing of the Hachiman deity. However, the finishing blow was dealt with a sword, just like in the legend where the nue was exterminated.

But how did this hero obtain a weapon capable of defeating a greater youkai? It was bestowed to him by the dragons of the Dragon Palace, who were under attack by the oomukade. Of course, this hero could only properly wield this legendary weapon thanks to his mighty skills. There are differing accounts as to when the Dragon Palace gave this weapon to the hero. Some tales say it was before he defeated the oomukade, and some say it was after. This is probably because he was given a weapon or a blessing before the fight and received a reward afterward. It is particularly interesting how the sword, Chikushi, and the armor, Hiraishi, said to have been gifted to the hero by the Dragon Palace, both have the kanji character for ''arrow'' in their names. This surely indicates that they were created by either embedding, reforging, or recasting the arrowhead imbued with the blessing from Hachiman. That would explain how Chikushi later became known as Mukade-Kiri, the Centipede-Cutter.

In the end, it is still unclear whether the Dragon Palace interfered before the youkai extermination or after... That place is ever mysterious.
*Pre- and Post- effects assume max level. Effects per level can be viewed here.
Pre-Attack Spell Card Effects

Momoyo Himemushi is an oomukade, a youkai resembling a giant centipede that is powerful enough to eat dragons, or at least that’s what the rumors say. She made her first appearance in Unconnected Marketeers as an Extra Stage boss. With her carefree personality and immense power, she mines her way from the Rainbow Dragon Cave to Touhou LostWord where she solidifies her position as a Yin focused DEST Class SS-tier friend.

There’s plenty to love about her kit but let’s start with her Shots; Both of them are solo targeting, but they have great effects. Her spread shot, Golden Shovel, which at 1P can be used as a Poison anomaly breaker, and it has a chance to lower the enemy’s CRIT DEF by 1 with the rates being 35%,50% and 75% at 0P, 1P and 2P respectively. Now to her Focus shot, Golden pickaxe, giving her access to a guaranteed 0P Poison infliction and self accuracy buff as long as the attack lands. At 2P, we have a guaranteed buff to her own CRIT ATK and Accuracy alongside another Poison layer infliction, and lastly, another guaranteed self accuracy buff at 3p (of course as long as the bullet lands). One last thing to note aside from her killers, is how the sum of her Hard scaling on her Focus Shot is 150% which can build up some nice damage.

Then we move on to her skills; Her 1st and 3rd skills combined, Dig Up & Pick Up + Eccentric Gourmand, give her the ability to have a team wide debuff of -8 CRIT Evasion on turn 1, alongside +5 Yin ATK, 3 of those being party-wide, and a +2 party wide CRIT ATK, plus a bit of defensive support in the form of +3 Yin DEF. Her 2nd skill, Combat Mania, while simple, is potent. It provides 1.75 Spirit Power and Charge, so Momoyo can easily be set up to strike after her supporting teammates. Quickly going over her passives because they’re all rng-reliant, they’re still awesome when they work, as an 85% decrease can save her from rough attacks and if she’s at 25% HP or less, she has a 50% chance to take no damage. There’s also her last passive, the free 1.20 Spirit power that can trigger at the start of every turn with a chance of 25%.

Her skills really highlight how much she loves combat, as she thrives when against powerful opponents. This is also really apparent in how every bullet line in her Spell Cards (including LastWord) is elastic. Meaning she has a higher chance to deal critical damage the higher the target’s attack is.

Let’s go over her spell cards in detail; Her first spell card has a pre-ATK effect that buffs her team’s Yin DEF and lowers her opponent’s CRIT evasion by 2 levels for 2 turns. We can notice that on turn one, with this SC coupled with her skills, she maxes out her Crit Evasion on her opponent easily, but this isn’t the only attack that allows her to do that on turn one. Now to the actual layout of the attack, it’s a fully Earth Yin Sharp bullet solo spell card with a backloaded layout (1/1/3) and a bit of Youkai & God killers and some Hard scaling (40% in total). A small detail to note here is that her crit rate progressively rises from the first bullet lines to the last 3, while her accuracy lowers a tiny bit.

Momoyo’s 2nd Spell Card, an All targeting attack with a pre-ATK effect which applies Poison to all enemies and it scales in regards to Boost levels for a max of 3 layers at max boost. It is 2 thirds Metal Slash bullets and a third Normal Earth bullets, and with a 1/2/2 layout, it is backloaded. But it comes with the post-ATK effect of gaining 1.5 SP. The interesting thing about this Spell Card is that the damage dealt is in relation to the enemies’ Yang DEF, which is lowered by the poison’s effect. That aside, this spell card can also act as an All targeting poison break at 2P. And we cannot forget that at the same boost level, it guarantees a self accuracy buff, with another being a coinflip.

Now to the star of the show, her Last Word, an All targeting Metal Yin Slash powerful finisher that also can break Poison anomalies. It comes with a pre-ATK effect consisting of Momoyo buffing her own Yin ATK and decreasing her opponents’ CRIT Evasion by 2 levels for 2 turns. While it is a backloaded attack, her 2nd skill should make it much easier to manage.

Armed with her golden pickaxe and shovel, you know she will mine through enemies and she’ll do it fast. And with her ability, her offensive strength is not to be underestimated.

Generally anything that provides Spirit Power or Yin ATK UP is good, which leads us to Story Cards like Overwhelming Firepower and The Witch of Scarlet Dreams

But specifically for her first SC, due to it being All Sharp bullets,  Sporadically Margaret can be a great damage boost, as it also provides great Yin Attack stats.  Although, do this only if you have more than you need because they're best used for their full effect on an Attack type friend.

Mysterious Sword Master easily takes the cake here due to Moyomo's LW being all Slash.

Thankfully, Combat Mania starts out at 1.25 spirit power, so it isn't the biggest priority. That would be the 3rd skill, Eccentric Gourmand, then you try to max out the first, Dig Up & Pick Up and finally the second for a bit more Spirit Power.

If you find that an extra 0.5 Spirit Power will be useful to you, feel free to max out Combat Mania second.

-While not her main way to deal damage, her Hard scaling isn't high on her Spell Cards
-Her relatively mediocre Killers on her attacks with the exception of her LW, which is remedied by having high crit rates.