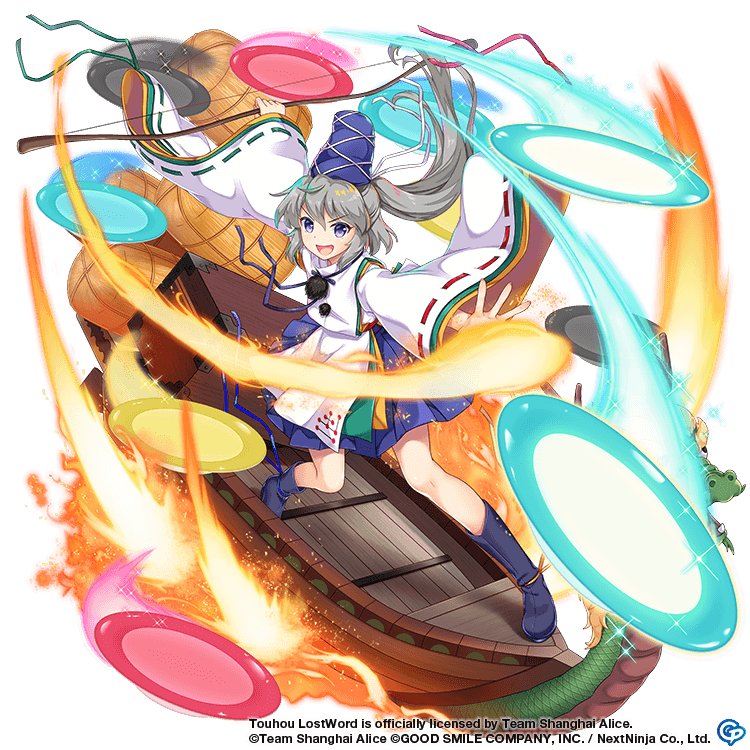 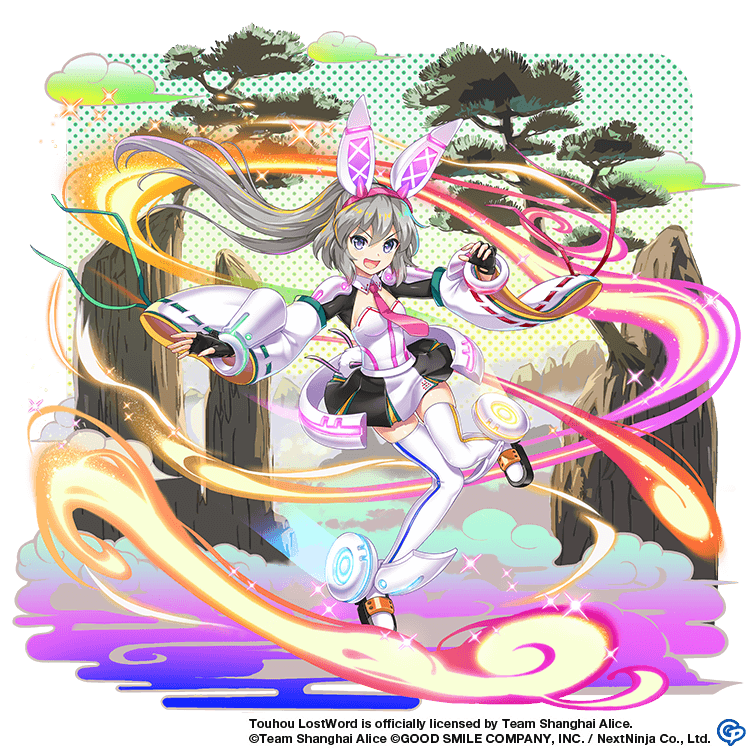 Mononobe no Futo's Spread Shot. She attacks with senjutsu said to have been passed down by a hermit and goddess of Taoism. Futo says she is still learning senjutsu, but she seems to be exceptionally skilled at fire senjutsu. However, this attack could also be a secret technique of the Mononobe clan merely disguised as senjutsu.
Standing Mountain

Mononobe no Futo's Focus Shot. She attacks with senjutsu said to have been passed down as a gift from an ancient emperor of China. Futo says she is still learning senjutsu, but it seems she can still use techniques like these that do not involve fire. Since she can manipulate the earth with this technique, maybe it could be used for urban development... Was this the reason why the onmyouji of the past learned onmyoudou? 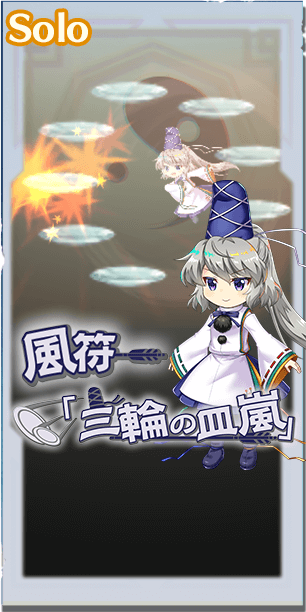 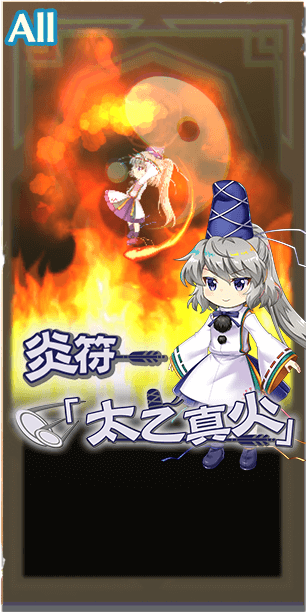 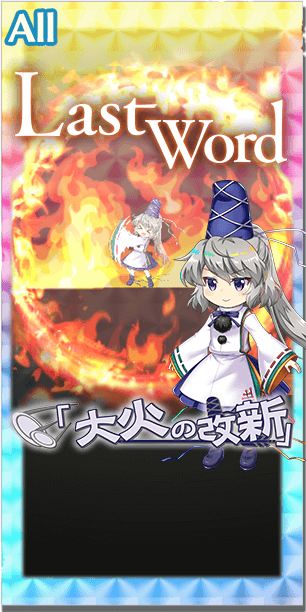 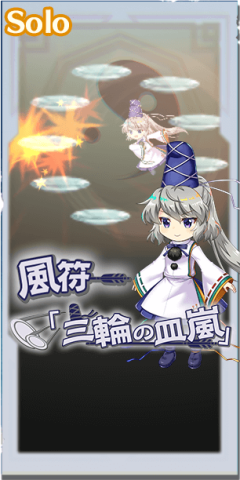 Mononobe no Futo's Spell Card. A whirlwind of plates surrounds her as she charges into her target. According to legend, the ancestor of the Mononobe clan, Ikagashikoo, offered plates to the gods. Also, Oomiwa Shrine on Mount Miwa, built by Ikagashikoo, is said to be the oldest Shinto shrine in Japan.
*Pre- and Post- effects assume max level. Effects per level can be viewed here.
Pre-Attack Spell Card Effects 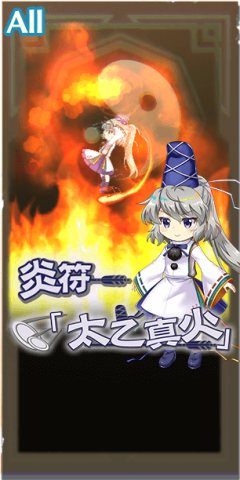 Mononobe no Futo's Spell Card. She attacks with fire that is most likely a product of senjutsu. Taiyi Zhenren, the preeminent god of Taoism, is known to possess an artifact of dragons called the Nine-Dragon Fire Net. This is a pretty amazing Spell Card if it is truly based on that artifact. However, it is concerning how little hesitation Futo has in regards to setting things aflame.
*Pre- and Post- effects assume max level. Effects per level can be viewed here.
Pre-Attack Spell Card Effects 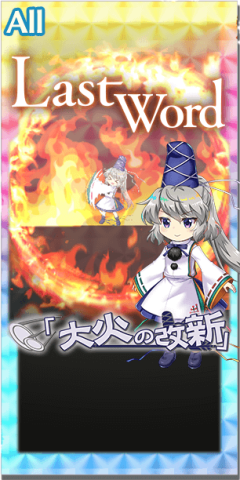 Mononobe no Futo's Last Word. She attacks with flames that burn so hot they could completely change an era. The Taika Reforms (inferno and Taika are homophones in Japanese) were a set of changes to the governmental structure in Japan that were supposedly enacted in the seventh century. The Mononobe clan and the Soga clan were fierce rivals. However, the Mononobe clan had already been destroyed by the Soga clan at this time, and the Soga Clan was eliminated during the Isshi Incident, which marked the beginning of the Taika Reforms. So the day when the Mononobe clan's grudge was settled was also the day that spelled the end of the age ruled by powerful clans.
*Pre- and Post- effects assume max level. Effects per level can be viewed here.
Pre-Attack Spell Card Effects

When using Graze, Own Agility 1 level UP (1 turn).
DMG from resisted elements 25% DOWN.

Mononobe no Futo was released on June 5th, 2022 in Festival: Wind of Faith & Mountain of Plates.

Mononobe no Futo is a Taoist hermit, specifically a Shikaisen, who serves under Toyosatomimi no Miko and lives in the Divine Spirit Mausoleum with her and the other Taoists in Gensokyo. Unlike the other very old Taoists that Futo was resurrected alongside in Touhou 13: Ten Desires, such as Miko and Tojiko, Futo didn't really catch up with the times, and often uses antiquated language that confuses the present day Gensokyo residents, misunderstands present day language herself, and generally has a carefree attitude. Her ability, "to manipulate feng shui", is something of a way to manipulate the qi of fixed areas like buildings or shrines to invite fortune upon those who enter them. Futo spends most of her time maintaining her hermit status by practicing Taoism with Miko and the others. In LostWord, she stays close to Miko in terms of status as an A+ Tier Friend.

In terms of raw damage and power, Futo can do rather well with her Yang-only Last Word, Inferno Reformation. A Last Word with only Energy bullets can easily be supported by story cards nowadays, and Futo comes with her own 2 levels of Accuracy UP via her third skill, Dunjia Divination, to make sure she can concentrate her story card buffs elsewhere. Combined with a decent amount of Yang ATK UP (3 levels from Dunjia Divination and 3 more upon activating Inferno Reformation) and even some decent Slice scaling to take advantage of her Agility buffs, Futo can definitely be a good damage dealer upon setting up.

As for what else Futo offers, her gameplan is rather straightforward: heavy Agility buffs mixed in with some elemental breaking. Her elemental breaks are strangely hit and miss. While she does have 0P breaks on both shots, Fire on her Spread shot, Liuren Holy Fire, and Earth on her Focus shot, Standing Mountain, the rest of her breaks aren’t the best. Her first spell, Wind Sign: Miwa Plate Storm, is a mix of four different elements, which makes it inconvenient for Full Breaks, whereas her second spell, Blaze Sign: Taiyi True Fire, is only 2 Fire breaks and 1 Star break, though they are at least all accessible at 1P. Inferno Reformation is at least a nice mix of 4 Fire breaks and 2 Star breaks, but you wouldn’t really want to use a Last Word for breaking unless it’s a finishing hit.

When it comes to her skills, Futo is really a selfish buffer that is trying her hardest to be a hard-hitter. Her first skill, Nigihayahi Blessing, and her second skill, Bowyer’s Blood, provide 2 levels of Agility UP each to help with Slice scaling, with Bowyer’s Blood being a teamwide buff. Futo’s only other teamwide buff is the Accuracy UP from Dunjia Divination, which is nice, but not the greatest if other teammates come with their own accuracy support. Bowyer’s Blood also has the benefit of granting Futo 1.00 Spirit Power, which she can put into an early 2P Inferno Reformation or other general power.

One other major flaw of Futo is her durability. WIth a low HP stat and even lower defensive ones, it may be wise to make sure the Taoist doesn’t find herself dead before contributing much to the party. Still, where Futo may not offer much outside of her high damage, she at least does this does well while having a slight niche in Fire breaking. Bring Futo along, and maybe burn down an enemy stronghold or two if you get the chance.

The secondary effects and scalings of Futo’s attacks are as follows:

The Witch of Scarlet Dreams is just too good to not recommend, providing a heavy amount of Spirit Power while even raising Yang ATK, which Futo uses entirely for her Last Word. From there, you can try focusing on raising Futo’s Yang ATK a bit higher via buffs, as she only does so with 6 levels by herself. Two recommendations are How Irrational…, a 3-level buff while also raising Yang ATK a decent amount as a stat stick, and Waiting in Comfort, a Yang ATK UP card that also gives a Yang DEF buff to make Futo perhaps a little less squishy.

Futo’s Last Word is entirely made up of Energy bullets, so the most obvious way to buff its damage will be from Energy Bullet power UP cards. Unknown Barrier Team is the immediate candidate for this, both being a farmable story card in 3-18-3 as well as being a 50% buff to the entire attack. Even with a pointless Yin ATK buff, that percentage is too great to pass up. Worlds in Hand might do okay as well due to buffing Fire damage, something Futo’s Last Word has a bit of as well, but the numbers will obviously not be as high. The teamwide CRIT ATK buff may be nice for the rest of the party, though.

Dunjia Divination should be prioritized first due to providing an extra ensured level of Agility and Yang ATK UP upon maxing out, something that will definitely help Futo’s damage in the long run. Bowyer’s Blood may seem more appealing to max out at first due to allowing Futo to get to 2P turn 1, but she doesn’t have anything super special to max out with that extra power, making her third skill a better start. Nigihayahi Blessing should definitely be maxed, although it will be helpful since it gives Futo 2 levels of Agility UP basically permanently due to a 3 turn cooldown.

+ 0P Fire and Earth on basic shots
+ Can get good damage off of her Yang-only Last Word
+ Good amount of Agility buffs from whole kit; helps Slice scaling