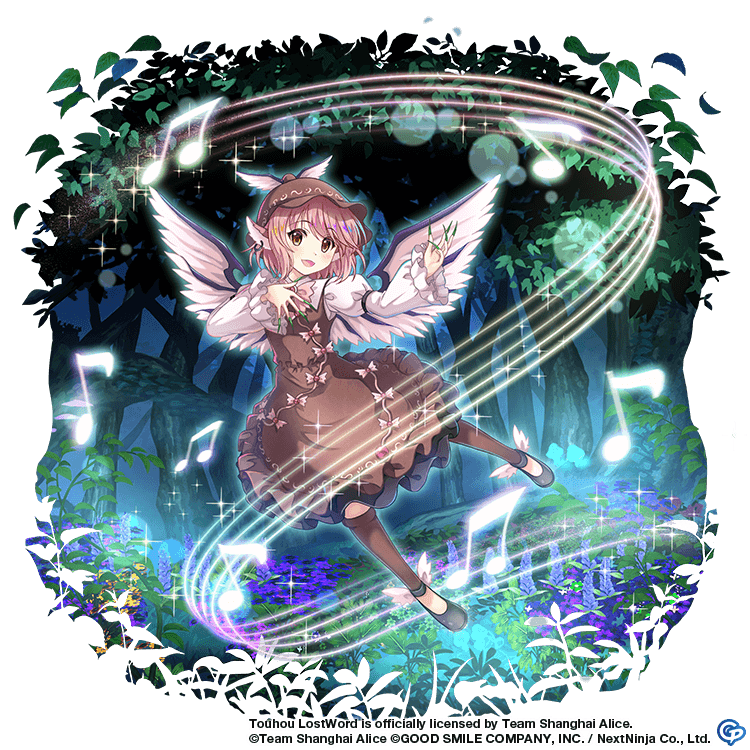 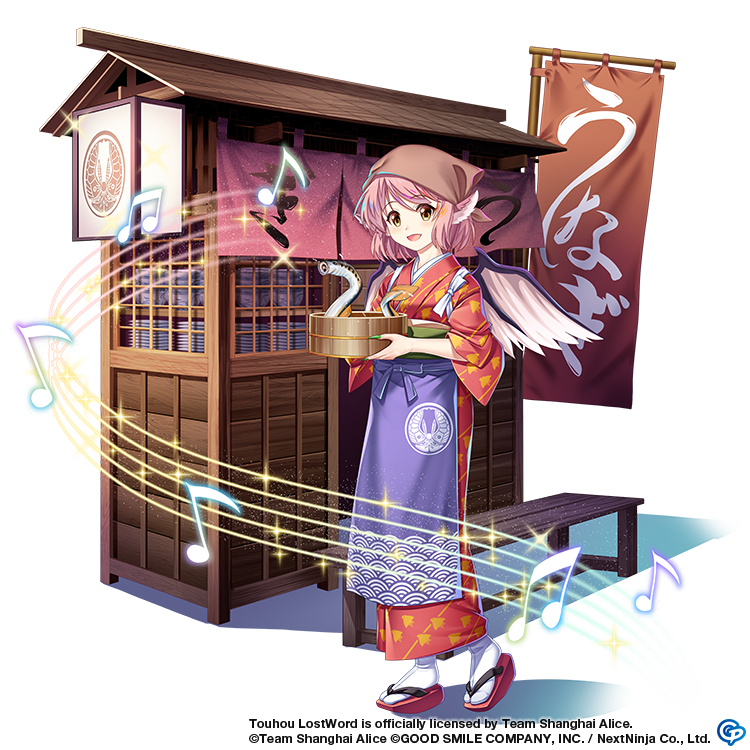 Mystia Lorelei's Spread Shot (a Touhou LW original). She attacks by firing moth scales. It is said that some of the youkai birds called night sparrows have the appearance of a butterfly or moth instead of a bird. Also, moth scales aren't toxic, but the larval forms of some moths are covered in venomous spines.
Nightjar Song

Mystia Lorelei's Focus Shot (a Touhou LW original). She attacks with her singing voice that she is so proud of. Nightjars, also known as nighthawks, are a family of nocturnal birds. Also, soba stalls that are set up at night are sometimes called nightjar soba because they attract customers by singing songs. 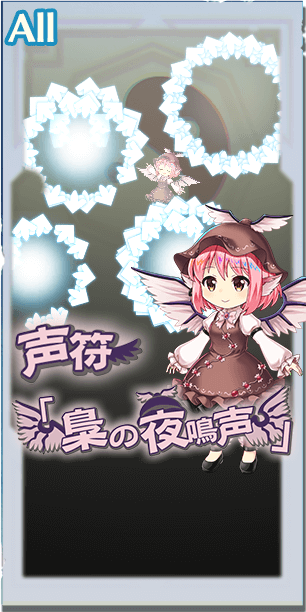 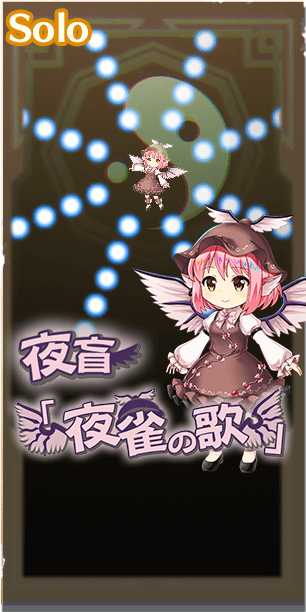 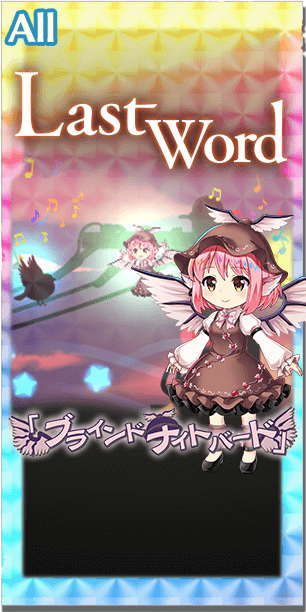 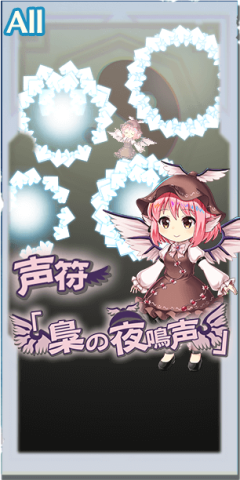 Mystia Lorelei's Spell Card. She attacks by hooting like an owl. Owls are carnivorous birds of prey and the most well-known nocturnal birds. Their unique cry sounds ominous if you hear it while walking outdoors at night. In Japan and China, owls were apparently called unfilial birds because it was believed that owl chicks ate their own mother.
*Pre- and Post- effects assume max level. Effects per level can be viewed here.
Pre-Attack Spell Card Effects 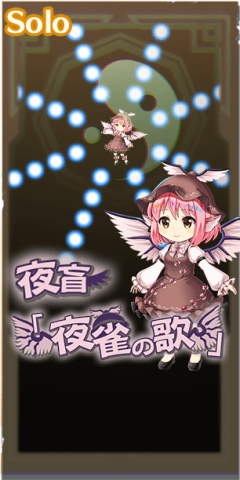 Mystia Lorelei's Spell Card. She shows off her signature technique as a night sparrow. Inflicting people with night-blindness is the most distinguishing characteristic of night sparrows. Lampreys have long been known as a cure for night-blindness since ancient times, and there is even scientific evidence that supports this. Mystia runs a lamprey stand as a part of her campaign to eliminate the consumption of yakitori (grilled chicken on sticks)... However, it is not known how effective this tactic has been at reducing the popularity of the yakitori stands.
*Pre- and Post- effects assume max level. Effects per level can be viewed here.
Pre-Attack Spell Card Effects 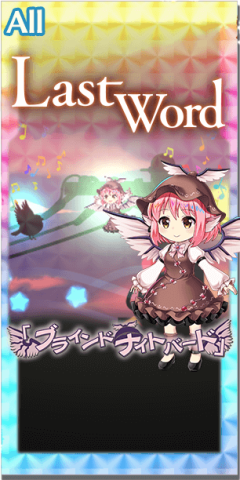 Mystia Lorelei's Last Word. Mystia displays her full power as a night sparrow in this attack. You could say that she causes the night to descend along with a rain of bullets. The coming of night marks the beginning of the time of the youkai. This boundary is dusk, a time when vision is obscured, and it is hard to identify one person from another. Dusk is also known as oumagatoki in Japanese, the time when you encounter monsters. When night comes, Mystia probably sings in joy, sets up her stand, and prepares to assault humans.
*Pre- and Post- effects assume max level. Effects per level can be viewed here.
Pre-Attack Spell Card Effects

DMG to effective elements 20% UP.
When using Graze, party's Accuracy 1 level UP (1 turn).

Like any other common youkai, Mystia Lorelei spends most of her time attempting to terrify the locals in the human village via her song that can cause confusion. She is more nocturnal, hiding in the day and at night scaring humans through her songs as well as inflicting them with night-blindness. This does not mean she has other hobbies on the side, though, as she can also be found running a grilled lamprey stand in hopes to counter the sales of yakitori, or grilled chicken. Later on, she put her voice to more use and started the punk-rock band Choujuu Gigaku alongside Kyouko Kasodani. Her range of voice is almost as high as her range of talents, something that is rather impressive for smaller youkai. Thanks to that, Mystia obtains the decent rank of A+ Tier in Touhou LostWord.

Mystia comes with a lot of her own tools to assist in performing large damage. Her Last Word, Blind Nightbird, is both Energy-only and has a somewhat frontloaded spread at 2-2-1, making her immediate damage somewhat high. Something that also assists this quick damage is her third skill, Black Butterfly, which grants herself 2 levels of Yin ATK UP (2T) to stack with the 2 levels of Yin ATK UP (3T) she also gets when starting her Last Word. While she does come with her own Accuracy buffs thanks to every Graze she performs on a turn, this cannot save her from her main issue of being Spirit Power-hungry. Not only would she want to be at 3P to make Blind Nightbird as strong as it can be, but the Blind anomaly breaks on her second spell, Night-Blindness: Song of the Night Sparrow, are only found at 3P of the attack. It’s not an issue that the usual great story cards cannot fix, but Mystia will definitely have to set up slower due to having no Spirit Power restoration of her own.

When it comes to what else Mystia offers, she is primarily a debuffer. Granted, not all of the debuffs she will apply are extremely useful in most situations. While decreasing foes’ Accuracy with her first spell, Vocal Sign: Hooting in the Night, and her first skill, Okuri-Suzume, is very in-character, the only time this will be relevant is if you are just trying to evade the foes’ attacks. The 3 levels of Yin ATK DOWN (3T) is also very situational, only coming into play if you are trying to heavily defend against a foe or attempting to stall out a foe. One debuff that is truly worth it, though, is her second skill, Tamoto-Suzume, which decreases all opponents’ Yin DEF by 2 levels (3T), something that any Yin nuke can take advantage of. Additionally, Tamoto-Suzume provides Mystia with self-Quick, something she can take advantage of when using Night-Blindness: Song of the Night Sparrow. It applies 3 layers of Blind onto a singular target, and can even break these anomalies at the same time if the spell is fully boosted at 3P. Black Butterfly can also apply Blind on all foes, 2 layers to be exact, which means that Mystia can get up to 5 anomaly breaks on a singular opponent in 1 turn!

Mystia’s other barrier breaks are nothing to scoff at either, as she has somewhat above-average elemental breaks in terms of General Friends. The highlight is definitely her Spread shot, Moth Scales, and her 0P Moon shot that hits all of the enemies for easy, spammable Moon breaks. After that, Mystia’s spells are a rather basic mix of Moon and Wood, but without confusing one over the other, she can be a decent breaker in either element. Vocal Sign: Hooting in the Night has 3 Wood breaks and 1 Moon break, Night-Blindness: Song of the Night Sparrow contains 2 Wood and 2 Moon, and Blind Nightbird is an even mix of 3 Wood and 3 Moon. She might not specialize in one or the other, but she at least does not have the issue of being confused over having “rainbow breaks” like some other Friends do.

In the end, Mystia is a General Friend with a decent amount of practical applications thanks to her Yin debuffs, Accuracy support, and fair nuking and break potential. She does lack a few key elements to make a great Friend, such as needing a lot more practical debuffs and lacking Spirit Power restoration to get to the best parts of her kit, but what she is able to provide is still very helpful for most teams, especially those with Yin attackers. When you hear a suspicious song in the night, just be aware of its effects and this night sparrow will go a long way!

Mystia really lacks her own Spirit Power restoration, meaning that she really wants to get use out of cards such as The Witch of Scarlet Dreams and Midnight Tea in order to get to her best attacks faster. The latter, Midnight Tea, has an additional benefit of having better Yin ATK stat sticks. Outside of this, you can stick on some Yin ATK buffs to make sure Mystia hits extra hard with her Last Word, with cards such as Overwhelming Firepower working perfectly.

All Energy Last Word, 50% Energy Bullet buff from Unknown Barrier Team is all you really need to know regarding why this is the Best in Slot. It even has a Yin ATK buff of 2 levels if you were that unsure about using it. If you are lacking this card, you can try a mix of other Energy Bullet cards, such as Thunder Beat and Protection of Cerpinus.

Black Butterfly, or Mystia’s third skill, is definitely a great start for her skill leveling, as it grants her an extra Yin ATK level for better nuking as well as another Blind anomaly on all foes, which can allow herself and other anomaly breakers to get more barrier breaks. Next, you can level up her second skill, Tamoto-Suzume, thanks to it being her best debuff in Yin DEF, which any Yin-based attacker can also take advantage of. Okuri-Suzume is honestly not worth leveling unless you really want to mess with enemies and figuratively blind them with Accuracy DOWN while dodging with self-Evasion UP.