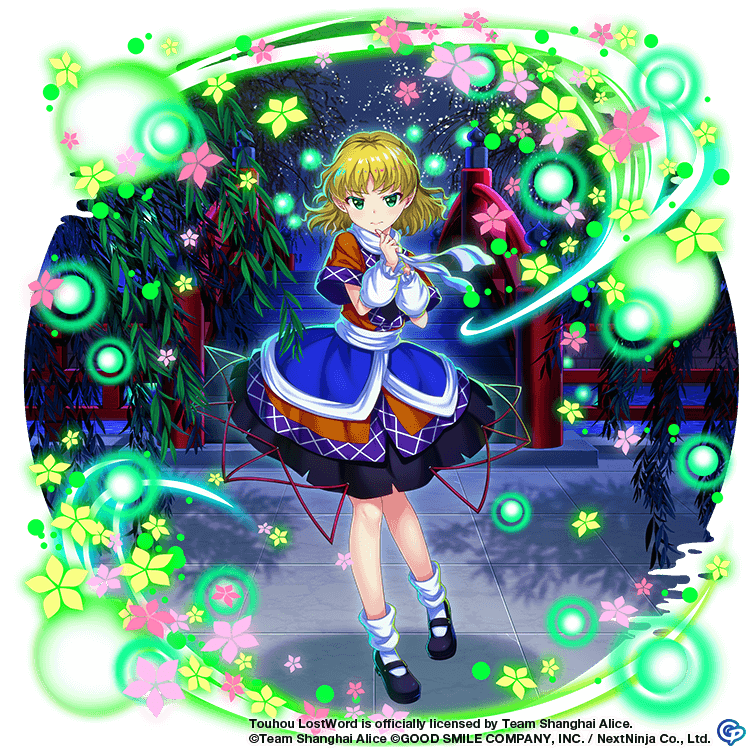 The Jealousy Beneath the Earth's Crust

Parsee Mizuhashi's Spread Shot (a Touhou LW original). She shoots lots of ice nails in this attack. According to the teachings of a foreign country in the west, those who commit the sin of treachery are said to be sent to an ice Hell of extreme cold. An icy Hell sounds more painful than a burning one...!
Uji Bridge Burning

Parsee Mizuhashi's Focus Shot (a Touhou LW original). An attack that knocks her target over by destroying the bridge they stand on. Building bridges over rivers has been an important business since long ago, and when someone builds a bridge, they pray to a water god. Bridges are also structures that allow people to cross boundaries, establishing communication with the other side of a river. The reason why gods who protect bridges can also offer blessings to cut unwanted ties with people (burn bridges) may be related to such ancient beliefs and views. 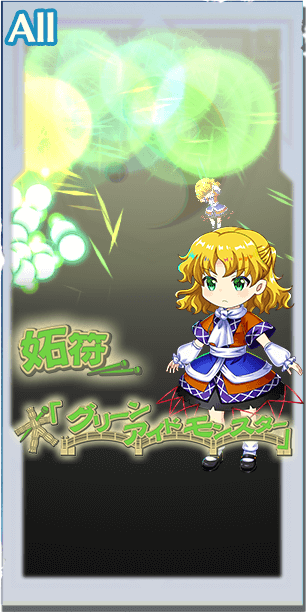 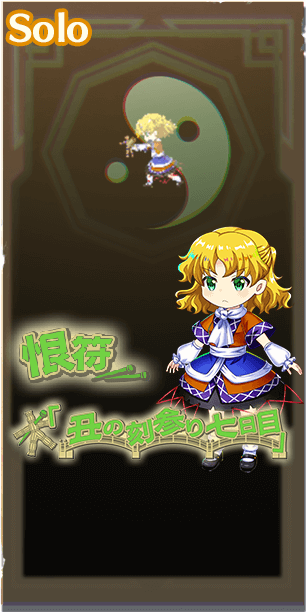 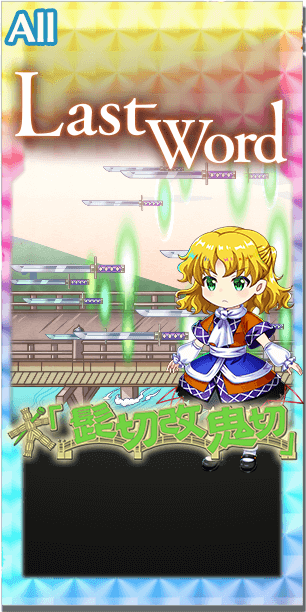 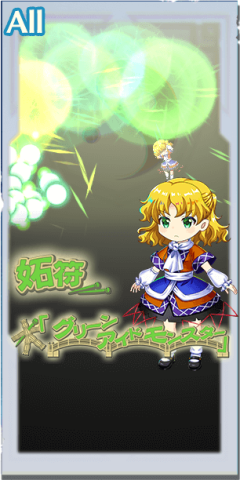 Parsee Mizuhashi's Spell Card. An attack where she shoots green lights shaped like eyes. A playwright from the west is said to have described jealousy as the green-eyed monster. This probably resulted in the term ''green-eyed'' becoming synonymous with jealousy. Monsters are always lurking in our hearts.
*Pre- and Post- effects assume max level. Effects per level can be viewed here.
Pre-Attack Spell Card Effects

All targets' Evasion 3 level(s) DOWN (3 turns). [Additional effect +1 with success rate 50%.]
Post-Attack Spell Card Effects
None
Malice Sign: Day 7 of the Shrine Visits in the Dead of Night 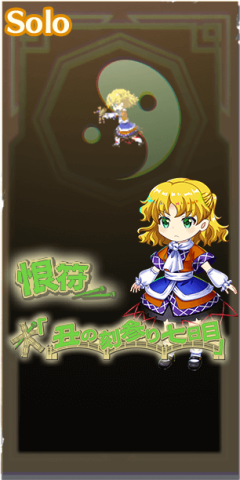 Parsee Mizuhashi's Spell Card. She shoots long nails in this attack. Although, it is more like she hammers the nails rather than shoots them. This may be the right way to get rid of a grudge. Visiting a shrine at the Hour of the Ox (between 1-3 A.M.) to hammer long nails into a straw doll multiple nights in a row is a well-known curse ritual in Japan, but few people know how to perform it correctly. Even if you do happen to learn it, you should never perform this ritual unless you want to become an oni yourself. Curses, like chickens, come home to roost.
*Pre- and Post- effects assume max level. Effects per level can be viewed here.
Pre-Attack Spell Card Effects 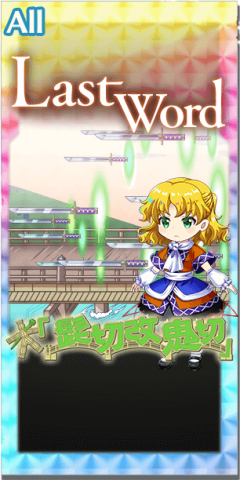 Parsee Mizuhashi's Last Word (a Touhou LW original). This attack replicates a legendary sword that supposedly cut off the hashihime of Uji's arm. It is believed that the sword was originally named Higekiri, but the name was later changed to Onimaru, Shishinoko, Tomogiri, and back to Onimaru again. This sword is a pair to Hizamaru (also called Kumogiri, Hoemaru, and Usumidori). They are like friends and brothers. Perhaps due to the influence of a certain ancient piece of literature, this sword is often thought to be the same sword as Onikiri (also called Onikirimaru or Onikiri-Yasutsuna).
*Pre- and Post- effects assume max level. Effects per level can be viewed here.
Pre-Attack Spell Card Effects

Parsee Mizuhashi is a "Hashihime", which translated literally from Japanese means "Bridge Princess". Generally, they guard bridges and occasionally attack those who attempt to cross their bridge, especially those in the form of a couple, as they are intensely jealous beings. Parsee is not much different, as she guards the bridge to Former Hell, and attacks the pair who attempts to cross it in the events of Touhou 11: Subterranean Animism. But aside from just being horribly jealous herself, Parsee's ability, "to manipulate jealousy", allows her to make others jealous too; and manipulating emotions is a truly troublesome power (it's likely why she was sealed in Former Hell). In Lost Word, Parsee makes use of her bridge guarding experience and joins our group as an S+ Tier Friend.

Parsee is an above average Yin attacker for a general pool friend, with an impressive suite of AoE and single target debuffs including AoE Dodge down, AoE Crit DEF down, and lots of Yin DEF down across Shots and Spell Cards, not to mention her boost effect is party-wide Yin ATK UP. Her Shots and Spell Cards aren't especially front or backloaded, making her good for average length fights, but not especially unsuited for long fights either. Her Skill 2, Jealousy Supply, boosts her Spirit P by 1.5, allowing her to reach most of her bullet lines on turn 1, making her turn 1 damage (and therefore farming) not half bad either.

Aside from being plenty good at farming with her more than sufficient turn 1 damage, Parsee really doesn't have much trouble fitting into high level content Yin-based teams either. Her selection of debuffs and buffs are universally useful, and most of them are level 3s that last 3 turns, which is about as good as it gets outside of obviously overpowered Friends like Epics, who have access to 4 turn buffs/debuffs. Not to mention Parsee's element density is pretty much on current day Festival Friend level, with even her Shots having lots of element access, so she's helpful with barrier breaking as well. Her weaknesses are few, outside of relative frailness (which isn't exactly uncommon for damage-focused Friends), and her synergies are many.

Worlds in Hand is a great choice for Parsee, as the party-wide Crit ATK UP it supplies compliments her personal Crit DEF DOWN, plus the card has plenty of Yin ATK. Anniversary at the SDM is another solid choice for her, as it supplies Yin debuffs which are similarly good like the Crit ones, and this card also has lots of Yin ATK. Overwhelming Firepower doesn't do any debuffing, but it also has plenty of Yin ATK and is easier to get as a budget choice.

Behind the Bullets: Reimu is simply Parsee's highest damage Story Card by a decent margin, however it is difficult to get, especially multiple MLB copies of. Anniversary at the SDM is a fine second choice if you don't have it in the filler slots instead, as its effects are very serviceable for any part of Parsee's kit. Mysterious Sword Master is Parsee's best farmable card choice, as it buffs her slash bullets heavily and also has a lot of Yin ATK.

Parsee's Skill 1, Doll Prayer, is simply too valuable to pass up first; All targets' CRIT DEF 3 levels DOWN is an incredibly helpful debuff not only for Parsee herself but also the rest of the team, and gives Parsee herself a few levels of Accuracy for consistent damage, plus it's tied with Skill 3 for the lowest cooldown. Skill 2, Jealousy Supply, comes in at a close second due to the ever usefulness of Spirit P boosting effects, plus Charge allowing Parsee to move last and collect buffs from allies before attacking. Skill 3, Water God's Obstacle, can safely be leveled last, as although Own Yin ATK 3 levels UP is always a good effect, it only helps Parsee herself, and Inflicts 2 layer(s) of Barrier Status: Freeze to all targets is good too, it's a little more niche and isn't as universally helpful to teams as CRIT DEF down.

- Limited team support.
- Yin DEF Debuff RNG on bullet lines is rendered not so reliable.
- Killer Range has a ceiling.