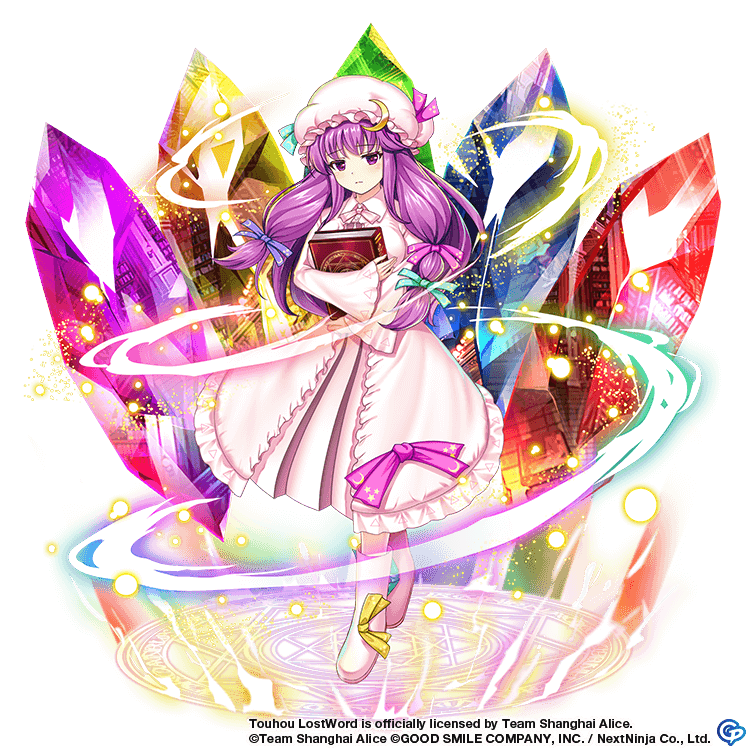 The Girl of Knowledge and Shade (Scarlet)

The Spread Shot of Patchouli Knowledge from the world shrouded in scarlet mist (a Touhou LW original). She shoots out hot lasers and orbs of moonlight. This attack utilizes dual-element magic with the unusual combination of fire and moon. She came up with this prototype magic during a conversation with Flandre.
Frozen Sun

The Focus Shot of Patchouli Knowledge from the world shrouded in scarlet mist (a Touhou LW original). She shoots out cold lasers and orbs of sunlight. This attack utilizes dual-element magic with the unusual combination of water and sun. She came up with this prototype magic during a conversation with Remilia. 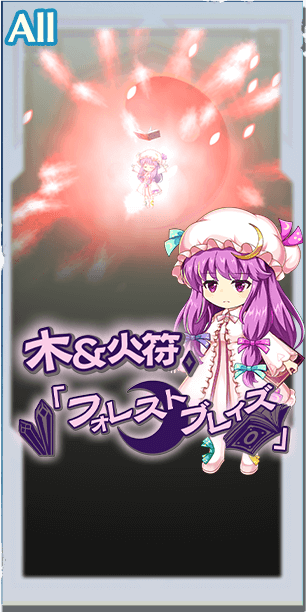 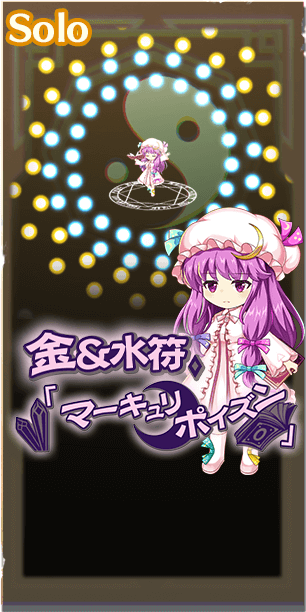 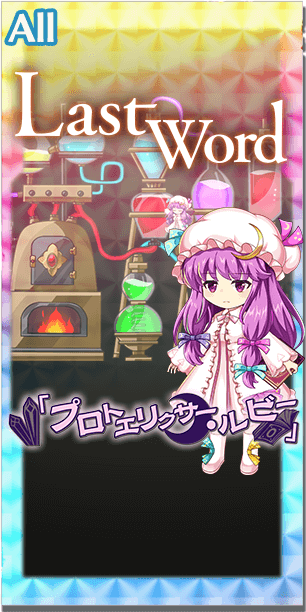 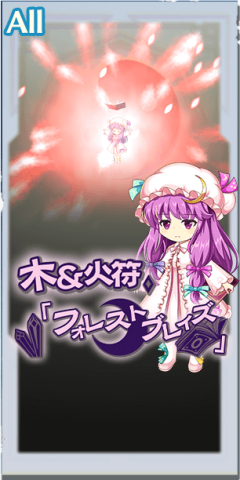 A Spell Card of Patchouli Knowledge from the world shrouded in scarlet mist. She attacks with wood and fire dual-element magic. While forest fires can occur as man-made disasters, they can also occur naturally. It is believed that they can be sparked by lightning strikes or the friction of dry leaves and branches. Humankind probably first learned to harness fire by seeing one of these naturally-caused forest fires. Forest blazes are the flames of wisdom that inspire young life (Wood Phase) to flourish (Fire Phase).
*Pre- and Post- effects assume max level. Effects per level can be viewed here.
Pre-Attack Spell Card Effects 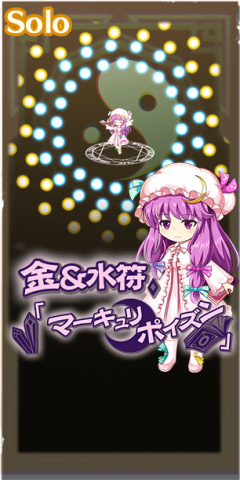 A Spell Card of Patchouli Knowledge from the world shrouded in scarlet mist. She attacks with metal and water dual-element magic. Alchemy was studied in the West and the East to try and unlock the secret of transforming life into the perfect state. One of the substances that attracted the attention of alchemists was a red mercury sulfide called cinnabar. It has been known since long ago that mercury can be produced from cinnabar. Mercury was thought to be the ideal substance or a necessary material to obtain the ideal substance because it flows like water, has a metallic texture, and can react with various chemical substances. Consequently, it was used in many different spells and experiments. However, not everyone knew that the substance was toxic.
*Pre- and Post- effects assume max level. Effects per level can be viewed here.
Pre-Attack Spell Card Effects 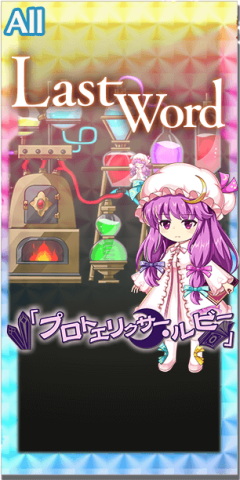 The Last Word of Patchouli Knowledge from the world shrouded in scarlet mist (a Touhou LW original). This attack creates a virtual manifestation of the Philosopher's Stone, the five-element ideal substance. While some believe that the Philosopher's Stone is cinnabar, others believe that the ultimate substance sought by Western alchemy and Chinese alchemy is a magical substance that elevates the imperfect reality of existence to an ideal. Idealization means transforming base metals into precious metals, inorganic matter into living matter, fools into sages, and mortals into immortals. The ideal for vampires like Remilia is to conquer sunlight, so perhaps the knowledgeable Patchouli believed that there was a substance that could be used to compensate for their weakness. Wasn't there an elixir that bestows true immortality somewhere?
*Pre- and Post- effects assume max level. Effects per level can be viewed here.
Pre-Attack Spell Card Effects

A6 Patchouli Knowledge  was released on July 19th, 2022 in Festival: Librarian of the Scarlet Night.

Patchouli Knowledge, like Alice Margatroid, is a youkai magician that has devoted herself to the studies of magic. While details of her upbringing and background are unclear, this has landed her as the librarian of the Scarlet Devil Mansion’s great library, putting the knowledge in her name to good use. While her wisdom is great, the same cannot be said about her health, as being exposed to so much magic has given her harsh asthma and has forced her to stay in her library to avoid the sunlight. This makes staying inside favorable to her, partially explaining why she was not shy to attempt to kick out the incident resolvers, Reimu Hakurei and Marisa Kirisame, during the Scarlet Mist Incident. She became somewhat more social after the incident was resolved, but due to coming from a Gensokyo where the incident has not been resolved yet, this Patchouli remains as an S+ Tier Friend.

For the purposes of purely dealing damage, Patchouli attempts to summon destruction with her Yin-only Last Word, Prototype Ruby Elixir. She buffs both her Yin ATK and CRIT ATK by 2 levels (3T) upon activating the attack, with a lot more Yin ATK UP coming from her second skill, Courageous Fire, which provides 3 levels of Yin ATK UP (3T). This prepares her well on the Yin-side of things, but her CRIT-based damage is a bit more problematic. She gets the very strong Human-Killer on Prototype Ruby Elixir, but she needs to be at 3P to access them, on an attack that is already backloaded with a 1-1-3 bullet line spread. Fortunately, her third skill, Robust Earth, attempts to mitigate this with an impressive 1.75 Spirit Power buff, putting her at 2.75 Spirit Power on turn 1.

Outside of the damage, Patchouli can use her magic for team support and special barrier breaks. Her skills are the main source of partywide buffs, such as her first skill, Mighty Wind, and its ability to buff the team’s CRIT Accuracy by 2 levels (3T). While CRIT Accuracy for other allies is somewhat more situational if said allies already ensure critical hits from Killer bullets, the increased CRIT chance can be used by Friends without that privilege. Thanks to her character ability, Capable of manipulating all elements except star, she can provide more CRIT Accuracy UP for every use of Graze. Courageous Fire has two other team support buffs, that being 2 levels of Yang ATK UP (3T) and 1 level of Accuracy UP (3T). While 1 level of increased Accuracy is low, the 3-turn endurance makes it a very practical support option for longer fights. Additionally, Patchouli’s second spell, Metal & Water Sign: Mercury Poison, drops a single target’s Evasion by 2 levels (3T) to provide even more indirect accuracy support. Last off, while not exactly team support, she can also cast self-Charge on herself by using Mighty Wind, which lets her synergize well with Friends that debuff while attacking, allowing Patchouli to sweep in after foes are weakened.

When it comes to barrier breaks, Patchouli is in a strange position, but not a bad one. The uncertainty mainly comes from her elemental breaking potential, as just like her base form, the magician focuses more on a variety of elements rather than specializing in one. She still gets a 0P break on a shot, particularly 0P Water on her Focus shot, Frozen Sun. However, the rest of her spells are a great mix of elements. Her first spell, Wood & Fire Sign: Forest Blaze, is 2 Fire and 2 Wood, Metal & Water Sign: Mercury Poison is 3 Water and 3 Metal, and Prototype Ruby Elixir is just a great mix of Fire, Earth, Metal, Water, and Wood. It’s not that her elemental breaks are bad, but you will be using them as a supportive role instead of being a primary elemental breaker. Instead, Patchouli is a great anomaly breaker, specifically regarding Burn and Poison. Wood & Fire Sign: Forest Blaze applies 3 layers of Burn on all foes, and when the spell is at 2P, will immediately break those 3 inflicted barriers. Metal & Water Sign: Mercury Poison is similar, instead applying 2 layers of Poison to one target and being able to break them at only 1P. If Patchouli wants, she can also just keep the spells at 0P to inflict the anomalies to serve as Yin debuffs (for Burn) or Yang debuffs (for Poison) as long as the inflicted barriers aren’t broken. This gives Patchouli great flexibility, especially for a Friend that would have some trouble Full Breaking foes without the anomaly breaks.

Overall, A6 Patchouli takes a slightly different approach from other A-Type Friends and keeps a somewhat similar role to her L1-self when it comes to elemental breaking. The main exception is, of course, a greater focus on CRIT-based destruction, team support, and even anomaly breaks. Is the lack of change between A6 Patchouli and L1 Patchouli a sign of how close the two are in mastering magic? Or did L1 Patchouli still not get as much time in the sun as she should have?

The Witch of Scarlet Dreams is practical for Patchouli so that she can consistently access the anomaly breaks on her normal spell cards, although other Spirit Power increase cards are fine in this slot as well. Otherwise, Patchouli wants to increase her Yin ATK, CRIT ATK, and CRIT Accuracy further. Overwhelming Firepower both increases her Yin ATK by 3 levels and gives a Yin ATK stat stick. The Surface Is So Fun! is good since it increases both CRIT ATK and CRIT Accuracy by 2 levels, which greatly helps Patchouli’s consistency.

Patchouli’s Last Word is fully made up of Light Bullets, making Puppeteer and Necromancer’s 50% buff to Light Bullets a very easy choice for this slot. Especially considering that the elements present on this Last Word are heavily mixed, you are better off either finding another Light Bullet buff or just boosting her Yin ATK for this slot.

While you would usually prefer to immediately level up the skill that provides a Friend Spirit Power, Patchouli can get away with upgrading other skills first due to the great amount of Spirit Power her third skill, Robust Earth, already provides. With that, her second skill, Courageous Fire, can be leveled up first to give Patchouli even more Yin ATK to buff her Last Word and provide other Friends more Yang ATK support. From there, Robust Earth can be leveled next to decrease the cooldown from 8 turns to 7 turns and provide 0.50 more Spirit Power. Her first skill, Mighty Wind, provides the least amount of benefits due to only giving 1 more level of CRIT Accuracy UP at max level, and therefore can be leveled up last.