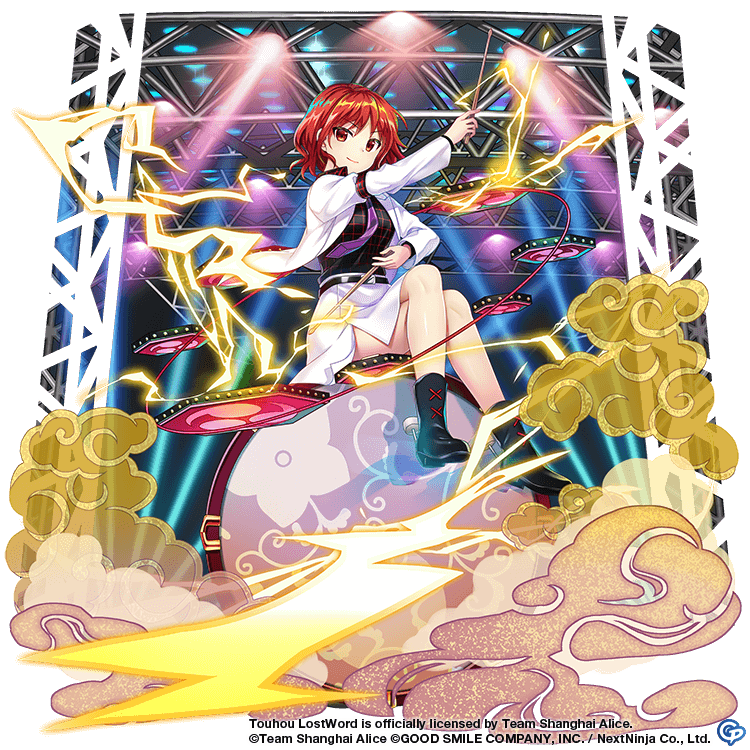 Raiko Horikawa's Spread Shot (a Touhou LW original). She attacks with her snare and hi-hat beats. The snare drum is a small drum with snare wires attached to the bottom head. A hi-hat is a combination of two small cymbals mounted on a stand, so they face each other. Raiko uses her lively rhythms to lead the whole band.
Tom-Tom & Bass

Raiko Horikawa's Focus Shot (a Touhou LW original). Tom-tom drums, or toms for short, are drums without snares. Raiko uses a high tom and a low tom. The bass drum is a large drum and is also known as a kick drum. Drum fills and grooves are really fun. 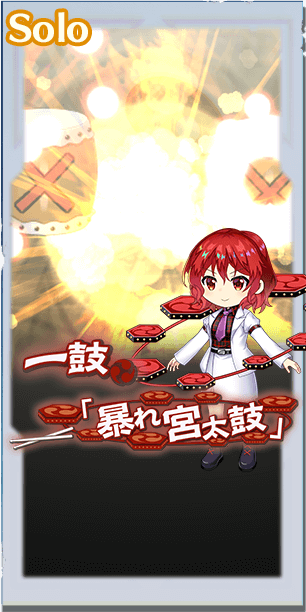 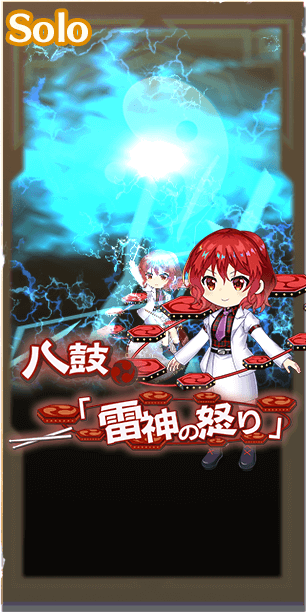 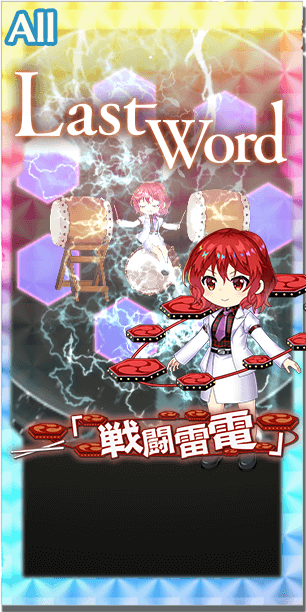 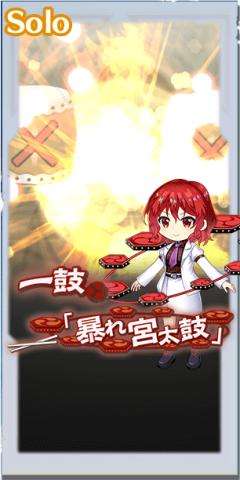 Raiko Horikawa's Spell Card. She shoots out drums that explode when destroyed. This time, she goes all out and triggers the drums herself. The miya-daiko, or temple taiko, is a type of large Japanese drum. They are played during Bon festival dances. Nagadou-daiko (long-barreled drums) get smaller whenever maintenance is performed on them, and the smaller nagadou-daiko are called miya-daiko.
*Pre- and Post- effects assume max level. Effects per level can be viewed here.
Pre-Attack Spell Card Effects 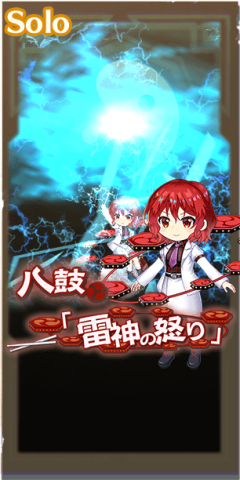 Raiko Horikawa's Spell Card. She shoots out a vortex of thunder and lightning. Gods of thunder are worshipped all over the world as gods that deliver divine punishment. In Japan, there is a famous legend about how a vengeful spirit who sought revenge was placated by being worshiped as a god. This spirit became Tenjin, a god of sky and storms. Apparently, Raijin, the Shinto god of thunder, is depicted with drums because of the influence of China's Leigong.
*Pre- and Post- effects assume max level. Effects per level can be viewed here.
Pre-Attack Spell Card Effects 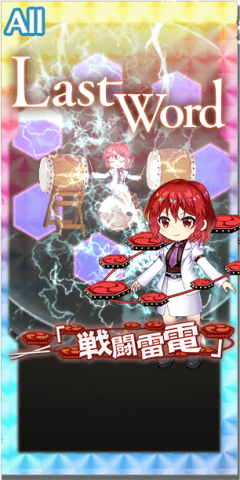 Raiko Horikawa's Last Word (a Touhou LW original). She shoots lightning lasers that writhe like serpents. Since antiquity, it has been thought that lightning is the incarnation of a god with a dragon-serpent body. Apparently, this was the same with the gods of thunder in China. This makes sense because when lightning instantaneously descends from the heavens, it looks like a snake lunging at its prey.
*Pre- and Post- effects assume max level. Effects per level can be viewed here.
Pre-Attack Spell Card Effects

Immune to Barrier Status: Paralyze.
When using Graze, own Agility 1 level UP (1 turn).

Raiko Horikawa was released on September 16th, 2022 in the Capsule-Crazy Gensokyo Pick-Up Prayer.

Raiko Horikawa is another among an increasingly large collection of tsukumogami; objects that have gained sentience 100 years since their conception. Like her sisters, she was given power from the Miracle Mallet wielded by Shinmyoumaru Sukuna. Instead of joining in the youkai rebellion however, she decides to trade in her traditional Taiko drum form with a modern drum set from the outside world, lending to the contemporary look she sports in Gensokyo today. This process involved the cleansing of her current self, removing all traces of the Miracle Mallet’s power and substituting it with a separate source. This creates a magical storm above the skies of Gensokyo, leading Reimu to confront her in an effort to resolve a possible incident. Making her appearance in Touhou Lost Word with an backbeat, she stands proud as an A+ Tier Friend.

These calmer times have seen her form a quartet with the Prismriver Sisters, spreading the joy of music to the residents of Gensokyo who happen to be present at one of their legendary performances. She is passionate about creating a paradise for other tsukumogami like herself to live freely in peace, though only time will tell what results her efforts will yield.

For farming, Raiko is fairly average across the board. With her Last Word, Thunder and Lightning of Battle, she is able to dish out good damage against enemies who are weak against Wood, especially in certain event stages. However, due to how current the story stages are constructed, Raiko can be heavily disadvantaged when it comes to farming multiple Story Cards due to her lack of elemental variance.

When facing challenging content, Raiko serves a more selfish role in the team rather than a helpful one. For example, her Skill 1, Backbeat, provides a decent speed and accuracy boost for multiple turns, however only to herself. This self-buffing theme is present throughout her Skill 2, Downbeat, providing only herself with a Spirt P boost and inflicting Electrified onto the enemy, and Skill 3, Blast Beat, boosting her own Yang Attack by 3 levels, but only giving her allies two levels of speed. While her skills boost her own damage output, they do almost nothing for her team. This trend follows through with all her Spell Cards as they also only provide self-buffs. Raiko’s first Spell Card, xxx, provides 2 levels of speed to herself, with her second Spell Card, Eighth Drum: Thunder God's Anger, following suit and buffing her own accuracy by 2 levels. Her Last Word, Thunder and Lightning of Battle, provides 3 levels of speed similar to her first Spell Card, and buffs her Yang Attack by 3 levels.

All in all, Raiko can deal a decent amount of wood breaks while dealing some decent damage towards enemies weak to the element. While she may not be able to reach the peaks that other characters may have, her electrifying performance is sure to leave a mark!

With Raiko, there are two ways to increase her damage. Either give her a multitude of Yang Attack buffs with her Story Cards, Spell Cards, and skills, or gain some extra Spirit P through the same methods to unleash a maxed out Last Word on her second turn. Thunder Beat and How Irrational… achieve similar results by giving Raiko a Wood power up or Wood and Yang Attack up allowing her to deal good damage with both her Spell Cards. The Witch of Scarlet Dreams allows Raiko, paired with Downbeat, her Skill 2, to build up Spirit P and finish her enemies off with 3P Last Word on turn 2.

It is recommended to first level up her Skill 2, Downbeat, first for the extra self P resulting in more bullet lines and damage. Assuming ideal Story Cards are equipped onto her Spell Cards, the next skill to upgrade would be Skill 1, Backbeat, for the extra accuracy to let her hit all the lines on her Last Word. The agility is just a nice bonus. Finally, her Skill 3, Blast Beat, should be levelled as it provides more Yang ATK for damage, as well as Agility to help support her slicing scaling.

+ Above average damage compared to other characters
+ Good access to Wood breaks, can easily full break anyone that has a Wood weakness
+ Spirit P self buff

- Being a General unit, her accessibility to high damage is outclassed by other Friends
- Very “selfish”. Most of her buffs from Skills and Spell Cards are self buffs
- Outside of event stages, the list of stages that can be farmed by Raiko is extremely limited