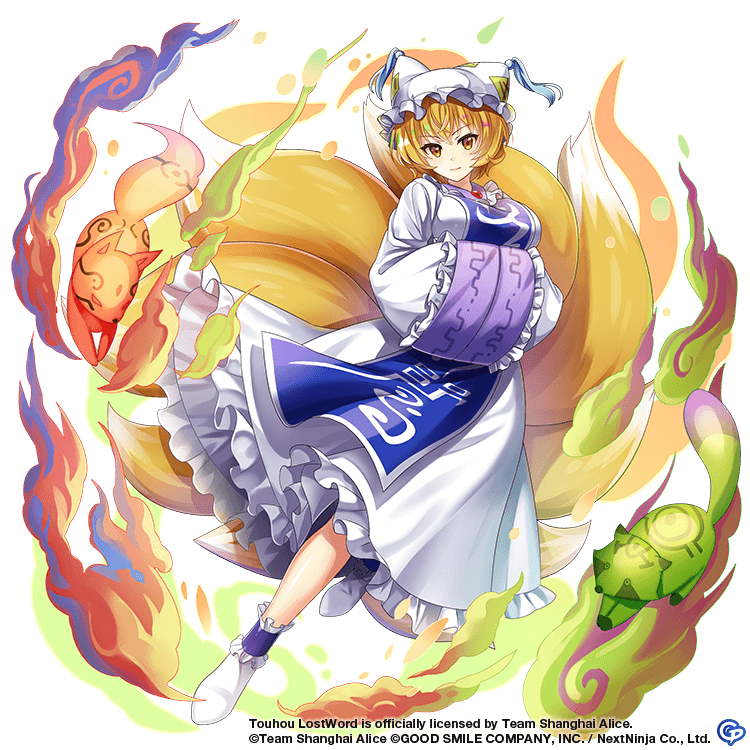 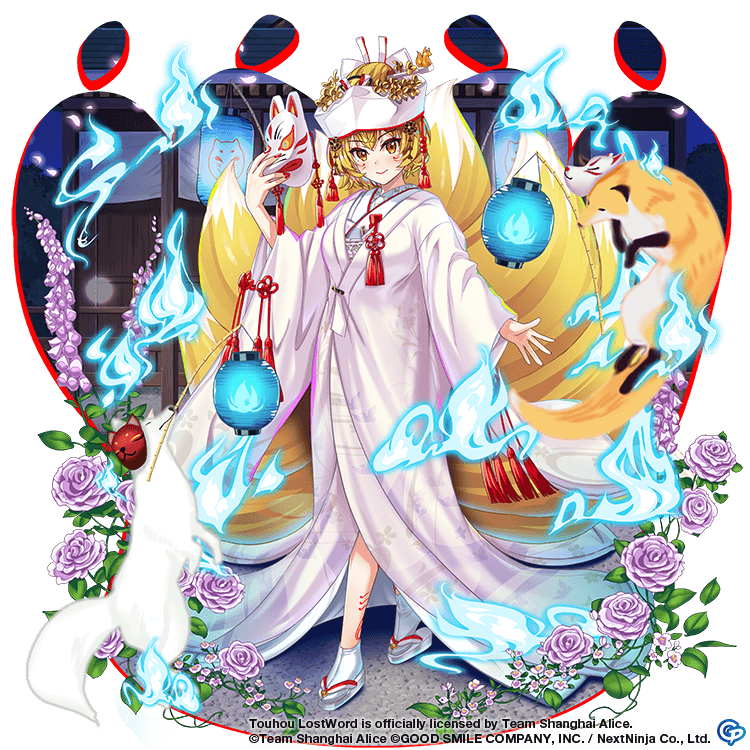 Shikigami of the Gap Youkai
White Youkai Flame in Procession

Ran Yakumo's Spread Shot (a Touhou LW original). After Yukari upgraded Ran, she gained the ability to use this attack which shoots out needles while rotating at a high speed. It looks like a pompom of yarn and is a secret favorite of Yukari's.
Sky Dragon Ascension

Ran Yakumo's Focus Shot (a Touhou LW original). This shot is based on Ran's Sly Youkai Laser. Yukari came up with the name with inspiration from a lengthy book. 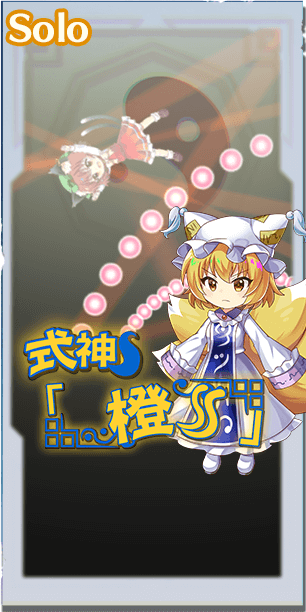 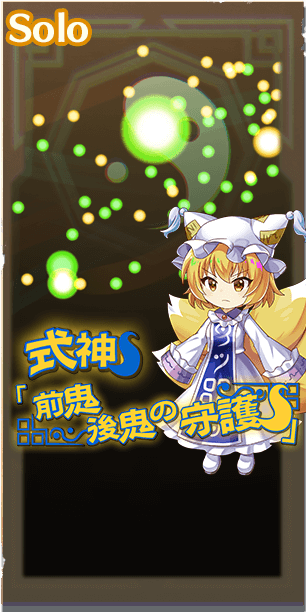 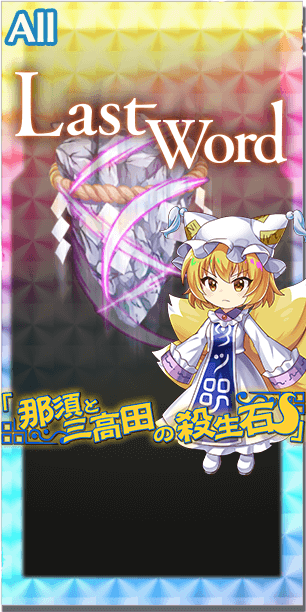 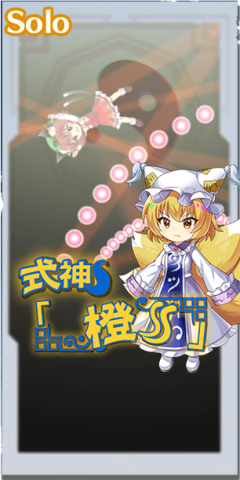 Ran Yakumo's Spell Card. She uses her own shikigami, Chen, in this attack. Chen is still inexperienced, so she does not move that intelligently, but this will surely become a more formidable attack in the future.
*Pre- and Post- effects assume max level. Effects per level can be viewed here.
Pre-Attack Spell Card Effects 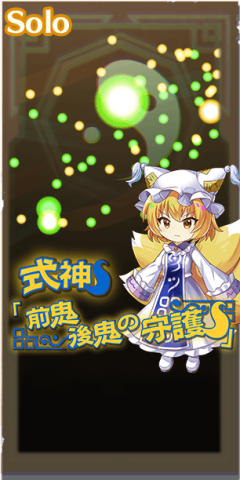 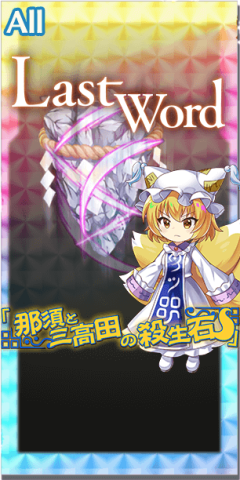 Ran Yakumo's Last Word (a Touhou LW original). It refers to a legend related to Tamamo-no-Mae, one of the most famous youkai. The pieces of the shattered killing stone are said to have become three different spirits.
*Pre- and Post- effects assume max level. Effects per level can be viewed here.
Pre-Attack Spell Card Effects

Ran Yakumo was released on May 11th, 2021 as part of the starting roster.

The shikigami of Yukari Yakumo, Ran Yakumo is a nine-tailed kitsune who sometimes forgets her place, thusly acting with more independence than one might expect. As a shikigami, Ran is not the kitsune she possesses, more akin to software installed upon it - though since the fox’s personality never surfaces, there’s no real problem with considering Ran as the body she inhabits. Outside of that, she has a fondness for tofu, and calculates various mathematical problems in her spare time, such as figuring out the width of the Sanzu River. Bringing a powerful All Last Word to the table, Ran has run the calculations, and her verdict is: she’s a A-Tier Friend.

Due to the sheer strength of her All Last Word at 1 Power, Ran is a top notch farmer, but runs into issues against bosses in one target stages. She can somewhat abuse the Earth element of her Last Word in such situations, but that does leave her notably behind in comparison to the competition - if you need to squeeze out additional damage output, remember that you can use Shikigami: Chen and then her Last Word equipped with a Heavy DMG UP Story card.

For difficult content, Ran has problems. Her Last Word still hits extremely hard even at 1 Power, but additional Power doesn’t scale it at all, leaving her somewhat outclassed by other attackers in longer fights. Additionally, she also has almost no Elements, having only Earth and only on her Last Word - whilst it can provide up to 4 All Earth breaks, with 3 of them coming with only one boost, using it in this fashion will sacrifice a large amount of her damage. She has some Accuracy support for utility, but it is difficult to make use of as it is on a Spell Card with no elements, on a somewhat middling speed unit. But she at least has Charge, making her easy to support, and her Last Word still hits so hard it’s well worth bringing her to harder fights.

Overall, Ran’s a very strong farmer, and no slouch in harder fights either. Just don’t expect her to do anything except damage, or 3 to 4 All Earth breaks if you desperately need them.

Garden of the Sun

Ran’s Spell Card slots should pretty much only be used for stat sticks, with anything providing YANG ATK being preferred. The reason for this is due to her kit easily giving her 10 YANG ATK UP for her Last Word, not to mention that her spellcards are lackluster in damage and contains no elements at all. The Story Cards listed here are simply the highest Yang ATK stat sticks for each card rarity - anything with YANG ATK on it will suffice.

Due to Ran already bolstering herself with 10 YANG ATK UP, and having no built in Accuracy buffs, she wants a story card with at least 2 Levels of Accuracy Up. Froggy Hat is perfect for this as on top of giving 2 ACC UP, it also gives her 20% Liquid Bullet UP - whilst few of the Bullets on her Last Word are tagged with Liquid, it’s the best she can do.

If you got her accuracy covered, consider buffing her elemental and bullet type factors instead. Dropping Keystones is perfect for this as it gives most of her attacks a 60% boost (30% Earth + 30% Heavy Bullet). An alternative would be using Secret God of the Sky which gives a 50% boost to her damage potential.

First, level up Work of a Nine-Tailed Kitsune to level 9, as it gains 2 additional levels of Yang ATK UP at that point, with level 10 only reducing cooldown. After that, level up Shikigami Service to 10, for the additional level of Yang ATK UP. Youkai Power Focus works just fine at 1, so you can save leveling it up until she gets a Fantasy Rebirth.

- Last Word barely scales with Power
- All of her Earth is on her Last Word, meaning damage must be sacrificed to use it for breaking purposes
- Last Word can struggle against Earth-resistant enemies, due to a abundance of Earth bullets
- Selfish buffer