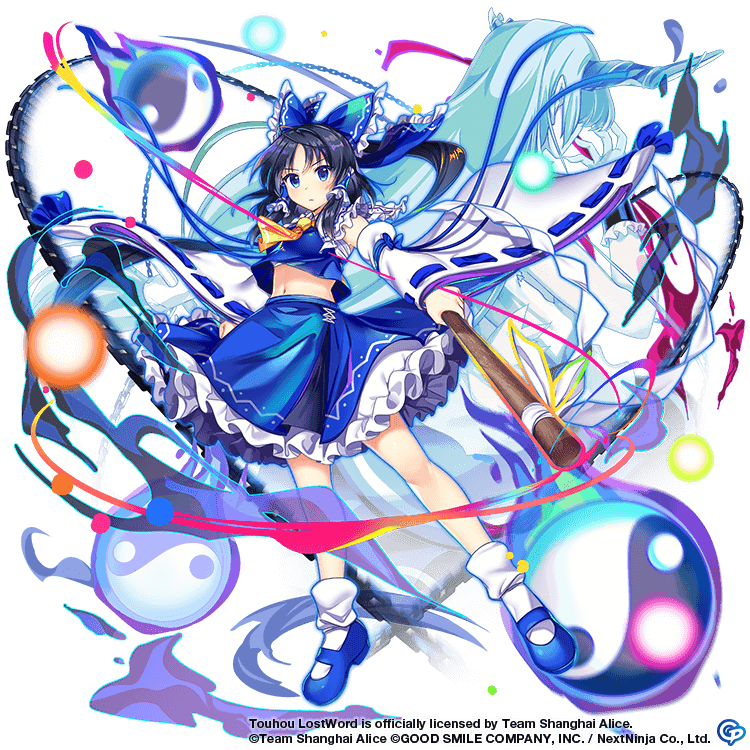 The Spread Shot of Reimu Hakurei, who travels between worlds. She attacks with her sentient purification rod. The purification rod was temporarily bewitched during a certain incident, but it seems to have changed for good when this Reimu became a god-summoning medium. It is similar to a tsukumogami in that it has a will of its own, but it cannot talk. This sturdy oonusa has seen an awful lot of use.
Extermination

The Focus Shot of Reimu Hakurei, who travels between worlds. In this attack, she eliminates beings that pose a threat to humans. The Reimu of our world also makes a living by exterminating youkai, but it seems this Reimu treats it more like a serious job. Our Reimu also has a straightforward and honest personality, and she doesn't hold grudges for long, whereas this Reimu appears to be obsessed with exterminating her enemies. 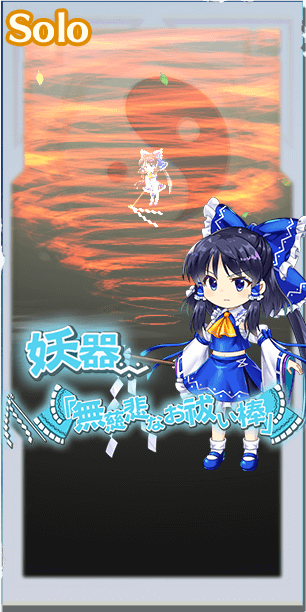 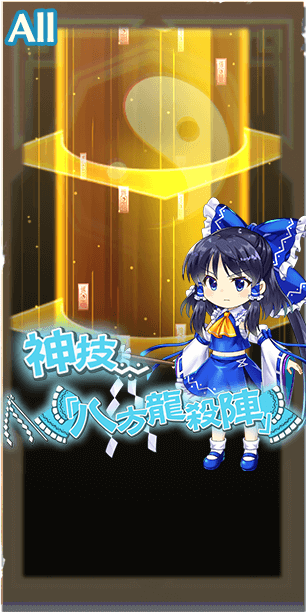 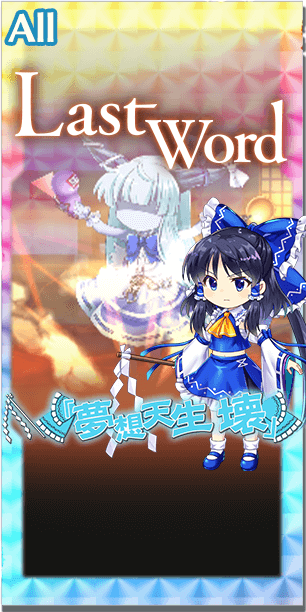 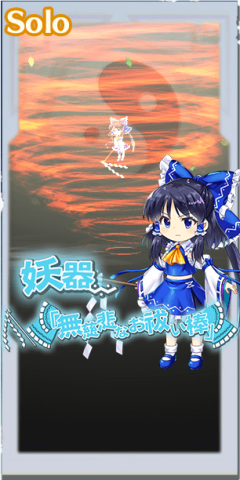 A Spell Card of Reimu Hakurei, who travels between worlds. She uses her purification rod, which is now sentient, to release a storm of spirit power. The Reimu of this world can also fight with Yin-Yang Orbs, ofuda, and needles. But she mainly uses her purification rod in actual battle. In fact, she seems to actively avoid using her Yin-Yang Orbs. Perhaps there is a reason for this...
*Pre- and Post- effects assume max level. Effects per level can be viewed here.
Pre-Attack Spell Card Effects 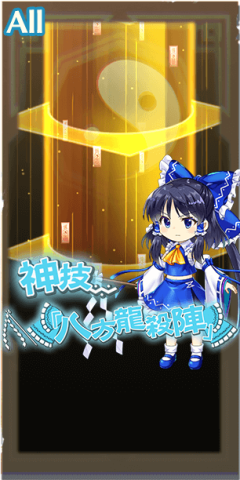 A Spell Card of Reimu Hakurei, who travels between worlds. This is an attack that can seal and slay a dragon. Reimu is particularly skilled with techniques that seal her target. This attack is probably one of Reimu's techniques that she calls ''divine powers.'' These techniques seem to differ significantly from those usually employed by shrine maidens... No, perhaps the shrine maidens of ancient Japan were capable of feats such as this.
*Pre- and Post- effects assume max level. Effects per level can be viewed here.
Pre-Attack Spell Card Effects 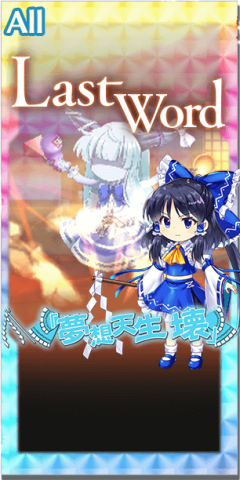 The Last Word of Reimu Hakurei, who travels between worlds (a Touhou LW original). She performs a kagura, a ritual dance, to summon an incredibly strong divine spirit. The identity of this divine spirit is still a mystery, but it has become clear that this being is what caused Reimu to embark on her journey as a world-hopping shrine maiden. Reimu did not originally have the strength to summon such a powerful divine spirit in this manner. Even after Yukari trained her, there was a clear limit that she could not surpass.
*Pre- and Post- effects assume max level. Effects per level can be viewed here.
Pre-Attack Spell Card Effects

Universe F1 Reimu Hakurei, the "God Summoning Shaman", is a true enigma. Not only do we know very little about her Universe, but we hardly understand her motivations, or her end goal, or even the full extent of who she is working with to achieve those goals. But one thing is for certain; she has traveled through countless Universes chasing the Lost Word incident, and has the experience to back it up, both in battle and in composure. She is mostly like the Reimu we know, but the incident has worn on her; she is serious, to the point, and blows through any youkai in her path. That may be all we can glean from her past for now, but we do know that she is undoubtedly the strongest Friend we've ever made so far, and is sitting at the top of EX Tier.

For farming, Reimu is one of the strongest characters to date. Unlike other characters, Reimu has a unique advantage where every single piece of her kit contributes to her damage output. As a result, she is usable even when she has no limit breaks or awakens. With her Last Word, Fantasy Nature - Destruction, she can easily output a level of damage that obliterates most enemies in her path. This level of destruction is made possible by her skills, abilities, and last word's pre-effects that give her just about every kind of support she would want to maximize damage. As a result, Reimu is not only a powerful character when it comes to farming events, but she can also farm nearly every story card stage by herself to date.

Befitting the one who wishes to resolve the Lost Word incident herself, Reimu is no slouch when it comes to resolving challenging content. While Reimu can reach her cap due to her powerful skills and ability, she can still throw out damage that compares to the best of the bunch after setting up - no need to sacrifice setup potential for turn 1 damage. Her 1st skill, Hi no Kagutsuchi, raises the party’s CRIT ATK and Accuracy by 3 levels for 3 turns. However, this comes at the cost of inflicting 2 layers of Burn anomalies to the team for 4 turns. Reimu’s 2nd skill, Ame no Fuyukinu, serves as a way to augment her survival by giving herself 2 barriers and providing the party a 50% damage reduction against Youkai enemies for 2 turns. However, this comes with another penalty -  inflicting 2 layers of Freeze anomalies to the team for 4 turns. Reimu’s 3rd skill, Takemikazuchi, gives herself 2 P, inflicts 3 layers of Paralysis anomalies to one target for 4 turns, and inflicts 2 levels of CRIT Evasion to all enemies for 4 turns. Though her team may suffer side effects from these skills, Reimu’s ability, Capable of manipulating auras?, turns these self-inflicted anomalies into a benefit. Every anomaly aside from Poison and Blind instead augments her Yin ATK, Yang ATK, CRIT ATK, and CRIT Accuracy even further. As a result, her buffs can be capped on the 1st turn.

Reimu’s spell cards are also no slouch. With her 1st Spell Card, Bewitched Weapon: Merciless Purification Rod, she not only gains 1.5 P instantly, but can provide the team with 3 levels of Agility for 4 turns. Her 2nd Spell Card, Divine Arts: Omnidirectional Dragon-Slaying Circle, provides the team with 3 levels of Yin DEF for 4 turns and inflicts 3 layers of Paralysis to all enemies for 3 turns. All of these Spell Cards not only have good utility, but can also deal a significant amount of damage by themselves even without any Limit Breaks. With that as an advantage, she can use these Spell Cards to support the team or set up her Last Word even further as it has both Slicing and Hard scaling.

Ultimately, Reimu can fill a lot of roles by herself. While she may not be a forgiving character to obtain, she will be able to serve you well if you can acquire her. Be sure to stay a bit wary of her though. She is still competing with you to resolve the incident!

For her 1st Spell Card, Mysterious Sword Master is a choice. This spell card can hit enemies hard with all of its bullets having slash bullets. From there, you can utilize other story cards that can help boost Reimu’s power even further. Spirit Power cards, such as The Witch of Scarlet Dreams, Midnight Tea, and It’s Spring! come to mind as cards that Reimu can use to her advantage. Another story card that Reimu can use would be story cards that debuff like Underworld Party Night or Anniversary at the SDM. In the future, there will be another story card that can help further Reimu’s power even more. If you wish to augment Reimu’s Last Word even further, you can feel free to use stat filler that contain Yin ATK, preferring ones with either Agility or Yin DEF.

While Reimu’s best slot is not yet available in Global, Reimu can instead use Puppeteer and Necromancer as her slot as it augments all her bullets with 50% Light bullet boost. Another alternative would be story cards like Mega Flare, Congress of Sages, or Anniversary at the SDM. In the future, she will get a story card that will push her already great power to newer heights.

Reimu would prefer her 3rd skill, Takemikazuchi, maxed out first as this skill would allow her to use 3 boosts in the 1st turn which would give a bigger boost than her other skills. Her 1st skill, Hi no Kagutsuchi, should then be maxed as this skill provides her the biggest power boost with a boost to her CRIT ATK and inflicting herself with burn anomalies. Finally, her 2nd skill, Ame no Fuyukinu, should then be maxed as this skill gives her another power boost with the Freeze anomalies that she inflicts to herself while also increasing her own survivability.

+ Insane overall damage with her shots, spell cards, and Last Word
+ Power generation is no problem with her Spell Cards and skills
+ Tanky due to her passives and 2nd skill