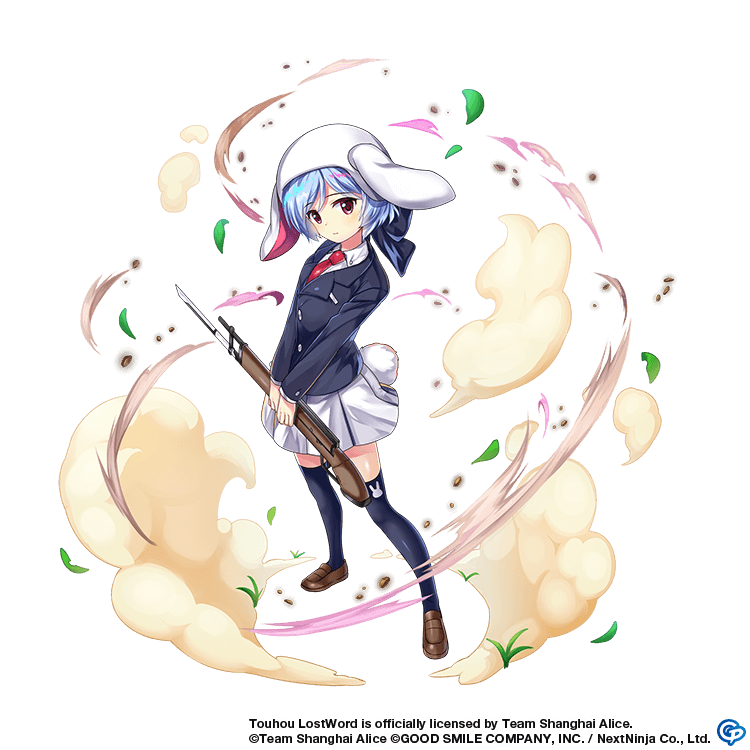 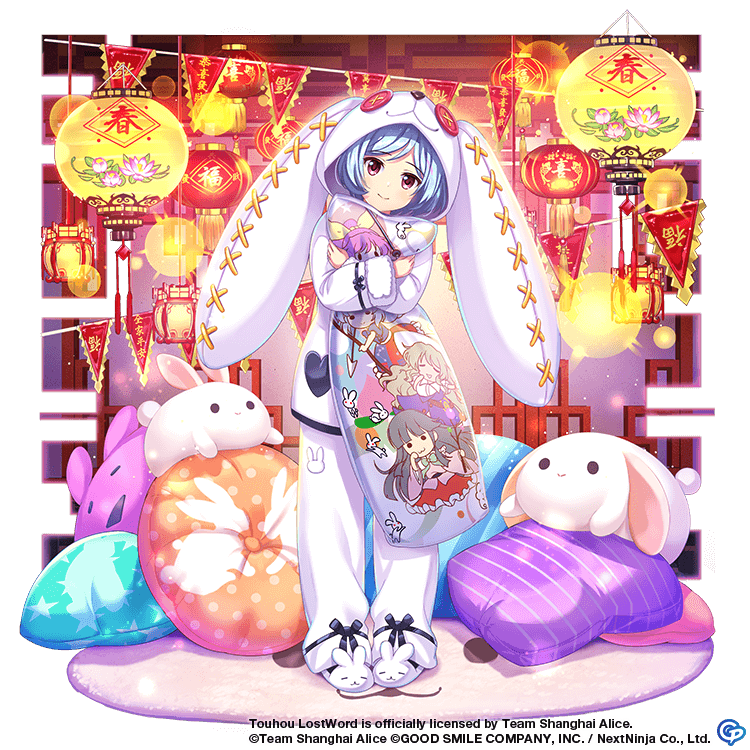 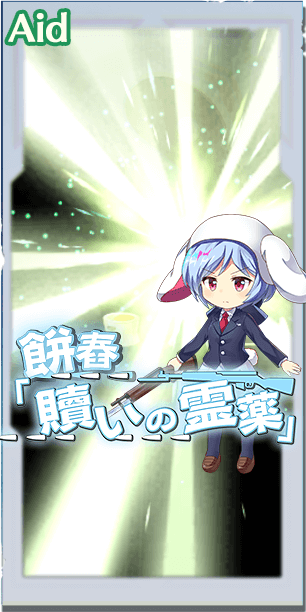 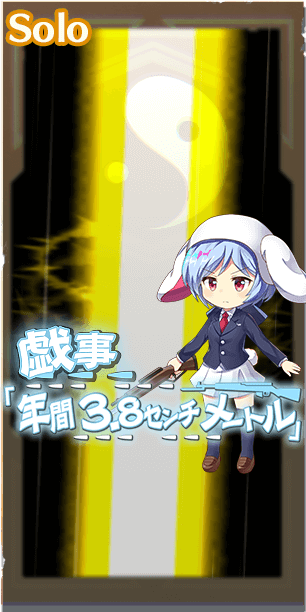 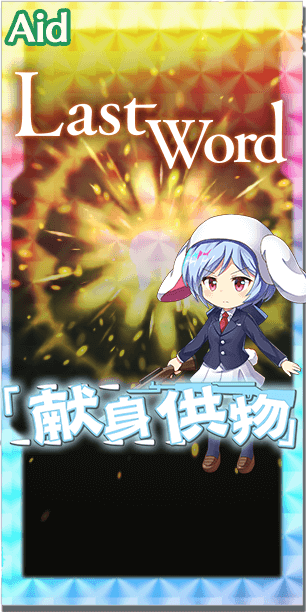 Note: While she's tagged as a Destruction unit, Reisen is a supportive unit, and simply has that role due to the abundance of Killer in her kit.

Reisen was a rabbit soldier who fled to the earth, only to be sent back home with a letter to the Watatsuki sisters. Afterwards, she wound up becoming their personal pet, to replace their other pet who had fled to the earth - Reisen Udongein Inaba (at the time, merely Reisen). Yes, they gave her the exact same name as their old pet. Outside of this, Reisen serves as a trainee in the Lunar Defense Corps, so perhaps it should serve as no surprise that she’s a D-Tier Friend.

Don’t even try to farm with Reisen. Her Last Word deals no damage, and even though her second Spell Card has a Killer that's effective against a large majority of the cast, her base attack stats are simply too low for it to accomplish anything on Lunatic. However, as her own speed is somewhat middle-of-the-road, she can serve as a buffing support for anyone slower than her.

For harder fights, Reisen is a mixed bag. She has a lot of positives - namely, she buffs almost every stat there is, with not insubstantial values either. She even provides a massive chunk of team-wide Evasion and a large heal on her Aid Last Word. Unfortunately those positives are offset by two major flaws - firstly, the durations of her buffs are low, 2 turns each. This wouldn’t be so bad if it wasn’t for the fact that the majority of them are on her first Spell Card and Last Word, which means that unless she’s attaching her buffs to pre-existing buff stacks with a duration of 3 turns or longer, Reisen must choose between either using her first Spell Card, or her Last Word.

Additionally, she also has extremely low damage, in spite of the fact that she’s blessed with the wonderful Gensokyo-Killer, as her attacking stats are abnormally low. She also has no way to Break Barriers. Finally, her Last Word also leaves her with an extremely high chance of getting knocked out immediately, which while not the worst thing in the world, is pretty funny.

Overall, Reisen’s still definitely better than nothing, and due to the nature of LostWord it’s almost certain that you’ll get use out of her. Just don’t expect too much from her, she’s just a trainee after-all!

Here are the chances for Reisen’s secondary effects (per bullet):

Since the heal on Reisen’s Last Word scales a little bit with Power, it may be worth it to give her a Story Card that bolsters her Power. Otherwise, as her Spell Cards do virtually no damage, it doesn’t really matter what you give her.

It legitimately does not matter what you put on Reisen’s Last Word, as she is almost certainly dead after she uses it. If you must minmax her, give her a Story Card that provides Spirit Power, so she can at least fire off one last amped up Focus Shot if she manages to live after using her Last Word.

Unfortunately, all of Reisen's skills don't benefit much from levels. It may be worth it to rush Lunar Veil to level 6, as it obtains 2 Levels of Evasion UP at that point and hitting level 6 is pretty easy, but otherwise she should be on the last for your training list. When you do, Making Strength Medicine should be prioritized, as it's generally more universally useful than Making Sight Medicine, and Lunar Veil can be maxed out whenever.

-Most of her buffs take a turn to execute
-Buffs are short, at 2 turns or less each
-Last Word deals no damage
-Low damage overall
-Cannot Barrier Break
-Granting the entire party Quick is more of a detriment than a boon

Who missed me? (Alternate title: Tales of a Wandering Master)
Hello my peeps! It seems like I’ve gotten back into the game after taking a break from…
Busti’s Stall Diary Chapter #502: :fgo_spicy2san: KANOU-SAN WHY?! :fgo_spicy2san:
https://www.youtube.com/embed/Y70gpPq5t64 1197 posts - 49…
FGO Dev Diary Vol 3 aka screw all your grail/mat plans
2 Billion QP Cap A bunch of full screen NP’s Servant Coins are here a year early…
Busti’s Stall Diary Chapter #501: Arts
With not long until Castoria is released into Na, I decided to create an assortment of…
[JP] LB 6.5 "Death and Revelation World Traum: Life and Death of a certain Illusion" Pre-Campaign
Pre-campaign to run from May 18th to June 30 to get players ready for LB 6.5 releasing…
Read More