Remilia Scarlet (The Heat of My Fingertips) 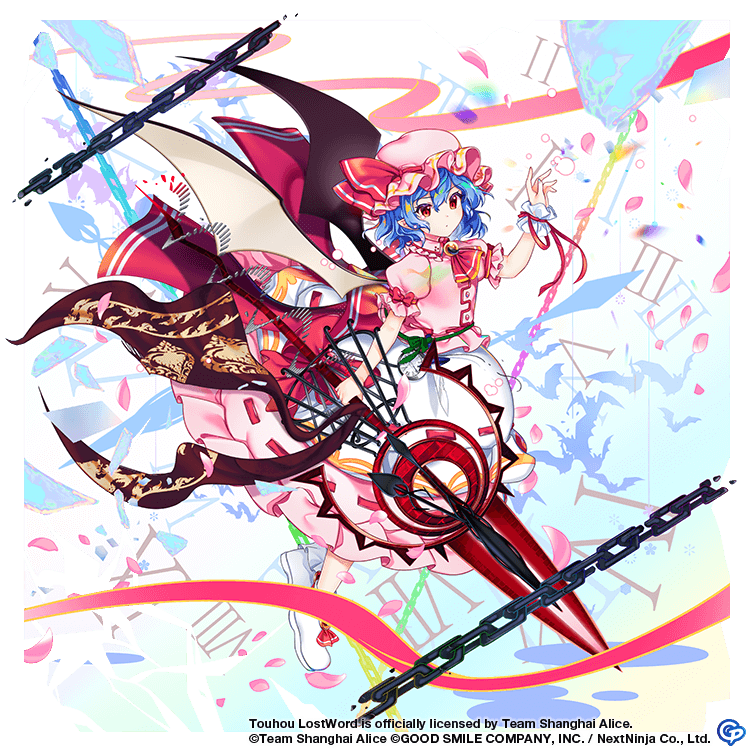 The Spread Shot of Remilia Scarlet, who has almost reached the end (a Touhou LW original). She does her best to fire shockwaves from her Gungnir Muspelheim. It's cool when bright shockwaves are released from a weapon. Remilia seems to share this opinion, evidenced by how incredibly cool this attack looks.
Gungnir Break

The Focus Shot of Remilia Scarlet, who has almost reached the end (a Touhou LW original). She thrusts her Gungnir Muspelheim forward with all her might. It is not uncommon for strong thrusting attacks to release shockwaves with a range that far exceeds the length of the weapon. Remilia switches between Arrow and Break, depending on what the situation demands. She can do anything with just a single Gungnir. 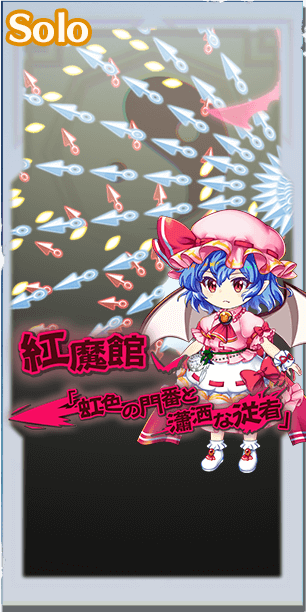 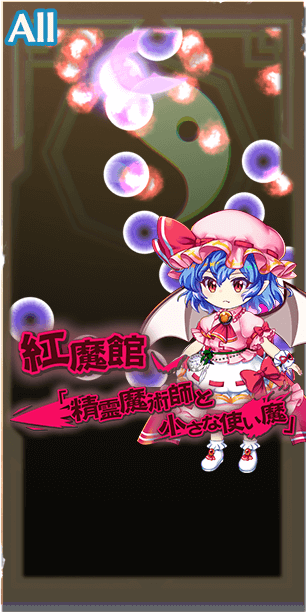 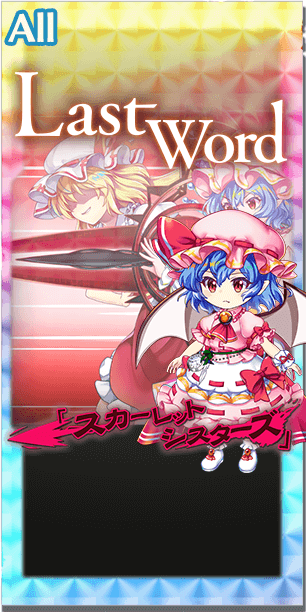 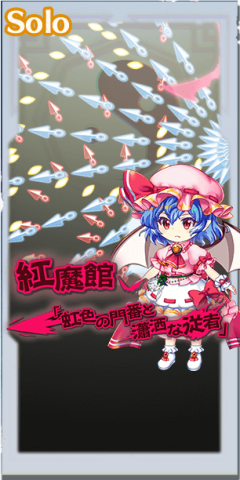 A Spell Card of Remilia Scarlet, who has almost reached the end (a Touhou LW original). She summons two different familiars from her Gungnir Muspelheim. The familiars shoot different types of bullets. Remilia summons them by reading the records stored within the Gungnir Muspelheim.
*Pre- and Post- effects assume max level. Effects per level can be viewed here.
Pre-Attack Spell Card Effects 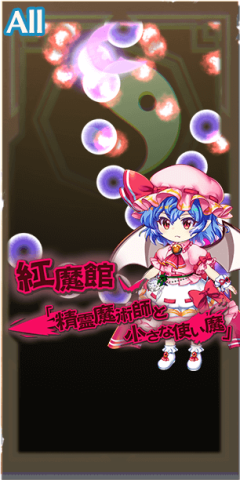 Inflicts 2 layer(s) of Barrier Status: Burn to all targets (3 turns). 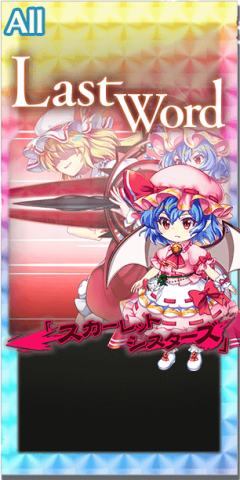 The Last Word of Remilia Scarlet, who has almost reached the end (a Touhou LW original). She attacks by loading the records of her little sister into Gungnir Muspelheim. She loads as much information about her late sister as possible, so her sister is not summoned as a familiar but remains within Gungnir Muspelheim, almost as if she possesses the weapon. The excessive amount of information causes an image of her sister to appear momentarily. However, this is only an illusion. During this attack, Gungnir Muspelheim becomes a weapon that is Gungnir and Laevateinn simultaneously.
*Pre- and Post- effects assume max level. Effects per level can be viewed here.
Pre-Attack Spell Card Effects

Adds 2 layer(s) to own Barrier.

L80 Remilia Scarlet was released on July 15th in Relic Prayer: Reaching Out for Salvation.

The Scarlet Devil Mansion is somewhat an enigma in the Touhou series, merely known as a Western-inspired residence that simply appeared within Gensokyo's borders one day. Obviously, it is inhabited by many different youkai and the titular Scarlet vampires. After their first major incident, the mansion has calmed down to be a regular place of irregularities, just like the rest of Gensokyo. The head maid, Sakuya Izayoi, is even found at times to assist in resolving other incidents...mainly because Remilia Scarlet told her to do so. The head mistress is a powerful figure in her own right, but what would happen if the mansion itself was seperated from her? Would her strength similarly vanish? The bonds Remilia has secured with her fellow mansion-dwellers has ended up creating a true menace in the form of L80 Remilia Scarlet, who is easily an EX-Tier Friend.

For farming, Remilia is one of the best characters in the game, being able to farm every story card stage by herself She buffs herself enormously with her skills and spellcard effects, in addition to having an optimal story card The Heat of My Fingertips which offers an unprecedented 95% damage boost to her last word.

In challenging content, Remilia is no slouch either. She shows her prowess by providing both team support through her skills and powerful barrier breaking with her Spell Cards. Remilia’s 1st skill, Lady Nosferatu, provides the party with 2 levels of Yin ATK and Yang ATK for 5 turns and self inflicts 3 layers of burn barriers to herself. Not only does this skill provide the team a huge duration for their attack buffs, but it also allows Remilia to augment her power further thanks to her ability, Capable of manipulating fate (Lost). With this ability, the burn anomalies that she inflicts on herself strengthen her even more. Her 2nd Skill, Draculoid Girl, provides her 2P, 3 levels of Accuracy, and Quick to herself. This skill not only enables her to fully boost her attacks instantly, but also allows her team to always benefit from Spell Card and Last Word effects thanks to Quick. Her 3rd Skill, No-Life Princess, inflicts 2 levels of Yin DEF and Yang DEF down to all enemies for 3 turns while inflicting them with 2 layers of burn anomalies for 4 turns. Combined with her 1st skill, her 3rd skill allows the team, especially Yin nukers, to do a great deal of damage. Alternatively, Remilia can use the burn anomalies as a way to break more barriers. The only downside to these skills is their long cooldown between uses.

Remilia’s 1st Spell Card, Scarlet Devil Mansion: Rainbow Gatekeeper & Elegant Maid, provides the team with 2 levels of CRIT ATK and Accuracy for 3 turns. The 1.35P returned to her afterwards also allows her to boost more freely, making it extremely useful. Her 2nd spell card as a post effect which she can use to squeeze out more boosts each turn. Her 2nd Spell Card, Scarlet Devil Mansion: Spirit Magician & Little Familiar, further debilitates enemies by inflicting 2 layers of burn anomalies to all enemies, 1 extra burn anomaly to the one Remilia is targeting, and 2 levels of CRIT Evasion down to all enemies. This synergizes well with the burn breaking property present in both her Spread shot, Gungnir Arrow, and this spell card. Finally, her Last Word provides the team with 2 levels of Yin ATK, Yang ATK, and inflicts 2 levels of CRIT DEF down.

As far as barrier breaks go, Remilia is a mixed bag. With a P0 Moon shot on her focus, both her spell cards differ in terms of what they are meant to break. With her 1st Spell Card, she has a spread of 3 Metal and 3 Star breaks. The Metal breaks are easier to make use of, as they require fewer boosts to unleash. However, her P generation with her spell card can compensate for the number of boosts needed to fire off star breaks, to an extent. Her 2nd Spell card has a spread of 2 Fire, 2 Water, and 2 Moon breaks. While the spread elements aren't as good as her other attacks, it has strong breaking potential by breaking the plentiful burn barriers she inflicts. Finally, her Last Word has a spread of 6 Moon breaks which can come useful in content where Spell Card bombs are more prevalent.

Ultimately, Remilia is a team supporter who also can do a substantial amount of damage by herself. While she may have lost her ability and everything, she will fight to regain what she has lost.

As P up is always a valuable tool to have, Myouren Temple Anniversary and Witch of Scarlet Dreams both are powerful story cards to use on her with the former being more for team support, and the other to leverage her breaks. On the other hand, her 2nd spell card can use Unknown Barrier Team as a way to potentially do more damage against her enemies. Finally, if you want to optimize her Last Word damage, look for Yin ATK filler, preferring ones with Agility.

Her strongest story card for her Last Word would be The Heat of My Fingertips as it gives a substantial boost to her damage. For alternatives, Standing Behind You can serve as a good option. You can also use Underground Party Night or Anniversary at the SDM if Remilia is tasked with taking out a single enemy, albeit at a worse performance than with her strongest story card.

Remilia prefers to start by leveling up her 2nd skill, Draculoid Girl, as it provides her with 2 P on the first turn as well as some extra Accuracy. The extra power can then be used for either barrier breaking with her 2nd Spell Card, as well as give her a good boost in damage. Next, her 1st skill, Lady Nosferatu, should be leveled as it gives a boost to Yin ATK, Yang ATK, and inflicts 3 layers of burn to further her power. Finally, her 3rd Skill, No Life Princess, should be leveled as it inflicts a strong debuff on her enemies as well as the ability to break more barriers with her 2nd Spell Card.

+Amazing T1 damage
+Good barrier breaks with burn anomaly breaks and some decent access to other elements.
+Great support with her skills and spell cards for both Yin and Yang nukers