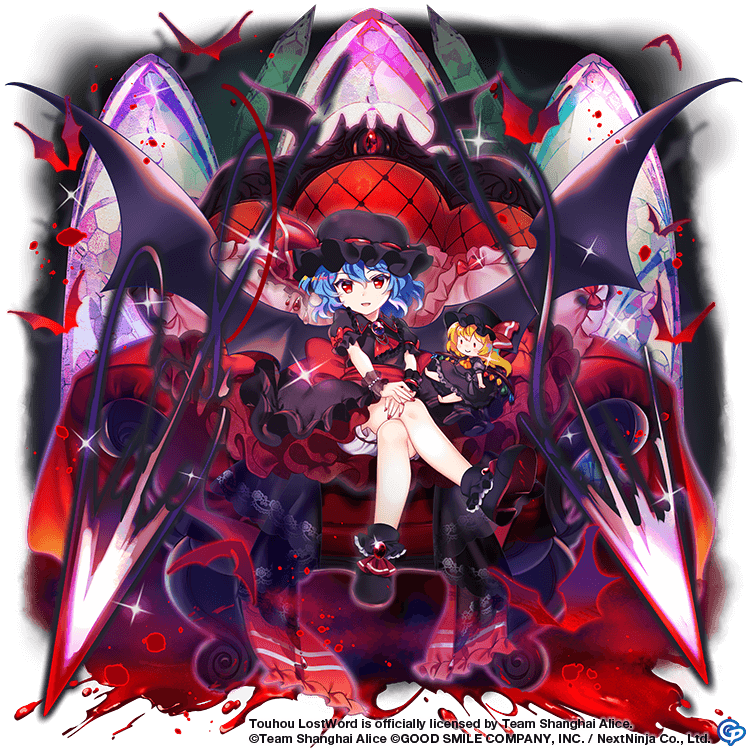 The Spread Shot of Remilia Scarlet with the twisted fate. She tries her best to launch a flying kick up into her opponent. The current mistress of the Scarlet Devil Mansion may look young, but she is a devil who possesses incredible mental fortitude from traversing countless fates. However, that doesn't necessarily mean she doesn't act like a child...
Demon Lord Arrow

The Focus Shot of Remilia Scarlet with the twisted fate. She tries her best to tackle her opponent at high speed. A sturdy body is one of the traits that all vampires possess. Their durable body is probably their best option when choosing a basic weapon to use in a fight. Perhaps this is more energy-efficient than using magic. 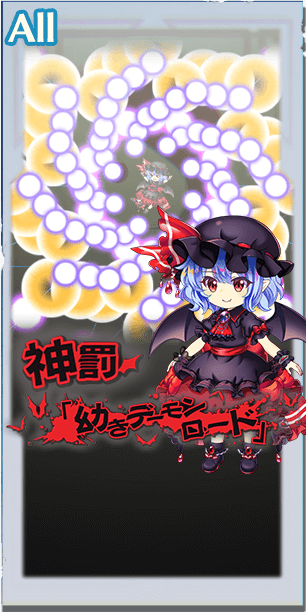 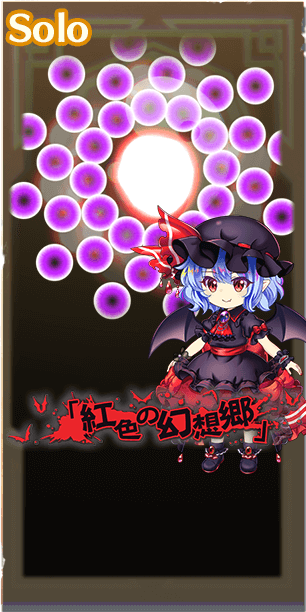 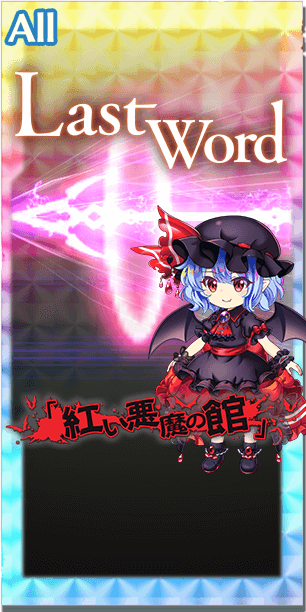 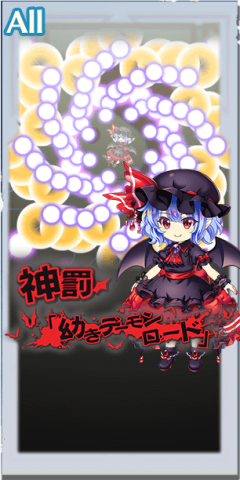 A Spell Card of Remilia Scarlet with the twisted fate. She attacks with lasers that skewer space and fast-approaching bullets of light. This Spell Card that severely limits her opponents' movements is worthy of the ''Demon Lord'' title. She certainly does look young, but it is theorized that she possesses an unnaturally large amount of magical energy.
*Pre- and Post- effects assume max level. Effects per level can be viewed here.
Pre-Attack Spell Card Effects 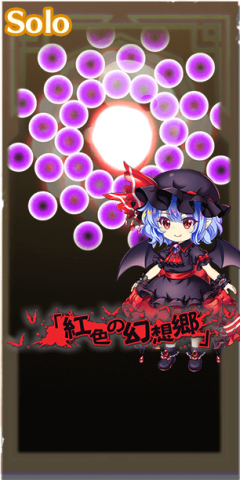 A Spell Card of Remilia Scarlet with the twisted fate. She stains the world of Gensokyo scarlet with mysterious mist. It is said that she releases this mist from her fingertips. The Remilia of our world created this mist to cover her kingdom in scarlet fantasy and to shut out any light from the sun so she could walk outside during the day... But it seems this Remilia was unaware of the magical mist's original purpose.
*Pre- and Post- effects assume max level. Effects per level can be viewed here.
Pre-Attack Spell Card Effects 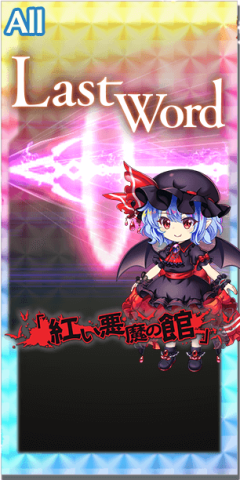 Universe E9 Remilia Scarlet, the Tiny Devil Mistress, is still similar to how we know her in more familiar Universes; she is the head of the Scarlet Devil Mansion and the older sister of Flandre Scarlet, but things aren't quite right in this specific rendition of the mansion. Although Meiling still guards the gate, Koakuma still tends to the library, and Patchouli still studies endlessly, Sakuya is nowhere to be found, and there's an air of unease in just being there. Remilia is still incredibly strong, and her ability, "to manipulate fate", is still intact in this version of her, making her an EX-Tier Friend, but will it be enough to protect the Mansion itself and her family in it?

For farming, Remilia’s damage is not to be underestimated. Despite her Last Word,

Scarlet Devil Mansion, having a boost scale of 1-1-3, her turn 1 damage is still excellent and it grows dramatically with access to all three boosts. Thanks to this, Remilia  is both a good option for event farming and can also be used to farm story card stages. Remilia can farm 3-3-3 at 8 SP, 3-6-3 at 8 SP, Hifuu E9 at 12 SP, and a future story card stage.

In challenging content, Remilia leans on her insane damage with 3 boosts, mentioned above. Remilia also supports the team capably with her sizable buffs for Yin attackers. With her 1st skill, Stamp Magic, she provides herself 1.25 P and charge while providing 2 stages of Yin ATK up to the party for 2 turns. The Yin ATK support is also supplemented by her 3rd skill, Fantasy Newcomer, which not only provides 2 stages of Yin ATK up to the party for 3 turns (extending the duration of the 1st skill), but also provides 2 stages of Crit ACC up for 3 turns and 0.40 P to the party. These 2 skills also are on a short cooldown coming at a 4 turn cooldown, thus allowing her to cycle usage of these for content like Elemental EX. As for her 2nd skill, Scarlet Mist Barrier, Remilia gives herself 1 barrier with a 50% chance to get 2 instead while also giving herself 2 stages of Crit ATK up for 2 turns and reducing all her enemies’ evasion by 2 stages for 2 turns. All in all, her skills alone lend her to be a premium Yin support with some ability to help bolster the crits of her allies. However, this isn’t all that Remilia can do to help the team. With her 1st Spell Card, God’s Punishment: Young Demon Lord, she provides 2 stages of Yin DEF up to the party for 3 turns and inflicts 2 layers of Poison anomalies to all enemies for 2 turns. Her 2nd Spell Card, Scarlet Gensokyo, gives her 1.0 P and 3 layers of Poison anomalies to a single enemy for 3 turns. The poison barriers that she inflicts are a bit contradictory to her kit, as she is a Yin nuker while poison anomalies are effectively a Yang debuff. At the same time, her 2nd spell card is a bit awkward to use effectively for the poison break. One notable thing that Remilia uniquely has is her Focus shot, Demon Lord Arrow. Her focus shot, with proper setup, can hit really hard. At the same time, it is guaranteed to stun the enemy when used with 3 boosts. Thus, Remilia’s focus shot provides both a powerful attack and utility that outclasses even spell cards from other youkai. Nearly all of her attacks also can heal herself, thus making her a bit bulkier than expected.

For barrier breaks, Remilia is primarily focused around Moon and Fire. Having a P0 Moon spread shot, Demon Lord Cradle, Remilia also possesses 2 Fire and Moon breaks on her 1st spell card. However, the 1st spell card’s breaks are backloaded, locked behind the need to boost multiple times. Thus, you can only reliably count on 1 Moon and Fire break on the first st turn with 2 boosts. On the other hand, her 2nd spell card has 3 Moon and 3 Fire. With a 1-2-2 boost scaling, she can reliably get 2 Moon and 2 Fire breaks on the 1st turn with 2 boosts. Additionally, this spell card can also be used to break Poison anomalies if need be. However, as mentioned earlier, it is a bit awkward to use this as the line which breaks Poison anomalies will hit during the middle of her attack instead of right away.

Overall, Remilia is a powerful mistress to behold. With the ability to do insane amounts of damage on the 1st turn and even more with setup, Remilia backs this up with great support as the best Yin supporter as of her release. With good barrier breaks to boot, Remilia can do it all.

Spirit Power is always valuable for any character. As such, using something like The Witch of Scarlet Dreams helps supplement her power generation. Another option for Remilia is to lean into her killers with story cards that give her Crit ATK like Miracle Mallet to help make her Last Word do insane damage. Puppeteer and Necromancer can also be used to utilize her 2nd Spell Card as a nuke of sorts. One other option you can use are Accuracy up cards like Shichi-Go-San School Visit?! are also useful to have to boost her naturally lower accuracy to perfection  (a need due to her being a Destruction type character). Finally, for stat filler, look for Yin ATK stats, preferring ones with Yin DEF.

Remilia’s best slot is Unknown Barrier Team as it provides her the best possible boost to Energy bullets, plus 2 YIN ATK UP. An alternative option would be Underworld Party Night due to its high CRIT DEF DOWN and YIN DEF DOWN debuffs, but keep in mind that this is on a single target. Another alternative would be Standing Behind You , if you want to power up her CRIT ATK and Moon Bulelts, or World in Hand for Energy Bullet UP + CRIT ATK UP mainly.

Remilia wants her 2nd skill, Scarlet Mist Barrier, leveled up first as it provides her with the accuracy that she needs and Crit ATK for damage. Afterwards, her 3rd skill, Fantasy Newcomer, provides her the best boost by giving her P2 on the 1st turn with the skill maxed and provides more team support than her 1st skill, Stamp Magic. Finally, her 1st skill should be leveled for the extra Yin ATK that it provides for the party. However, if you want to reach P2 on the 1st turn at the earliest, leveling up her 1st skill would be better as it gets you the power faster.