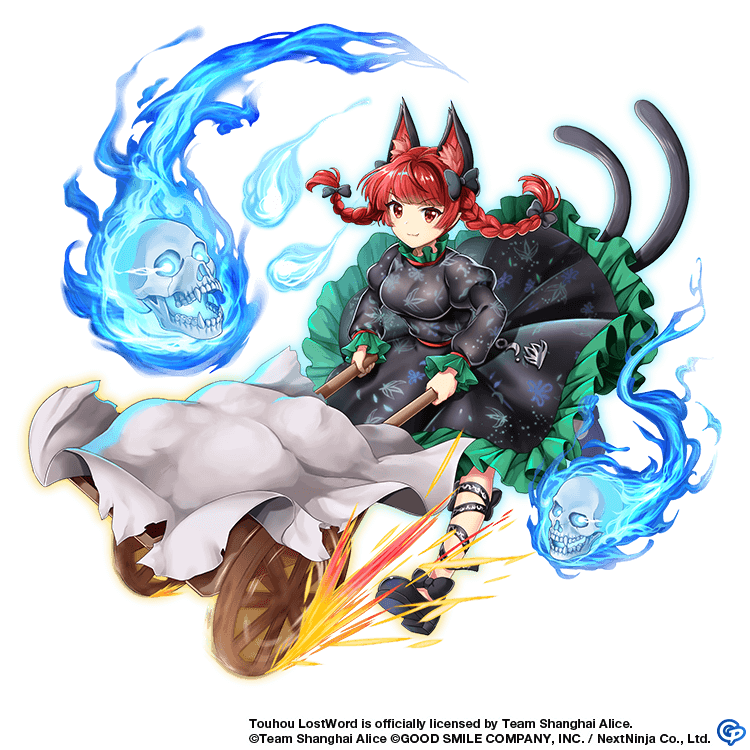 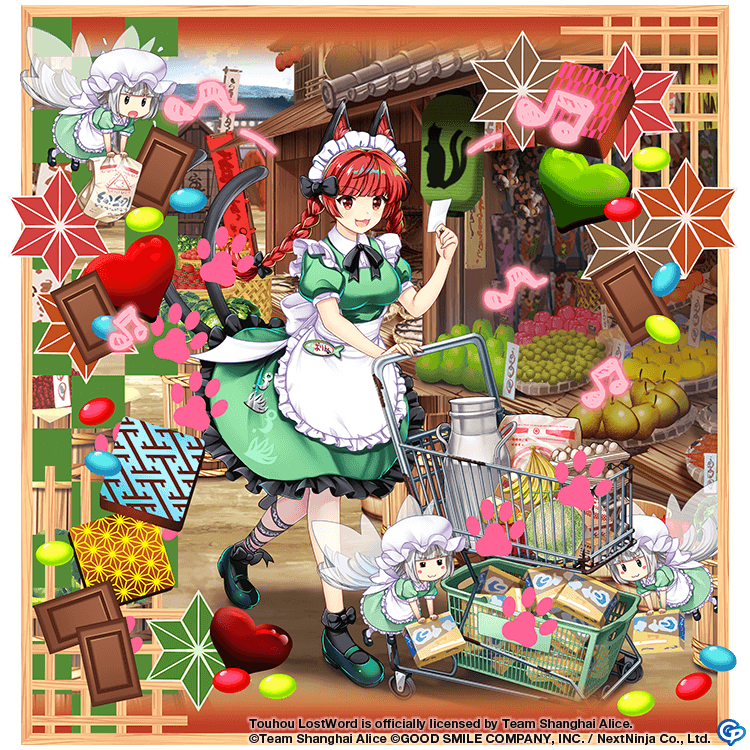 Rin Kaenbyou's Spread Shot (a Touhou LW original). She crashes into her target with her corpse-carrying wheelbarrow. Don't be fooled by how cute she looks―her wheelbarrow holds quite a few corpses, so there is hefty momentum behind this attack.
Fire Punch

Rin Kaenbyou's Focus Shot (a Touhou LW original). It's called a punch, but her claws are out, so it's more like a scratch. Rin is a kasha, which means burning cart in Japanese, so her ''punches'' are enveloped in fire. 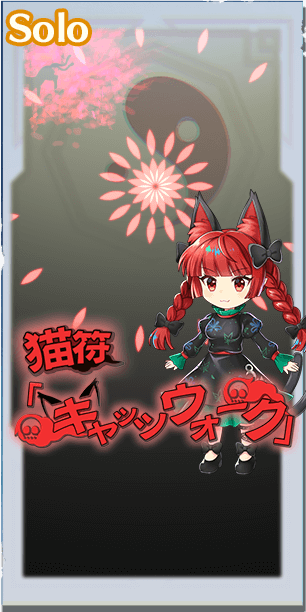 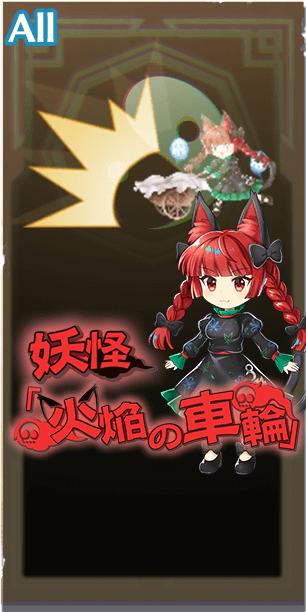 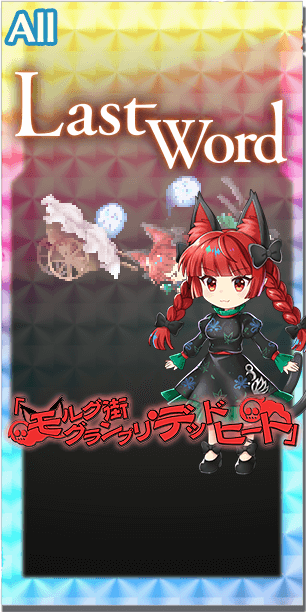 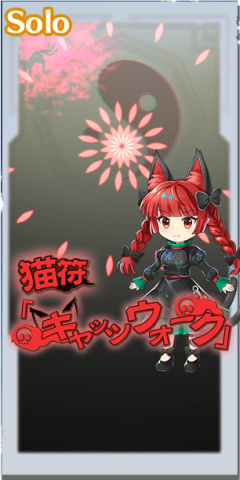 Rin Kaenbyou's Spell Card. A black cat walks about, scattering bullets in all directions. A catwalk is a narrow footway that one has to walk like a cat to cross. An infamous superstition also states it is bad luck if a black cat crosses your path. Tales of black cats as ill omens seem to have originated in western Europe, where they were once thought of as familiars to witches. However, they are considered to be lucky in Japan. An emperor of Japan had a black cat, and there is a famous novel written about them with the cat as the main character.
*Pre- and Post- effects assume max level. Effects per level can be viewed here.
Pre-Attack Spell Card Effects 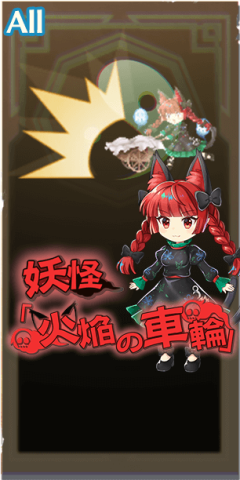 Rin Kaenbyou's Spell Card. She attacks with wheels imbued with fire. Rin is a type of youkai called a kasha, which is written with two Japanese characters; the first means ''fire,'' and the second means ''cart'' or ''wheel.'' There is another type of youkai called a wanyuudou, depicted as a flaming wheel with a tormented face of a man. Perhaps they are related.
*Pre- and Post- effects assume max level. Effects per level can be viewed here.
Pre-Attack Spell Card Effects 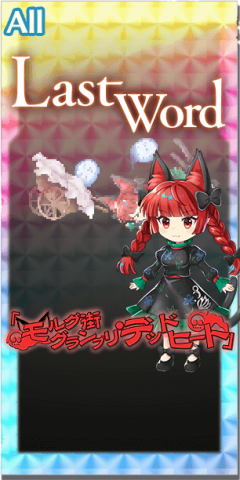 Rin Kaenbyou's Last Word (a Touhou LW original). Her wheelbarrow charges forward at full throttle. A morgue is a place used to store human corpses. The term was originally a French word that was used to indicate the place in a prison where new prisoners were kept so they could be easily identified. This meaning correlates to Rin's job in Former Hell, as what is Hell if not a prison for the damned? It is also common for morgues to have crematory facilities.
*Pre- and Post- effects assume max level. Effects per level can be viewed here.
Pre-Attack Spell Card Effects

When inflicted by Barrier Status: Burn, inflicts the same Barrier Status to target.
When using Boost, own Yin ATK 1 level UP (1 turn).

Rin Kaenbyou was released on November 26th, 2021 in Purrfect Pets of Former Hell.

Rin Kaenbyou, Hell’s Traffic Accident, prefers to go by ‘Orin.’ That’s the kasha in a nutshell - no taste for long names, for anything formal or stuffy really, and she’s certainly friendly with just about everyone she meets. One of the most lighthearted youkai around, even though she’ll drag away the corpses of the dead to fuel the underground furnace, she won’t kill you - she’ll even wait for you to die before she hauls your corpse off, how polite! She also looks out for her friends - even going so far as to cause a commotion to get the surface dwellers to stop her rampaging friend Utsuho Reiuji in the events of Subterranean Animism. It’s that same good cheer and friendliness, mixed with perhaps too much morbidity to be comfortable, that makes her fight on your side as an A+ Tier Friend and give any opponent paws.

For farming purposes, Rin benefits from a strong All targeting Last Word, Morgue Street Grand Prix - Dead Heat, boasting a 2-2-1 Layout and 2 Spirit Power on the first turn, a ton of Yin DEF DOWN and some Yin ATK UP in her kit, it even has a decent if not supurrr amazing 0%/20%/0%/30%/0%/0% Slicing scaling, and each Bullet is even tagged with the coveted Heavy, but it has a crucial, fishy catch - Rin has no native Accuracy UP. To counter-cat this, use Youkai: Blazing Wheel on the first turn with an Accuracy UP Story Card, then blitz them with a furr-st place finish.

For harder fights, Rin’s got purrfect corpse making potential aplenty. For starters her ability to support Yin attackers is simply the cat’s meow  - starting off with her skill Vengeful Spirit User, which inflicts 1 level of Yin DEF DOWN for 3 turns on all targets (and 2 Yang DEF DOWN to her primary target to boot). On top of this, Youkai: Blazing Wheel inflicts 2 layers of Burn for 3 turns on all enemies. To cat it all off, her Last Word, Morgue Street Grand Prix - Dead Heat races her opponents to an early grave with a further 2 levels of Yin DEF DOWN for 2 turns - meaning she can hit 3 levels of Yin DEF DOWN and 4 layers of Burn on all enemies in a meowsly 3 turns, with Corpse Cat Cart’s Quick ensuring she’ll move first on the third turn and kasha opponents off guard.

She’s also got solid, but not amazing Break potential, and we’re not just talking about the tendency for cats to paw things off shelves - Nitrous Dash provides 1 Solo targeting Moon Break for 0 Spirit Power on a Basic Shot. Additionally, Cat’s Sign: Cat’s Walk provides an average 1/2/2/3 Solo targeting Moon Breaks for 0/1/2/3 Spirit Power, and Youkai: Blazing Wheel provides the same but for Fire (although it’s rather a waste to use it for Breaking when it’s got such great Burn Barriers). Lastly, Morgue Street Grand Prix - Dead Heat provides All-targeting 4 Moon and 2 Fire Breaks for 3 Spirit Power in total if you’re truly despurrrate for Breaks or just don’t have a strong enough team or enough Yin attackers to get away with merely applying DEF DOWN.

The kasha does have some downsides - chiefly, her own damage potential isn’t the greatest, and she natively lacks Accuracy, but these are easily remeowdied with Story Cards. As such, she’s the purrfect Friend for just about anyone - so long as you aren’t catty about her ghastly punishments.

Due to a purrsonal lack of Yin ATK UP and Accuracy, both are nyantastic options to help her kasha up to her stronger teammates. Otherwise, Spirit Power UP will help her with Breaks, as well as being vital in the Arena for extra damage output. For stat sticks, look to Yin ATK, as her Slicing values are simply too low to bother with Agility.

Since Rin’s Last Word is entirely tagged with Heavy, she apurrciates Heavy DMG UP - namely, The Secret God of the Sky. Failing that, Yin ATK UP or Accuracy UP are also solid options, though she’s prefer to catch those lagging stats of hers up with Story Cards assigned to her Spell Cards

Corpse Cart Cat should be prioritized first, as it provides the greatest benefit to Orin both for damage and for Break ability. Afterwards, Zombie Fairy User provides a minor benefit to her damage, and lastly Vengeful Spirit User can be saved for last due to its minimal (albiet nice) benefit for Yang attackers.

-No Accuracy UP
-Low levels of Yin ATK UP