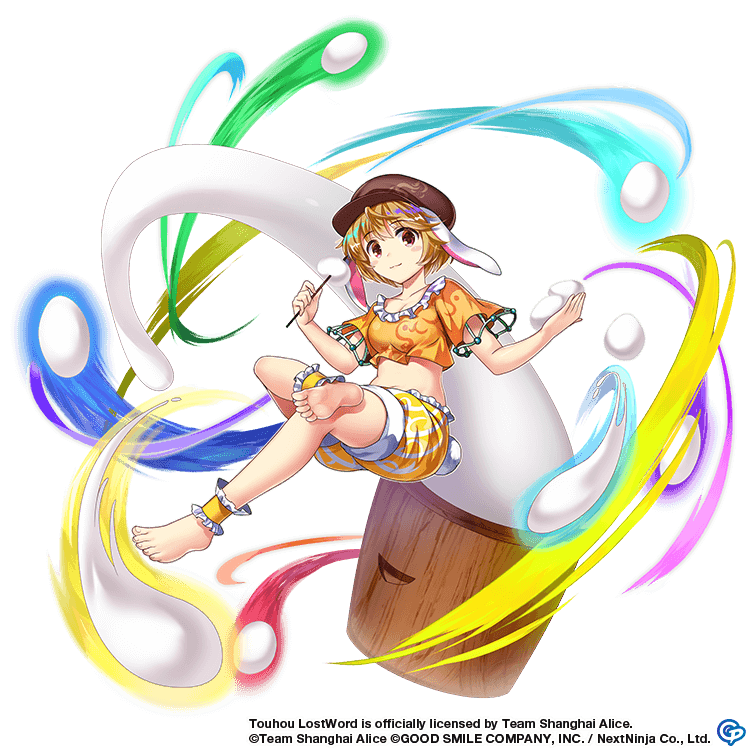 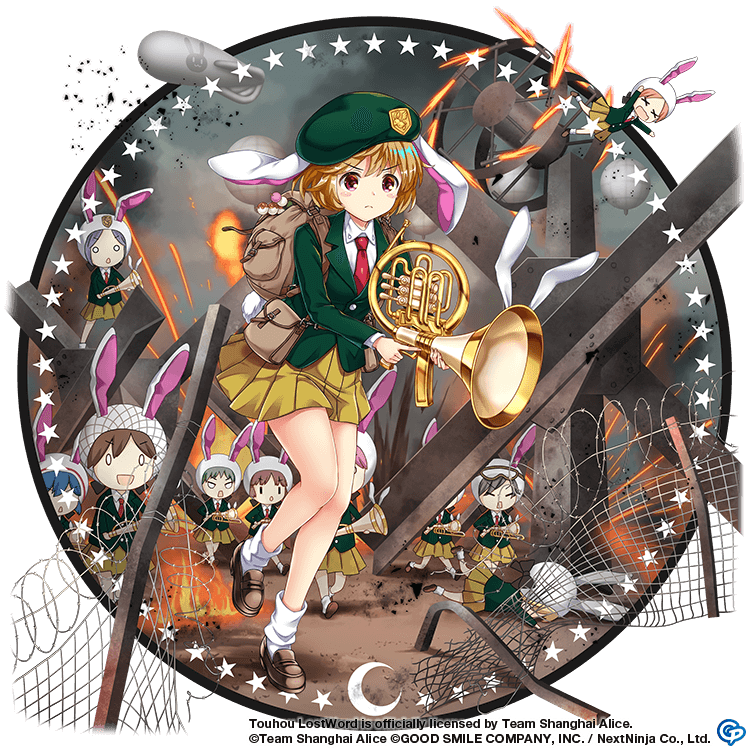 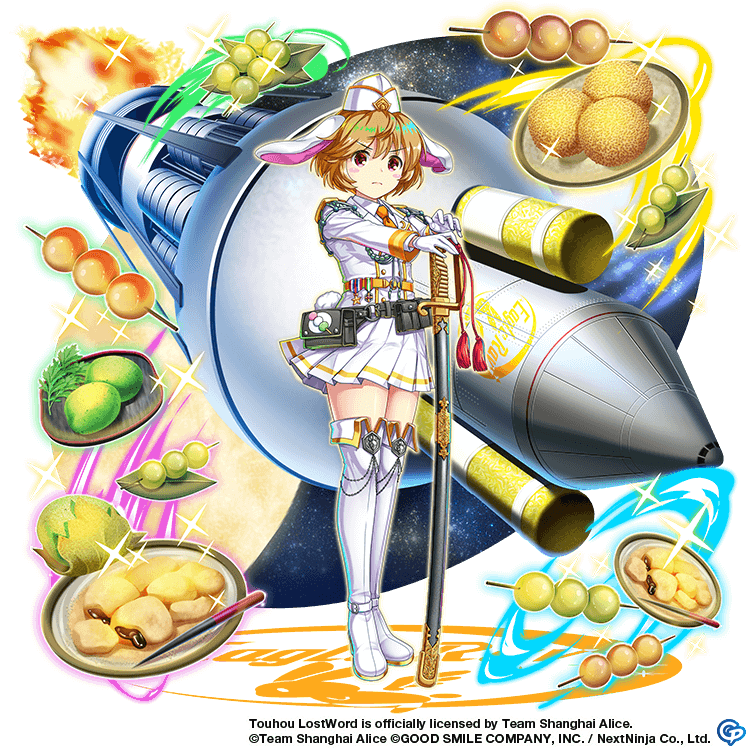 Ringo's Spread Shot (a Touhou LW original). In this strange attack, she shoots out a huge number of bouncy dango bullets. (Are they real dango?) Apparently, they taste rather good.
Strike Eagle

Ringo's Focus Shot (a Touhou LW original). She shoots out orange lasers in this attack. She does not seem to be carrying a blaster around, but since she is at a higher rank than your average soldier, she might be hiding an ace up her sleeve. 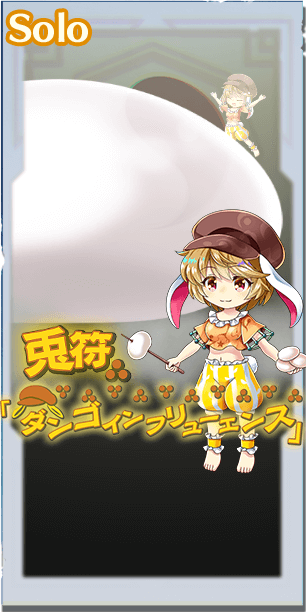 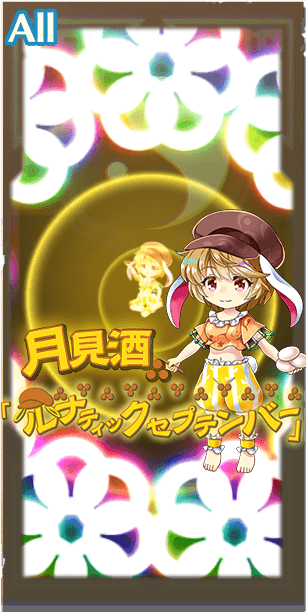 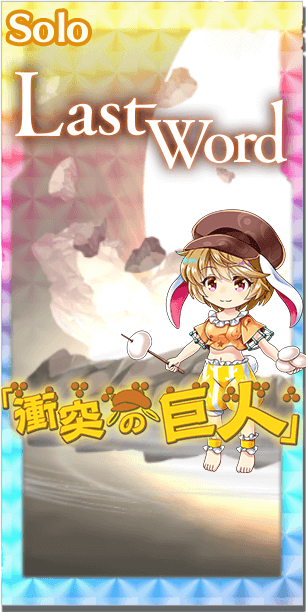 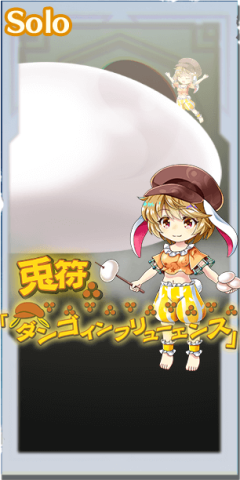 Ringo's Spell Card. She uses expanded dango to crush her target. The more dango Ringo eats, the stronger she gets. The stronger Ringo gets, the bigger the dango become.
*Pre- and Post- effects assume max level. Effects per level can be viewed here.
Pre-Attack Spell Card Effects 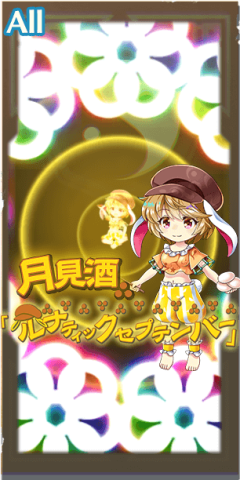 Ringo's Spell Card. She shoots out light as bullets in a rainbow-colored circle which scatters through the air. The light bullets are beautiful, but they might actually just be beautiful dango. How do the rabbits who came down to earth feel as they drink moon-viewing sake?
*Pre- and Post- effects assume max level. Effects per level can be viewed here.
Pre-Attack Spell Card Effects 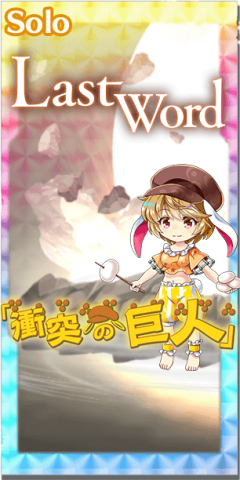 Ringo's Last Word (a Touhou LW original). From up in the sky, she drops the biggest dango imaginable on her target. Apparently, this huge dango is supposed to be an enactment of how the moon itself came to be. Perhaps the moon is actually just a big dango... No, that couldn't be.
*Pre- and Post- effects assume max level. Effects per level can be viewed here.
Pre-Attack Spell Card Effects

Ringo was released on July 16th, 2021 in Bunny Bunny Carnival.

A former member of the “Eagle Ravi” Earth Recon Unit, Ringo was sent to purify the earth and prepare it for the Lunarian invasion during the events of Legacy of Lunatic Kingdom. After that mess was resolved, Ringo and Seiran decided they liked the Earth too much, and simply opted to desert the Moon, now spending their days in Gensokyo each owning a dango stand. With the ability to grow in strength by eating dango, Ringo’s here to munch on sweets and supply your team with plenty of the stuff to buff them up as an B-Tier Friend.

For Farming purposes, Ringo herself doesn’t do a ton of damage, her Last Word is Solo targeting, and she’s much too fast to support most units for farming. Either put the difficulty down to Hard and stick to one boss stages, or look elsewhere.

For harder fights, Ringo provides your team with a ton of delicious dango, which isn’t only filling, but it provides them with fantastic buffs as well. Providing a lot of Yang ATK, Yang DEF, and Agility Up, the dango gobbler shines in any Yang-heavy party, but especially ones which feature Hard or Slicing attackers. Backing this up, she also has decent, though not great access to Moon Breaks. The former Eagle Ravi member can also break Blind barriers, though she’s reliant on teammates to supply them and they’re rather uncommon.

Overall, Ringo’s a relatively simple unit: she gives your Friends delicious dango, which buffs them up and raises their fighting spirit. She’ll even give you some! Just make sure to tell her that her dango’s better than Seiran’s.

Here are the values of Ringo's Hard scaling (per bullet):

Since Ringo’s Spell Cards are extremely Spirit Power hungry, each requiring 3 Spirit Power to get their third Break, she primarily wants extra Spirit Power. You can also shove an Accuracy into one of them to bolster the damage of her Last Word by putting something else on it.

While Ringo is lacking in personal Accuracy, she is also completely lacking in Yin ATK Up, meaning a Spell Card like Overwhelming Firepower will grant her much higher damage - especially if you can use a Story Card which provides Accuracy beforehand, or get it from a teammate. If for some reason you’re using her to farm, look to a source of Accuracy up instead, such as Valued Tools of the Trade.

Ringo’s skills scale somewhat poorly with Skill Levels, meaning she can be a secondary priority to other units. Once you do train her, Anko Dango provides her with the best bang for her buck, due to its higher chance to grant an additional Level of Yang ATK Up than Mitarashi Dango, which should be the second priority. Goma Dango is left for last, as Yang ATK tends to be better value even for Slicing attackers.