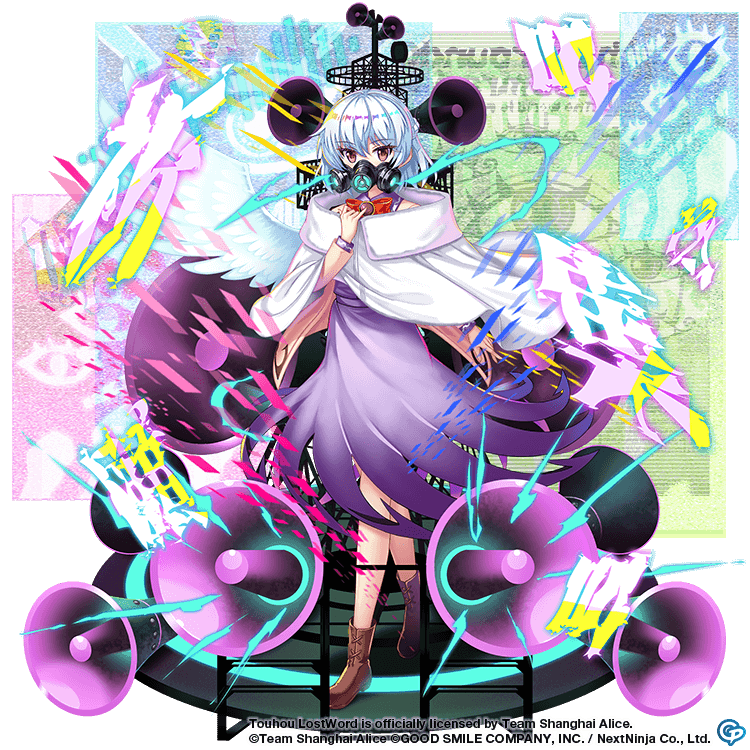 Truth Temple of Legitimacy and Integrity 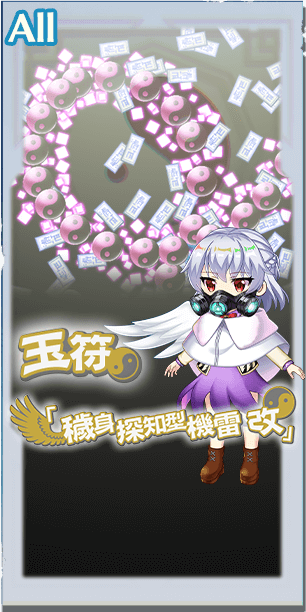 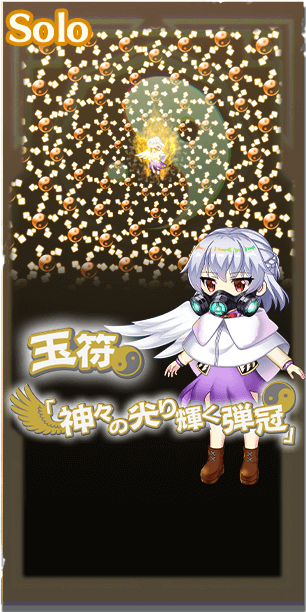 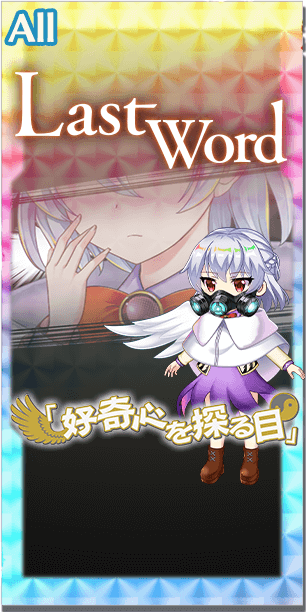 Universe B3 Sagume Kishin, Codename: Azusa, is a Lunarian divine spirit, leading political figure and protector of the Lunar Capital alongside Otohime (B3 Toyohime) and Kannagi (B3 Yorihime). Much like her universe L1 self, she has the ability to reverse a situation by speaking about it. If she were to speak about someone defeating her in battle, the reverse would happen. But the ability is very double-edged, as she can cause misfortune for herself and her allies if she does not choose her words carefully. However, in her B3 version, she wears a mask over her mouth which nullifies her ability. She is very strong as a divine spirit regardless, so she wears the mask in order to communicate succinctly without having the possibility of calamity brought upon by her words. Being on the level of the Watatsuki sisters, she is naturally an EX tier Friend.

For farming, Sagume keeps up with the best. Her Last Word, Curiosity Probing Eye, can do great damage with her killers and ability to reach 6 stacks of Yang ATK and Crit ATK on the first turn. Sagume can farm The Witch of Scarlet Dreams (2-7-1) if awakened, Mysterious Sword Master (3-3-3) at 8 SP, Puppeteer and Necromancer (3-11-1) at 8 SP, and a future story card stage at 8 SP.

Sagume truly shines in challenging content, where she acts as a swiss army knife. Her 1st skill, Basophil Orb, restores 1 barrier with a 50% chance to give 2 barriers and gives 3 stages of Yin and Yang DEF to the party for 3 turns. Her 2nd skill, Eosinophil Orb, is her main claim to fame with a whopping 1.0 P to the party, 3 stages of Crit ACC, and Quick to herself, the latter synergizing with her Last Word. Finally, her 3rd skill, Neutrophil Orb, gives the party 2 stages of Yang ATK, 3 stages of Yin ATK, and 3 stages of Crit ATK to the party for 2 turns. With a 6 turn cool down, her 2nd skill’s power support is a major boost to her teammates, but will usually only be used once in any given fight. Sagume’s 1st spell card, Orb Sign: Impure Body Detection Mines V2, gives the party 2 barriers, helping to augment its survivability even further. Her 2nd spell card, Orb Sign: Shining Shotgun Coronation of the Gods, provides 2 stages of Agility to the party for 3 turns and a party wide 0.75 P up. Her Last Word finally gives the team 2 stages of Yang ATK, 3 stages of Yang DEF, and 3 stages of Crit ATK to the party for 2 turns for additional utility. Her Last Word also deals great damage as it contains wide reaching killers like Youkai killer and both slicing and hard scaling. Her passives also give her some major boons with her 1st passive reducing damage against Youkai, 2nd passive healing barrier anomalies, and her final passive being a 50% barrier restoration. Thus, her survivability is helped somewhat despite her being fairly frail with herself giving focus down on her spell cards. With her Boosts and Grazes giving party wide Yang ATK and Accuracy respectively, Sagume’s utility and damage are all great for challenging content. One thing to note about Sagume though are her specular bullets. With her Yin bullets actually being mirrored to target enemy Yang defense, Sagume is easier to support. However, her damage may be lackluster towards enemies who have high Yang defense as a result.

Overall, Sagume is a jack of all trades, master of none. However, her support is so close to the best that she can trade blows with the best of the bunch at their respective buff. Sagume will enable your team to reach new heights by herself and while she may not provide any specific kind of support as well as more specialized friends, none quite sum it all up like her.

Here are the relevant scalings which Sagume has:

As with all characters, Spirit Power is always great to have on these characters and Sagume wants the power to break more barriers with her attacks. Alternatively, using A Curious Festival on her 1st spell card is a decent idea due to how hard it can hit. Finally, for stat filler, look for Yang ATK filler with a preference for Yang DEF.

With how many types of killers her Last Word has, World In Hands provides Sagume the best boost in damage with 2 stages of Crit ATK and a 25% boost energy bullets for her Last Word. Alternatively, Standing Behind You provides 1 stage of Crit ATK and a 30% to her Moon Bullets. Finally, Where the Wind Priestess Is serves as the best baseline when not fighting enemies that the killer bullets will crit. However, a future story card will come that gives her better damage than the options listed.

Sagume wants her 2nd skill raised up first. Her 2nd skill allows her to reach 2P on the first turn and thus use her barrier breaks to the fullest. After that, her 3rd skill should be prioritized to optimize her damage as it provides her with Yang ATK and Crit ATK. Finally, her 1st skill should be leveled to help with her Hard scaling on her Last Word.

+ High and versatile utility.
+ Great barrier breaks with paralysis breaks, blind breaks, and a decent spread of Metal and Moon.
+ Great damage all around.

- Cooldown on her 2nd skill makes it more of a one time use than a skill that actively supports the team.
- Team can become more fragile with self-inflicted Focus down on spell cards.