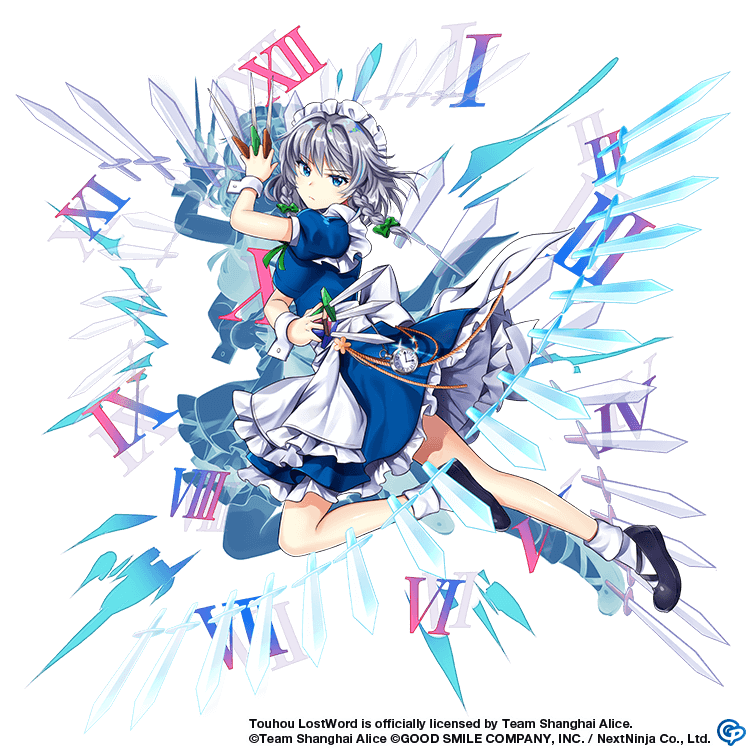 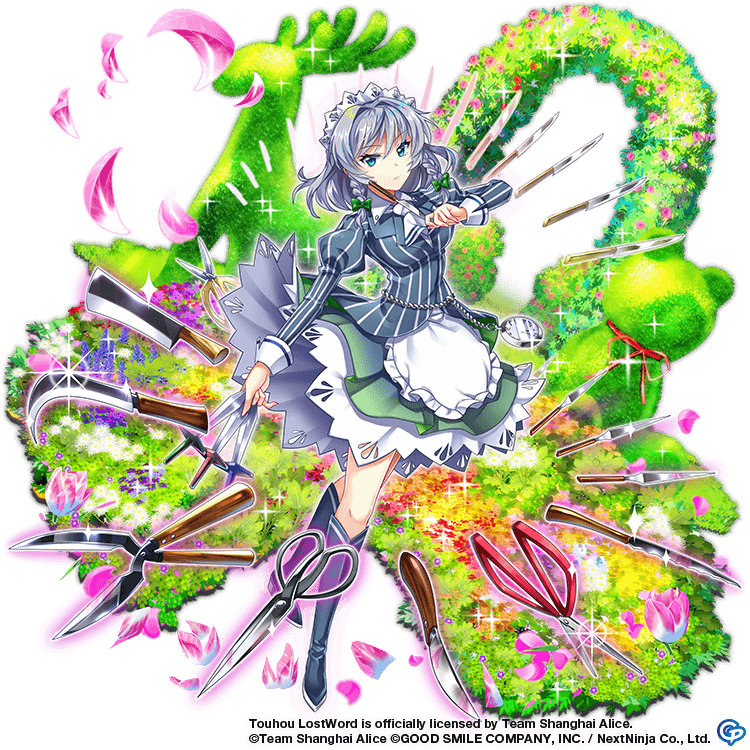 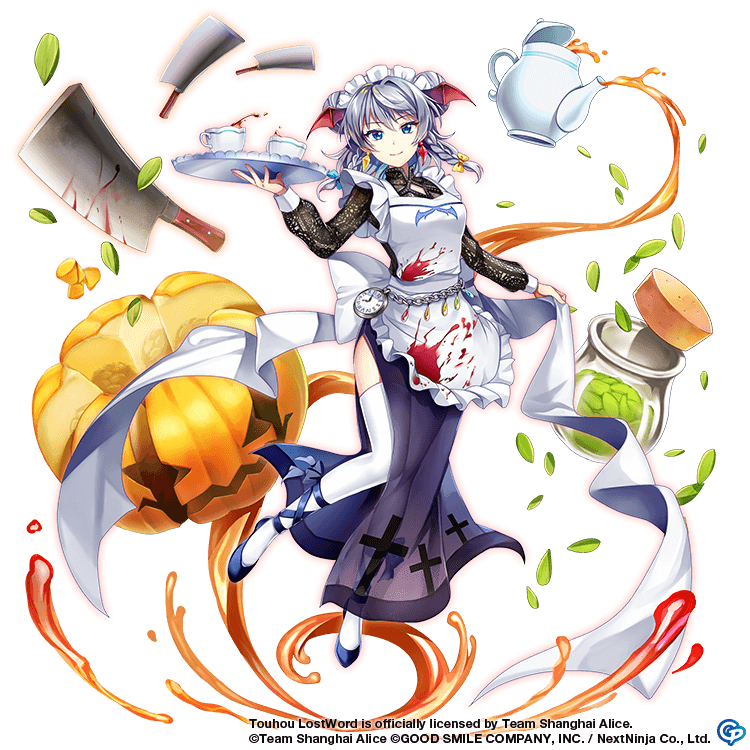 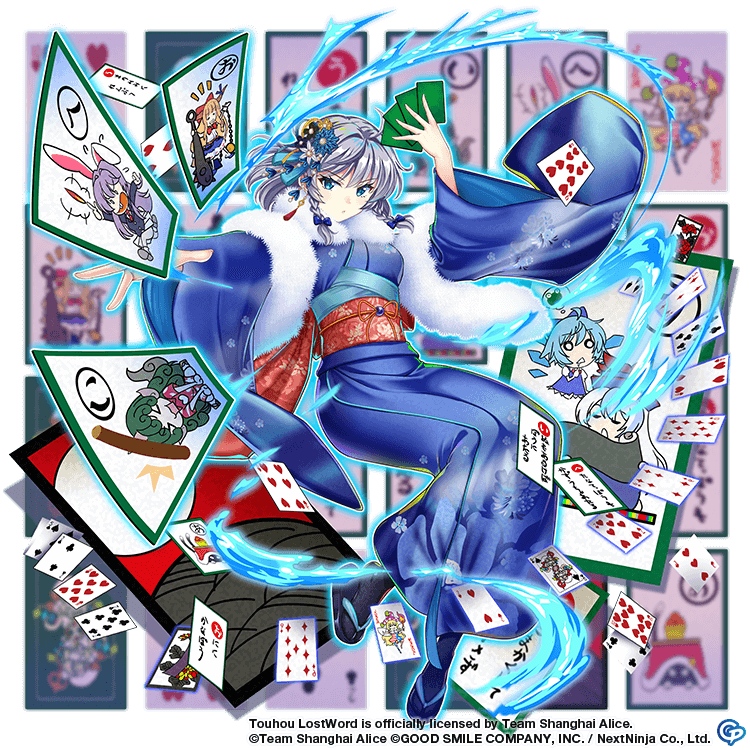 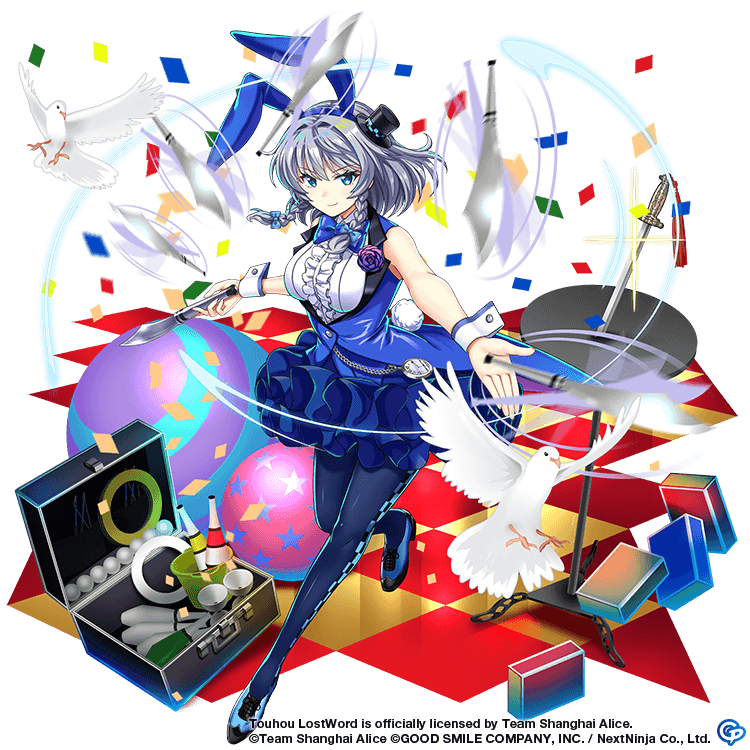 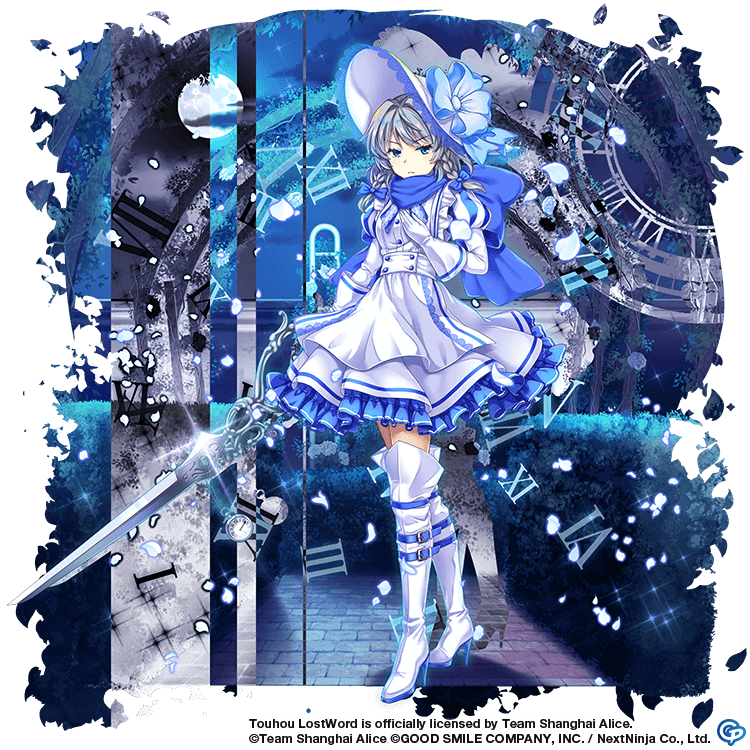 Sakuya Izayoi's Spread Shot. This bullet hell attack uses a silver blade that Sakuya received during a past incident. Its properties as a bewitched weapon have gradually faded after the incident was resolved, but it appears to be reproducing its properties in some way. Perhaps Patchouli is casting magic to help it. It was originally a prototype made by Shinmyoumaru.
Smart Robber

Sakuya Izayoi's Focus Shot. She throws her special knives at her target and steals something from them. As the name suggests, this attack makes one think of a robber, but why can a mere maid do something like this? 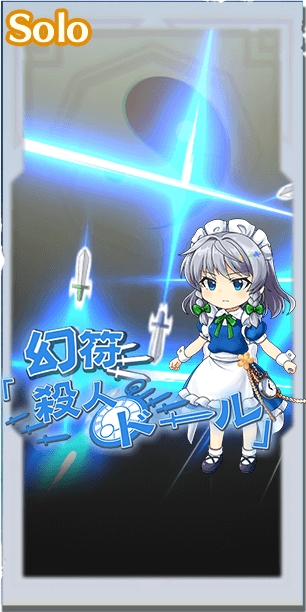 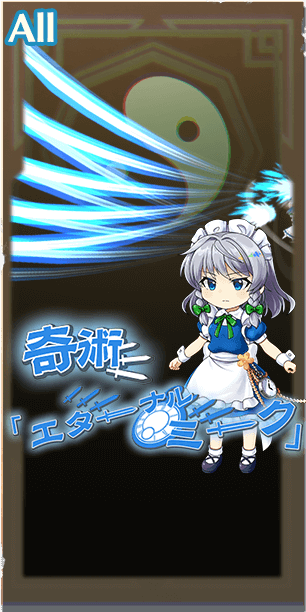 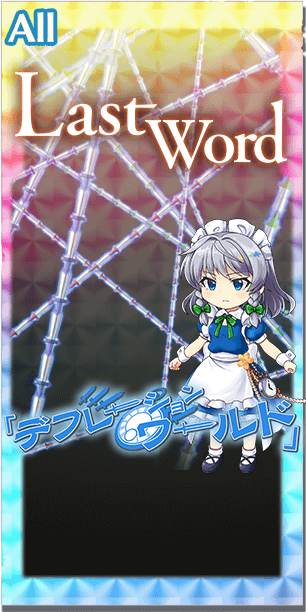 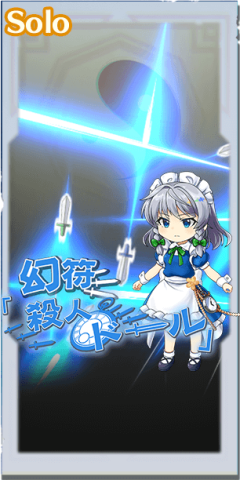 Sakuya Izayoi's Spell Card. Sakuya conjures up many knives in an instant and shoots them all out at once. She combines her ability to stop time with her knife techniques in an attack that is quintessentially Sakuya. Sakuya has many spell cards that might make you think of a certain killer, but any potential connection between the two is a complete mystery.
*Pre- and Post- effects assume max level. Effects per level can be viewed here.
Pre-Attack Spell Card Effects 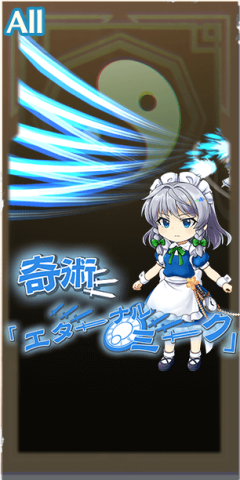 Sakuya Izayoi's Spell Card. In this incredible attack, Sakuya releases knives upon knives without using her ability to stop time. While she can use this Spell Card without using knives, she puts all her knives on display when she uses it here. This Spell Card is sometimes described as her last resort.
*Pre- and Post- effects assume max level. Effects per level can be viewed here.
Pre-Attack Spell Card Effects 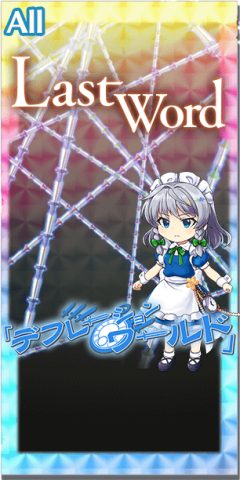 Sakuya Izayoi's Last Word. This bullet hell attack shrinks space-time and causes knives of the past and future to appear simultaneously in the present. Sakuya's unavoidable Last Word shows the maid's true power. Is this really the work of a human?
*Pre- and Post- effects assume max level. Effects per level can be viewed here.
Pre-Attack Spell Card Effects
None
Post-Attack Spell Card Effects
None

Nullifies the effects of Barrier Status: Paralyze.
When boosted, own Agility 1 level UP (1 turn).

Sakuya Izayoi was released on May 11th, 2021 as part of the starting roster.

Sakuya Izayoi is the deft Chief Maid who serves Remilia Scarlet, and acts as the head of the Scarlet Devil Mansion. Sakuya is in charge of maintaining all the happenings in the Scarlet Devil Mansion as well as supervising other worker's jobs, all while doing her own to the best of her ability. While rather pleasant and polite towards her mistress Remilia Scarlet, she is known to have a quick change of tone towards those she is not so considerate towards. Marisa Kirisame, for example, brings out a rather harsher side to Sakuya that can be noticed at a glance when speaking to one another. Despite being a human and the only human to live in the mansion, Sakuya is also know for being powerhouse. Sakuya has the unique ability to manipulate time. This means slowing down time, speeding it up, "erasing" time, and putting a stop to it all together. On top of all this our skillful maid can also "manipulate space". This translates into making rooms, which originally had space, even more spacious. This can also be used on top of time manipulation, aka "space-time manipulation". This ability has allowed her to accomplish feats such as making another version of her by creating a parallel universe. However, In Touhou LostWord, Sakuya isn't as fortunate, being placed in the ever-so-cold E-Tier.

When it comes to farming, Sakuya doesn't offer much of anything. Fitting to her lore, Sakuya's main skills in LostWord involve going really, really fast. In LostWord this niche is rather laughable, however, for two reasons. The first reason is that, as far as farming goes, your selected Last Words are going to go first anyway making all that added speed and priority useless in most scenarios. The second is that you're going to want your debuffers to act first, and not Sakuya, which in-optimally makes use of her already lacking damage.

Sakuya's attacks scale between Yin & Yang which severely hurts her overall damage due to her not having just one to focus on, making the previously mentioned "attacking before debuffing" flaw even worse. Sakuya's main use, while not being particularly overwhelming, and other than maybe a bit of extra damage, is her access to Metal element attacks. But even this is lacking as well; having a maximum of two on her first Spell Card, zero on her second, and two more on her Last Word.

Sakuya's position in LostWord is rather poor, not being particularly good at anything in specific, it's hard to find a time where using her is actually the play. And unless you could really use those Metal hits, you're usually better off opting for other units.

Here are the chances for Sakuya’s secondary effects, alongside her Slice scaling (per bullet):

Conjuring: Eternal Meek should always be equipped with a Story Card that gives Spirit Power or Yin ATK UP, due to its lack of elements and low damage. The best option for Spirit Power UP would be The Witch of Scarlet Dreams as it gives 2.00P immediately. You may also use budget cards such as Midnight Tea and It's Spring! as an alternative. For YIN ATK UP, the best option would be Overwhelming Firepower but you can make do with budget cards like Boo! if you lack the said card.

Stat sticks should have both Yin ATK & Agility if possible, but favor Yin ATK if lacking in story cards that provide both. One of the best options as stat stick is Ordinary Magician.

Mysterious Sword Master is far and away Sakuya's best option, and she is rather reliant on it for her current rating. You can give her Accuracy UP instead if you don't have this Story Card, but keep in mind her damage will plummet as a result.

With Sakuya you're going to want to prioritize her first skill,  Time Manipulation first for the 3 Yin attack up it gives. The added Quick prioritization it provides can also be useless in certain scenarios, but more often than not it doesn't change the result of her outspeeding your units anyway. Next up you should go for Loaded Knife next. This helps get Sakuya that much closer to P3 on her Last Word, which adds the second Metal hit onto the attack (However do note that Sakuya P2 uses Yang as her medium of attack, which goes against what Time Manipulation buffs.). Lastly, Agile Work, doesn't offer much of anything in terms of buffing for Sakuya. She's usually going to be outspeeding your team anyway. and in the even that she does using the added Agility, it isn't a gamechanger.

Sakuya Izayoi's Last Word. This bullet hell attack shrinks space-time and causes knives of the past and future to appear simultaneously in the present. Sakuya's unavoidable Last Word shows the maid's true power. Is this really the work of a human?
*Pre- and Post- effects assume max level. Effects per level can be viewed here.
Pre-Attack Spell Card Effects
None
Post-Attack Spell Card Effects
None