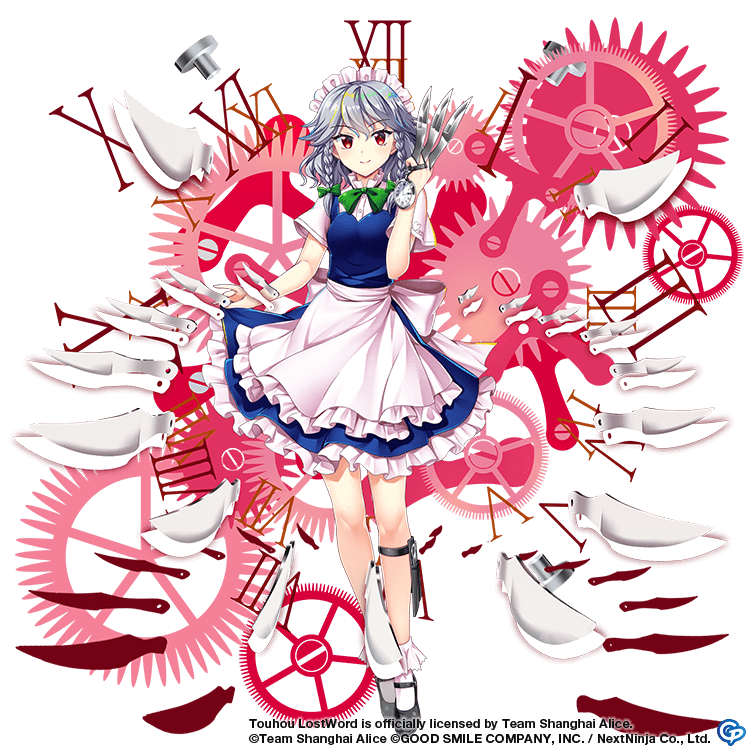 The Spread Shot of Sakuya Izayoi from the world shrouded in scarlet mist (a Touhou LW original). She throws out waves of knives that form lines in the air. It seems that Sakuya always recovers and reuses the knives that she so often throws as bullets. Does that mean she stops time, goes and collects the knives, then starts time again once she returns to her original position?
Illusion Actress

The Focus Shot of Sakuya Izayoi from the world shrouded in scarlet mist (a Touhou LW original). She throws knives in all directions. Sakuya's main profession is that of a maid, but she is also quite good at magic tricks. However, these ''tricks'' make use of her ability, so there isn't really any deception or sleight-of-hand involved. In fact, they seem a lot more like actual magic... 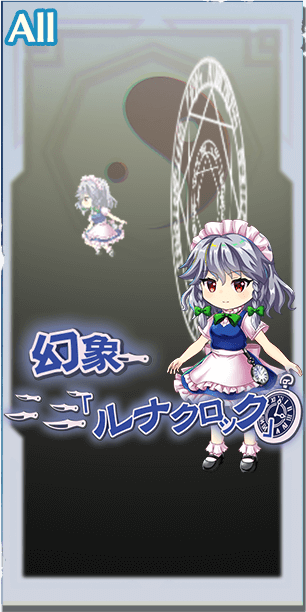 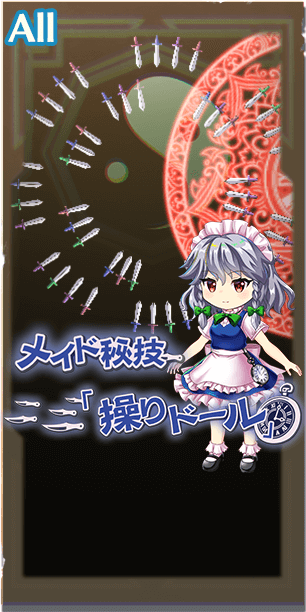 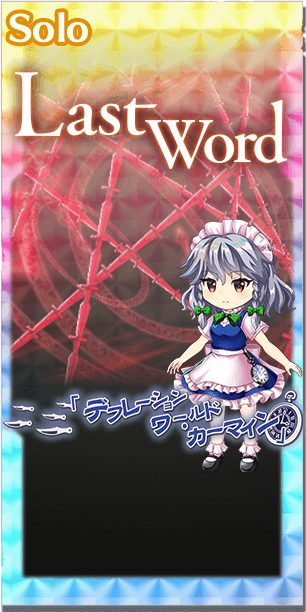 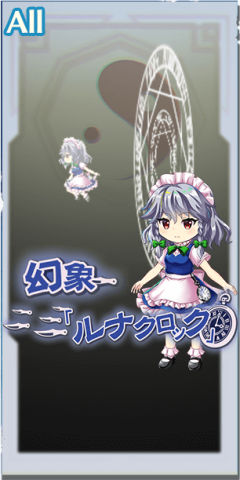 A Spell Card of Sakuya Izayoi from the world shrouded in scarlet mist. She positions knives while stopping time then sends them flying toward her opponents. This attack looks like magic, but it is actually a technique that makes full use of her ability. Apparently, Sakuya also uses her ability to complete her daily duties as a maid more efficiently.

It is possible to create a moondial by using the same principles as a sundial, but it is only accurate when the moon is full. Vampires attain the peak of their power on nights when the moon is full, so perhaps those are the only nights when they care about the time.
*Pre- and Post- effects assume max level. Effects per level can be viewed here.
Pre-Attack Spell Card Effects 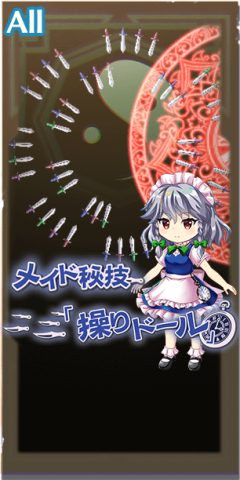 A Spell Card of Sakuya Izayoi from the world shrouded in scarlet mist. She positions knives while stopping time then sends them flying toward her opponents. This attack is one of many where she places knives when time is stopped. But it would be incredibly foolish to think these different attacks would become predictable since they all utilize the same trick. Maids serve others as a profession, so they would be out of a job if they failed to entertain. Sakuya's attacks may look like magic because of how precise and ingenious she is in positioning her knives. This precision is what makes her service and entertainment so perfect!
*Pre- and Post- effects assume max level. Effects per level can be viewed here.
Pre-Attack Spell Card Effects 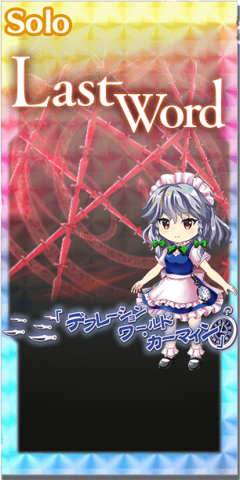 The Last Word of Sakuya Izayoi from the world shrouded in scarlet mist (a Touhou LW original). She throws knives at multiple different points in time simultaneously. This is Sakuya's Last Word that should not exist until after the Scarlet Mist Incident is resolved. The knives are crimson-red like blood―it is as if they are a condensed and solid form of crimson mist. They are also imbued with burning heat, which is perhaps a blessing from the vampire sisters who do not fear fire and instead wield it as a weapon. It could be said that a servant of devils who retains their humanity is, in fact, more unusual and mysterious than any shrine maiden or magician. This Spell Card that floods the space before her in knives of blood is perhaps symbolic of Sakuya as she is now. She herself takes great delight in how this attack can both cook and cut steak at the same time.
*Pre- and Post- effects assume max level. Effects per level can be viewed here.
Pre-Attack Spell Card Effects

A6 Sakuya Izayoi was released on January 3rd, 2022 in Festival: Maid of the Scarlet Night.

Sakuya Izayoi (Scarlet) is the head maid of the Scarlet Devil Mansion, in a world reflective of the first Windows era Touhou Project game, Embodiment of Scarlet Devil. Unlike Reimu and Marisa, who were humans aiming to resolve the Scarlet Mist Incident, Sakuya worked with her mistress to blanket Gensokyo in endless red fog. She will do anything for Remilia Scarlet, shown when she does combat with the incident resolvers upon entering the mansion. Not only was she a difficult opponent then, but she remains strong in Touhou LostWord as a S+ Tier Friend.

Sakuya keeps a cool head while farming with a similar Last Word to her original form: Deflation World - Carmine. The obvious differences are that every bullet line of this Scarlet variant is of the Fire element, along with the unfortunate fact that her Last Word is Solo-targeting instead of All-targeting. That doesn’t mean she holds back on power whatsoever, as the Yin DEF of her target is lowered by 2 levels to synergize with the Yin-only bullets of this attack. Additionally, her second skill, Instant Trap, gives an immediate 1 Spirit Power UP, which allows most of the bullets of her Last Word to be unleashed immediately, since the spread is 1-3-1.
Solo Stage Farms: 3-6-3

Where Sakuya truly shines is her utility within challenging fights, in which she reminds her opponents of her position as head maid. Not only does she increase her own Yin ATK by 2 levels with her first skill, Time Difference Trick, but the rest of the party gets 2 more levels of Yin ATK UP from her third skill, Swift Service. Along with her buffs come even more debuffs, most notably the Evasion DOWN by 3 levels to all targets from her second spell card, Maid Secret Skill: Manipulating Doll. Trapping the movements of every enemy will assist any evasive opponents encountered or improve the accuracy of other Friends. She can even boost her own Accuracy by 1 level for each Graze, if truly needed.

If that was not enough support, Sakuya’s final trick comes in the forms of amazing elemental Breaks. Both her Spread shot, Retrievable Knives, and Focus shot, Illusion Actress, are All-targeting attacks with 1 Metal break at 0P, making her a perfect choice for any foes weak to Metal. Her spell cards are nothing to underestimate either. Deflation World - Carmine was already mentioned with its 6 Fire breaks total, but her first spell card, Illusion Image: Luna Clock comes with 2 Fire, Metal, and Moon breaks when needed along with Maid Secret Skill: Manipulating Doll including 3 more Fire and Moon breaks. When considering that no bullet in her spell cards lacks an element, Sakuya proves to be a very reliable breaker for 3 different elements.

Sakuya has a lot of benefits going for her and she’s not afraid to hide them; from a highly-damaging Solo Last Word to her great assortment of elemental breaks to offensive team support. As expected from someone who would devote their life to their mistress, keep Sakuya close and she will certainly be a very strong Friend.

The chance for Stun on Sakuya's attacks are as follows:

Sakuya does not need much Accuracy support due to increasing her own Accuracy and decreasing opponents' Evasion. Spirit Power UP is always helpful so the other bullets and elements can be accessed from her spell cards. Otherwise, look for cards that will further increase her Yin ATK, either through direct buffs or stat sticks.

Sakuya’s Last Word has two rather appealing options. Since the attack consists of only Fire bullets, Bonds of Blood is a good choice with its 50% Fire power UP and a higher Yin ATK stat stick than Mysterious Sword Master. However, Mysterious Sword Master has 50% Slash Bullet power UP, also perfectly complimenting her Last Word, along with a small Accuracy increase if her self-Accuracy buffs and Evasion debuffs were not enough. Ultimately, you can’t go wrong with either card.

Every skill has their own upside to leveling them, but Instant Trap should definitely be maxed first for its immediate 1.0 Spirit Power UP, allowing for a much stronger Last Word. Afterwards, Swift Service is the skill that will more likely help overall, as it raises the Yin ATK of the entire party instead of herself. While the Charge of Time Difference Trick may help in certain scenarios, it is definitely more situational, especially when the Last Word’s Yin debuff goes last due to the Charge effect.