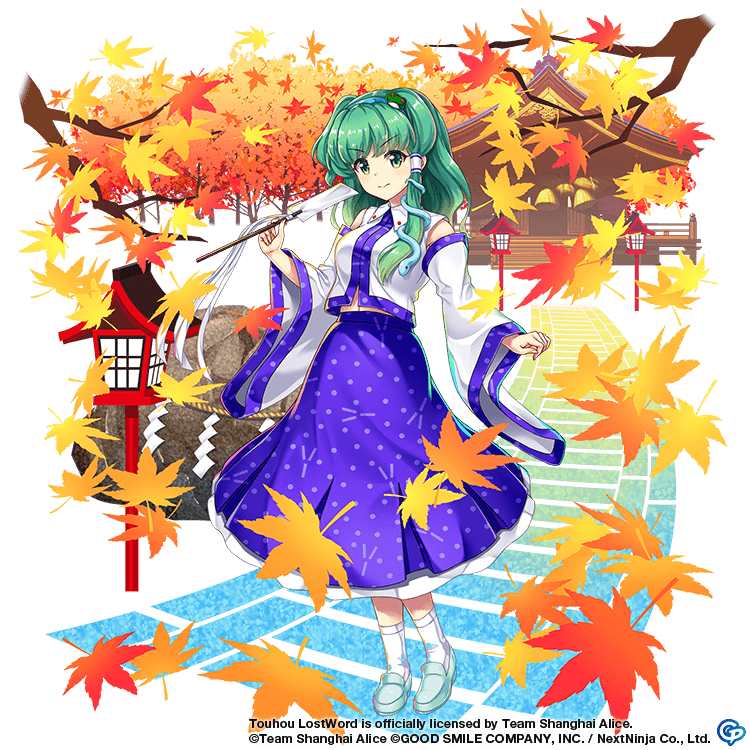 Deified Human of the Wind (Faith)

The Spread Shot of Sanae Kochiya from the world with squabbling gods on the mountain (a Touhou LW original). In this attack, she invokes ancient prayers. The prayer of the wind priestess can perform greater miracles the longer the chant. However, it is difficult to make time during a battle of bullets.
Preliminary Starfall Ritual

The Spread Shot of Sanae Kochiya from the world with squabbling gods on the mountain (a Touhou LW original). An attack where she prays for a wind of miracles. Since ancient times, shrine maidens and other Shinto priests are said to have predicted the future and performed desired miracles by reading natural ''traces.'' For example, throwing a die, reading the movements of the stars and the wind, and reading cracks in stones, trees, and tortoise shells. 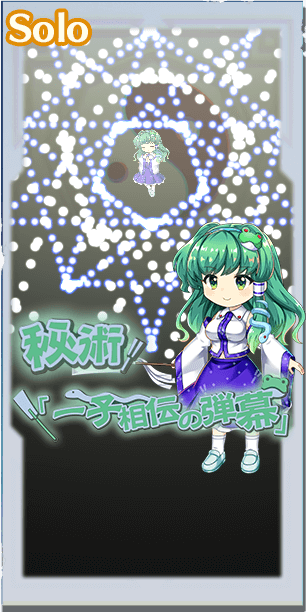 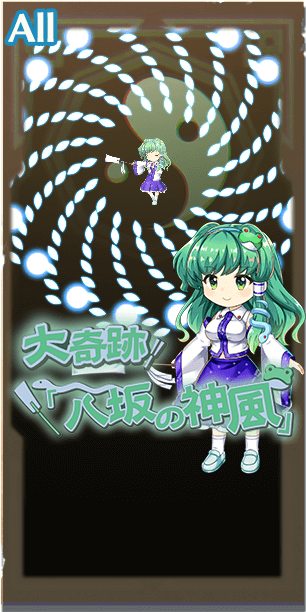 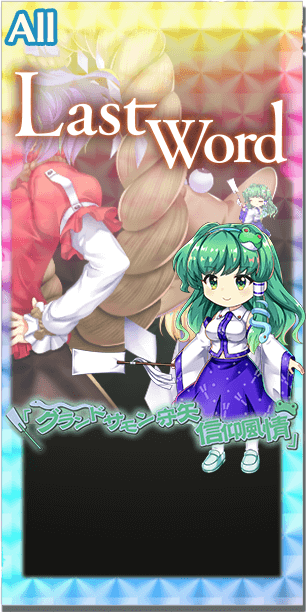 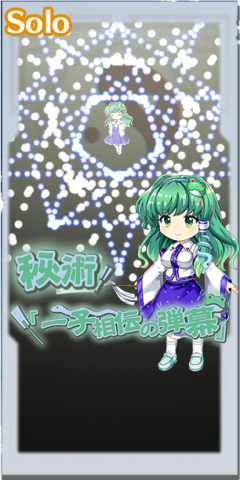 A Spell Card of Sanae Kochiya from the world with squabbling gods on the mountain. She attacks with a traditional Moriya secret technique that only Sanae has inherited. The details of this technique are unknown, but it has only been passed down to Sanae. Since Sanae came to Gensokyo, it is a tradition that has now ceased to exist in the outside world.
*Pre- and Post- effects assume max level. Effects per level can be viewed here.
Pre-Attack Spell Card Effects 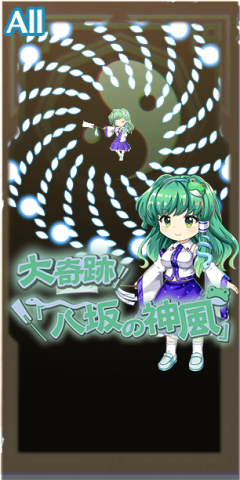 A Spell Card of Sanae Kochiya from the world with squabbling gods on the mountain. She uses Kanako's authority to attack with a divine wind. According to records, this divine wind has performed miracles. Hence, the Moriya Shrine has been worshiped by people in the outside world, and wind priestesses have probably been worshiped as living gods. The fact that people no longer rely on divine miracles may be seen as a sign that humanity has matured.
*Pre- and Post- effects assume max level. Effects per level can be viewed here.
Pre-Attack Spell Card Effects 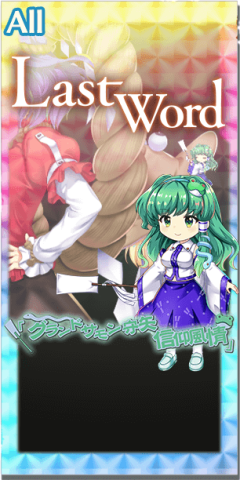 The Last Word of Sanae Kochiya from the world with squabbling gods on the mountain (a Touhou LW original). This attack recreates the miracle of entering Gensokyo. It is thought that Moriya Shrine was able to enter Gensokyo because Kanako carried out a plan to relocate to Gensokyo. But is it normal for the gods of the outside world to know of Gensokyo's existence...? Perhaps someone led them there. Further investigation is required to uncover this mystery. You would think that more gods would have come to Gensokyo if all the gods know about it...
*Pre- and Post- effects assume max level. Effects per level can be viewed here.
Pre-Attack Spell Card Effects

DMG to effective elements 20% UP.
When using Graze, party's Agility 1 level UP (1 turn).
DMG from resisted elements 20% DOWN.

A10 Sanae Kochiya was released on June 5th, 2022 in Festival: Wind of Faith & Mountain of Plates.

Sanae Kochiya is a human like Reimu and Marisa, but far from normal. She’s a descendant of Suwako Moriya, the Goddess of the Moriya Shrine, and therefore a Living God (in some small part), and the current shrine maiden of Moriya Shrine. Sanae and Suwako are not originally from Gensokyo, either; Sanae, Suwako, Kanako Yasaka and the Moriya Shrine originally lived in Suwa, Japan, but on Kanako’s suggestion moved both themselves and the entire shrine to the top of the Youkai Mountain in order to collect more faith, and thereby causing the events of Touhou 10: Mountain of Faith. Sanae’s ability, “to cause miracles”, has a wide range of useful applications and potential effects, albeit probably with some unintentional ones, due to the nature of miracles as a phenomenon. As a descendant of one of the most powerful Gods in Japan and no pushover in a battle herself, Sanae is a S-Tier Friend.

In terms of raw damage and power, Sanae can be relied on with her Yang-only Last Word, Grand Moriya Summon - Wind of Faith. Her Last Word consists of only Heavy type bullets and so, it can be easily supported by a certain farmable story card, not to mention that Sanae comes with 2 Accuracy UP from her second skill, Fantasy Preaching, which allows her to properly deal with adversaries. Add these up with YANG ATK buffs (2 levels from her first skill, Anti-Shrine Order, 2 levels from her third skill, Anti-Faith Barrier, and 2 more levels from when she uses her Last Word, Grand Moriya Summon - Wind of Faith) with some Agility buffs to be taken advantage of by her decent Slice scaling, this version of Sanae can definitely be a good choice for when you need a good nuker to set up with.

Sanae may not have much to offer in terms of party utility buffs, but she compensates for it through her elemental breaks. Starting off with 0P Star on her All targeting Spread Shot, Ancient Prayer Art, she will be able to shred enemies’ barriers without needing boosts, particularly if two or all of them share the same element. Her Focus Shot, Preliminary Starfall Ritual, is rather lackluster as while it may have 3 elements embedded on it (Water on 1.00P, Wood on 2.00P, and Star on 3.00P), all of them are only 1 bullet each. So there is a literal need to have high accuracy if you want to utilize this. Her first spell card, Esoterica: Secretly Inherited Art of Bullets, features a full combination of 3 Water and 3 Star elements, with all the Water elements being easily accessible at 1.00P. Her second spell card, Great Miracle: Yasaka’s Divine Wind, features a mix of 2 Wood and 2 Star elements, which starts off at 0P Wood. Lastly, her Last Word, Grand Moriya Summon - Wind of Faith, is a consolidation of 3 elements (2 Star, 2 Wood, and 2 Water) which you won’t usually use for elemental breaks unless you are certain that it will deal a finishing blow.

In the perspective of her skills, one can see that Sanae is a selfish buffer with some consideration to her party. Her first skill, Anti-Shrine Order, and third skill, Anti-Faith Barrier, both provide 2 levels of Yang ATK UP each, with Anti-Faith Barrier being party wide. The only other party wide buffs that Sanae provides is the 3 Agility UP buff from her first skill as well as the 2 Evasion UP from her second skill, Fantasy Preaching. However, this particular skill won’t be useful for the party on its own although it can be used as an extender for an already existing evasion buff. In order to further solidify her stand as a selfish nuker, Anti-Faith Barrier additionally provides 1.00 Spirit Power UP and 1 barrier for herself which allows her to access the majority of her bullet lines. To make sure it’s consistent, Fantasy Preaching also provides herself with 2 Accuracy UP, and just like this, you will be certain that she can properly nuke using her Last Word, Grand Moriya Summon - Wind of Faith.

Overall, this version of Sanae is certainly a generic nuker with some capability in supporting the team mainly through some elemental breaks with a small amount of party utility.

The secondary effects and scalings of Sanae’s attacks are as follows:

Witch of Scarlet Dreams is famously good on just about anyone hungry for some Spirit P UP, is infinitely farmable, plus in Sanae's case she benefits greatly from its stat filler, with Agility and Yang ATK being her primary stats. Moriya Anniversary (or a more budget option like it in Rabbit of Good Fortune) can be used if you really want to maximize Sanae's Barrier restore to keep her going for long fights. but If you just want good stat sticks for your Spell Cards, Undercover Reporter gives a lot of Agility and Yang ATK while also boosting the Wood bullets Sanae has.

Secret God of the Sky is Sanae's highest damage card because of its incredibly high boost to Heavy bullets, which Sanae's Last Word is composed of entirely. Not to mention that the card is farmable, much like Witch of Scarlet Dreams. Myouren Temple Anniversary is a close second, but the card is more limited and generally harder to get (although it isn't gacha at least). Secret Sealing Club Girls isn't half bad either and is also farmable, but you're better off just farming Secret God of the Sky, unless you already have Secret Sealing Club Girls lying around.

Start with Anti-Faith Barrier, as it has Spirit P 1.00 UP, which is universally good on just about every Friend, Party wide Yang ATK UP, and some Barrier restore to keep Sanae alive longer in extended fights. Anti-Shrine Order should go next as it's very low cooldown, more Yang ATK for Sanae and party wide Agility UP, considering you are probably using Sanae in a speed-based team to best play off of her strengths. If you're not using her in a speed based team though, it's a toss up between Anti-Shrine Order and Fantasy Preaching and up to you to decide.

- Squishy without Barrier
- Unfocused team support, with only a couple levels of Party's Agility, Evasion and Yang ATK UP throughout skills