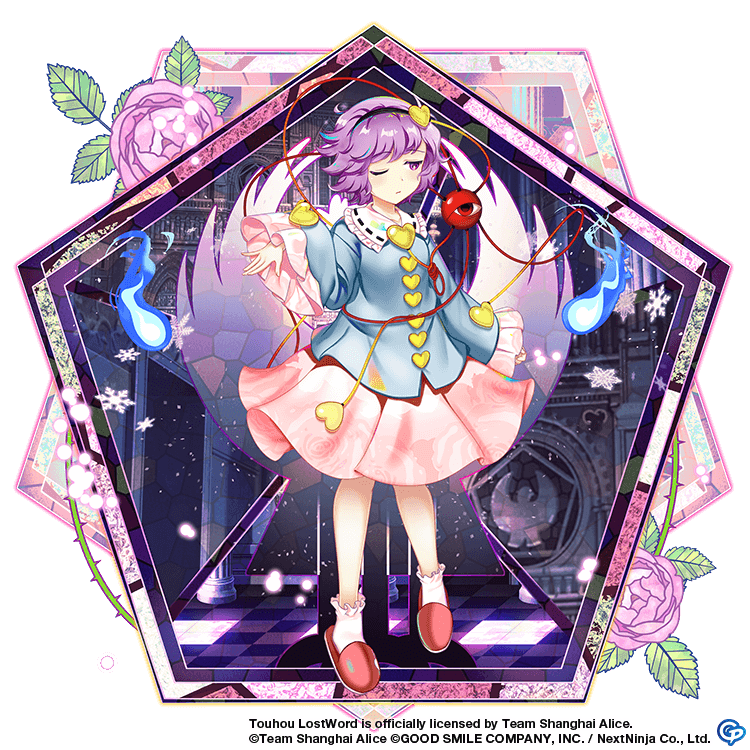 The Girl Even the Vengeful Spirits Fear (Subterranean)

The Spread Shot of Satori Komeiji from the world of restless Underworld vengeful spirits (a Touhou LW original). She reads her opponents' minds in this attack. Do you think mind reading is possible? It most certainly is. However, the way Satori reads minds is probably different from what you may expect. She will read your mind even if you don't want her to.
Mind Test

The Focus Shot of Satori Komeiji from the world of restless Underworld vengeful spirits (a Touhou LW original). She tests her opponents' minds in this attack. A famous detective novel author became engrossed in the study of spiritualism, and a famous natural philosopher devoted their last years to studying alchemy. Do old humans who have mastered an intellectual discipline always stray from the path? No, they don't. There is a vast unknown world that only they can see! 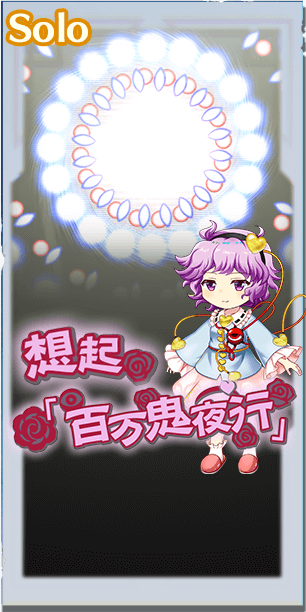 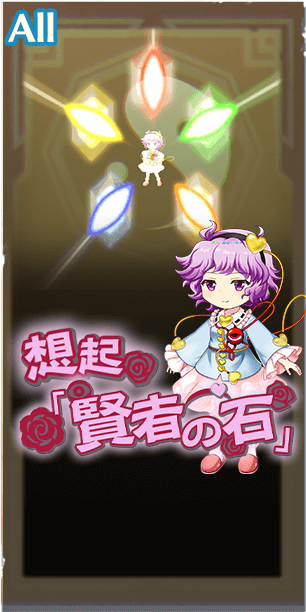 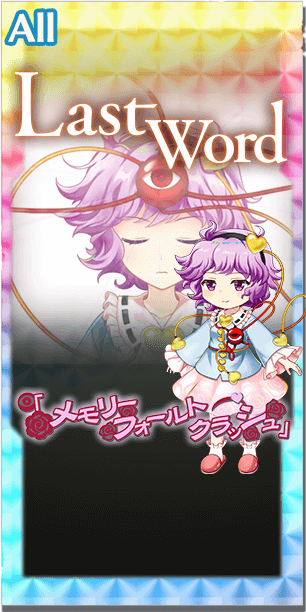 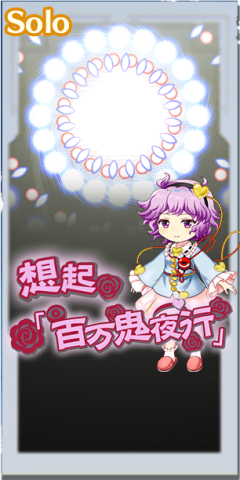 A Spell Card of Satori Komeiji from the world of restless Underworld vengeful spirits. She attacks with a bullet pattern taken from memory. Have you ever seen an oni shoot bullets? An entourage of smaller oni follows the oni chief, and if you look closely, those smaller oni are miniaturized versions of the chief... It's terrifying. This sight probably terrorized the capital of Japan in the past. These fearful memories have surely been ingrained into the DNA of the Japanese people.
*Pre- and Post- effects assume max level. Effects per level can be viewed here.
Pre-Attack Spell Card Effects 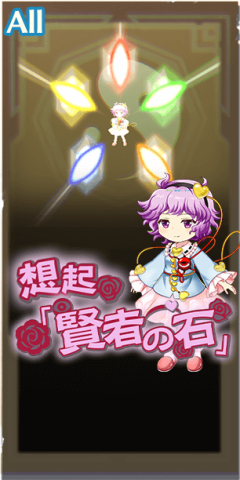 A Spell Card of Satori Komeiji from the world of restless Underworld vengeful spirits. She attacks with a bullet pattern taken from memory. The philosopher's stone is one of the ideals that scholars of magic strive for. The philosopher's stone is a medicine of true immortality, complete knowledge incarnate, the ultimate element, and the devil's fruit that leads to god. It is an ideal because it can never be attained. In other words, it is a concept, not a material substance. It exists through memory, which means there is no way to discern a fake philosopher's stone from the real thing.
*Pre- and Post- effects assume max level. Effects per level can be viewed here.
Pre-Attack Spell Card Effects 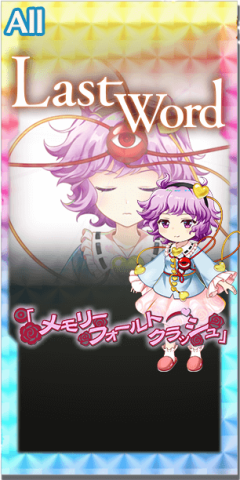 The Last Word of Satori Komeiji from the world of restless Underworld vengeful spirits (a Touhou LW original). She causes an error by contradicting her opponents' memories. Memory is the reality of the past. Thus, altering memories alters the past. If a memory is inconvenient, you can change it as many times as you like. But what should you do if there is a discontinuity? The brain―the machine may suffer if it doesn't cease the operation and produce an error message. This is because the brain is made up of strata that provide evidence for the history accumulated by living beings.
*Pre- and Post- effects assume max level. Effects per level can be viewed here.
Pre-Attack Spell Card Effects

The Mistress of the Palace of the Earth Spirits (try saying that three times without getting tongue tied) has always been a somewhat unapproachable youkai, with her ability to read minds causing conflict and unease in those that she encounters. Unlike her sister who closed off her Third Eye in order to better get along with those above ground, Satori has embraced her namesake; a Satori youkai whose abilities are currently paying off in her sleuthing duties towards a certain incident currently still in progress (see Cheating detective Satori). Going right back to her roots comes her classic variant from the A11 world, whose latent abilities to tell others exactly what runs through their heads manifests in a powerful Technical Friend who sits cleanly at S Tier on the tierlist.

Let’s talk farming. Satori can buff both her Accuracy and Spirit P with her second skill, Optical Illusion which allows her access to a respectable amount of firepower on turn 1. Her backloaded Last Word does mean that she would need an additional turn to setup, making her more ideal for longer battles.

Incidentally, longer battles are where Satori excels. Her first Spellcard, Recollection: Night Parade of a Million Demons benefits her team by boosting Accuracy 1 level up for 3 turns. Her second Spellcard,  Recollection: Philosopher's Stone boosts team Crit ATK, which is then further bolstered by her Last Word, Memory Fault Crash which increases team Crit ATK while debuff the enemy team’s Yang DEF and Crit DEF. These work in tandem with her 3rd skill, Confirmation Bias which lowers Crit DEF and Crit EVA by up to 3 levels, leaving enemies ripe for the plucking.

Satori is also no slouch when it comes to barrier breaks, boasting the ever useful 0P Water break on her Focus Shot. Her Spellcards are somewhat divisive, provide a single target 3 Metal and 3 Fire breaks on her first Spellcard. Her second Spellcard spreads out across a veritable Philosopher’s Stone worth of elements, hitting Earth, Fire, Water, Wood, Metal and then Earth against on her 3P bullet line. Her Last Word has the unique distinction of laying 3 Fire and 3 Water breaks, backloaded towards all 3 Water lines being accessible only at 3P.

Speaking of barrier breaks, Satori also brings freeze anomalies into the mix, laying them down on both her 3rd skills, her Spread Shot and her 2nd Spell Card as a post effect. She can then choose to break these with either her Focus Shot (as at 2P) or her Last Word at 3P. While she cannot set them, she is also able to break Burn and Paralyze barriers with her Spread Shot and Last Word respectively, should the situation demand it.

Finally, Satori also has minor defensive capabilities, with her first skill’s ability to recover 1 barrier for the entire team when used, as well as applying 2 levels of Yin DEF up. Her 3rd passive also gives her a 50% chance of naturally recovering a barrier, making her a tank to be called on in a pinch. Of minor note is that her Last Word will also guarantee a stun on all enemies if fired off at 3P, useful for staving attacks off against any units that avoid being full broken that turn.

Satori from the A11 world brings a lot more to the table compared to her L1 counterpart. Point her at the enemy team, and she’ll lay them mentally bare, every thought laid out before them. That sort of mental damage is sure to leave a lasting scar on any opponent.

As always, The Witch of Scarlet Dreams provides Satori with the ability to access all of her elemental breaks, as well as her Freeze breaks present at 3P of both her 1st Spell Card and Last Word.

As an attacker with a focus on Crit damage, Satori also excels with the Miracle Mallet in her hands, setting her up for bigger numbers down the line.

Worlds in Hand currently stands as one of the best options her Satori, providing a 30% boost to Energy type bullets, of which makes up 100% of her Last Word, as well as a 25% boost to Fire which helps with the first half of her bullet lines which are fully accessible at 2P. This card also further synergizes with her ability to boost Crit damage by further increasing party Crit ATK levels to staggering heights. As an alternative, Unknown Barrier Team provides a flat 50% boost to Energy Bullets, making it a reliable pick if you already have Crit damage covered, or want to focus on more than just Fire damage.

Prioritize Satori’s second skill, Optical Illusion in order to get her to 2P on turn 1 while boosting her Accuracy and Yang ATK to build on her consistency. After that, go with her third skill, Confirmation Bias which debuffs the enemy team’s Crit Defense and Crit EVASION while also debilitating them with 2 Freeze barriers, perfect for a helping of slow or as a setup to setup an anomaly break. Finally, look at her first skill, Common Sense for a defensive option with a teamwide Barrier recovery as well as boosting Yin DEF up by 2 turns.