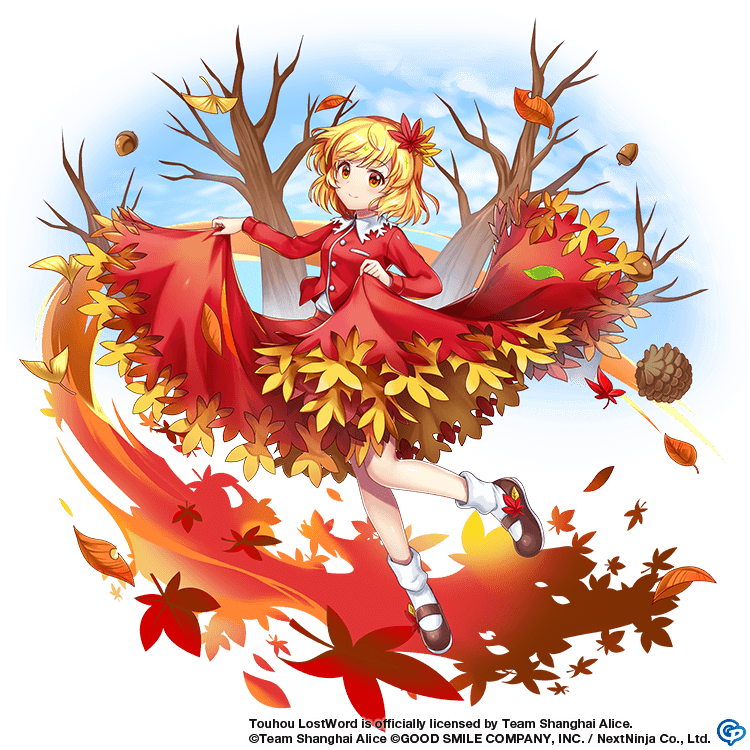 Symbol of Loneliness and Demise 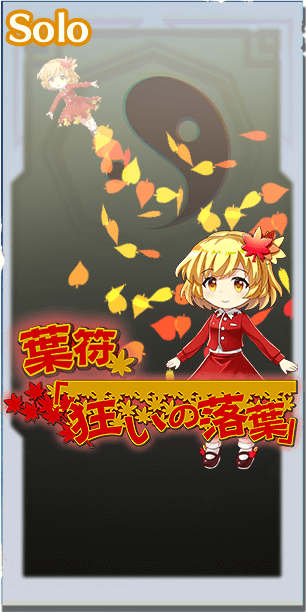 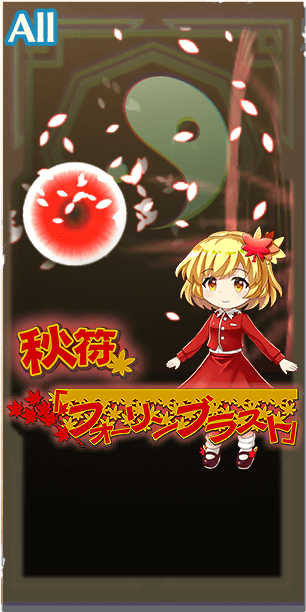 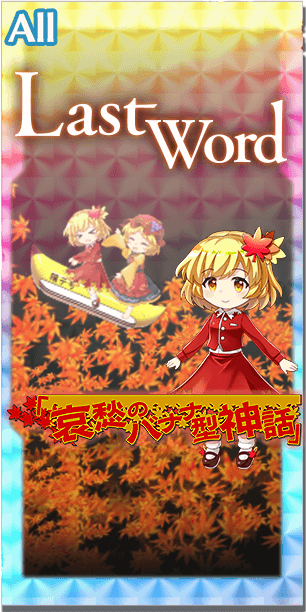 "I hate it went winter comes around to ruin my hard work, w-wait no not you too!"

Shizuha Aki, Minoriko Aki's older sister, first made an appearance in the series in Mountain of Faith as a stage 1 midboss. Shizuha is the goddess of autumn leaves and has the ability to control the turning of leaves. Together with her sister, Shizuha basically controls the entire season of autumn. In a comedic way, Shizuha doesn't actually use any supernatural powers to turn the leaves of autumn red and rather paints over them which explains the slight color inconsistencies you find in these leaves. She takes great pride in what she does and enjoys showing her work to her sister, as a result of this, Shizuha hates when winter eventually comes. In Touhou LostWord, Shizuha plays the role of a support, and can provide some nice buffs for your team which places her comfortably into B Tier.

For farming Shizuha can at least throw out a solid punch, but unfortunately the mixed damage of her Last Word and her not-quite-adequate Accuracy results in a slightly inconsistent and weaker farmer than most. Make sure that on the first turn you use all three of her skills, and a Yin ATK UP Story Card on Autumn Sign: Falling Blast - turn 2, use, The Sorrow of the Banana. As her Accuracy UP buff only lasts two turns, she must do this precise order to avoid a low roll on Autumn Sign: Falling Blast; if not enough hits connect, she will not have the Spirit Power required to use her Last Word with 3 boosts.

Like previous mentioned Shizuha has an array of tools to help support her teammates. Shizuha is able to grant her team 0.8 P UP and herself a full 1 P UP at max level, as well as provide team-wide accuracy and dodge support using her second skill. Shizuha is unique in this sense, being the only unit with the ability to grant her entire team with more P. The ability to do so, paired with her team-wide accuracy support is definitely what sets her a part from the average buffer. In addition, Shizuha can grant her team Yin attack, Yin defense, and more dodge support with the rest of her Spell Cards. She can also guarantee an Electrified Barrier using her first Spell Card. Shizuha also has a quite a bit of elements to work with in the form of Metal and Wood. She has 3 Wood breaks on her first Spell Card and 3 Metal breaks on her second Spell Card, all going up 1 in count as her P count goes up. Her Last Word has 2 Wood and 4 Metal, gaining the last 3 metal at P3.

Like previously mentioned, the ability to provide team-wide P support is Shizuha's greatest trait and makes her quite a reliable support to have handy when you need her.

Here are the chances for Shizuha's secondary effects, alongside her Hard scalings (per bullet):

For farming, Shizuha should use a Yin ATK UP story card on Autumn Sign: Falling Blast and then immediately use her Last Word the next turn. Otherwise for harder fights, look to whatever mix of Yin ATK UP, Spirit Power UP, and Accuracy UP is required to get the job done. For fillers, look to Yin ATK - Yang ATK simply is not worth bothering with, outside of scenarios where you're babying Shizuha for maximum damage at the expense of practicality.

In the vast majority of scenarios, the mix of Wood DMG UP and Yin ATK UP that Overwhelming Firepower provides is Shizuha's best bet - you'll simply have to accept the small degree of variance that it comes with. If you're extremely risk adverse, Froggy Hat will sometimes suffice with its Accuracy UP and Liquid DMG UP.

Shizuha's third skill, Autumn Poem, is priority number one without a doubt. The ability to grand team-wide P support is very useful and you're going to want to max this ability with her ASAP. Next you're going to want to level up Autumn Wind to at least level 8 as the 50% chance to increase 2 levels of accuracy is very helpful. Lastly, Single Leaf should be upgraded to it's max, the extra P for Shizuha helps makes use of her good elemental coverage.

Chaldea Boys collection 2023 NA banners
I am trying to get Napoleon and NP3 Ody for next year’s boy’s collection NA. Will they…
Odysseus with Castoria
(topic deleted by author) 1 post - 1 participant Read full…
Is mana loading append skill universally useful? Do I unlock it for all my servants?
It fits quite perfectly for servants with 30% self-charge (like Godjuna). Allows you…
What are the Servant(s) you got in the first free 10 roll. Also what was your first 5*
It’s a question that has been brewing in my head for a while, so here we are. This…
Busti’s Stall Diary Chapter #505: Sus Men ; Dual Rivalry
Time for another chapter and this time, I’ll give honor to the Sus Man and Genius in…
Read More